You are here: Home / Featured / The Sydney container terminal and crazed right-wingers: the Polish nationalist connection

Clarification: On May 9, 2019, the Halifax Examiner published a column entitled “The Sydney container terminal and crazed right-wingers: the Polish nationalist connection” that referred to Mr. Barry Sheehy’s role as a consultant to the Sydney Harbour Investment Partners.  The column was critical of the proposed container terminal planned for Sydney Harbour as the author of the column does not view the plan for the terminal to be realistic.  For this reason, the author is also of the view that the payment of funds to further the planning or development of the container terminal plan is not wise.  The column included a paragraph that compared Mr. Sheehy to Paul Manafort.  The comparison to Mr. Manafort did not relate to the conduct for which Mr. Manafort was criminally convicted and the newspaper would like to clarify that it did not intend to suggest that Mr. Sheehy has engaged in fraudulent conduct or any criminal conduct.

The Examiner followed testimony in the case, here.

It was a very long decision, taking Brothers about two hours to read yesterday. Brothers detailed the many inconsistencies of both Jackson and his accuser, whose name is protected by a publication ban. Haley Ryan was there for StarMetro Halifax, and her report gets into some of those inconsistencies.

As I understand it, the gist of Brothers’ decision is that the timeline offered by the student simply didn’t stand up, given the seemingly conflicting evidence of cellphone records.

I don’t have time to get into it this morning, and I’ll wait for the written decision to be published anyway, but in the end, said Brothers, “it’s not enough to think that [Jackson] probably did it; it needs to be proved beyond a reasonable doubt.” Given the possibility of a wrongful conviction, she said, she was obligated to find Jackson not guilty.

Clarification: On May 9, 2019, the Halifax Examiner published a column entitled “The Sydney container terminal and crazed right-wingers: the Polish nationalist connection” that referred to Mr. Barry Sheehy’s role as a consultant to the Sydney Harbour Investment Partners.  The column was critical of the proposed container terminal planned for Sydney Harbour as the author of the column does not view the plan for the terminal to be realistic.  For this reason, the author is also of the view that the payment of funds to further the planning or development of the container terminal plan is not wise.  The column included a paragraph that compared Mr. Sheehy to Paul Manafort.  The comparison to Mr. Manafort did not relate to the conduct for which Mr. Manafort was criminally convicted and the newspaper would like to clarify that it did not intend to suggest that Mr. Sheehy has engaged in fraudulent conduct or any criminal conduct.

The proposed Sydney container terminal is simply a fantasy. There’s no business case for the enterprise, as the supposed geographic logic is absurd, and even if it weren’t, it would cost a few billion dollars to build the thing, and then another billion dollars or so to build the required rail and highway links. No private corporation is going to spend that kind of money, and even the various governments aren’t going to spend it.

That doesn’t mean there isn’t money to be made from studying and planning for the terminal that will never exist, and Mary Campbell of the Cape Breton Spectator is doing an excellent job chronicling the various grifters and shills benefiting from public money thrown at the fantasy.

This week, Campbell uses a Cape Breton Post article as a jumping off point for examining two of those characters. On Sunday, Chris Shannon of the Post reported:

All is quiet publicly on the port file and Albert Barbusci apparently likes it that way. The CEO of Sydney Harbour Investment Partners (SHIP) is working with port marketer Barry Sheehy to secure the business required to move ahead with the construction of an international container terminal north of the Sydport Business Park.

On Monday, Campbell wrote about Barbusci, and we weirdly visit a couple of “adventure parks” in Florida and learn that Barbusci golfs more than Donald Trump. Campbell is her usual hilarious self, and it’s a good read. 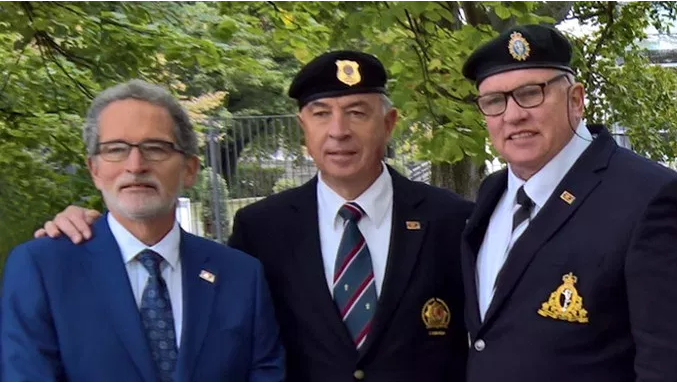 More disturbing, by far, is a piece Campbell published yesterday about the other half of the pair: “No Port News Dept: Where’s Barry?”:

I know that Barry Sheehy was in Warsaw last fall because his trip was captured on video. Thirty-plus minutes of video, posted by the Sheehy brothers’ traveling companion and guide, Aleksander Rybczyński, editor of the online magazine Polska Canada, who published an account of their adventures on January 23.

And not only was Sheehy in Warsaw last October, he was there in military dress (he’s a former member of the Canadian Air Force) as was his brother Matt and for a dizzying moment I thought their “mission” might be to annex Poland to Gabarus.

But no, he and his brothers (the one in civvies is Paul) — Irish Canadians, all — were there to honor the “250,000 Polish airmen, seaman soldiers and scientists” who played “such a decisive role in winning the Second World War.”

Oh, and they were there to dog whistle.

And boy, can they dog whistle.

Campbell goes on to give us a tour of far-right Polish nationalism, the Polish government’s criminalization of speech that documents Poles’ involvement in the Holocaust, and Sheehy’s support for ultra-nationalism and anti-Islamic sentiment.

…I do feel it necessary to call Sheehy out on his dog-whistle tour of Poland, not only because I don’t agree with his ideas (although that’s part of it) but also because this is not the way serious consultants behave.

Serious consultants tend to keep their more controversial views to themselves for fear of alienating potential clients.

A serious port developer hoping to do business with, say, Egypt, a 90% Muslim country, would probably save all that “gates of Vienna” stuff for his favorite racist sub-reddit.

I’ll go further. Much of the far right is a permanent grift. Rebel Media is a lot of horrible shit, but at base it’s an instrument for lifting money, and a lot of it, from the gullible. There is a wingnut welfare circuit of think tank fellowships and book publishing that every disgraced politician or “personality” can tap into after their terrible deeds have been documented and called out. And, the more savvy of the kind have learned to position themselves as middlemen and consultants to right-wing politicians, even if they can offer no actual services.

Paul Manafort is the epitome of this sort of worthless middleman, and it looks like Barry Sheehy is a pale reflection — Sheehy isn’t a top tier grifter like Manafort, but there’s still money to be made by inserting himself as a “consultant” for Conservative politicians like Cecil Clarke in tiny Cape Breton, never mind that there’s no actual product or service to be offered. 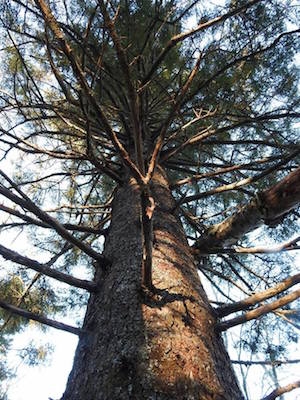 A group of Annapolis County people concerned about logging are noting a stand of very large trees in the area between Corbett and Dalhousie Lakes, just seven or eight kilometres from the town of Bridgetown.

Logging in the area began last year, but a larger cut is proposed for this season.

“Yesterday (Sunday), a few of us visited the Corbett-Dalhousie Lake forest to measure trees and take photos,” writes Bev Wigney in a letter to Premier Stephen McNeil:

One of our group, experienced in forest biology, counted tree rings on a few of the stumps that were cut last autumn before work ceased for the season. These were not even the largest diameter trees and most aged over 100 years up to 138 years for an American Beech. There are far larger and probably much older trees in the next “strip'”of forest that is slated to logged when work resumes any day now. Just in the first few metres beyond what was harvested last autumn, there are two immense Yellow Birch measuring 30 and 32 inches DBH (diameter at breast height)….

We have been told by Minister Iain Rankin that this forest doesn’t qualify as “Old Growth” so cannot be preserved in its natural state. It will be “managed” to create a multi-age forest. 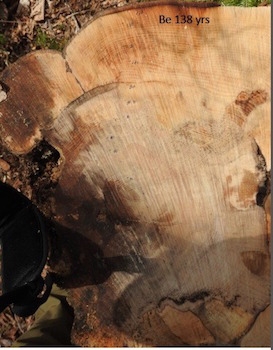 David Patriquin has been chronicling the fight to save the Dalhousie-Corbett Lakes trees, here.

Yesterday morning, I wrote about “a rather pointed (even for cops) press release” related to an RCMP raid of the Timberleaf cannabis dispensary, noting among other things that:

The claims made in the press release have not been tested in court. I’m particularly wary of the financial figures and valuations of product that police claim in such releases.

Yesterday afternoon, the RCMP walked back the release:

Last evening, Nova Scotia RCMP issued a media release regarding the search and seizure at a cannabis storefront in Timberlea on May 6. The release included references and opinions that are outside of the scope of Nova Scotia RCMP. We have taken measures to address the liberties that were taken in the release and apologize for the confusion it may have caused.

The first news release sent out stated Halifax RCMP officers raided an illegal cannabis business in Timberlea, N.S., on Monday and seized $60,000 worth of pot and other marijuana-related products, “some of which were marketed toward children.”

In the second release, there is no mention of the value of the product seized or any potential dangers to children.

[RCMP Cpl. Lisa] Croteau looked at some of the seized material. She said about half of it was cannabis edibles and about half of those edibles were the blocks that resembled Lego. Croteau said the labelling on the blocks said they had 250 milligrams of THC. The original news release said the dosage was 500 milligrams.

“It looks just like a gummy,” Croteau said. “It’s not very big. It’s like the same size as a Lego block. It’d still be very concerning.”

The corrected release said just one man is facing charges and the owner of the building in which the business was housed was given formal notice to end the lease agreement with the operator.

In the initial release, RCMP said since Jan. 1 the cash-only business made almost $1 million, but spent just $50,000 without paying any tax. There was no mention of the amount the business made in the second news release.

Something I learned about cop press releases long ago: claims about drug profits and the valuation of drugs are always overstated. It’s like a rule of physics, immutable: E=mc2 and cops exaggerate drug profits.

Neurodegenerative eye and brain diseases: Where do we go from here?(Thursday, 8:30am, Bethune Ballroom, Bethune Building, VG Site) — Alon Friedman will speak; he is the founder and CEO of Emagix, a biomedical company.

We’ve hit the first of the summer news doldrums. The Examiner crew is working on a few projects, and we’ll get them published soon, one possibly as soon as tomorrow. Otherwise, I’m mostly taking a mental health day today, so won’t be much around.