You are here: Home / Featured / The strange history of Halifax’s streetlight selection and the apparent demise of LED Roadway Lighting

“I could say I told them so — and I did, way back when ‘them’ was still Rodney Macdonald and his Tories, and from then on forward through Darrell Dexter and Stephen McNeil to whatever same-old-same-old will come next — but I’d have to stand in a too-long line behind all the other told-them-so nattering nabobs of negativism,” writes Stephen Kimber:

The fact the Yarmouth-Portland ferry is a bottomless subsidy suck that only seems to get deeper and suckier with each passing government has been a reality of political and economic life in Nova Scotia for more than a decade.

2. Allowed to be human 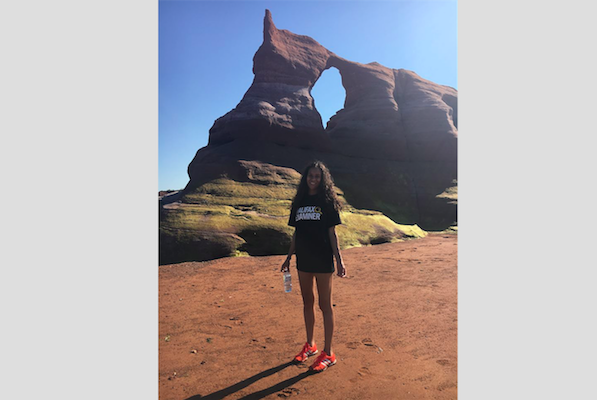 El Jones is a strong and brave woman. It takes a lot to put herself out there on political and social issues, and often it is returned in hate, and then it takes still more to talk about her personal experiences receiving that hate, but that she does, with a personal essay she wrote this weekend:

So naturally I don’t like it when people react by saying “ugh, here we go again. Another story about prison.” Or, even more commonly, “another story about race.” There she is, banging on about racism again. It’s not the criticism that gets me — you don’t go through graduate school in English without learning to take magnitudes more criticism than that — it’s the sense that what people are responding to is a particular image they have of the “angry Black woman.” That they truly believe that I write about prison or racism or injustice out of some perverse desire to be annoying, or to be an “SJW” or to “pull the race card” or “wallow in victimhood” or whatever narrative it is people are working from that allows you to make sense to them. And those are the mild criticisms, not the ones telling you to suck their dick and shut the fuck up you fucking cunt or calling you nigger or wishing lynching would come back.

El deals with this as well as anyone can, I think, and she explores her thought processes at length. It’s worth a read; click here for “I don’t want to be a role model, I just want to be allowed to be human.”

Even that heartfelt essay was met with hatred. After I published the piece, people wrote to me: “she’s a racist,” said several. “I had it worse,” said one. Another said (I’m paraphrasing) that El taking piano lessons as a child demonstrates that she didn’t have it all that bad, and after all, she has a white father (which she has written about in the past).

From a press release:

CUPE 4764 members, caseworkers employed by the Community Justice Society (CJS), are set to begin job action on July 30, after sending 48-hour strike notice to the Nova Scotia Minister of Labour and Advanced Education this morning. The strike will leave restorative justice clients and communities without options, and interrupt court dates.

A picket line will begin at 8 a.m. Monday at 1256 Barrington Street, Halifax.

CUPE 4764 has been in negotiations with the employer since December 2017. The union applied for conciliation in June 2018. However, conciliation efforts have failed and on July 26 the membership voted unanimously to reject the employer’s final proposal.

CUPE 4764 President Denise Russell points out that “probation officers are overwhelmingly male while restorative justice caseworkers are predominantly female. This is an old story and it’s time that government rewrote it.”

Workers say since then they have seen a large increase to their work loads, without an updated contract or increase in pay.

“In 2016 we saw 248 files; in 2017 we had 617 files, so it was a very significant increase, 149%,” says restorative justice caseworker Shila LeBlanc. “Really the workload itself has become a bit more complicated in terms of the situations we’re seeing, but it’s also so much more work for the exact same number of staff, with no additional funding whatsoever.”

The city this morning issued a Request for Proposals (RFP) for planning and designing the Spring Garden Road streetscape makeover. The successful company will produce several design alternatives that will be tested with the public, resulting in a final design that, if timelines are met, will be adopted next June.

The “core study area” of the design is the entirety of Spring Garden Road, from Barrington Street to Robie Street, but the streetscaping itself will be from Queen Street (at the library) to Cathedral Lane (at Victoria Park).

The design must include:

The RFP makes no mention of a requirement for public washrooms or water fountains. There are washrooms at the canteen in the Public Gardens, but that is closed in the winter and may be perceived as a private space not open to the non-purchasing public. There are also washrooms in the Central Library. But so far as I can recall, there are no water fountains anywhere on Spring Garden Road, in Victoria Park, or in the Public Gardens. 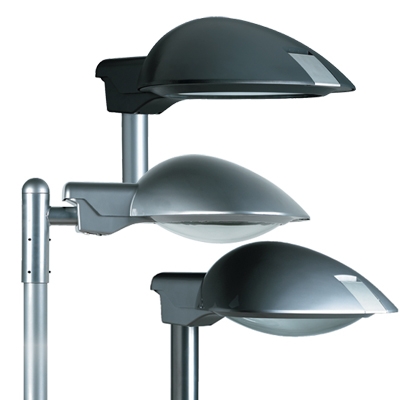 The requirement for “Holophane Petchina” (sic) and “Holophane Washington” streetlights in the Spring Garden Road streetscaping RFP reflects an apparent city-wide standard. Holophane is a UK- and US-based company; in the RFP, “Petchina” is a misspelling of Holophane’s product line Pechina. The lights are shown in the graphic above.

There’s some interesting history to this.

In 2015, G.J. Cahill and Company was awarded a city contract to begin replacing all street lights with LED bulbs. In March 2017, an unbylined article in the Chronicle Herald (this was during the Herald strike) explained:

When the Cahill group was awarded the contract in 2015 the city allowed them [sic] to choose from four pre-approved suppliers. Of those four, LED Roadway originally was selected. Recently, however, Cahill decided to end that arrangement.

The suppliers in question are American companies Holophane, Phillips, and Cree, as well as Halifax’s LED Roadway. City documents show that this list was chosen from 11 competing suppliers. The selection was based on, among other things, the lifecycle of their products, prior experience and performance.

According to [then-city spokesperson Tiffany] Chase, the city could not comment on the decision to move fixture procurement outside the province, but the change was within guidelines.

LED Roadway Lighting’s headquarters are in the Bayers Lake Industrial Park in Halifax, but its manufacturing plant is in Amherst.

Two months later, in May 2017, the city issued a tender offer for five street lights around the Mary Ann building then under construction across from the library; the bulbs on the lights could be “‘Petchina’ [sic] Head Large or approved alternate,” which would presumably allow for the contractor to supply LED Roadway lights. But a month later, on June 5 2017, the city amended the tender offer:

There is no substitute for the Holophane products. The approved alternate option is retracted. All references to “Petchina” should read “Pechina”.

No explanation was provided for the change. 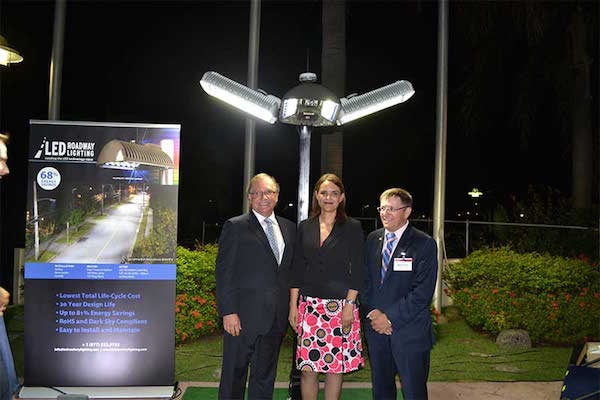 A week later, on June 13, 2017, LED Roadway Lighting laid off 45 workers at its Amherst plant, and the company has been in free-fall ever since. At the time of the layoffs, reported Jennifer Henderson for the Halifax Examiner:

… the provincial government’s stake in LED Roadway has grown to $22 million: $11 million in equity (converted to common shares in 2014 so LED could borrow money from banks more easily) as well as a $10 million loan guarantee, and a $1 million loan.

Was the loss of the ability to sell LED lamps to the HRM the cause of the dramatic decline of LED Roadway Lighting? I don’t know. The HRM contract could have provided as much as $37.5 million in business to LED Roadway Lighting, but I can’t assess how much of the company’s operations that represents.

As represented in tender documents, the city has all along had a preference for Holophane products, but it allowed for “approved alternatives,” which in the streetlighting switch-out project included products produced by two other firms (Phillips and Cree) in addition to LED Roadway Lighting’s fixtures.

So far as I can tell, the “Redbook” for municipal design standards, which was adopted in 2013, is still the city’s defining design manual, and still sets the design standard for streetlights as follows:

However, the entire design manual is being revisited in order to focus on the Spring Garden Road project.

Incidentally, earlier this month, LED Roadway Lighting filed a $1.38 million lawsuit against Alltrade Industrial Contractors, an Ontario firm. LED Roadway alleges that Alltrade failed to pay for streetlighting bulbs and fixtures it had supplied to Alltrade as part of a streetlighting project in Sault Ste. Marie. Alltrade is the contractor for the project, which is overseen by the Public Utility Commission of Sault Ste. Marie.

Chuck Cartmill, the founder of LED Roadway Lighting, is from Sault Ste. Marie.

I often feel like there’s a bunch of stuff going on in the background of these public contracting issues that we never hear about. 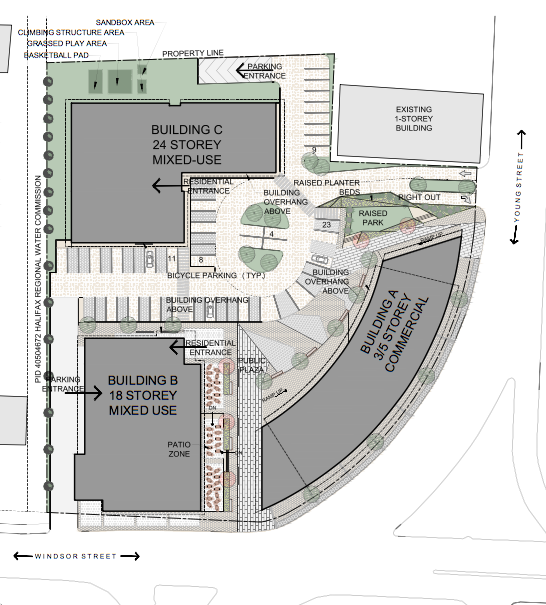 Halifax and West Community Council (Monday, 6pm, City Hall) — the council is being asked to approve a gigantic development proposal for the corner of Windsor and Young Streets from WM Fares. It includes two towers, of 24 and 18 storeys, and a three- to five-story commercial building. I don’t think anyone much objects to all the tall towers going up along the Young corridor, but what I see so far is uninspired, with parking lots fronting the street and no allowance (that I’m aware of) for any area parks or greenspaces that aren’t essentially privatized (as in rooftop gardens). We’re in danger of the entire northern chunk of the peninsula becoming a traffic and aesthetic mess (not that it’s great the way it is), but I’m sure the Centre Plan will solve everything, right?

City Council (Tuesday, 10am, City Hall) — it looks like it’s going to be a long and boring meeting; I’ll dive more into it tomorrow.