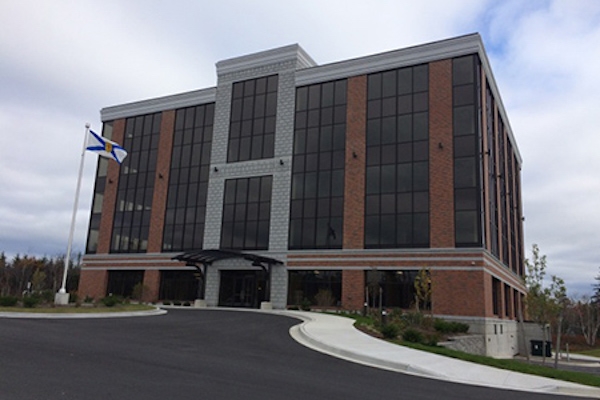 The new offices in Bayers Lake for execs with the Nova Scotia Health Authority cost $500,000 to furnish. Photo: Pace Group

Henderson quotes Jessica Dauphinee, a nurse at Northwood Manor, who says that residents are regularly fed with Kool-Aid, hot dogs and Cheesies. “Food budgets should never be allowed to be cut to this level,” she said.

And then there’s the new offices for the Health Authority:

Burrill went on to say that while McNeil told seniors and nursing home operators the province didn’t have any more money, the government approved nearly $500,000 to finish and furnish new offices for top executives with the Nova Scotia Health Authority. That information was reportedly accessed through a Freedom of Information request filed by the Nova Scotia Government Employees Union. The offices rented by the Health Authority were carved out of 6,600 square feet of space at 90 Lovett Lake Court in the Bayers Lake Business Park. The building is also home to 89.9 The Wave owned by the Pace Group.

Stephen McNeil was campaigning in Cape Breton on Wednesday, where an increasingly elderly (and vocal) population is concerned there are too few doctors. The Halifax Examiner emailed the premier asking for a response to Gary Burrill’s critique of spending health care money on office space while funding for seniors was being cut.

“I don’t know the size of the renovation,” replied the Liberal leader via email, “but I can tell you when it comes to the cost of the furniture, that absolutely makes no sense to me. We’re trying to provide care to our citizens and spending that kind of money on office furniture in my view is excessive and inappropriate. ”

This article is behind the Examiner’s paywall and so only available to paid subscribers. Click here to purchase a subscription.

2. No straight dope on legal dope 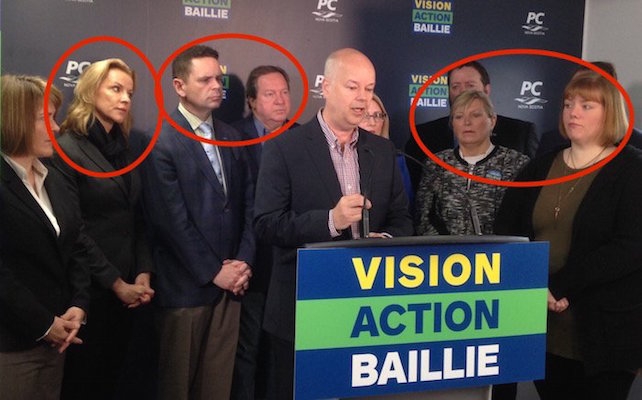 None of these people are stoned. Photo: Jennifer Henderson

Legal, recreational toking is a little more than a year away,” reports Jennifer Henderson, “but all three party leaders say it’s ‘too early’ to offer a glimpse (let alone a ‘vision’) of where cannabis might be sold in Nova Scotia, who will sell it (public, private, or both kinds of vendors), how much it might cost (taxes included), or how new rules will be enforced to keep it out of the hands of under-aged users (and we don’t even know the legal provincial age yet).”

Click here to read “The missing election issue: What are we going to do about legal weed?”

This article is behind the Examiner’s paywall and so only available to paid subscribers. Click here to purchase a subscription.

Brendan Maguire took to Facebook Live last night to say that “The provincial government has commited to working with the city to clean up the RDM site in Harrietsfield,” and that a press release to that effect was sent to the media.

The Halifax Examiner didn’t get any such press release, so I can’t give you any details, if they exist at all. But “working with the city” doesn’t sound very specific.

Once again the city is contracting out services at the Sackville Sports Stadium in order to get around paying workers a decent wage.

You’ll recall that in 2014, city council approved a cleaning contract for the facility. As I noted at the time, the winning bidder pays its workers minimum wage with no benefits, where a city worker doing the same job at a city-operated rec facility is paid $20/hour plus benefits.

And today, the city has issued a tender for landscaping services at the Sackville Sports Stadium. As I wrote in December:

I don’t have any problem with managers and others getting paid over $100,000 for their work. But to then turn around and pay the people cleaning the toilets and locker rooms 12 bucks an hour is just unconscionable. It’s obscene, really.

Someone making $12 an hour is someone with two or three jobs. It’s someone who lives hand-to-mouth, who has no financial security, is a pay cheque away from disaster. It’s someone whose life collapses if they have to take off work to tend to a sick kid.

Working with the United Way, the Canadian Centre for Policy Alternatives has pegged a living wage in Halifax at $20.10/hour, and that still doesn’t allow for any savings. Most, but not all, people who work directly for the city get somewhere in that ballpark. But because there is no living wage ordinance, council can contract out work and avoid paying people working at city-owned facilities or on city-directed projects a decent wage. And that’s exactly what’s happening with the rec centres.

It’s true that in February council voted to direct staff to prepare a report on including living wage conditions in tender offers:

THAT Halifax Regional Council direct staff to return with a report that addresses options for scoring of local preference, social economic benefit, employee compensation/living wage, and environmental impact when evaluating proposals, and recommend any supporting amendments to the procurement policy as a result.

Not present: Councillors Streatch and Whitman

That was, however, in February, over three months ago, and still no staff report. It appears staff is trying to sneak in more contracting out of services before the report is returned to council.

Council should reject all contracting out of services that can be done in house until a living wage ordinance is adopted. 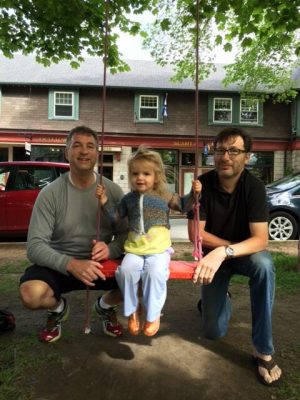 In the Halifax Examiner’s very first Morning File, on June 23, 2014, I mentioned the “red swing (non)controversy”:

Hoping to encourage people to get out and enjoy public spaces, in early June, the 20-something networking group Fusion hung a dozen red swings around the city. People seemed to enjoy the swings, which garnered no controversy until a CBC story Friday  revealed that unnamed “[l]awyers with the municipality” were “worried someone will get hurt and sue the city; crews have been told to take the swings down if they spot them on city land.”

But Sunday, Halifax’s chief bureaucrat Richard Butts and city lawyer John Traves went to the Hydrostone Park and plopped some random girl from the neighbourhood (Ashley Morton’s daughter Gwen) on a red swing, tweeting a picture [above] of the event approvingly. Saturday, CBC followed up on its Friday article, updating readers that the supposed swing-hating city lawyers had been overruled by saner superiors.

Commenting on a Facebook discussion about the swings, councillor Waye Mason said the entire controversy was manufactured by CBC. “I suspect this was just an in passing remark turned into a story,” wrote Mason, “and it was ‘too fun’ to run with it and ruin it by emailing Waye or Jennifer and having us say ‘no one has actually decided anything, no one has asked they stay either.’”

Well, not to be a killjoy, but I wouldn’t dare place Gwen on the swing today. Here’s the photo I took yesterday: 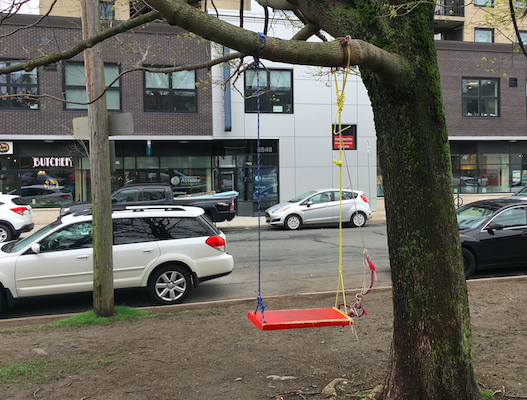 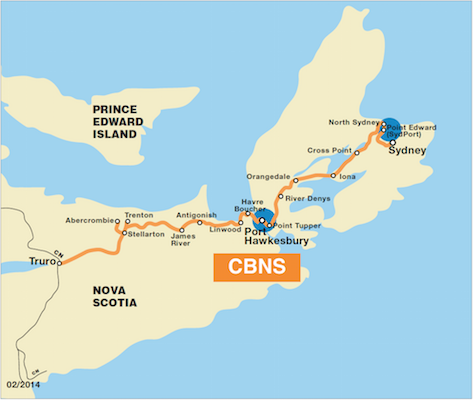 “The Sydney Subdivision of the Cape Breton and Central Nova Scotia Railway (CBNS) must be the most studied stretch of unused track in the country,” writes Mary Campbell for the Cape Breton Spectator:

The Subdivision was the subject of three different reports (with a total price tag of $152,600) in 2015. It’s to be the subject of a $460,000 study for which the Port of Sydney Development Corporation is now seeking funding (although admittedly, that study will include an active portion of track, from Truro to Port Hawkesbury).

And the St. Peters Junction-Sydney line is also being studied, even as we speak, by the provincial government.

The Department of Transportation and Infrastructure Renewal (TIR) has engaged consultant Neil MacNeil … to look into the situation of landowners along that stretch of the track.

As with the Examiner, the Spectator places its articles behind a paywall. You can subscribe here.

“Lawns in north-end Dartmouth are under attack by crows ripping up the grass to get at an infestation of beetle larvae, also known as grubs,” reports Pam Berman for the CBC.

The crows do seem even more animated than usual this year. They’re obviously very intelligent animals, and it’s weird that there’s an entire crow society with complex languages and customs, even art, grafted on to our own society, and the two rarely interact. Well, except in Jim Dewolfe’s yard on Moira Street:

He has a bucket handy with pebbles that he throws at the crows to try to keep them at bay.

6am: Octavia, container ship, arrives at Pier 42 from New York

7am: Veendam, cruise ship, arrives at Pier 22 from Sydney with up to 1,350 passengers. The Veendam is a regular visitor to Halifax; I’ve been following its travails:

In 2011, a 61-year-old woman passenger on the ship died, as 86 other passengers were suffering from a gastroenteritis illness on the ship. The cruise line claimed that the woman died from other causes, but a Brazillian newspaper said that she died from “suspected food poisoning.”

In 2012, the Veendam flunked a US Centres for Disease Control inspection, although it has passed more recent inspections.

That fall, 70-year-old Sarah Tessier Powell went missing from the ship, somewhere in Canada, maybe in Quebec, or Charlottetown, or Sydney, or Halifax. “Police said they do not suspect foul play in Powell’s disappearance and think she may have walked off the ship without being checked by security,” reported the CBC. “How on earth is that possible? ” asks lawyer Jim Walker. “Passenger gangways are supposed to be heavily monitored by security with each passenger’s sea pass card scanned and the gangways always covered by closed circuit television cameras.”

In February 2014, the Veendam was struck with norovirus, affecting 114 of 1,273 passengers, about nine per cent of those on board.

In October 2014, the ship’s propeller failed, causing the cancellation of three cruises that would have included stops in Halifax.

In December 2015, the Veendam was again struck with gastrointestinal illness, this time affecting 73 of 1,429 passengers, more than five per cent of those on board.

Other than that, the ship seems like a great time.