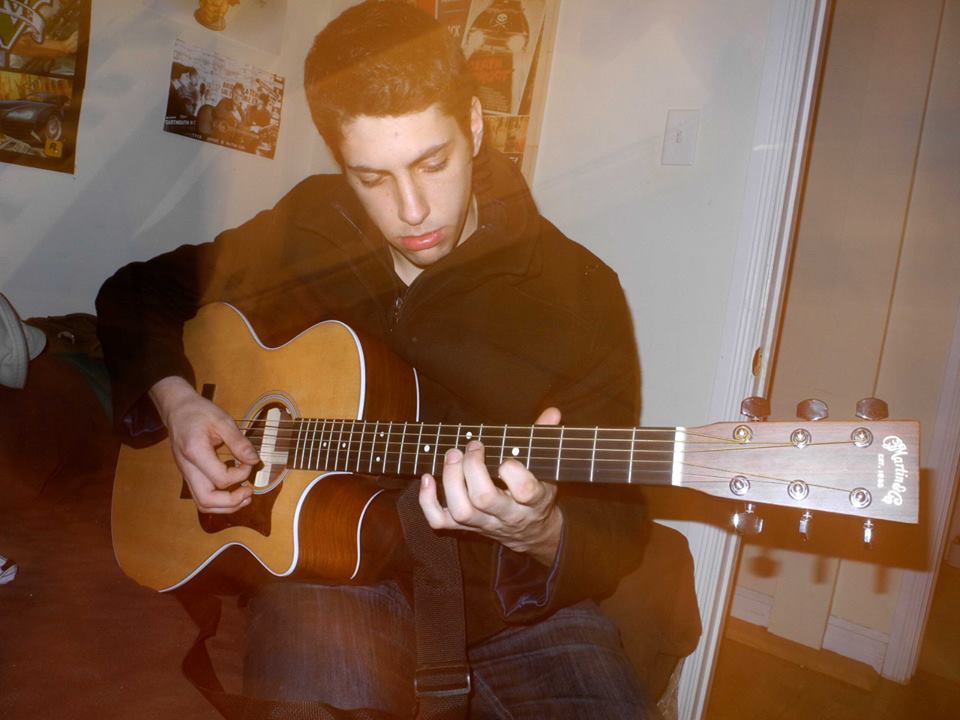 As the investigation progressed, investigators arrested Sandeson outside an address on Leaman Drive in Dartmouth on Tuesday, August 18 at approximately 8:30 p.m. and conducted a search of an address in the 1200 block of Henry Street throughout the day on Wednesday, August 19. At this time, investigators believe that Taylor Samson was murdered at the Henry Street address. The remains of Taylor Samson have yet to be recovered and the investigation is on-going.

Sandeson is scheduled to appear in Halifax Provincial Court today charged with first degree murder. This was not a random act as Taylor Samson and William Sandeson knew one another.

Samson lived at the Sigma Chi fraternity house on South Street, and the Henry Street address is three buildings east, an apartment above Don88, an Asian grocery store at the corner of Henry and South Streets, reports the Chronicle Herald.

Citing court documents related to a search warrant that police served at the fraternity, Global News reports that the murder involved a drug deal:

The documents state police said they had reasonable grounds to believe that there was marijuana in the fraternity house and they believed it was related to the missing persons case of Samson.

It shows police believe friends were aware Samson sold marijuana for extra cash while in school and that on Saturday night, Samson left with a black duffle bag believed to be carrying marijuana. He only took his cell phone and left behind his wallet and car.

The documents show police indicate a friend believed Samson was uneasy about the deal he was going to make Saturday night.

“Samson seemed nervous about it since it was 4 pounds, a larger amount of marijuana than usual,” the document reads.

“Samson did not know this new “client” as he was introduced through a regular “client of Samson’s…making him very nervous.”

Samson described himself as an “entrepreneur” on his Facebook page. He was a physics student, and “was a pitcher for the Tri-County Rangers baseball team out of Waverley,” reports the Chronicle Herald

“Sandeson had just been accepted into Dalhousie University’s faculty of medicine and was set to start as a first-year med school student on Monday,” reports the CBC:

According to Sandeson’s LinkedIn profile, he worked as a patient attendant at the Queen Elizabeth II Health Science Centre in Halifax. The Truro native was also a runner who represented Nova Scotia at the 2013 Canada Games in Sherbrooke, Que.

The Chronicle Herald adds that Sandeson “was part of Nova Scotia’s bronze medal 4×400 relay running team at the 2013 Canada Games in Sherbrooke, Que.”

Geoff MacLellan, the Minister of Transportation and Infrastructure Renewal, announced yesterday that he was delaying a decision on who would operate the Yarmouth ferry next year. He had originally planned to make that announcement this week, but now says the issue needs more study.

Nova Star Cruises, which currently operates the ferry, has so far this year collected $8.1 million of the $13 million the government has committed to the ferry. This year’s season ends October 14.

I try to check the government tender offers each morning, but I somehow missed one last week. Thanks to reader Nicholas Steeves for the heads up on the police department’s tender for six mass casualty medical supply packs.

Crouch and Snell were business partners at a company called MediaBadger.

The partnership soured and Crouch resigned from the company in early 2014.

Crouch is now vice-president of digital practice at Corporate Research Associates. [He has left CRA since this article was published.]

Crouch alleges Snell “has become fixated on me” and sought to break a mutual non-disparagement agreement.

Snell never referred to Crouch by name, but Crouch alleges he was being referenced in tweets and blog posts written by Snell about “a problem individual,” “the village idiot” and other terms.

Justice Glen MacDougall will first rule on whether Crouch’s statements amount to cyberbullying, and then will say if he will hear a Charter challenge to the law, reports the CBC.

Weirdly, Robert Snell has blocked me on Twitter. I don’t think I’ve ever interacted with him, and if I have, I’m sure I behaved myself. Hey Robert, I’m on your side on this! And you’re missing all the grammar jokes! But if you’re going to block me, you may as well block my @hfxExaminer account, too.

Giles Crouch, the alleged village idiot, has not blocked me. I’m trying not to read too much into this.

“The Dawgfather PhD, the popular Dalhousie University campus hotdog vendor, has filed an injunction against the municipality regarding the [University Avenue bike lane],” reports the Chronicle Herald.

I don’t know how popular the Dawgfather is. I think a few years ago he had a valid, or at least arguable, point when he said the city was trying to unfairly strip his long-time vending spot in front of the Dalhousie Student Union away from him. But he seems to think that the spot comes with a privileged parking spot — in a no parking zone. In order to supply his hot dog stand, he parks his van in the no parking zone,  and has collected tens of thousands dollars worth of parking tickets. Now, he says the bike lane will unfairly take that spot away from him.

This is ridiculous. The Dawgfather can go hunt for a legal parking spot like everyone else.

But he’s managed to, er, derail (?) the bike lane for this year.

Lezlie Lowe’s mother died this summer, and Lezlie is left pondering the meaning of her possessions.

I often note that there are seldom any fish in streams anywhere near what we call civilization anymore — that is, at least, the ones that have not dried up.

Often, there is an oily film on any standing water. I note that most homes in our neighbourhood, and most others, have paved driveways that seem to require “sealing” at least every few years. Does anyone else wonder where all the sealing material that was put on the last time went? Down the street, down the ditches and into the nearest stream, in most cases.

We fight against all manner of pollution, power plants, pulp mills — almost any sort of industry — and yet how many of these protesters have these paved driveways? How many of them drive their pollution-producing vehicle to wherever the protest is taking place? Most of them, I’d guess, especially if they live in almost any subdivision you want to mention. 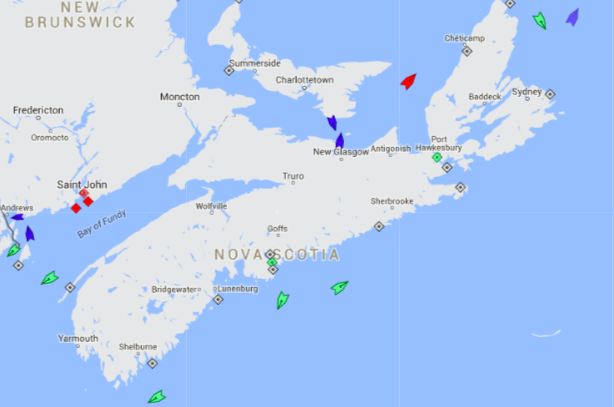 The seas around Nova Scotia, 8:15am Friday. Map: marinetraffic.com

The Maria S. Merian, a German research vessel that explores the Arctic, arrived at Pier 24 from Nuuk, Greenland this morning.

There are some rumors on the Internet that Aurora is owned by Computer Associates founder Charles Wang. However this seems not correct as SuperYachtFan received a message that Aurora is actually owned by a (former?) Russian Governor of the St. Petersburg Region. This make sense as St. Petersburg hosts the former Russian Navy cruiser Aurora. The cruiser Aurora had an important role in Russia’s 1917 October Revolution, as a blank shot from her forecastle gun signaled the start of the assault on the Winter Palace. Aurora is now a navy museum based in St. Petersburg. This could explain the yacht’s name Aurora. Also, during one of SuperYachtFan’s visits to Antibes, we spotted a Russian plated Bentley near the yacht Aurora. The Bentley had some special plates with registration B-888-BB-88. Still we are not sure who the actual owner is, it could be Valentina Matviyenko, the highest-ranking female politician in Russia and Governor from 2003 until 2011. (Aurora was purchased in 2010 from Jan Kulczyk). Or Georgy Sergeyevich Poltavchenko, the current Governor of St. Petersburg.