You are here: Home / Featured / The push for entrepreneurship is destroying the world: Morning File, Friday, April 28, 2017

1. Are we doing right by international students? 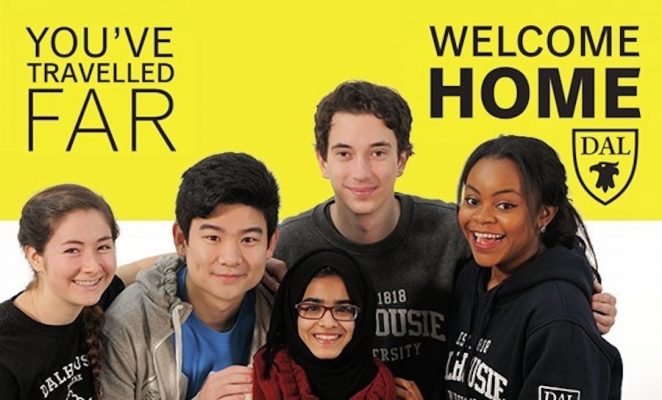 Lambie came back with a sprawling 6,000-word article that touches on all these issues.

Click here to read “Are we doing right by international students?”

Whatever it is, it isn’t serious. It’s an election budget. No matter what happens — whether the Liberals win a majority government, or win a minority government, or lose all together — the actual budget that gets implemented won’t look anything like that thing everyone’s been writing about since yesterday.

“There’s a shift going on in Canada business, and it’s a shift towards the good, according to a group of Halifax documentarians embarking on a nationwide adventure to show you how,” reports Zane Woodford for Metro:

Three-fourths of the crew behind The Social Shift documentary — video producing twins Meaghan and Marie Wright and social activist Joseph Huyer — leave in just over a week to fly to the west coast, and meet up with Kevin Courtney, a Toronto videographer.

When they get there, they’re going to buy a camper van and hit the road, stopping in Vancouver, Calgary, Saskatoon, Regina, Winnipeg, Toronto, Ottawa, Montreal, New Brunswick and Nova Scotia. They hope to interview a few people at every stop, including social entrepreneurs, cultural promoters, professors, students, and even Prime Minister Justin Trudeau.

And what is “social enterprise”?:

The twins said they were blown away by the realization that business doesn’t have to be, as Meaghan put it, “cut throat, make money, scale up, exit strategies and all that stuff.”

Why hasn’t anyone ever thought of that before? Thank the good lord that we three 20-something business school grads to lead us out of the woods!

Oh wait. A couple of hundred years ago there was a certain spectre haunting Europe, and then there was a labour movement, and then the Socialist and Social Democratic political parties that aimed to, ya know, place environmental, social, and cultural values above the desires of cut-throat, make-money capitalists.

It’s sad that these young people appear to have no knowledge of labour history, or of the fight against capitalism. And that’s what we’re talking about here. Let’s say it out loud: capitalism.

Look, I know a lot of people who consider themselves “social entrepreneurs.” Some of them are my friends. They’re basically good people, trying to live ethical lives, trying not to be assholes, trying to do something worthwhile in the world.

But without the historic, social, political, and economic context, without acknowledging that the last two centuries have been about the supremacy of capitalism, we’re left with this feel-good nonsense about “social enterprise” that will inevitably be a sort of velvet glove capitalism. This isn’t the fault of the basically good people trying to do something worthwhile with their lives. It’s a systematic problem, reflecting an economic order that reduces everything — not just goods and services, but also the environment, culture, social relations, and political systems — to a commodity, and so therefore to a monetary transaction.

This is why it disturbs me so much when non-profits chase supposed “charity money” put forward by insurance companies, or when governments sell naming rights to publicly owned facilities, or when the fucking phone company claims to own mental illness awareness. No matter how worthy or sensical these instances appear at the moment, they don’t  fundamentally challenge the underlying system of exploitation. In fact, they advance it.

And sure, we all live in the world we’ve been handed. I too think of myself as a basically good person trying to do something worthwhile in the world. And I’m a business person. But I guess I’m too old to be a hipster millennial social entrepreneur and the Halifax Examiner can’t be considered a social enterprise. I’m just some old fart trying to live as best I can in the world, like the thousands of years of old fart business owners before me who also thought of themselves as basically good people trying to do something worthwhile.

My real worry here is that the phrase “social enterprise” is the softer, feel-good end of the push for increased entrepreneurship, which is always promoted as good thing, no downside whatsoever. But there are lots of downsides. One is the risk: most new businesses fail, and very often their failure results in tremendous hardship for the owner. The bigger issue, though, is that entrepreneurship is being sold as the solution to declining living standards — don’t worry about there not being a job for you at graduation, or that if you do find a job it will be temporary contract labour at shit pay, you can start a business!

The push for increased entrepreneurship and in particular the aiming of that message at young people is specifically intended to derail the labour movement. It’s no accident that the union-busting McNeil government is also heavily promoting entrepreneurship. (See also, union-busting Chronicle Herald prez Mark Lever’s celebratory promotion of the Ivany report.) And there’s a direct line from the privatization of services and the P3s to the policies of austerity designed to take money out of the pockets of working people and to give it to plutocrats.

The goal here is to privatize expectations. In a socially just world, we would have collective responsibility for, well, everyone. We would collectively — through properly funded post-secondary education, labour regulation, government social programs, and redistributive tax policies — help young people succeed in life, help them become contributing citizens with worthwhile lives.

But the push for entrepreneurship upends this: it’s all on you, kid. You want a university education? Pay for it your own damn self. You want to promote good values and have a decent standard of living as well? Then start your own business and good luck, sucker. Whatever you want, don’t be expecting anything from the rest of us.

Yvonne LeBlanc-Smith, reporting for the CBC, explains how the 10-centimetre diameter, 170-kilometre long electric cable will be laid across the Cabot Strait:

The first end of the cable to be laid was threaded through a one-kilometre borehole, pulled through some casing and onto the Newfoundland shore. The second cable, which will be laid separately, is still in transit and is expected to arrive in Atlantic Canada from Japan, where it was manufactured, in mid-May.

Within about two weeks, the cable is expected to be pulled ashore at the Point Aconi site north of the power plant.

The cable is being lowered by the cable layer Nexans Skagerrak, which is in place off Port Aux Basques: 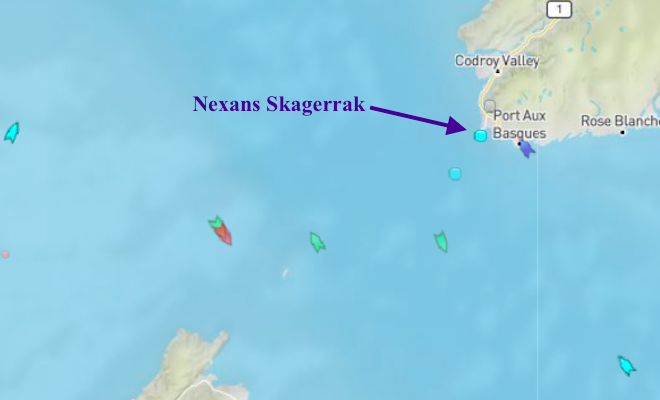 The cable layer Nexans Skagerrak (light blue dot) is stationed off Port Aux Basques, Newfoundland, starting to lay the Maritime Link. The dark blue ship icon is the passenger ferry; various container ships and an oil tanker are in transit farther out in the Cabot Strait. Map: marinetraffic.com 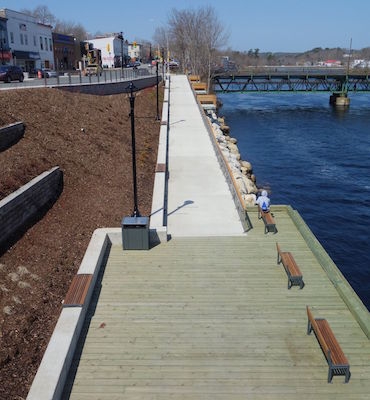 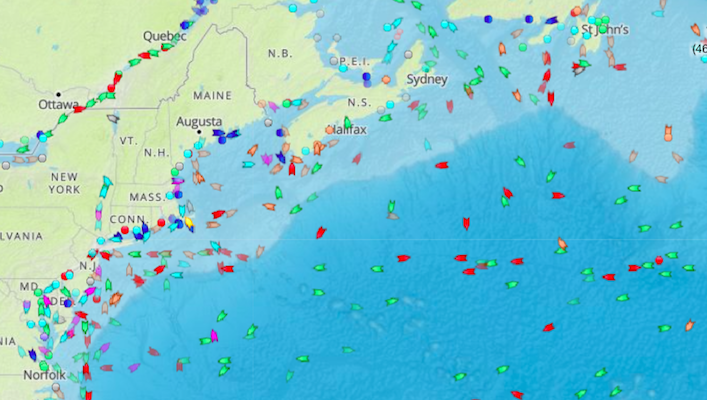