You are here: Home / Featured / The patronage appointment of Laurie Graham shows that Stephen McNeil and Ray Ivany have utter contempt for the working people of Nova Scotia: Morning File, Friday, March 18, 2016 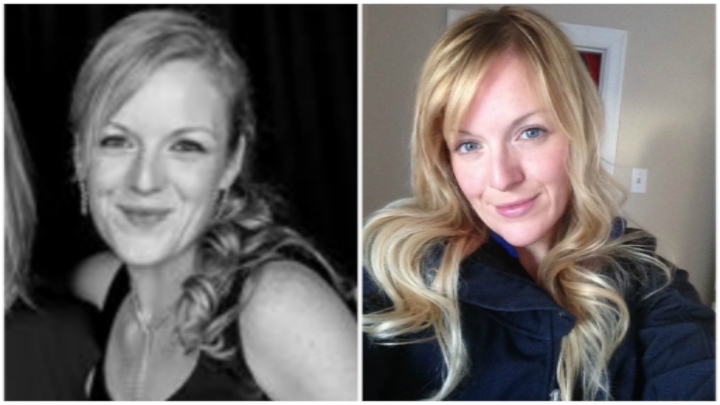 CBC reporter Rachel Ward obtained the search warrant documents related to the arrest of Chris Garnier for the murder of Truro police officer Catherine Campbell. Those documents included a sworn affidavit by RCMP Constable John Berger, who alleges that Garnier confessed to the crime:

“He admitted to punching Ms. Campbell several times in the face and to strangling her with her hands,” Berger swears in the documents. “He said he could hear her last gasp.”

Police learned that Campbell left her apartment around 1 a.m. on Sept. 11 in a taxi to go to the Alehouse in downtown Halifax after a stressful week, documents say.

She met Garnier at the bar where they kissed and talked, documents say. Police do not say if they found a prior connection between the two or if they believe they met for the first time at the bar. Garnier was there with a friend, who ended up in the drunk tank, the documents say.

Video surveillance from the bar shows what police believe to be the pair leaving around 3:40 a.m. They arrived at Garnier’s friend’s house on McCully Street in Halifax around 3:45 a.m., the documents allege.

About 45 minutes later, police say a man was caught on video surveillance rolling a green bin down Agricola Street and then North Street in his bare feet.

Campbell’s body was found in the woods under the Macdonald Bridge. Allegedly, the next day Garnier was preparing to return to the scene to remove the body.

I asked Examiner transportation columnist Erica Butler to have a look at it. She’ll have a full report on Monday, but here are her initial thoughts:

One notable improvement right off the top: This latest draft of the plan includes much stronger language around Transit Priority Measures (TPMs), and even points to two problem corridors, Gottingen Street and Bayer’s Road, as areas that need intervention if transit is to function properly on those routes at all. The plan also includes a long-awaited list of 11 short term TPM opportunities, including a transit only toll lane on the MacDonald Bridge.

One worrisome thing to note:  The implementation for the plan is recommended to stretch into 2021, due to the complexity of the endeavour and the limited staff resources at Halifax Transit. 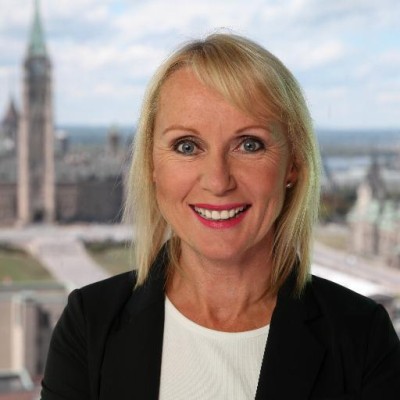 “Premier Stephen McNeil’s hires highlight relationship between press and politics,” reads the headline on Graham Steele’s latest column for the CBC, in which Steele discusses former journalists getting hired by the public sector. But the real point of the column is buried way down:

There’s one more issue — and we need to say it out loud: money.

Government jobs pay better, and are more secure, than most reporting jobs.

When the offer of well-paid, secure employment comes up, it must be very tempting.

Even so, hiring Laurie Graham as the premier’s principal secretary at an annual salary of $160,000 was eyebrow-raising.

That’s a higher salary than the premier’s chief of staff, who is ostensibly her boss — and more than any cabinet minister.

And who is Laurie Graham? Before she was hired as a parliamentary reporter for CTV, she worked at CBC, which provided her bio to J-Source:

Graham joined the public broadcaster in 1989 as a radio reporter in Sydney, N.S. In 1993, she joined 1st Edition, the provincial news broadcast as its Cape Breton reporter and then moved in 1998 to Halifax to join The National as its Maritime reporter. Since 2005, she has been a national reporter for CBC based in Toronto and has covered international stories from Israel, Afghanistan and Haiti.

Frankly, I never heard of her before this week. But here’s the detail Steele left out: Laurie Graham is Ray Ivany’s wife. 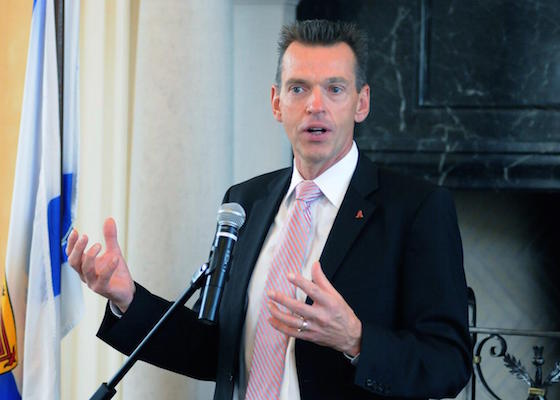 That’s right: the premier created a bullshit position with a bullshit job title — principal secretary, really? Like she’s going to be filing letters and working the switchboard? — and created a lavish salary for the spouse of a connected friend of the premier.

This is patronage, pure and simple. No one at all can defend this with any integrity. There is no defence. It’s straight-up ripping off the taxpayer for a political favourite.

Even worse, the political favourite is Ray Ivany, whose name adorns the Ivany Report, the saintly figure who deigned to tell us peons that if only we would change our bad attitudes this province would get itself together economically.

Ivany also sits on various other boards and commissions. He is a Governor at Rothesay Netherwood School, a private institution. Ivany is also a director at Nova Scotia Business Inc. And, of course, he was the lead commissioner on the the Nova Scotia Commission on Building Our New Economy, i.e, the Ivany Report. (Apparently, no one has bothered to ask what Ivany was paid for his role in the Ivany report.) There are probably others. And most of the public appointments will include per diem, meals and travel expenses covered by the taxpayer.

Ivany sure knows how to work the public service angle for the big bucks.

Ivany had a heart attack last year, and while he is said to have fully recovered, he is retiring from Acadia effective in June 2017. Acadia hasn’t announced Ivany’s retirement pay, but if it’s anything like former Dalhousie University president Tom Traves’, Ivany will make as much as he did while he was working. And Ivany still holds the other positions.

I’m told Ivany leaned on McNeil to hire Graham, because evidently the household can’t live on $400K and change a year. McNeil obliged.

This is the same Stephen McNeil who is attacking working people at every turn. We can’t afford public sector wages, says McNeil, as he doles out $160K to his friend’s wife. Teachers are getting paid too much for educating our children, says McNeil, as he creates a bullshit job with no defined duties for Graham. Nurses are the enemy, says McNeil, but we gotta bring Laurie home so she can tend to Ray while he recovers from his heart attack.

It cannot be more clear: Stephen McNeil, Laurie Graham, and Ray Ivany have utter contempt for the people of Nova Scotia. This is all one big joke to them. As they see it, they are of one stratum of society and deserve giant salaries and comfortable lives provided by the working people who pay taxes.  And those working people are of a lower stratum, not worthy of decent paying jobs, job security, or protected pensions.

It all started with the 2011-12 harbour dredging project, which was funded by various levels of government and Nova Scotia Power Inc., which operates a coal pier in Sydney, to allow larger ships to enter the Sydney port. Ottawa provided $20 million, Nova Scotia $17.2 million, Cape Breton Regional Municipality $2 million and Nova Scotia Power $1 million.

The dredging reportedly came in under budget, so about $2.5 million was set aside in a trust fund for the port and restricted to spending on things like navigational aids, fish habitat reports and monitoring, and other port projects.

Today, that fund is reported to be down to $1.8 million, and critics of how the port development corporation has been spending the money suggest the fund should never have been used to pay for things like legal fees, marketing consultants and international travel and hospitality.

Sure, but $700,000 misspent will be peanuts compared to the tens or even hundreds of millions of dollars that will be spent should port enthusiasts get their way and a container terminal and associated rail links be built. The whole plan is nuts, and someone should step in now before real disaster happens.

I recently read where Francis Doyle and his son, Jason, were left homeless by a fire in New Waterford (‘I have nothing,’ Cape Breton Post, Feb. 19.)

They were put up in a motel for two nights then had to leave with nowhere to go. This man has a heart condition and finds it hard to walk. I can’t blame him for saying “I feel like two cents.”

Thanks to Alice Hall who took them in to stay with her so they can have an address, as Francis Doyle couldn’t receive any income assistance until he had an address.

There’s a lot of poverty in Cape Breton. We have food banks here, work is scarce, our health system could be better and places are closing.

It makes me boil and sad to think people here have to go through something like this and there’s no need of it.

I hope Mr. Doyle and his son found a place and no one else has to go through such a situation again.

The History Across the Disciplines conference is this weekend. Two notable events:

Still is the Master of Moving: Change, Authority, and History (Friday, 7pm, Room 1009, Rowe Buildin) — Steven Schwinghamer will give the keynote address.

Shipwrecks (Saturday, 6pm, Pier 21) — James Delgado will speak on “The Great Museum of the Sea”:

The oceans, lakes and rivers of the world are the greatest museum of humanity’s interaction with the sea – as well as our global expansion and a record of our interactions with each other through immigration, exploration, commerce and war. In an engaging, detailed and yet quick tour, Dr. Delgado explores some of history’s most famous and significant shipwrecks from antiquity through the modern age, with an emphasis on wrecks in and around North America – like the Civil War ironclad USS Monitor, the USS Arizona at Pearl Harbor, and RMS Titanic. 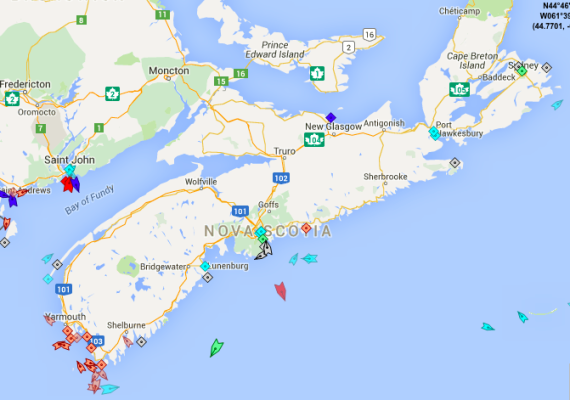 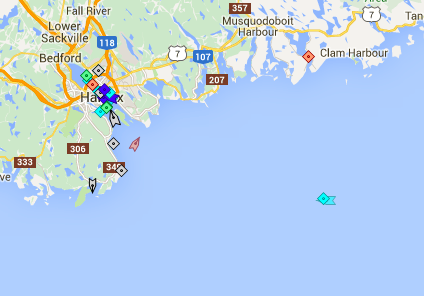 The Stena Icemax — the Shell oil rig that broke in the last storm — has been been moved to 24 nautical miles off Halifax Harbour, so it can be more easily serviced. The rig is the blue box on the map above; it is being serviced by the Breaux Tide, an offshore supply ship.