You are here: Home / Featured / “The only reason to go on living is so that I can kill”: A bone-chilling letter from a serial killer 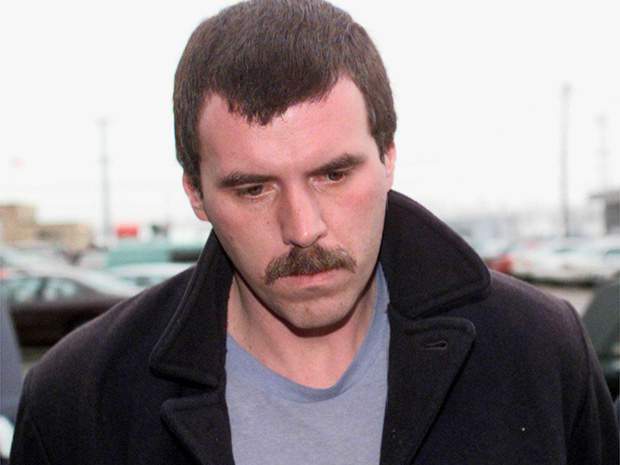 Among the court documents obtained by the Halifax Examiner in the Glen Assoun wrongful conviction case is a bone-chilling letter written by serial killer Michael McGray to a prison psychiatrist.

The letter is dated May 13, 2003. McGray was then housed at the Atlantic Institute in Renous, New Brunswick. He was arrested in 1998 for the murder of a Moncton woman named Joan Hicks, and in 2000 and 2001 he pleaded guilty to the murder of Hicks, her 11-year-old daughter Nina, and four other people.

Since 1998, McGray had been held in segregation — solitary confinement — at Renous. In 2003 prison authorities told McGray that he would soon be seeing a prison psychiatrist, and so McGray wrote the letter to the unnamed psychiatrist because, he said, he could be more forthcoming in a letter than he could be in person. 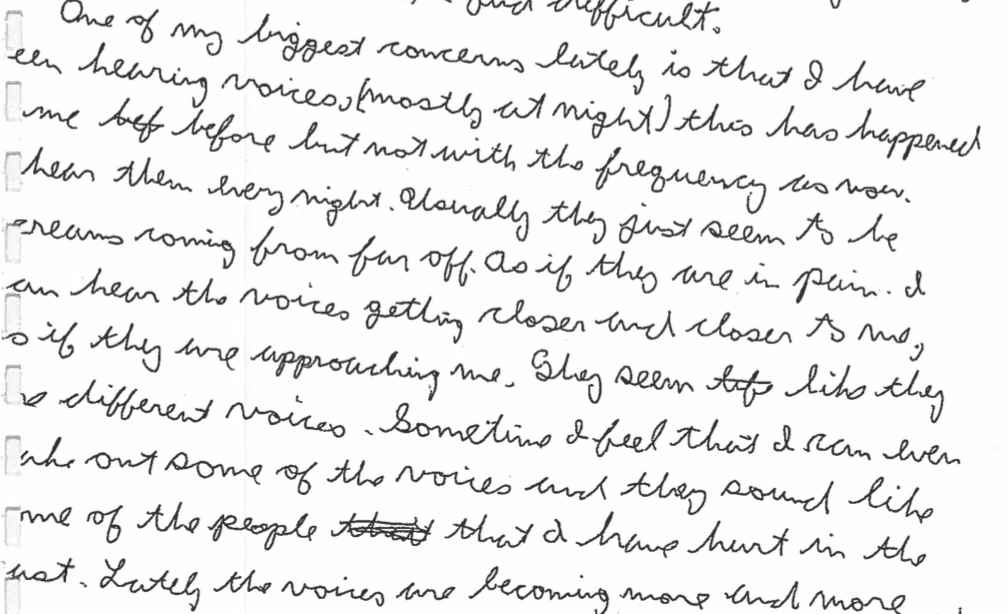 In the letter, McGray wrote of hearing voices. He said he had occasionally heard voices in the past, but now they were coming on strong, and he was hearing them nearly every day, mainly at night. “Usually they just seem to be screams coming from far away, as if they are in pain. I can hear the voices getting closer and closer to me, as if they are approaching me. They seem like they are different voices. Sometimes I feel I can even make out some of the voices and they sound like some of the people that I have hurt in the past. Lately the voices are becoming more and more frightening to me. They seem as if there [sic] screams of torture and are getting worse.”

McGray went on to say that the screams were getting closer, right outside the window of his cell, and the voices “can bore right into my head.”

“At first I used to think these voices were just a side effect for some of the things in my past, but now I’m starting to think that they might be some kind of retribution against me for all the people I’ve hurt,” he wrote.

Worse, wrote McGray, he was now, for the first time in his life, seeing phantoms, glimpses of people who he can’t quite catch in full view. And while he tried to understand what he was seeing, “I am really scared of what I am going to see … I am afraid that I am going to see something truly horrifying, and every day I feel it is coming closer to revealing itself.”

A compulsion to kill

McGray then got to the point of his letter — his desire to get out of segregation so he could live a more or less normal life in prison for the rest of his life. And to do that, McGray felt he had to explain his compulsion to kill to the psychiatrist.

“I have killed a lot of people in my life, more than I was ever convicted for, that’s for sure,” wrote McGray.

McGray wrote that he had “very little insight into why I killed. I never killed for money or sex, greed, envy, lust, none of those. As far as I can see, I struck out against humanity as a hole [sic]. All my life, I have had a deep hatred for people in general and I guess at one time I felt it was my mission to eliminate as many as I could. I sure took pleasure from it, I know that.”

“It has now been five years since my last murder,” he continued, “and that is the longest I have went without hurting someone since I was 17. I want it to end so that I can function as a normal prisoner somewhere. But I have my doubts that will ever happen.”

“Worse than anytime in my life, I am now consumed with thoughts and fantasies of hurting other inmates. My hunger and rage grows the longer I am locked up; all I can think about is how heavenly it feels to release my wrath on someone. I had these feelings all my adult life, but now I’m in a similar head space as I was back in 1991, when I was released from La Macaza [a medium security prison in Quebec; McGray was jailed on a robbery conviction] on a three day pass. I took off for 21 days. During that time I went on a rampage to release my rage that had built up [in] the previous four years of incarceration. I killed three people that time and fought with several others. Two of those murders didn’t come to be attributed to me until the year 2000.”

McGray had received the three-day pass from La Macaza for the long Easter weekend of 1991. On Saturday, March 30, McGray met 59-year-old Robert Assaly in a bar in Montreal’s gay village; the two went to Assaly’s home, where McGray killed Assaly with a knife. The very next day, Sunday, March 31, McGray met 45-year-old Gaeten Ethier, also at a bar in Montreal’s gay village; the pair went to Ethier’s home, where McGray smashed a beer bottle over Ethier’s head, then stabbed him with a knife. McGray pleaded guilty to both murders in April 2000.

But in his letter, McGray mentions three murders during his 1991 release [he did not return to prison as scheduled on Tuesday]. Dave Moore, the RCMP constable who subsequently investigated McGray, tells me that in 2003 he found another victim he thought was murdered by McGray during another prison release.

“The victimology was the same ([McGray] went to the gay district in Montreal and picked up a gay (he hates gays), then he lured him back to the gay guy’s apartment and when there, he tied him up with the bedside lamp wires and stabbed him with three different knives and left the knives in the sink,” says Moore.

Moore says he told his RCMP colleagues of his suspicions, but “the homicide unit did not believe me.” So Moore drove to La Macaza to check McGray’s prison records and discovered that McGray was on a temporary release the day of the murder.

Moore says he had a written correspondence with McGray and in that correspondence McGray had confessed to the third murder, even giving “holdback info” — details of the murder that police had collected but which were not publicly released.

Moore does not recall the name of the third murder victim, but says it was on one of his flowcharts on his office wall. The letters between Moore and McGray and the flowchart were among the evidence Moore had collected in his office; that evidence was destroyed in 2004, when Moore was on vacation.

In McGray’s 2003 letter to the prison psychiatrist, McGray says he targeted “suitable victims,” seeming to suggest that he killed marginalized people because the wider world didn’t care much for victims who were sex workers, gay men, or prisoners.

“I had so much rage built back then, [in 1991]” he wrote. “But I was never an impulsive killer. I could always control it until I got a victim in a safe space where I could carry out the murder. I’ll never forget those 21 days on the run because I remember [while in prison] I could not satisfy my hunger (for that is what it feels like, a hunger) for fear if I was around inmates I would have nothing to stop me from feeding that hunger again.”

A 2003 letter from Michael McGray to his psychiatrist, in which McGray admits to committing “many murders” between 1992 and 1998. Brenda Way was murdered in 1995.

“The reason I mentioned those murders in 91 was because that’s how I feel again today,” McGray continued. “I feel that I have so much inside me that needs to be released. I committed many murders from 93 to 98 after I was released again but I never had as intense urge like I did in 91 or today because then I was able to satisfy my urges every few months.”

Brenda Way mas murdered on November 12, 1995, during the period in which McGray said he had “committed many murders.” Way was murdered behind an apartment building in a dark parking lot surrounded by trees, which might fit McGray’s definition of a “safe space.”

In the letter, McGray continued: “Doctor, it’s not just that I have an anger problem, I’m sure I do but I feel I have to hurt people to survive. It’s like food or air, I need it so badly. Sometimes I feel the only reason to go on living is so that I can kill an inmate someday and have that release again.”

McGray told the psychiatrist that he had been put in segregation in the Secure Housing Unit at Renous because he had threatened to kill a guard. “Now this is VERY VERY important,” wrote McGray, “This will never happen! I am not stupid! I know what my life would look like here if I attacked a guard, and I will never let that happen. I do have this hunger and urges but I have always been able to control them until I found a suitable victim. A inmate may be a suitable victim but a guard is definitely NOT!”

McGray said he made sure to treat the guards with respect, and it bothered him that the guards had a “paranoia” about him. “I am not a danger to them,” he insisted.

He ended the letter saying he looked forward to talking in person with the psychiatrist. “It is my hope that we can work together,” he wrote.

McGray wrote these words in 2003, and prison authorities were certainly aware of them. But for some unfathomable reason, in 2010 McGray was transferred to the Mountain Institution, a medium-security prison in British Columbia. There, McGray shared a cell with a 33-year-old man named Jeremy Phillips; Philips was near the end of a six-year, nine-month sentence for aggravated assault.

On November 21, 2010, McGray murdered Phillips, first beating him in the face and then strangling him with a torn up bed sheet. McGray pleaded guilty to murdering Phillips in 2011.

Since 2012, McGray has been housed at the Ste-Anne-des-Plaines Institution in Quebec, the highest security prison in Canada.