You are here: Home / Featured / The obsolete local newspaper: Morning File, Wednesday, May 10, 2017 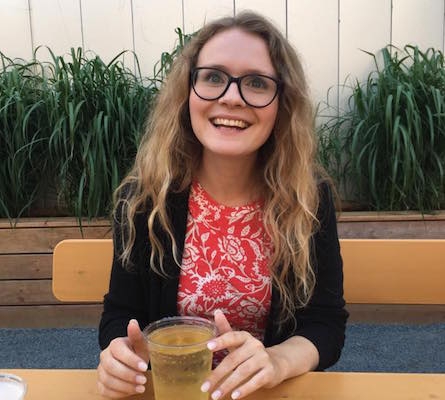 When we first discussed the possibility that she’d do some work for the Examiner, I was anticipating that Macdonald would produce a bunch of notes and documents, and I’d somehow have to piece them together to make articles out of them. Instead, she came back with Court Watch — wonderfully written complete pieces, with a distinct almost playful voice. I couldn’t have asked for more. Frankly, I’ve been completely gobsmacked by the columns.

So I’m happy to report that Macdonald is moving forward with her career, having found an articling position with a law firm in Wolfville. I’m excited for her and know she’ll succeed fantastically. It’s been a true pleasure working with her, and getting to know her.

That means, however, that this week’s Court Watch column is her last. I’ll put the column on hiatus until university classes start in the fall, and perhaps then I can find another law student wanting to revive it.

2. The battle over on-street parking on Almon Street 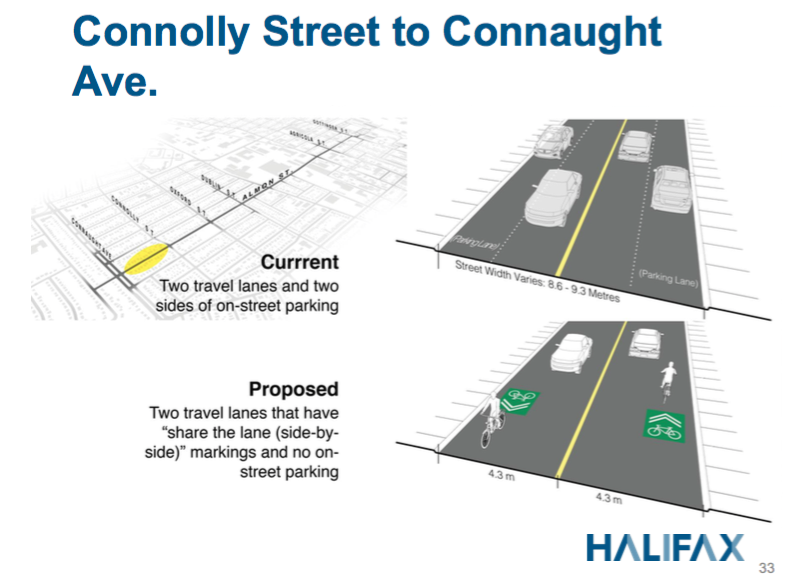 Proposed redesign of Almon Street from Connolly to Connaught Streets… all loss and no gain?

“The city is considering adding bike lanes and sharrows along Almon Street in hopes of creating an east-west safe corridor across the peninsula for active transportation,” reports Examiner transportation columnist Erica Butler:

The proposal would see painted bike lanes along both sides of Almon between Agricola and Connolly Streets (about 1.2km) and painted sharrows for sections at either end of the corridor, at Gottingen and Connaught Streets.

The surprisingly well-attended public meeting on the redesign proposal last week made one thing clear: On-street parking (and the potential loss of it) will be a contentious issue as HRM turns the corner in transportation planning towards an all-modes approach.

Click here to read “The battle over on-street parking on Almon Street.” 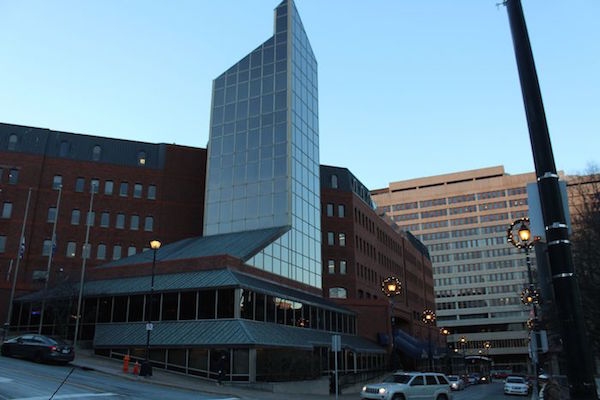 The city has issued a Request for Proposals (RFP) for a company to develop a “shared services agreement” between the city and George Armoyan, who will buy the World Trade and Convention Centre building on Argyle Street.

The agreement between the city and the province for the new convention centre included provisions for how to deal with the old WTCC, which is owned by the province and houses the existing convention centre and office tower above it. That agreement called for putting the building up for sale, and if no one bought it, the city would have to buy it at book value. To my great surprise, Armoyan stepped in and and agreed to purchase the WTCC for $13.5 million. The sale will be finalized when (supposedly in January) the new convention centre opens in the Nova Centre a block down the street.

The problem is that the WTCC was built as part of a complex with the adjacent Metro Centre arena. As Internal Service Minister Labi Kousoulis explained to the CBC last August:

“Unfortunately, that process was put together in a very haphazard way,” Kousoulis said by phone from his Halifax constituency office.

The building is connected to the publicly owned sports facility, [Metro] Centre, and actually contains the centre’s lobby, box office, Sports Hall of Fame and fire exits, he said.

“In my eyes, the city was giving up control of the Metro Centre,” Kousoulis said.

The city has recently sold naming rights to the arena to a bank, and the bank logo has been splashed all over the building. For some reason I can’t understand, other media and much of the public seem to have no problem giving the bank free advertising, but I’m under no obligation to do so. Instead, I now call the arena the “$48 NSF Fee Centre,” which is just one of the bank’s outrageous and usurious fees. (Should the bank want me to call the arena by the name of the bank, their representatives are free to contact me to negotiate a deal — my price is $200 per utterance for advertising.)

The RFP shows just how complex the situation is:

The WTCC (1800 Argyle Street, Halifax, NS) is a provincially owned facility with a pending purchase and sale agreement. The facility is integrated with the municipally owned [$48 NSF Fee Centre]. The WTCC and [$48 NSF Fee Centre] share a number of spaces and components. Various pieces of equipment, facility infrastructure and other building systems/components used in the operation of the WTCC are located in the [$48 NSF Fee Centre]. This includes the chiller plant, heating plant, electrical service, water service, freight elevator, loading dock and meeting spaces. Conversely, certain equipment, facility infrastructure and building systems/components used in the operation of the [$48 NSF Fee Centre] are located in part or in whole in the WTCC, including parts of the cooling system, the ticket/box office, [Crappy Beer] King Club and access to the Downtown Link.

Yesterday, Halifax council spent about two hours debating crosswalk flags. This was actually a fruitful and interesting discussion, and it was good to see councillors give deep and thoughtful consideration to pedestrian safety.

In the end, council decided on a middling path for the flags: existing flags would remain where they are, for the time being. But people can no longer put up wildcat flags — instead, staff will review each newly proposed location, and new flags will not be allowed at intersections that are signalled. Over the coming months, staff will give more study to both the flagged crosswalks and how other jurisdictions deal with crosswalk safety, and use what they learn to bring back a recommendation to council in December.

“The 2016 Liberal budget was quite a different beast from the 2017 budget on which the Liberals are running for re-election,” writes Richard Starr:

Sure, it shared with the current version the obsession with achieving balance at the expense of public sector wages. But aside from that, it was leftish, featuring new spending on income assistance, childcare and disability supports.

The Liberals seemed proud of those initiatives, too. Childcare was such a big deal the Premier announced it at the Liberal annual general meeting. In 2016 the increase in assistance rates was declared “historic,” and the modest increase in spending on disability supports rated several mentions in the budget. At the time, I wrote a piece… posing the question: “Token Gesture or Welcome First Steps.” Sadly, based on the 2017 budget, the answer has to be “Token Gesture.”

Starr details the differences between the two budgets here.

It’s hardly controversial to note that the traditional business model for most publishers, particularly newspapers, is obsolete.

What most … fail to understand about newspapers is that it is not simply the business model that is obsolete: rather, everything is obsolete. Most local newspapers are simply not worth saving, not because local news isn’t valuable, but rather because everything else in your typical local newspaper is worthless (from a business perspective). That is why I was careful in my wording: subscriptions will not save newspapers, but they just might save local news, and the sooner that distinction is made the better.

Thompson goes into a lot of detail about just how obsolete the dead tree newspaper is:

This is the biggest blindspot for those lamenting the travails of local newspapers: it may be obvious that printing presses don’t make much sense with the Internet, and most websites have moved to ad networks for the obvious reasons; in fact, though, nearly all of the content in most newspapers is not just unnecessary but in fact actively harmful to building a sustainable future for local news.

Start with the front page (of a physical newspaper, natch): most newspapers have given up on having international, national, or even regional reporters, instead relying on wire services. Even that, though, is a waste: those wire services have their own websites, and international publications are only a click away. Maintaining the veneer of comprehensive coverage is simply clutter, and a cost to boot.

The same thing applies to the opinion section: any column or editorial that is concerned with non-local affairs is competing with the entire Internet (including social media). It’s the same thing with non-local business coverage. Moreover, the cost is more than clutter and dollars: almost by definition the content is inferior to what is available elsewhere, which reduces the willingness to pay.

It’s the same story in what were traditionally the most valuable parts of newspapers: sports and the (variously named) lifestyle sections. There are multiple national entities dedicated to covering sports all the way down to the university level, augmented by a still-thriving sports blogosphere. Granted, there may still be a market for local sports coverage, but that is a different market than local news: there is no reason it has to be bundled together.

Then Thompson says what will work instead:

A sustainable local news publication will be fundamentally different: a minimal rundown of the news of the day, with a small number of in-depth articles a week featuring real in-depth reporting, with the occasional feature or investigative report. After all, it’s not like it is hard to find content to read on the Internet: what people will pay for is quality content about things they care about (and the fact that people care about their cities will be these publications’ greatest advantage).

It’s like he had the Halifax Examiner in mind.

Still, Thompson may not comprehend just how much of an uphill battle this is. People have been trained to read news “for free” for decades. That news was never actually “free” — there are immense social and personal costs to being bombarded with advertising, and advertising skews the range of news and opinion one will receive — but there was no immediate direct financial outlay required of the reader, so it felt like it was free.

On the business side of things, my biggest challenge is breaking people of the old mental habit that news is free. As I say, it never really was free, and it certainly isn’t free now. It costs real money to produce the Halifax Examiner. I hope you value this product, and I hope you think the cost of a subscription — less than the price of a latte a week — is worth it.

Jennifer Henderson has written an election piece asking the important question: Where’s the dope? I’ll have that published this morning.