1. Dylan Corkum tells the true story of his Herald interview

To be honest, I felt a little bad yesterday when I called out Dylan Corkum for his vox pox interview with Herald writer Sara Ericsson*. I mean, Ericsson is fair game (as am I and every other reporter), but Corkum is just some guy presumably minding his own business, more or less.

I was especially gobsmacked by this guy: 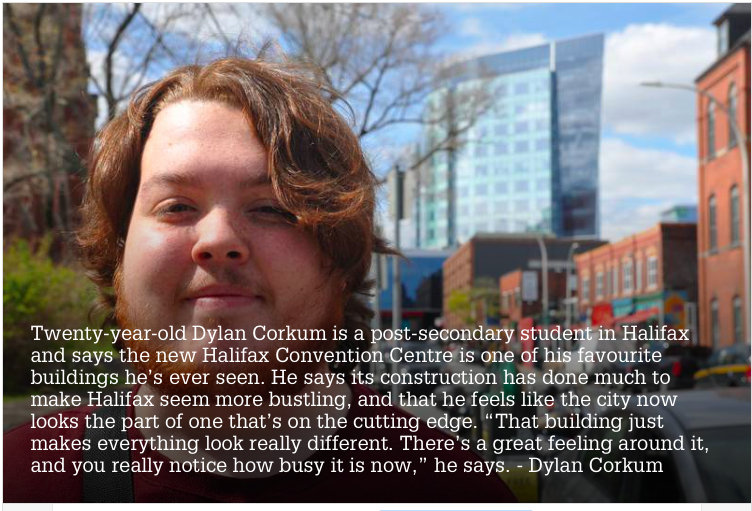 I don’t expect everyone to think that the Nova Centre is a crime against architecture — wait, I do expect that — but I guess opinions can differ. Still, “one of his favourite buildings he’s ever seen” [sic]? I mean, OK, maybe he’s never been to Paris or Venice or New York, but there’s more interesting architecture to be found in Spryfield, not to mention by simply walking around the south end.

Dylan Corkum: you gotta get out more, buddy.

Was that rude? I dunno.

But I have good news! Turns out, Corkum is a nice guy and found the whole thing funny. He DMed me on Twitter last night; I asked if our conversation could be on the record, and he agreed. Here’s what he said:

No need to be gobsmacked by me Tim — I didn’t say a single word of what they said I did lmao and i get out… enough.. 🙁

Yeah some lady stopped me and my girlfriend on the street and asked for a quick interview about business growth in Halifax or something. I don’t know anything about business so I just said I thought the opening of the new convention center would probably bring more business conventions or something to the city. She said the article would be in some business magazine, but now its in the paper and apparently I REALLY like the convention center, which is news to me! Never said anything about it making the city more busy or the city being on “the cutting edge”… and it’s certainly not my favourite building lol.

Readers can make their own observations about Ericsson‘s re-creation of that conversation, because I doubt the Herald will.

* On Thursday at 11am, I was made aware that Ericsson was the credited author, not Clarke. I don’t know if the mistake was mine or if the byline was subsequently changed.

“It took me well over the advertised 30 days and cost me $510 but last Friday I finally received the travel and expense data I had requested from the CBRM on 11 April 2019,” reports Mary Campbell in the Cape Breton Spectator:

Municipal Clerk Deborah Campbell Ryan claims it took staff 17 hours to gather the requested information, which still baffles me (as noted elsewhere, I’ve appealed the charges to the Office of the Information and Privacy Commissioner) because the information — in addition to being information any municipality that reimburses travel expenses should be able to retrieve readily — is just as vague in many aspects as the information posted by the mayor quarterly. Could some portion of that 17 hours not have been used to flesh out an entry like, “Toronto — Port Development Meetings?”

And rather than give me data I could work with, they gave me spreadsheets they’d converted to PDFs, meaning I had to convert them back myself (manually) to calculate totals. (I did try a conversion app but it messed up the columns.)

In a separate article, Campbell tells us what she learned:

In the five months after losing his bid to become leader of the provincial Progressive Conservatives — a bid that occupied him from 3 February to 27 October 2018 — CBRM Mayor Clarke ran up $17,901.01 in travel expenses.

Just over four months of travel for all three together cost the public $33,571.77.

Campbell drills down into those numbers and finds some very questionable expenses, including lots of money going into “port development”; a bizarre trip to Jacksonville, Florida; a two-day Moncton trip with a food bill for three people of $654.15; taxi expenses for a trip for which mileage was also claimed; and more.

On April 9, Energy and Mines Minister Derek Mombourquette announced that available grant money from the Nova Scotia Mineral Resources Development Fund was being more than doubled, from $700,000 annually to $1.5 million. The announcement portrayed the program with feel-good prose about young people:

Saint Mary’s University professor Jacob Hanley and PhD student Kevin Neyedley received $47,500 from the fund in 2018. They are working on research and gathering geological information about how strategic minerals formed. This will help identify where deposits may be located and then extracted with minimal environmental impact.

Young people! Who could be opposed to money for young people? 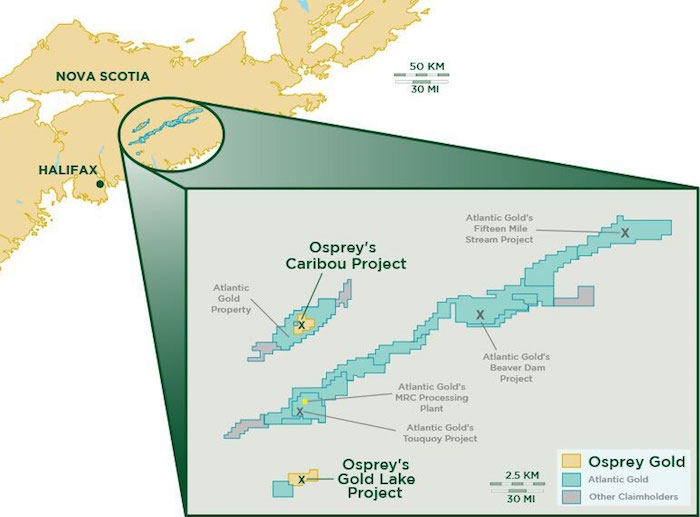 Vancouver-based Osprey Gold Ltd. is one of the many mining companies focusing on exploiting the old gold fields on Nova Scotia’s eastern shore. Osprey has two active exploratory sites — at Caribou, which is about eight kilometres north of Atlantic Gold’s Touquoy Mine and is surrounded by Atlantic Gold holdings, and at Goldenville, about three kilometres from Sherbrooke.

The provincial grants “will subsidize a high-resolution unmanned aerial vehicle (‘UAV’) magnetic geophysical survey” of the two sites, said the company in a press release:

Osprey President Cooper Quinn stated, “Receipt of the generous provincial grants to help finance these programs mitigates Osprey’s out-of-pocket expenditure during this important phase. These surveys will greatly improve upon existing coarse resolution regional surveys previously conducted in the area. Our assessment of other deposits in the region shows the importance of structure, and other geophysical signatures such as magnetic highs to be effective vectoring tools to mineralization, and that could help understand the relationship between the Goldenville and Mitchell Lake anticlines that is obscured by till. This will also aid in delineating and refining targets for our next phase of drilling at both projects.”

The detailed UAV survey will aid in the identification and delineation of additional targets for structurally controlled gold mineralization, both along strike from areas of known mineralization, and in areas that remain largely unknown, as they are obscured by glacial overburden.

Osprey Gold president Cooper Quinn is a mountain biker and advocates for reductions in fossil fuel use. His Twitter feed is full of anti-Trump and pro-bicycling and pro-pedestrian sentiment. Despite his desire to blast the hell out the eastern shore and pour mercury all over it, I guess you could call him an environmentalist.

I guess also you could call him a young person. He’s younger than me, anyway. He graduated from Simon Fraser University in 2009, so figure he’s maybe 32. He looks young: 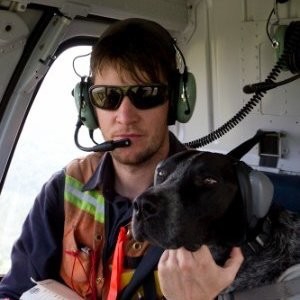 The price of gold is high, and the cost of provincial regulation is not just low but negative — the government is actually subsidizing gold operations — so it now makes economic sense for gold companies to re-prospect the old gold fields. Maybe we should have a public discussion about that?

We’ve got $1.5 million to subsidize gold companies, but we don’t have money for doctors….

“The man accused of trying to rob the Valley Credit Union branch in Canning last week walked into and out of the courtroom at Kentville provincial court Monday and Tuesday, which came as bit of a surprise to some observers at the courthouse,” reports Ian Fairclough for SaltWire:

That’s because almost two years ago, when Leif Spilchen was being sentenced for the March 30, 2016 robbery of the credit union’s Hantsport branch, he was in a wheelchair.

He said then, while representing himself, that he had been in the wheelchair for six months, and would be in it for the rest of his life. He told the judge that he was a paraplegic and that his doctor told him he had a complete spinal cord injury. He said he had only a three to five per cent chance of ever walking again “which means zero now because it has been six months and I haven’t regained any movement at all.”

That’s what the Cape Breton Regional Municipality hopes to find out for Sydney’s Centre 200.

The municipality will hire a consultant this summer to assess what the naming rights would be worth for the 5,000-seat arena, home of the Cape Breton Screaming Eagles major junior hockey team.

“Nearly six years after the horrendous oil train derailment and explosion in the Quebec town of Lac-Mégantic a group of opposition MPs have renewed calls for a public inquiry into the human and environmental disaster that left 47 dead, many more injured and destroyed the centre of that small Quebec town,” writes Richard Starr:

Monique Pauzé of the Bloc Quebecois, backed by NDP and Green members, said she was moved to call for re-opening of the case after reading investigative books by Anne-Marie St-Cernay and Bruce Campbell. Transport Minister Marc Garneau dismissed their pleas, accusing the concerned MPs of spreading conspiracy theories by suggesting the need for the probe.“ There is nothing left to discover,” Garneau told reporters last week.

Perhaps the Minister has all of the answers, but anyone who has read Campbell’s The Lac- Mégantic Rail Disaster: Public Betrayal, Justice Denied may well want to better understand how and why such a disaster was allowed to happen and what steps have been taken to ensure something like it does not happen again.

Campbell, the former executive-director of the Canadian Centre for Policy Alternatives, argues that the derailment and explosion of a 72-car runaway train loaded with volatile crude oil was a direct result of “a long pattern of loosening safety standards in the name of deregulation and cutting red tape.” He traces the trend back to the 1980s, when neoliberal ideology about “unleashing the magic of the marketplace” set in motion misguided rail transport policies — spanning the Mulroney, Chretien-Martin and Harper governments — that included elimination of cabooses and reduction of crew sizes.

Cost cutting and industry self-regulation were accompanied by privatization. In 1995 Canadian National, publicly owned for over a century, was privatized and joined Canadian Pacific in becoming an aggressive, cost-cutting continental player. Both companies put returns to shareholders ahead of serving small towns such as Lac-Mégantic.

Community Services (Thursday, 10am, One Government Place) — the committee will discuss “protection of confidential information.” Witnesses are Tracey Taweel, the deputy minister at Community Services; Vanessa Chouinard, the executive director of policy and newfangledness; and Maria Lasheras, the chief information access and privacy officer.

As of 8:30 this morning, the Alakai ferry is still in Charleston, South Carolina

I’m tied up in meetings all day; talk amongst yourselves.