You are here: Home / Commentary / “The most Trump-like thing” in Nova Scotia: how big forestry companies gutted the Biodiversity Act 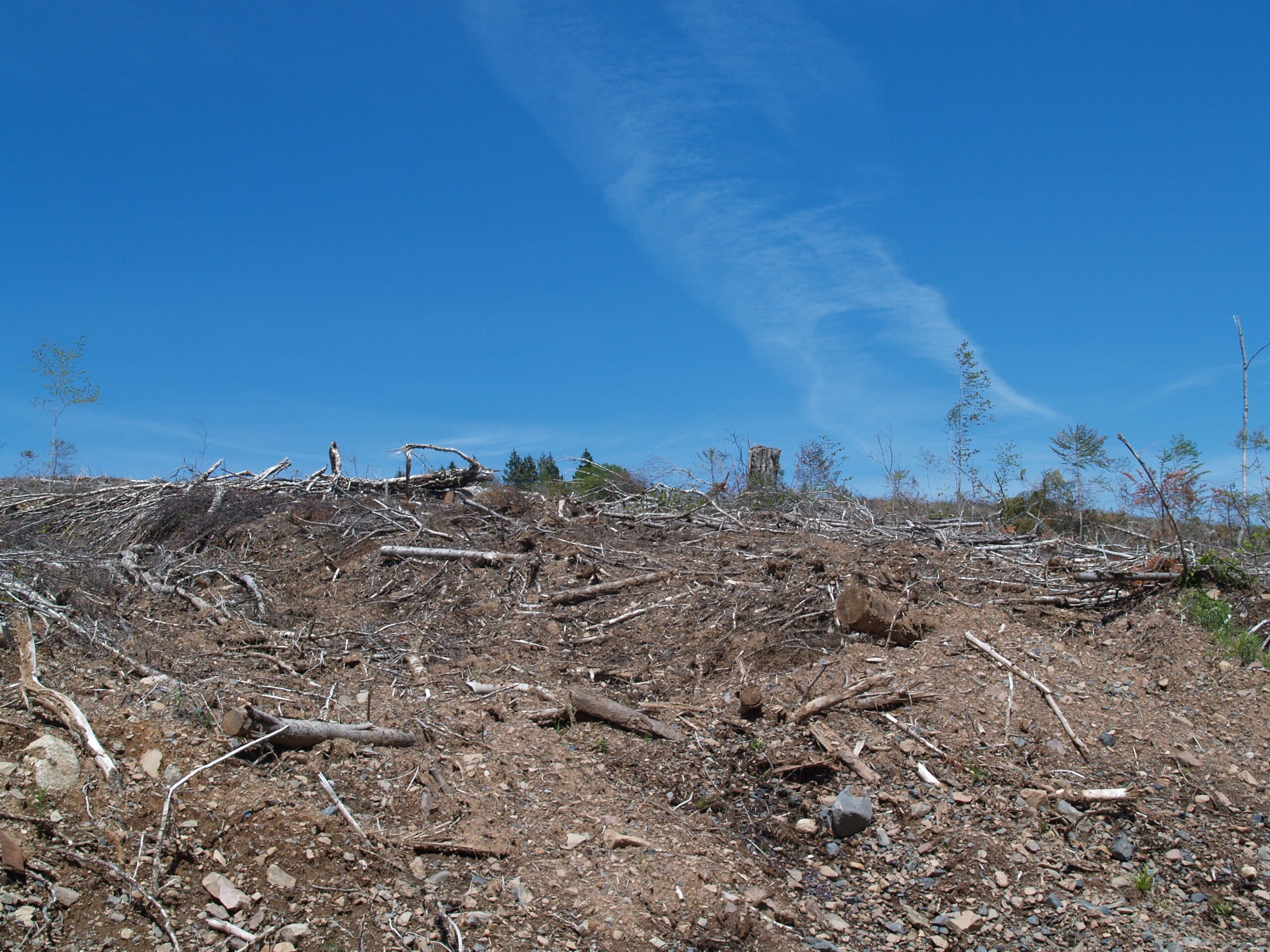 Something very serious and dangerous has been going on in Nova Scotia, and it has nothing to do with COVID.

And no, it is NOT Bill 4, the Biodiversity Act that Premier Iain Rankin’s government introduced on March 11, 2021, “to provide for the stewardship, conservation, sustainable use and governance of biodiversity in the Province, as part of an integrated framework of legislation.”

What is dangerous is the all-out, no-holds-barred, province-wide — and very expensive — propaganda war against the Biodiversity Act that has been waged by Forest Nova Scotia, the lobby group for some very large industrial forestry interests, and a so-called “coalition” of “concerned private landowners.”

Not even two weeks after the Bill was introduced, Premier Rankin’s office and the Department of Lands and Forestry caved to the pressure. Late Tuesday afternoon they announced changes to the Bill 4 that “remove biodiversity emergency orders, offences and fines from the act, and limit the scope to Crown lands unless permission is given on private lands.”

“The next step in the legislative process is law amendments, where the committee will hear further feedback from stakeholders and individuals,” said yesterday’s press release. 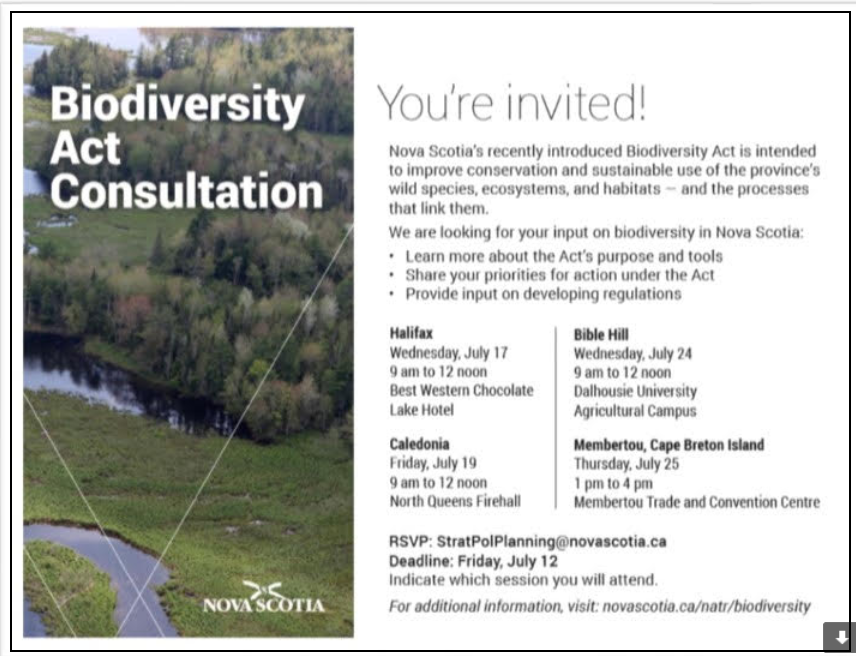 In other words, the Biodiversity Act — which was first introduced in 2019 after extensive consultation with forestry industry groups, private landowners and environmental groups, then withdrawn and revised to appease industry, then reintroduced in 2021 — didn’t even make it through the legislative process that is essential in any democracy, before a poisonous industry-led campaign to kill the Bill led to its gutting.

Not a healthy precedent.

Nor does it bode well for any other legislation that governments bring in to protect the environment or tackle climate change, if it is so easy for powerful industries to spend some money to spread misinformation and poison public opinion to get a law rewritten or withdrawn before it’s even had its day in the legislature.

Inventing a “coalition” with money and ads

The campaign against the Biodiversity Act began on Saturday, March 13, 2021, just two days after it was introduced, with a full-page ad in the Chronicle Herald from a mysterious entity calling itself the “Concerned Private Landowner Coalition.”

The ad called on “all private landowners” to “act now before it’s too late.” It spuriously claimed that “agriculture, Christmas tree growing, housing and road construction, forest management, farming livestock, and development” would all be “impacted.”

And the “Coalition” urged everyone to contact their MLA to “voice their concerns” about the new legislation.

In fact, no such coalition even existed.

In an interview with the CBC’s Preston Mulligan on NS Information Morning on March 17, Forest NS executive director Jeff Bishop admitted that the Concerned Private Landowner Coalition was “not a formal organization.”

“We didn’t feel we had to go that far,” said Bishop.

Conservationist (and also private landowner in rural Nova Scotia) Cliff Seruntine, who has been following Forest Nova Scotia’s campaign against the Biodiversity Act from the beginning, produced a video on March 20 for his YouTube channel, in which he dissected and deconstructed the arguments being made against the legislation.

In his video, Seruntine says that the purpose of the Biodiversity Act is not to take control of private land, but to help curb the widespread clearcutting for what he calls “the pulp cartel” that has decimated Nova Scotia’s Acadian forests over the past half century.

In a second video on March 22, Seruntine documented how — after Forest Nova Scotia’s Jeff Bishop confessed to CBC that there had been no coalition of concerned private landowners when an ad appeared in its name in the Herald — Forest Nova Scotia then set to work establishing a Facebook page and website for the AstroTurf “coalition” to continue and expand the propaganda campaign.

The scale and speed of the intoxication campaign has been breathtaking.

The alarmist messaging blasted out of radios, popped up on CBC articles online, leapt and metastasized all over social media.

The fear-mongering campaign even had its own “message track.”

“We need to focus our messaging on Bill 4, not on Biodiversity Act,” read the instructions from an unnamed source that appeared in an online post. “Bill 4 is a threat; it is not about Biodiversity, it is about an assault on landowners and their rights.” 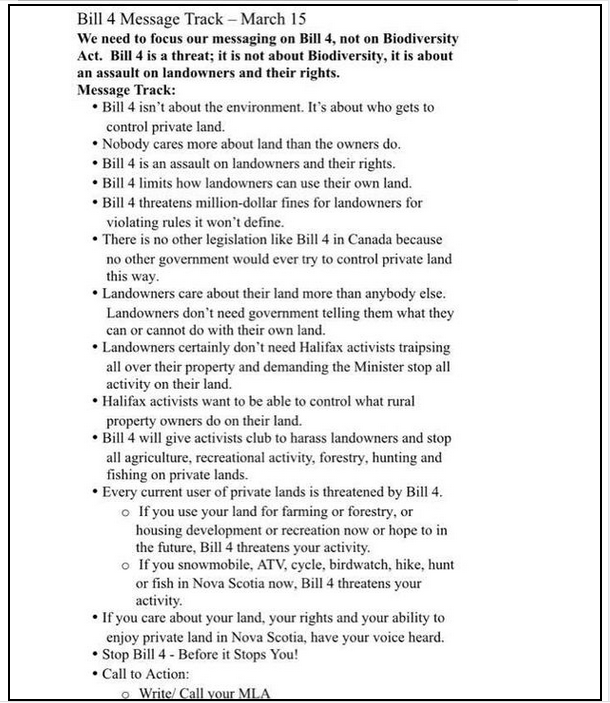 The messaging is clearly designed to seed panic and pit Nova Scotians against each other, with deliberately misleading, inflammatory and sometimes also completely false, even ludicrous claims. Among them:

Ray Plourde, senior wilderness coordinator of the Ecology Action Centre, likens the messages to “conspiracy-theory-lying,” the same level as those lies that were spread in the US that Donald Trump had really won the election, which had been “stolen.”

Just like QAnon conspiracy theories that have spread like wind-fanned wildfires on the internet, and consumed the minds people from Tatamagouche to Tokyo, the misinformation from the so-called “Concerned Private Landowner Coalition” has been effective, sowing discord and outrage online.

The campaign disparages anyone who cares about the health of forests and biodiversity in the province as urban “activists” — although all those who have contacted me to complain about the campaign and to express their support for Bill 4 are rural landowners involved in forestry or agriculture.

One forestry insider, deeply frustrated and concerned about what he calls the campaign by “vested interests” to kill the Bill, described what has been happening as “the most Trump-like thing” he has seen in Nova Scotia.

Just as Trump incited hatred of the “elites” (as if he were not one of the most privileged people in the US), the campaign against the Biodiversity Act incites hatred of “activists” and paranoia about the government, the people we elect to represent our interests and the public good. The Biodiversity Act is intended to do exactly that.

And no surprise, given that an industry group spearheaded it, the campaign against the Act distracts the public from the corporate and industrial interests that are the real threats to the climate, the environment, the forests, the biodiversity and ecosystems we need to live in this province.

Trying in vain to fight fiction with facts

The voices of people trying to refute the misinformation has been largely drowned out by the volume of the rhetoric, fuelled by fear and panic, that the campaign spawned.

Nevertheless many of those people tried to be heard.

Writing in the Chronicle Herald, executive director of East Coast Environmental Law Lisa Mitchell methodically explained exactly what Bill 4 would and would not mean, effectively countering all of the alarmist messages coming from Forest NS and its allies. She pointed out that the fines proposed are nothing new:

The proposed Biodiversity Act sets out maximum fines. Any actual fine would be determined by a judge, based on a number of factors and following a conviction. A judge could not set a fine higher than what the statute allows, but would have full discretion to set a lower fine. In fact, the act does not set a minimum fine. Historically, the fines set by Nova Scotian courts for comparable offences have been very low.

The proposed Biodiversity Act provides opportunities to enhance education, collaboration and tools that could facilitate biodiversity conservation in Nova Scotia. In light of the staggering trend of global biodiversity loss, we need this law in Nova Scotia to address the crisis effectively.

Passing Bill 4 will not cause the overnight creation of BMZs [Biodiversity Management Zones] across the Nova Scotian landscape, nor will it allow the government to unilaterally restrict the activities of private property owners anywhere in the province. If passed, the proposed Biodiversity Act will give the government tools it needs to begin conversations and actions that are desperately needed to conserve biodiversity in Nova Scotia.

But long before the Bill had a chance to be passed, the campaign led by Forest Nova Scotia succeeded in convincing the government to back down and weaken the proposed Act.

Who is Forest NS, anyway?

“Forest Nova Scotia started the campaign, they paid for it, and they approved every single word that went out on radio, online and in newspapers,” says Ray Plourde of the Ecology Action Centre.

This is certainly not the first propaganda campaign that Forest Nova Scotia has waged in recent years. 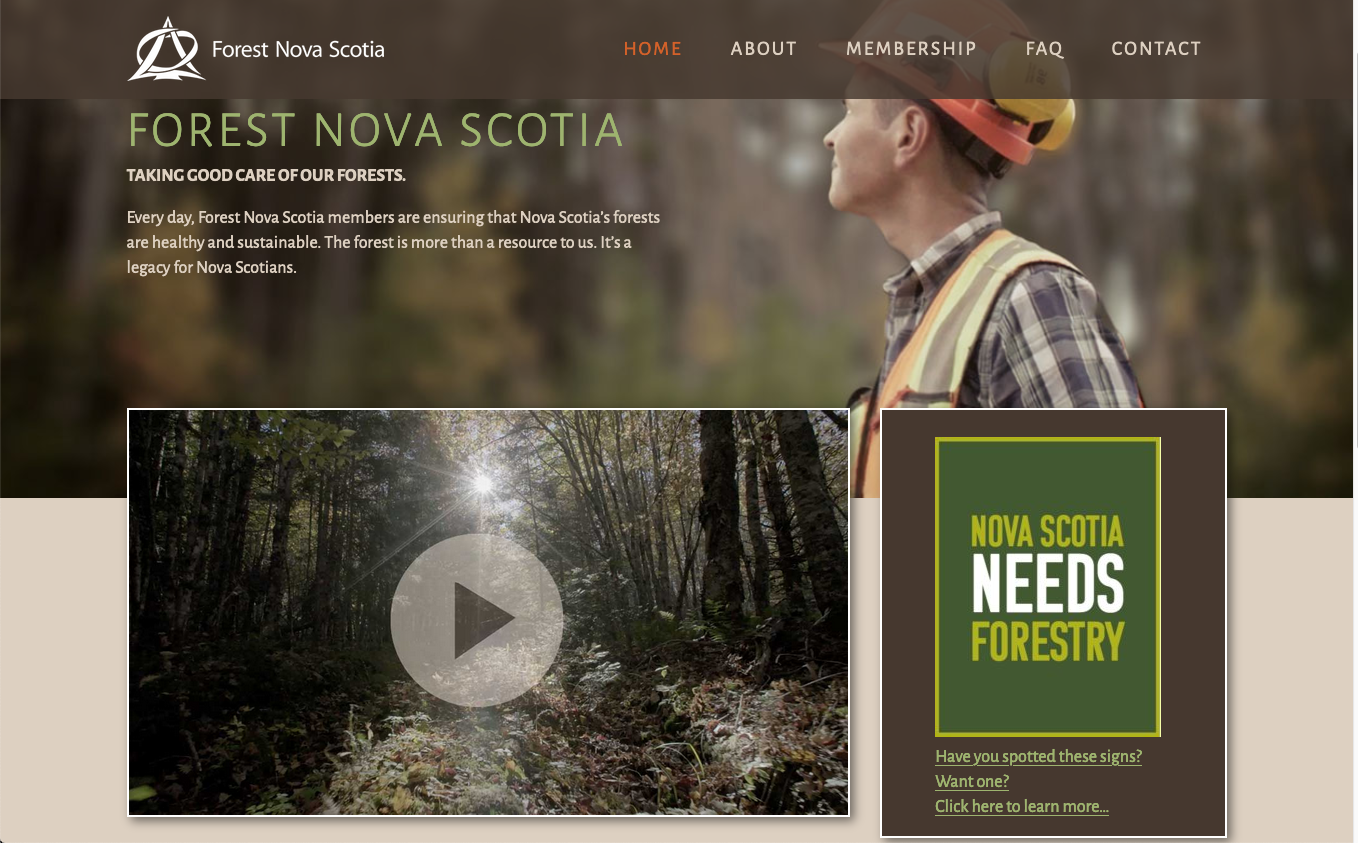 Some may recall the proliferation of signs peppering the roadsides in rural Nova Scotia in 2019, declaring that “Nova Scotia Needs Forestry.”

The signs appeared when Forest NS was spear-heading efforts to pressure the government of former Premier Stephen McNeil to allow Paper Excellence / Northern Pulp to continue to dump its effluent into Boat Harbour past the legislated closing date of January 2020, and to approve Northern Pulp’s widely-denounced proposal for a new effluent treatment facility, which would have dumped up to 83 million litres of pulp effluent directly into the rich fishing grounds of the Northumberland Strait.

Whoever bankrolled Forest Nova Scotia’s expensive campaign against the Biodiversity Act may feel satisfaction that they got their money’s worth, now that the provincial government has caved, and taken all the teeth of the Bill.

In an interview with the Examiner, Plourde said:

For the past two decades, I had a grudging respect for Forest Nova Scotia, previously Forest Products Association of Nova Scotia. We could have different opinions over facts in reasonable and rational discussions.

The Forest NS campaign against the Biodiversity Act, Plourde says, put an end to any respect he had for the organization:

This was a colossal deep dive into the gutter with clearly demonstrable falsehoods. I’ve never seen such a thing before, never seen Forest NS stoop so low. They won by lying and inciting fear. It only cost them upwards of tens of thousands of dollars, and their integrity, which is now forfeit by their lies.

And then, he says:

I can only hope this is not the beginning of a slide into post-truth craziness in Nova Scotia as we saw under the Trump administration south of the border.