Yesterday I discussed the strange case of Glen Assoun, whose conviction for the murder of Brenda Way is subject of a judicial review. Today Way’s cousin Karen Way tells the CBC that two weeks after the murder, she overheard two men in a bar discussing it. “You should have seen the look on her face when I slit her effing throat,” one man said to the other, according to Way. Way says she told police of the conversation but they were uninterested. 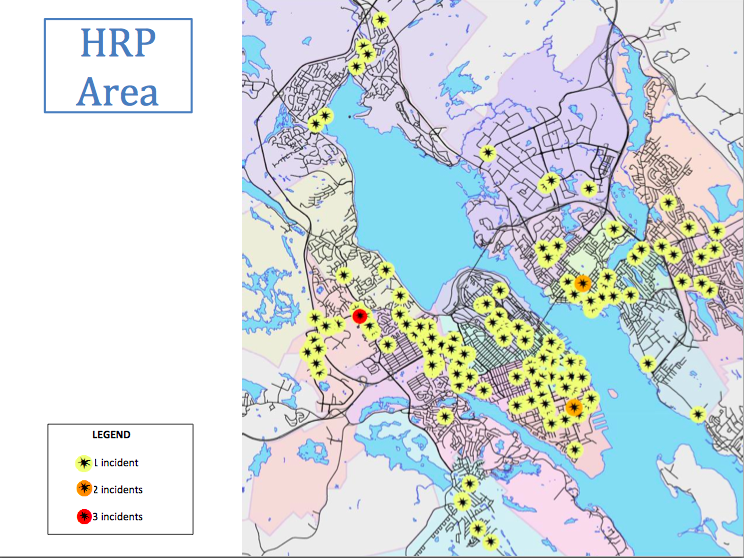 The police have released their monthly report on pedestrian/vehicle incidents. It shows a worrying increase in the number of such incidents—70 percent more this year compared to the same period last year—although it’s possible that simply more people are reporting them. “In both 2013 and 2014, the majority of vehicle/pedestrian collisions reported from January to September occurred in crosswalks (60% and 64%, respectively),” reads the release. “Of the 167 pedestrians involved, 52 reported no injury, 88 experienced minor injuries, 18 experienced moderate injuries, six had serious injuries and there were three fatalities.”

Police just started tracking the incidents last year, so it’s too early to make broad conclusions, but if last year’s stats are any indication, a bunch more pedestrians will get hit in the coming months: 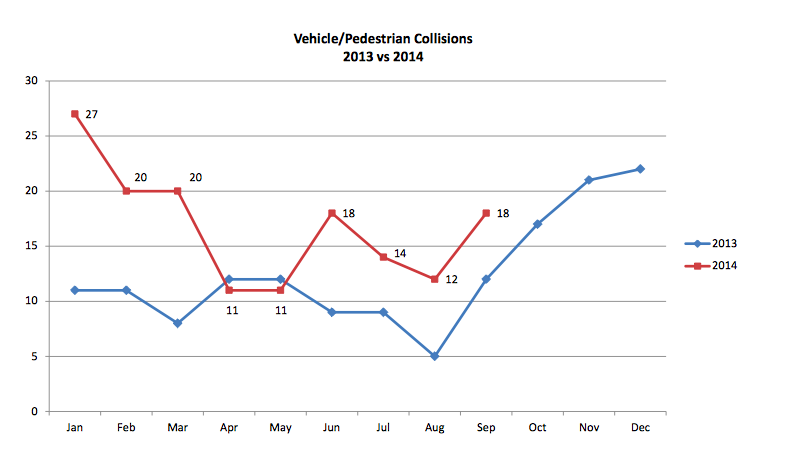 Chronicle Herald reporter Michael Gorman unearths a loose connection between the ill-fated Bluenose project and the sinking of the Concordia. In short, there were two possible agencies that could classify the boat: American Bureau of Shipping and Lloyd’s Register North America. But Lloyds, which was the insurer for the Concordia, was so busy dealing with that disaster that it couldn’t give full attention to the Bluenose bid, and so the arguably less-suitable ABS got the contract.

Having settled into his new job as CAO of Westlock County, Alberta, former Halifax Mayor Peter Kelly has sent a letter to all 56 county employees telling them they should consider quitting their jobs and taking a three-months’ severance cheque, reports the Westlock News. It’s a bizarre offer made even stranger by Kelly’s garbled dismissal of a reporter’s reasonable question about how much the offer will cost the county: “I won’t get into any detail,” he said. “You’re basically on speculation of cost, so that’s unfair to the overall process until we know.”

“A large female snapping turtle was seen laying eggs next to first base of the Musquodoboit Harbour baseball diamond,” reports the CBC. Hope For Wildlife brought the eggs into the organization’s office to incubate, and when they hatched released 48 baby turtles in the Musquodoboit River.

Marilla Stephenson writes yet another column in support of fracking, and once again doesn’t mention climate change.

Mini Medical School (Thursday, 7pm, Theatre C, Tupper Building)—Mohsin Rashid will talk about “Celiac Disease: A Hidden Epidemic,” and Geoffrey Williams will talk on “Abdominal Moans and Groans, Could It Be Stones?”

The application of Aboriginal knowledge in environmental decision-making has been the subject of much debate. Some argue that Indigenous knowledges systems are laden with socio-political values and have no place alongside impartial Western science, whereas others beleive that the two bodies of knowledge are complementary. Conservation biologist Donna Hurlburt will highlight the opportunities for reconciling multiple forms of ecological knowledge through her experiences as a Mi’kmaw person with scientific training who has worked extensively on the conservation of Species at Risk in Canada.

Yesterday I mentioned Darkside Gallery & Cafe, which is to soon open on Windmill Road in Dartmouth. Beyond an anonymously registered web page and a cryptic Twitter account, I could find no further information about the cafe. That’s because, despite the one-word “Darkside” on the webpage and Twitter account, the owners had registered the company with Joint Stocks as the two-worded “Dark Side.” Coincidently, after I posted yesterday a new registration for a one-worded “Darkside” came online. In any event, Darkside is a real thing, to be operated by Oliver and Megan Mahon.

I’ve seen several businesses that can’t decide what their name is. Take, for example, Rogues Roost. Or potentially, Rogue’s Roost. The menu at the bar uses both spellings, and the company’s Facebook Page has the logo, without the apostrophe, right next to a spelled-out company name, with the apostrophe. These are the things that drive copy editors up the wall. 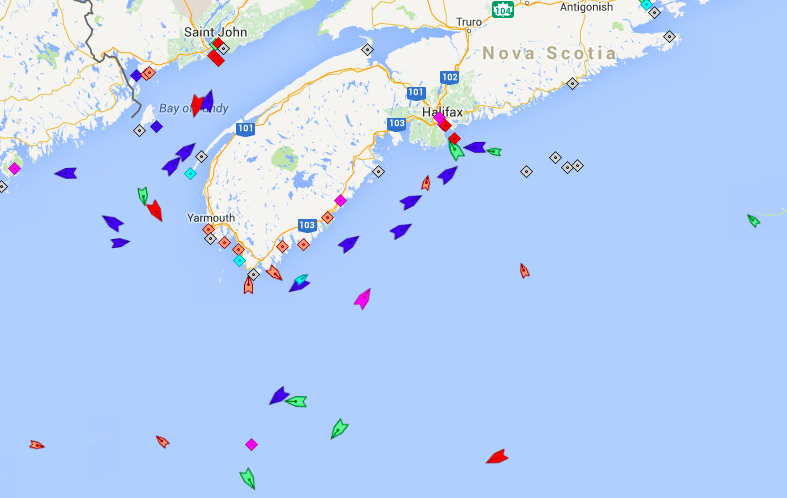 The seas around Nova Scotia at 6am Wednesday. The blue ships are cruise ships. Map: marinetraffic.com