You are here: Home / Commentary / The mass murder isn’t “senseless” in a culture that excuses the violence of white men

After she wrote an article naming “white male terrorism” in the Nova Scotia mass shooting and other mass killings in Canada, Robyn Bourgeois, a woman of Cree heritage, predictably woke up to death threats from white men. Of the many things we were told it was “not the time” for in the wake of the killing, there is always time to threaten and harass women of colour.

It is past time to come to terms with how white male violence is implicated not only in these shootings, but in the ways white men are given license to bully, harass, threaten, and attack women of colour constantly, while it is the women of colour who are silenced.

The concern for it being disrespectful or too political or not the time or pursuing an agenda never seems to extend to confronting the speech of white men, and only ever seems to be dedicated to telling Black women and other women of colour to be quiet. 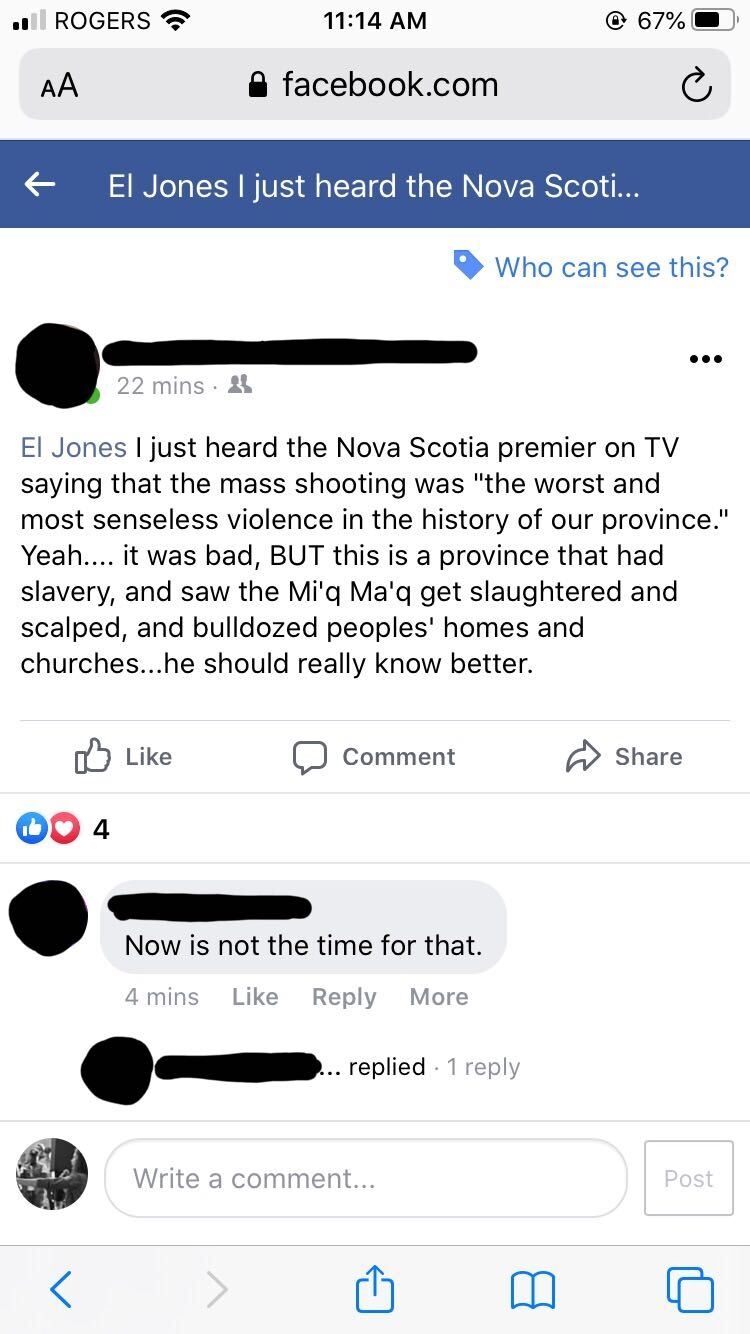 Not tragedy, nor pandemic, nor respect for victims, nor the need to be unified has ever stopped white men from taking time out of their days to harass Black women.

Following an article in the Chronicle Herald about the rise of racism during COVID-19 — while we are being told it’s “not the time” to ask for racially disaggregated data or discuss the impacts of race on health — a white man sent Dr. Rachel Zellars hate mail. Her crime? Discussing how her 14-year-old son was racially profiled and reported to police by white people when he was playing basketball alone in a playground. Here is what white men still have time for during a pandemic:

…If they can’t follow public health recommendations like everyone else, then that area should have been locked down immediately by the authorities so they couldn’t go outside of their community and possibly infect people that actually follow the rules. So again, that is not racism it’s reality. Blacks like to use the race card all the time, so they don’t have to take responsibility for anything, they can just continue to blame everybody else for their bad choices in life. That is nothing new. And FYI,  blacks get more help through affirmative action unfair policies, so if you want to talk about racism how’s that for racism. Why should blacks be rewarded for not being as educated or qualified for a job? It’s not my fault or anyone else’s that most of them lack the intellectual ability to excel. Systemic racism it’s just a left-wing liberal made up term so that blacks don’t have to take responsibility for anything. So spare me your left-wing liberal nonsense, nobody is buying your lies anymore. You have some nerve crying racism when all the evidence clearly shows the Chinese were responsible for the coronavirus, and that here in HRM, blacks were responsible for their own actions and it was perfectly acceptable for their community to be called out for their reckless disrespect for the law. I wouldn’t expect a brainwashed liberal SJW with a mere PhD, which isn’t even a real Doctor, or a BA that anyone can get,  to understand anything that deals with actual common sense, that’s reserved for people who are real Doctors like Dr. Robert Strang, MD

There is nothing unusual about this email. We receive this kind of abuse all the time. Black women are not the ones committing mass acts, and yet while men like this receive no social sanctions, all kinds of energy is devoted to policing us and telling us how and when we can speak.

This shooting is constantly referred to as being “senseless,” despite it following well-worn patterns of male violence that occur over and over again in mass killings. But beyond the extreme violence of this shooting is the everyday background of white male aggression that is just what we are expected to put up with. “Nobody takes them seriously,” we are told when we are harassed in comments sections, in emails, online, as if not taking white men’s threats seriously isn’t what brought us here.

There are hard questions to be asked of a culture that constantly polices the words of Black women while overlooking the acts of white men. Why can’t we understand how the impunity with which white men are allowed to threaten, to follow around, to fixate and to harm connects to how GW was able to move in silence until it was too late? Our culture continues to give white men a pass and then act shocked in the aftermath.

Alexandre Bissonnette had a history of harassing women online. Nobody reported him. Such behaviour is just normal. The majority of mass shootings begin with domestic violence, yet it is only in hindsight that people identify the red flags.

The RCMP has told us that GW’s movement across the province was “greatly facilitated” by the fact that he was dressed as a police officer. What is not being said directly is that this movement was possible because GW credibly looked like a cop. While Black officers report racial profiling by their fellow officers, GW was able to amass multiple police cars and an authentic police uniform. RCMP spokesperson Darren Campbell said he was “not aware” of any concerns raised by neighbours.

Consider this in the context of street checks, the purpose of which is not only to stop and surveil Black people, but to gather and hold our data. While this information is preserved, the RCMP repeatedly told us GW was not “known to the police” and “had no record” despite a previous conviction for an assault on a minor, as well as reported incidents with his neighbours and with the police.

Whiteness granted GW an immunity from a culture that continues to allow white men to act how they want, say what they want to whoever they want whenever they want and however they want without question. The default assumption is that the women they abuse — particularly women of colour —  did something to deserve it.

Until we come to terms with the ways we treat the violence of white men as natural and expected and nothing to pay attention to other than to shame its victims, we should not be surprised when the violence they so often threaten becomes a reality.