1. Shooting: one man dead, one close to death

At 22:58 hours Halifax Regional Police responded to the 2000 block of Gottingen Street in relation to multiple calls of shots fired. Upon arrival officers encountered two males in a vehicle. Emergency Health Services were immediately called to attend to injuries they had sustained. At this point we are in the early stages of investigating a suspicious death, as one of the males was pronounce deceased at the scene, while the other was transported to the hospital with life threatening injuries.

And a second email at 6:30 this morning:

In relation to the shooting incident overnight, Halifax Regional Police have (sic):

These closures are to allow HRP Forensic Identification members to process the scene.  The Halifax Regional Police ask for the publics patience in the matter and request that they consider alternate routes around the Gottingen Street area.

A subsequent release will be issued when the roadway has been reopened, at this time this closure is anticipated to last a further 1 to 2 hours but is subject to change as the investigation progresses.

There’s no additional information as of 7:30am. 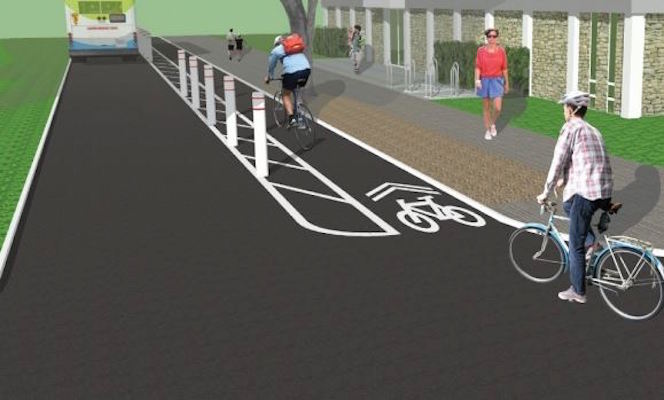 “I must resist the applicant’s call to interfere with the fair and proper actions of Halifax’s Council and professional staff. Absent a process that is demonstrably offside or shown to be in bad faith (not surprisingly, given the evidence, there are no such allegations here), the court is loathe to interfere,” Justice James Chipman said in his written decision.

“In reviewing the totality of the evidence, I fail to see any basis to allow any aspect of what is sought by the applicant and intervenor. Accordingly, I dismiss the application in its entirety.”

Reddick normally parks his van near his hot dog stand in what’s clearly labeled a no parking zone, said the judge.

Reddick testified that food safety regulations required him to keep his van close by and that he couldn’t leave his stand to get supplies with customers in line. But the judge pointed out that Reddick, an active Twitter user, had used the social media platform to tell his followers that people who thought the bike lane would close his business were wrong. “I was only fighting for my parking spot,” he Tweeted last July – a message he refused to acknowledge in court pertained to the matter at hand, saying instead he was talking about a parking dispute with his landlord on Shirley Street.

Reddick tried to claim he wasn’t properly consulted over the bike lane. But the judge said the vendor attended an open house and a council meeting last year about the project.

“Though he would not admit it when the written records were put to him, the documentation clearly supports the fact that he participated in the process,” Chipman said. 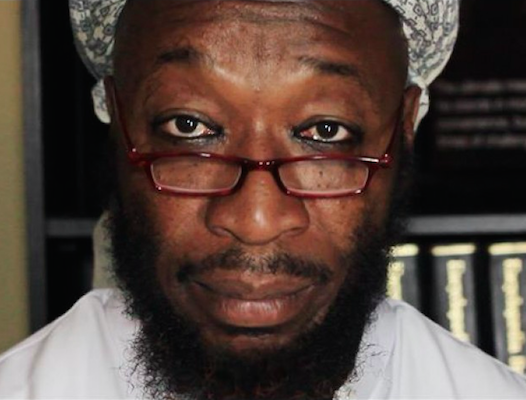 Incidentally, Chipman was a law school classmate and friend of Peter MacKay. Last year, the NDP made a stink about MacKay, then Justice Minister, appointing many of the guests at his wedding — including Chipman — to the bench.

I have no idea about the legal ability of the other wedding guests, but I’ve seen Chipman in action: he is the judge who released Glen Assoun from prison. He conducted the hearing with the gravity and compassion required for the occasion. The hearing had been scheduled for five days, but the judge made clear that Assoun was to be released the very first day; as I recall, his exact words to Assoun were “you’re not going to spend another night in jail.”

I guess that’s the life of a judge: one day you’re contemplating a miscarriage of justice that landed a man in prison for 16 years for a murder he probably didn’t commit, and another day you’re sorting out whether a hot dog vendor can park in a no-parking zone for the rest of history.

“The preferred concept plan for the redevelopment of the Shannon Park site in Dartmouth will be unveiled at a meeting Wednesday night,” reports Pam Berman for the CBC. “The Canada Lands Company, which is in charge of the project, presented three different options in November. The latest design will be a hybrid based on public feedback.”

Yesterday, the Dalhousie Board of Governors approved a $2,000 tuition increase. Afterwards, students laid down outside the closed-door meeting, and President Richard Florizone had to step around them.

I keep hoping that one day people will learn to hold their phones horizontally when videotaping. I also hope for world peace.

Last night a half dozen people emailed me an analysis of event bookings for the new convention centre, alleging that future bookings are down from what was held at the old convention centre. I have no reason to think that’s wrong, but I haven’t yet been able to independently verify the numbers. I’ll have a longer look today.

“Today’s budget is as status quo as you can imagine,” writes Graham Steele:

Any new spending is symbolic at best. There’s no wow factor, like the free tuition for low-income families recently announced in New Brunswick.

More funding for early childhood education — a good news item promoted by the Liberals in advance of the budget —was bereft of details. We’re left applauding the idea, even though we have no idea how it will work.

Now that the third budget is out of the way, the decks are clear for the Liberals to start telling a simple pre-election story.

If Nova Scotians buy into the “steady hands” story, there really is no reason to change governments when the election rolls around in 2017, is there?

Robert Devet zeroes in on the social assistance part of the budget:

Meanwhile, shelter allowances, never adequate in the first place, have remained frozen since 2006.

Single people get $300 per month for rent. A single person who lives with disabilities gets $535.

If you could ever rent a decent place for that kind of money, you certainly can’t these days.

For people who depend on social assistance this $20.00 is like a drop in a bucket.

“This is classic Stockholm Syndrome stuff. We make you sleep in your own feces night after night. Then one night, out of the blue, we let you sleep on an old mildewy mattress. It’s horrific, but feels like an upgrade. That’s our budget,” says Delorey, who added “that’s why today’s announcement is taking place in a torture chamber.” 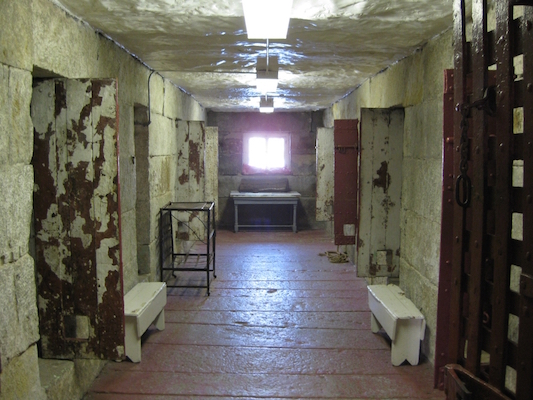 The old jail in St. Andrew’s, New Brunswick. Hutchings’ cell is one the left at the end of the hall.

In 1942 a young Royal Air Force sergeant named Tom Hutchings was stationed near St. Andrews, New Brunswick, a small village near the border with Maine that looks like something straight out of a Stephen King novel. He left a dance one night with a pretty local girl named Bernice Connors who was found murdered the next day. Hutchings was convicted of the crime and hanged in December 1942. He spent his final days in a small, dark, cold cell in the jail, within earshot of where his executioners constructed the gallows.

By all accounts Hutchings was a model prisoner, passing the time quietly. He made his way to the gallows without a struggle and had nothing to say by way of a final statement.

Unfortunately for him, however, the gallows hadn’t been built correctly. Instead of the quick death that he might have been expecting, it took Hutchings twelve minutes to be pronounced dead (some reports claimed it was eighteen minutes). Ever since, people have reported strange occurrences in the jail, and in his cell in particular, which led to speculation by the locals that the gruesome nature of his death had somehow trapped Hutchings’ soul in that spot, destined to haunt it for all eternity.

Given the circumstances it seemed to me that his old jail cell would be an obvious spot for an episode of Ghost Cases, the 13 episode series I wrote, produced, directed and co-hosted (with good friend Holly Stevens) in 2009 for Eastlink.

Go here to find out what happened.

I usually have my breakfast prior to reading the Cape Breton Post in the morning.

Thankfully on April 1 I didn’t follow my normal routine.

As I read the rail letter, all the content presented was supportable. Yeah, I said to myself, the railway is essential. It must be protected, improved and continued. It is not an option to abandon it.

Our provincial government, I reasoned, over the last two years has spent over $40 million on the Yarmouth ferry and now has signed a new 10-year agreement with Bay Ferries for continued service. Over that span of time, an additional amount – likely over $100 million of new money – will be spent for a service that only operates for four or five months out of the year.

In addition, even though the Americans are putting zero dollars into this service, the ferry must be manned by American crews. No truck transport is allowed  (the American port city will not allow this.). Yeah, this means no lobster or other goods can be shipped on this ferry.

In the meantime, to repair and bring our rail line up to operating standards would cost about $30 million over five years. At least that’s what the analysis of the line concluded. As everyone, I’m sure, realizes the railway runs 12 months throughout the year how could the provincial government not justify such an expenditure for a year-round service which is essential and critical to Cape Breton’s economic survival going forward. Regulatory changes to mandate CN to ship via rail to North Sydney must be a given.

On another note, many Roman Catholic parishes have had reserve funds depleted in recent years. This was not of their choosing. Parishioners contributed those funds, in good faith, for the use of their respective parishes. Those same parishes and their parishioners were not involved with the sexual assaults that resulted in the class action against the Diocease.

One result of this action is that parishes have been amalgamated, churches closed and properties sold for “substantial salvage value.” I do not believe this to be fair to the parishioners who, in good faith, contributed those funds and who built those churches.

It is a good thing that I didn’t eat breakfast for I would most definitely be on the verge of losing it right now.

Public Meeting: Case 20284 (7pm, Hammonds Plains Consolidated School) — Ekistics Plan & Design is looking to get approval for a development agreement that would allow them to build a nine hole golf course at 2108 Hammonds Plains Road.

In an era of online sharing and ubiquitous computing, an internet that never forgets poses a complex challenge to privacy, reputation and freedom. Is the EU’s new ‘RIght to be Forgotten’ a solution? What is the nature of this legal right? Does it strike a proper balance between privacy and free expression? Has it worked in the EU? Would it work here? 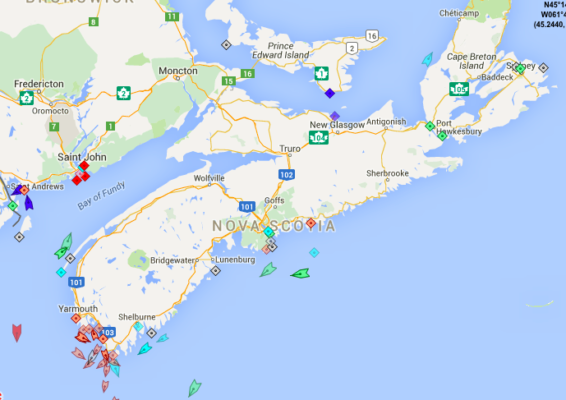 The seas around Nova Scotia, 8:25am Wednesday. Map: marinetraffic.com

The HMCS Montreal is moving about the harbour this morning, and one Navy ship (I don’t know if it’s the Montreal or not) is scheduled to depart at 2:30pm.