You are here: Home / Featured / The last time the Judicial Council issued a decision, it was a slap on the wrist: Morning File, Monday, March 6, 2017 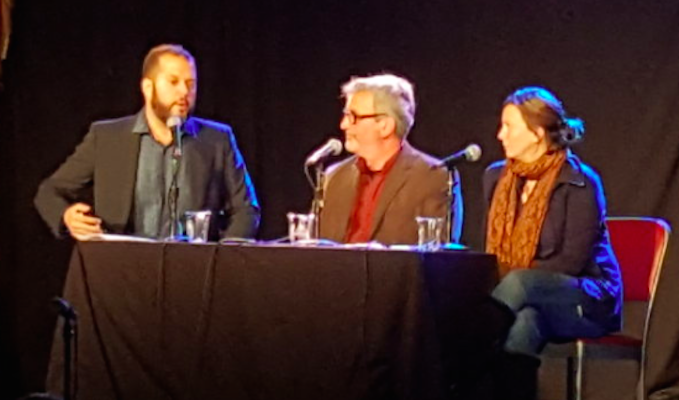 Friday night, Canadaland’s Jesse Brown dropped into The Marquee and asked me and Terra Tailleur “Is Atlantic Journalism Fucked?” As usual, Tailleur came prepared with reams of facts and figures. And also as usual, I opined.

It was great fun, and thanks to all the people who made it come together: Brown and Tailleur, to be sure, but also Canadaland producer Russell Gragg, Examiner office manager Iris, all the CKDU volunteers, and Victor Syperek and his excellent bar staff.

The Canadaland podcast can be found here. We’ll have excerpts on this week’s Examineradio podcast.

Haligonians are outraged at last week’s decision by a Nova Scotia judge to acquit a cab driver of sexual assault. Judge Gregory Lenehan determined that the Crown hadn’t provided sufficient proof of lack of consent, despite the testimony of an expert witness and the fact that the alleged victim was found unconscious by police as the driver was pulling up his pants. 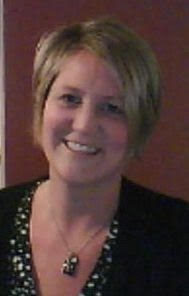 We speak with Susan Wilson, a program coordinator with the Avalon Sexual Assault Centre, about the incident in question, the low rates of reporting of sexual assaults, and how the miniscule conviction rate is discouraging victims from reporting.

In other news, former premier Darrell Dexter peddles weed, teachers plan to remain pissed for the next four years, and cops still can’t track down their missing evidence.

The Avalon Centre Report referenced by Wilson is available here, while Robyn Doolittle’s groundbreaking series, Unfounded, can be read here. 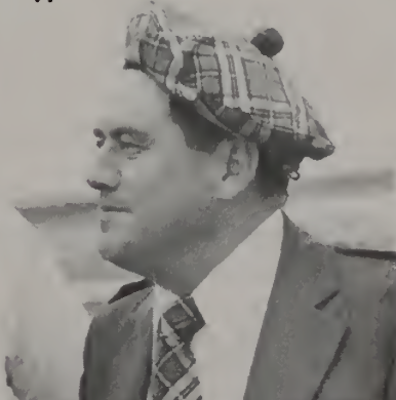 Friday morning, I mentioned former judges Raymond Bartlett and Lewis Matheson, both of whom were subjects of Judicial Council decisions. Later in the day, Examiner court watcher Christina Macdonald went to the Legislative Library in search of those decisions, and found the June 1996 decision concerning Matheson. (We’re still hunting down the Bartlett decision.) I believe this is the last time the Judicial Council issued a decision.

Before he was a judge, Matheson was a crown prosecutor who “said that a fence should be built around the nearby Eskasoni reserve to prevent the Natives from going to Sydney to cause problems.” However, the Judicial Council was responding to his actions as a judge.

The Judicial Council decision noted that a man named Colin Boutlier was charged with breaking down the front door of his estranged wife’s house, to which Matheson commented that “I don’t know, even having heard everything that was said, whether it’s your own fault or you happen to have a very sensitive mate who is easily rattled.” The judge went on to sentence Boutlier to probation (and said he would amend the order to include paying for fixing the door). Thirteen days later, Boutlier killed his girlfriend.

When I hear of his girlfriend’s death and his attempted suicide, I went to pieces. “That could have been me.” Several days later I hear the remark made by Judge Matheson. My first reaction was he had no right to say that. He doesn’t even know me or what I have been through or what I’m going through. Given the circumstances, I guess I had every right to be sensitive and even easily rattled.

On the Boutlier matter, the Council decided that:

…Judge Matheson did not intentionally attempt to demean Mrs. Boutlier, nor does it find that Judge Matheson has an underlying disrespect or antipathy to female participants in the court process in general or female complainants in domestic violence matters in particular. On the contrary, many of the witnesses before the Judicial Council described Judge Matheson as a gentleman.

That earlier case, you’ll recall, involved comments Matheson made before sentencing a 42-year-old man to jail for sexually assaulting two 15-year-old girls and a 12-year-old girl: “What is most serious about this, is that it involves children …If these were 35-year-old women, women that (the perpetrator) had done this to, I might smile and throw this out of court.”

The Judicial Council went on to “caution” Matheson.

However, there was a second complaint to the Council from Bonnie Nicholson, who worked with the Cape Breton Transition House. In response to the decision involving the sexual assault of the three girls, Nicholson told the Chronicle Herald that she wouldn’t want to be a woman in Matheson’s court, and said that unlike other judges, Matheson had never toured the Transition House.

Some time later, Nicholson found herself before the judge on a traffic matter. She asked for a delay and a change to another court, a request that Matheson granted, but not before laying into Nicholson in a packed courtroom, essentially calling Nicholson a liar. The decision notes:

It is the opinion of the Judicial Council that Judge Matheson’s actions…were premeditated and grossly inappropriate. It amounted to a personal attack on a member of the public while he was performing a public duty. To date, Judge Matheson appears unrepentant.

The Council “reprimanded” Matheson for his verbal attack on Nicholson.

A “caution” and a “reprimand,” neither of which materially affected Matheson’s career or pay, don’t seem to be much of a disincentive for Matheson (or other judges) to continue with such behaviour. I’m sure some of my lawyer friends will argue otherwise, that the decision brought reputational harm to the judge…. well, maybe; but getting a sideways glance at the country club hardly compares to being called a liar by a judge in open court.

I’ll update this page later with a link to the entire decision (it’s too large for me to deal with right now). 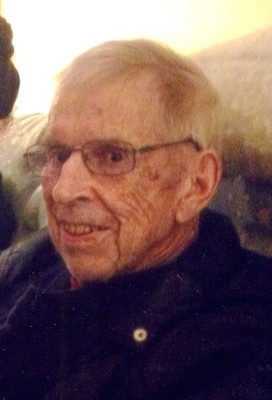 “When I was a young CBC reporter back in the 1970s, I got a tip from a source inside the department of health that the RCMP was investigating a Shubenacadie doctor named Ross McInnis for MSI fraud,” writes Stephen Kimber:

I didn’t realize it at first, but I would later discover it was the first health care fraud investigation ever initiated by RCMP officers directly rather than as the result of a routine audit of a doctor’s billing records.

A few weeks after the report was broadcast, I got a call from McInnis who wanted to share his side of the story.

Over the course of eight hours one day, he laid out his strange, shocking tale, all of which I was eventually able to independently verify.

Kimber goes on to relate repeated instances of police malfeasance against McInnis, and notes the parallels between McInnis’ case and the story of Lyle Howe, who Kimber profiled last week.

Click here to read “The Lyle Howe case: ‘If you look hard enough…’”

Grants Committee (Monday, 1pm, City Hall) — in which we give a bunch of yacht clubs a break on their taxes, because people who join yacht clubs are hurting financially, or something.

Web Applications (Tuesday, 11:30am, Room 430, Goldberg Computer Science Building) — Some guy named Luke will speak on “Performance Beyond Your Portfolio.” Luke doesn’t appear to have a last name, but maybe you don’t need one when you’re the uber geek:

With over a decade of experience, Luke is no stranger to the ins and outs of the web. He has experience across several different web technologies on both the front end and back end. Luke has worked on and led a number of different, prominent sites and projects for a large list of big international clients, including Cartoon Network, MTV, and Nickelodeon. When he’s not fiddling around on his machine, you can catch him watching Jays games with craft beer in hand and obsessively managing his fantasy baseball teams.

4am: CSL Tacoma, bulker, sails from National Gypsum for Baltimore 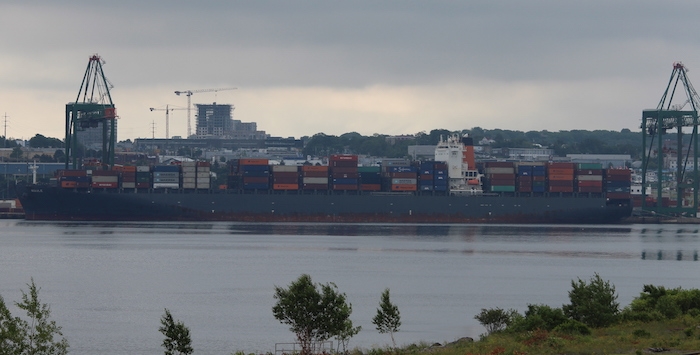 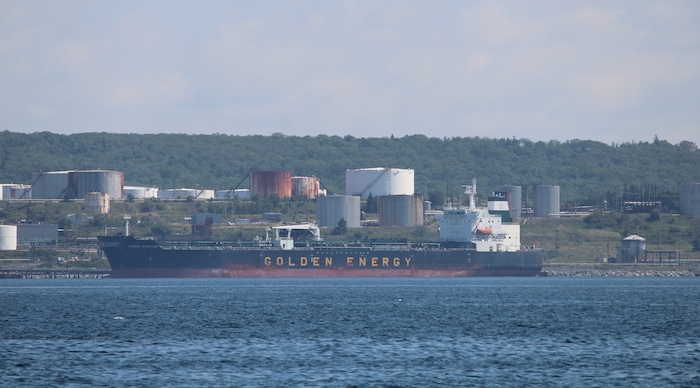