News
Government
On campus
In the harbour
Footnotes 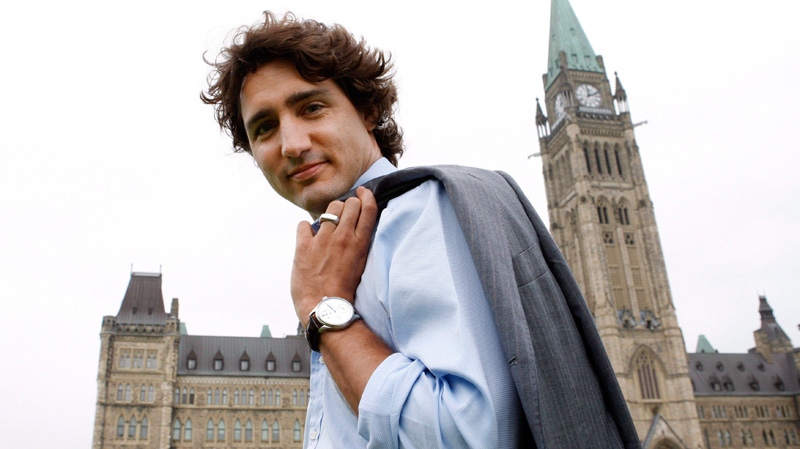 The Liberals ran a great campaign, so congratulations to Justin Trudeau, all the local candidates, and the people on the ground who did the bulk of the work. You deserve your victory.

I don’t have much insight into federal politics, and have no idea what’s running through voters’ minds. But the scale of the victory — the Liberals swept every seat in Nova Scotia, even defeating the NDP’s Peter Stoffer, who I thought owned his Sackville riding forever — suggests that the citizenry was in no mood for mixed messages and simply wanted the Conservatives out, and the Liberals presented the most coherent option. Fair enough. The people have spoken.

I have fears, however, and I would have had the very same fears had the NDP won the election: I don’t think the dictatorial powers Stephen Harper assumed for himself and the PMO are easily given up. The concentration of decision-making in the PMO, the ultra-tight control of communications, the overriding of the civil service, and the debasement of policy for political ends served Harper well — until they didn’t. Trudeau and his team should see that Harper’s overreaching power grab ultimately did him in. But I’m afraid that they’ll reach the opposite conclusion and decide Harper didn’t wield power adeptly enough, and — just as Barack Obama assumed and extended the constitutional abuses of his predecessor — Trudeau will double-down on Harper’s unprecedented abuse of power.

It’s the way our society is going. All institutions — from corporations to universities to churches to charities to governments of all stripes — are all about branding, message control, centralized power and, above all, no tolerance for dissent.

The complete top-down control of institutions is attractive to those at the top, and makes some institutional sense in the very short term. But beyond the next press release and, just maybe, the next quarterly return, centralized power doesn’t work. The truism is false: Mussolini did not make the trains run on time. The iron-clad grip that Richard Butts has on City Hall gives us a balanced budget; it doesn’t get the snow plowed. Darrell Dexter’s Harper-like message control got the whole province singing along about ships; it didn’t do squat for the underemployed and underpaid. The Conservatives duct-taped the mouths of scientists and protected the flow of profits to oil companies, but they didn’t change the reality of climate change.

We need dissent. We need the internal dissent of the bureaucrat calling bullshit, the dissent of the scientist freely explaining the world, the dissent of the back-bencher representing a local concern that goes against PMO policy, the dissent of an enraged segment of society taking to the streets. To be sure, these expressions of dissent break message, but they bring a wider view of the world, help make governments more flexible and more capable of responding to the unpredictable, and ultimately bring a societal wisdom that serves everyone well. Dissent makes us a better country.

Canada spoke with one loud, determined voice yesterday: the nation rejected Harper and the abuse of power that Harper represented. The very first order of business for the new government must be the reversal of the abuse of power. The spy state must be dismantled. The civil service must be allowed to operate separately from political concerns. Scientists must be freed to speak and publish as they wish. Government communications must be about providing true information and not about message control.

Again, I fear Harper’s centralization of power won’t be willingly given up. It’s not enough to hope that Trudeau does the right thing — it isn’t up to him. Now is the time for regular people to act. In this brief moment as the Liberals form a government, we should all demand that the abuses of the Harper decade be reversed.

The Liberal campaign raised good ideas, bad ideas, so-so ideas. So be it. We can and should debate policy forever. What’s not debatable, however, is the need for a free, open, and democratic government.

City Council (10am, City Hall) — I’ll somehow drag myself there and live-blog the meeting via the Examiner’s Twitter feed, @hfxExaminer.

On this date in 1785, Nova Scotia’s Fifth Assembly, the so-called “Long Parliament,” ended after 17 sessions, having started on June 6, 1770. Explains the Canadian Parliamentary Review:

Although the modern pattern since Confederation has limited the length of the Assemblies to a maximum of five years, such was definitely not the case in the decades following the achievement of representative government in 1758. For example, the Sixth Assembly existed from October, 1785 to January, 1793 with seven sessions. However, the Fifth Assembly stands as the paramount example of legislative duration. Known as the “Long Parliament,” that Assembly endured for seventeen sessions. from June 6, 1770 to October 20, 1785. Questions of representation were intimately linked to such a pattern.

The dominance of the Halifax establishment around the offices of the Crown was maintained, in part, by holding meetings of the Assembly when the country members were least able to attend. In response, country members would refuse to take up their seats and the Assembly would declare those seats vacant, The voters would then select another individual. who would also refuse to attend. A total of twenty-nine seats were declared vacant during Nova Scotia’s “Long Parliament”. 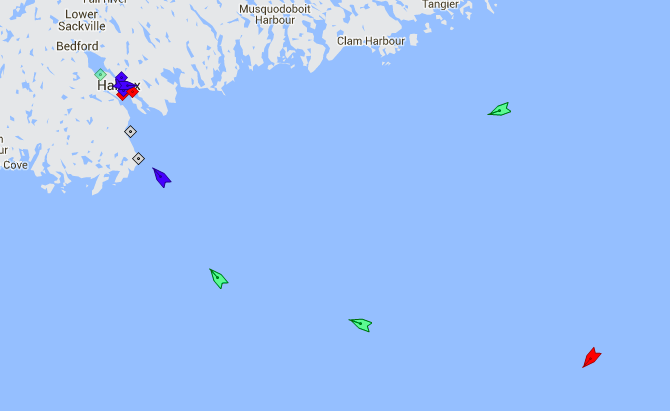 The approach to Halifax Harbour, 8:30am Tuesday. The blue ship is the Grandeur of the Seas cruise ship, followed close behind by car carrier Asian Emperor and the container ship Budapest Express. Oceanex Sanderling is off Clam Harbour. The red ship passing by is the oil tanker America’s Spirit, on its way to New York. Map: marinetraffic.com

The cruise ships Crystal Symphony (up to 940 passengers) and Grandeur of the Seas (up to 2,446 passengers) are in port today.