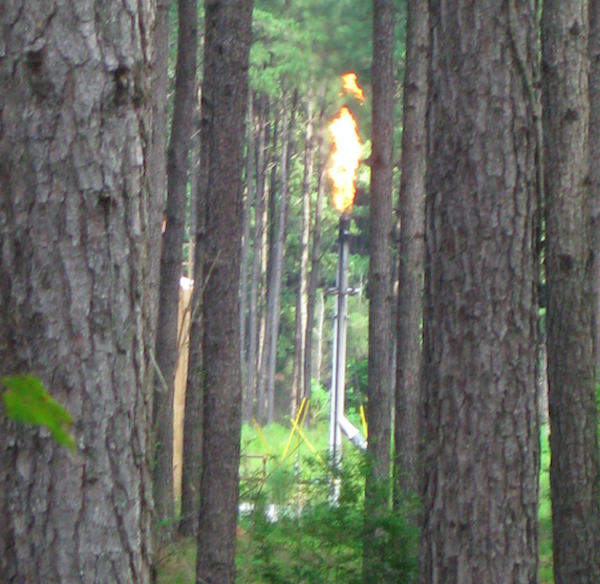 “On the same day that Nova Scotia’s governing Liberals introduced legislation to ban high volume hydraulic fracturing in the province, I happened to be on a ‘fracking tour’ in the U.S. with a bus load of other environmental journalists in a place that had instead embraced it,” writes Linda Pannozzo.

That news was met with glee from the journalists and researchers who had long seen firsthand the effects of fracking. But now, four years later, the push is on to reopen the fracking debate in Nova Scotia.

Pannozzo notes that there was never actually a legal ban on fracking — the 2014 legislation was passed by the legislature but never proclaimed — and the newly released Onshore Atlas of shale oil deposits (and the oversold promise of riches) is ignoring the substantial risks associated with fracking.

This article is not behind the Examiner’s paywall. But maybe subscribe anyway so we can continue to publish Pannozzo’s fine work, eh?

The Immigration and Refugee Board yesterday ordered Abdoul Abdi to be released from custody, according to a tweet from his lawyer:

UPDATE: #AbdoulAbdi has been ordered released from detention by the Immigration and Refugee Board. He will likely be transferred to a halfway house tomorrow. Canada continues to pursue his deportation. 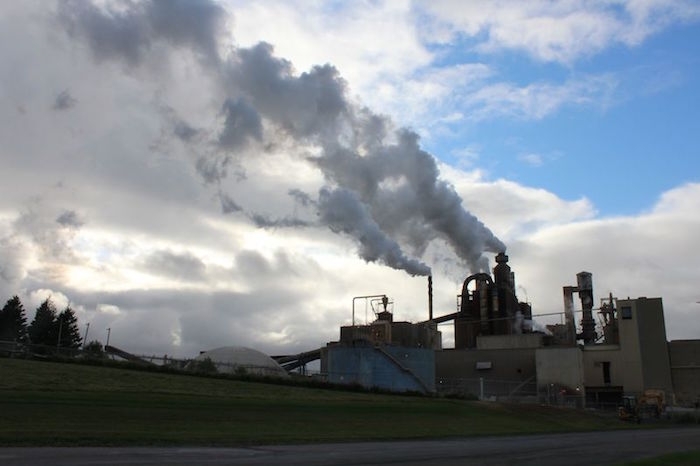 Last Thursday, I wrote about the latest Chronicle Herald advertorial:

And then there’s advertising disguised as news stories — “advertorial.”

Apparently, after the PR disaster of shutting down a book signing by Joan Baxter, author of “The Mill,” Northern Pulp mills feels it needs to buy some positive PR. Yesterday, the Chronicle Herald published a piece of “sponsored content” — sponsored by Northern Pulp — responding to environmental critics of the mill.

I don’t know if the average reader understands what “sponsored content” is, but Northern Pulp and the Chronicle Herald must think they’re pulling the wool over at least some readers’ eyes, because otherwise they’d simply call it “advertising,” right?

Again, this isn’t journalism. It’s a disservice to readers.

The “sponsored content” was an “article” headlined “Bleached Kraft Mills cannot be Closed Loop.” That article shows up in Google News searches as actual news, so the Herald evidently made no effort to keep it out of its normal news feed to Google.

Since then, there’s been a remarkable series of articles written by real reporters profiling the mill and its operations published in the Herald and the Saltwire-owned New Glasgow News (Saltwire is the parent company to both the Herald and the News).

The series started on Saturday, when the Herald and News published a piece by veteran Herald reporter Aaron Beswick headlined in the Herald as “The inner workings of the Northern Pulp kraft mill.” Beswick writes:

Since opening in 1967, Northern Pulp has been both a source of economic activity and controversy in Pictou County. Both will be addressed by this series over the coming days as it attempts to lay out the facts in black and white to inform an important discussion about the mill’s role and future in this province.

But beyond the headlines Northern Pulp is also a community of 339 Nova Scotians who make 270,000 tonnes of kraft pulp annually.

Now, it makes sense for journalists to cover a major corporation in a small town, especially when there are important resource and environmental issues at play. That’s a proper subject for journalistic investigation. In her article “Dirty Dealing,” for instance, Halifax Examiner contributor Linda Pannozzo covered the potential effects on the Northumberland Strait lobster fishery presented by a new plan to dispose of Northern Pulp effluent.

But with Saltwire’s Northern Pulp series coming right at the heels of “sponsored content” in the Herald, disguised as news and paid for by Northern Pulp, we’ve got to examine motives.

Was the idea for the series arrived at independently by newsroom journalists, or did Herald management direct the newsroom to cover Northern Pulp as part of a package sales deal with Northern Pulp?

I asked Beswick for comment and he hasn’t responded. So I can’t speak to motivations, but I can speak to content. I don’t know if it’s by design, authorship, or through editing, but Beswick’s article strikes me as PR Lite — it is basically a series of uncritical profiles of mill employees and how they do their jobs. The article does include a bit of information about environmental complaints over the mill operation, but that information is not detailed and it appears very far down in the article

That’s followed today by an article by News reporter Sam Macdonald, headlined “Here’s how Northern Pulp says its effluent treatment plan would work” [Update: according to Linda Pannozzo, the original headline on the article was “After years of controversy, Northern Pulp is cleaning up it’s act.”] As with Beswick’s article, contrary views are not detailed and appear very far down in the article — in the last two paragraphs of of a 24-paragraph article — only to be dismissed in the closing sentence:

The pipeline has been under fire by local environmentalists and members of the fishing community, who are concerned about the impact of what will come out of the line. Protests have been held in the past few months to express opposition to the project.

Some opponents have called for a closed-loop system in which all effluent waste would be cleaned and reused in the plant, basically eliminating the need for the pipeline. However, both the mill and experts experienced with this type of bleached kraft pulp method have indicated a closed loop system would not work due to the process.

Who knows? Maybe the two reporters had no marching orders from management and each decided to write an uncritical article about mill operations. That happens. But it’s impossible to separate the mill’s purchase of sponsored content from the reporting. It sure looks like a package deal.

This is the problem with “sponsored content” and advertorial: Once you’ve decided to turn the news pages of your publication over to advertisers, even honest news coverage becomes suspect.

“A report showing Halifax Transit buses struggled with being on time last summer comes as no surprise to Ken Wilson, reports Yvette d’Entremont for Metro:

The president of the union representing Halifax Transit operators said the construction that wreaked havoc for drivers was bound to impact industry standard targets.

It shows that buses were on time 73 per cent of the time. The report notes that transit industry standard targets range between 85 and 90 per cent.

“It was the worst construction year in history as far as we’re concerned, and this (statistic) is a result of that,” Wilson said.

For sure, this isn’t a problem with the drivers, and as Wilson says, the increase in construction — especially, but not limited to, the Macdonald Bridge and Bay Road closures — has pushed the late bus numbers skyward. Downtown construction is also a huge component.

Additionally, however, is simple congestion: a bus stuck in traffic is going to be a late bus. Transit advocates have long pushed for bus lanes and queue-jumping lights, and there’s some hope we’ll start seeing more of those. That’s a good start.

Yet it’s simply a given for the #1 bus: the three buses heading to downtown from Mumford after 5pm — three buses that are supposed to arrive 10 minutes apart at Dalhousie, at 5:15, 5:25, and 5:35 — will not only be late, but will all arrive at the same time, usually around 5:40, but sometimes also with the fourth bus, at 5:45. This bunching of buses is caused because the outbound buses, leaving downtown for Mumford, were caught in downtown traffic at 5pm. They got to the end of their route at Mumford and then turned back for downtown, but they were all late, and all together.

The dedicated bus lanes and queue jumping lights are a partial solution, but this particular schedule problem has been going on for years, maybe decades. Transit could just build it into the schedule. Better yet, if we really want to avoid it, add new buses — that is, buses that weren’t already on a route — that will depart Mumford at the correct scheduled time. That of course would double the cost for drivers — instead of three drivers driving three buses, we’d have six drivers driving six buses — but it would bring honesty back to the schedule, and this is, after all, the busiest route in the system. 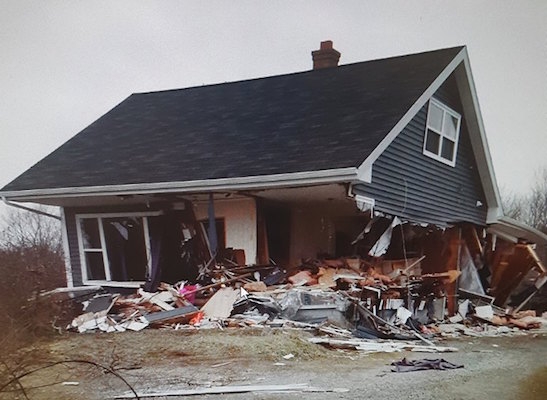 “In the 50 years he has lived on Seaview Drive, Gary Standing has never seen anything as ‘crazy’ as watching a person drive a front-loader tractor into a home,” reports Nikki Sullivan for the Cape Breton Post:

“It was a pretty crazy morning, to say the least,” he said, during a phone interview with the Cape Breton Post on Monday.

“He was smashing into the (power) pole out there and I hollered to my girlfriend, ‘Oh my God he is doing this on purpose.’ And then I seen him turn around and he went ‘whoosh’ right into the house.”

Neighbours and other people say a woman and two children live in the home. Cape Breton Regional Police confirm no one was in the house when the incident occurred.

After the person in the front-loader tractor left the scene, he drove to the Nova Scotia Liquor Corporation outlet on King Street where police found the heavy machinery.

Police have arrested a 51-year-old man who is in custody. Charges are pending as the investigation continues.

Police confirm the man and the homeowner are known to each other.

Standing must be new to the neighbourhood because back in the 1990s another Seaview Drive house was destroyed by backhoe, at least according to a wide-ranging discussion on the Cape Breton Rant Room Facebook page. “Def remember this happening before at least once,” wrote one commenter, which is enough confirmation for me.

That 1990s-era demolition must have been the inspiration for the 2010 episode of the Trailer Park Boys, in which Lahey destroys a trailer with a backhoe. That episode in turn may have inspired yesterday’s destruction.

Our snow drought is evidently over. 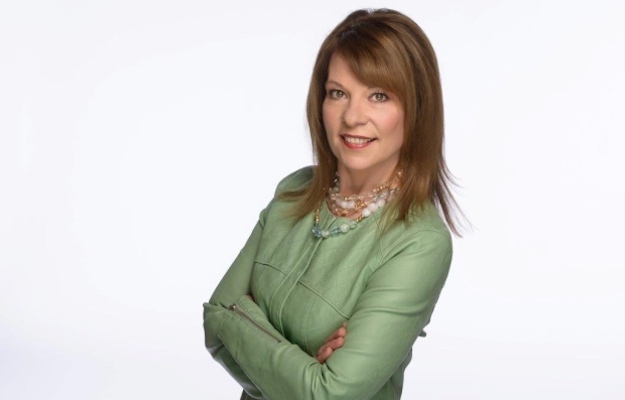 Cindy Day has broken my heart.

City Council (Tuesday, 10am, City Hall) — here’s the agenda. Most notably, a public hearing is scheduled for 6pm to consider the Willow Tree proposal.

Public Accounts (Wednesday, 9am, Province House) — Paul LaFleche, the deputy minister at Transportation and Infrastructural Renewal, will be asked about the Highway 104 Western Alignment Corporation.

Architecture Lecture (Wednesday, 6pm, Room B225, B Building [Engineering], Sexton Campus — after hours, enter via the link west of the Sexton Gymnasium) — Nuno Grande, from the University of Coimbra, Portugal, will speak on understanding the relationship between culture, city, and architecture, and the role of cultural facilities within the urban regeneration process. 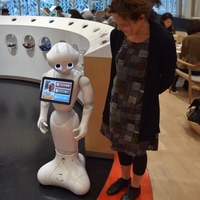 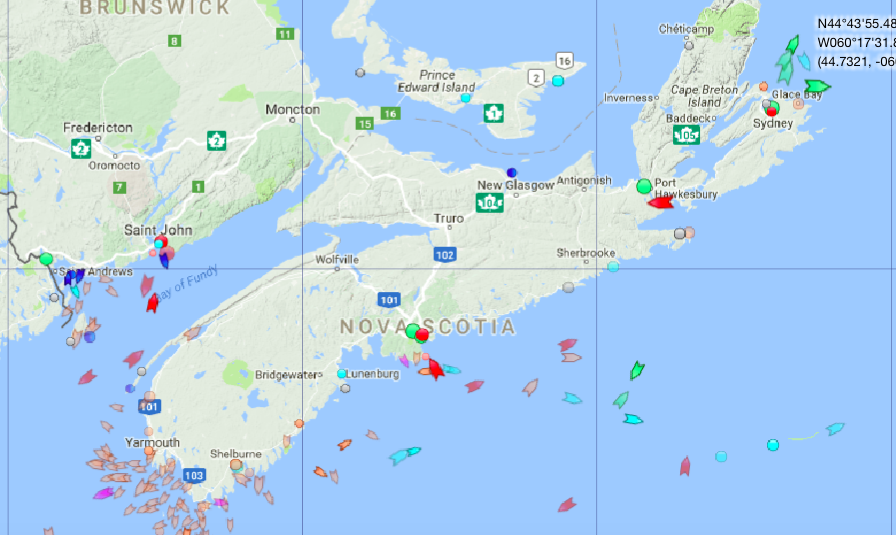 The seas around Nova Scotia, 9:40am Tuesday. Map: marinetraffic.com

Council today… I’ll get there, but first to shovel…