You are here: Home / Featured / The Halifax Examiner is one year old today

The Halifax Examiner is one year old today. I made the site live with a promotional video announcing the Examiner on Wednesday, June 18, 2014; here it is:

By the time I made the site live, it also contained a bunch of older stuff that I had previously written on my own blog. As I recall, I posted something two days later, on Friday, June 20, but I can’t remember what it was except that I said something like “I’ll start posting real stuff on Monday.” Then, I did my first Morning File on Monday, June 23, 2014. Back then, I was publishing Morning File by 7:30am… that morphed to 8am, then 8:30am, and now to 9am, as I find I just go on and on about stuff. But I think it’s fair to say that the Halifax Examiner came screaming out into the world at 7:30am on June 23, 2014.

I gave that time of birth to Examiner reader and astrologer Ariel Harper Nave, and she produced the following astrological chart for the Examiner: 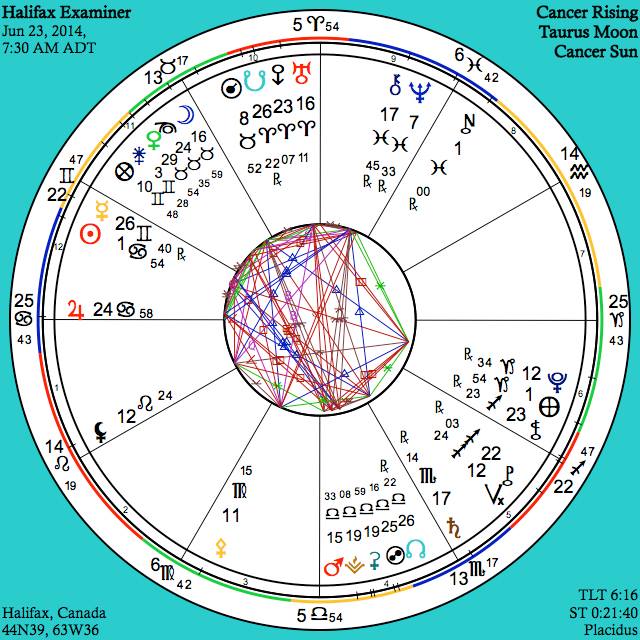 I have no idea what it means.

I’m not a fan of excessive navel-gazing or self-promotion, but I think the first anniversary of this enterprise warrants a bit of both, so here goes.

First of all, the thanks. Thanks to all who have supported the Halifax Examiner through their subscriptions, their patronage, their advice, and their criticism (seriously, I’ve learned a lot through criticism). Thanks to my friends and family for their moral support, their encouragement, and their forbearance. Thanks to readers for simply reading; this project is pointless if no one is reading it. I thought about mentioning specific people here, but the list would go into the thousands; I’m overwhelmed and humbled by that support.

I’m particularly proud of a few things over the last year — my reporting on the local business scene and Nova Scotia Business Inc., Moira Donovan’s coverage of campus issues, and El Jones’ weekly Saturday commentary. I’m somewhat surprised that I’ve devoted so much attention to media criticism, and I’m surprised that the reaction has been mostly favourable — I think I’ve done worthy work on the multiple conflicts of interest at the Chronicle Herald, and earlier this month the Toronto Star picked up my piece on Evan Solomon.

On the minus side, I think that especially in the last couple of months, my coverage of City Hall has slid. I’m not sure if this is because not so many important issues have come forward recently or because I’m losing interest, or both. The first of council’s two summer breaks starts tomorrow, so I’ll have time to reevaluate and consider how to better approach that coverage.

As for the immediate future, I’ve been working on a special project that I hope to begin rolling out later this summer. It is, by far, the most ambitious journalistic project I’ve attempted in my career. It has already consumed hundreds of hours of my time, and will require hundreds more. It’s challenging me in new ways, and I’m learning new-to-me journalistic techniques. I wouldn’t have had the opportunity to embark on such a large project were I working anywhere else.

One year in, my biggest problem is I’m stretched far too thin. I’m basically behind on everything. What falls most behind is my administrative tasks— bookkeeping, keeping up with subscriptions, answering my email, etc. Every day I play a game of triage, putting out the biggest and most immediate fires, and ignoring everything else. This can’t continue.

My hope is that I can soon hire an administrative person — someone to stay on top of the administrative side of things, manage freelancers, edit me, like that.

Hiring an administrative person will of course require money.

I’m the softest sell in the world. I’ve tried as much as possible to avoid asking for subscriptions, for money, etc. I figure people know what this is about, and I leave it at that. Honestly, I don’t monitor the subscription rolls. People will subscribe or not, for their own reasons, and I’m cool with that; I don’t want the subscription issue to interfere with my personal relationships, or my relationship with readers, so I really try not to know if any particular person is a subscriber or not. I mostly avoid discussion of the issue.

Today, however, I’ll make an exception. I’d like to bring in enough subscription and support money the next couple of months to hire that administrative person, bring back on an education reporter when classes start in the fall, and beef up my freelance budget. In short, I’d like to take the Examiner to the next level.

OK, enough of that. Navel-gazing and money issues taken care of, what I most want to do is celebrate the one year anniversary. Please join me tomorrow, Wednesday, between 5 and 10pm at the Company House, 2202 Gottingen Street. Jill Chambers and her band the Hold’er Newts will play a couple of sets, Natalie Chavarie and Virgil Muir will bring some Food Wolf snacks, and I’ll have Halifax Examiner swag for sale. (You can also buy a subscription if you want, but no hard sell, promise!) There will also be the CoHo bar, of course. But mostly I’d like to just enjoy some time with friends old and new.

I hope to see you there.