1. On the map: Sea Owl runs aground on Troop Island

Last week, I made a bunch of impertinent remarks about the Sea Owl, “that ridiculous yacht that’s been tied up at Salter Block for the last week.”

The 246-foot insult to good taste, with 30 people on board, finally left Halifax on Tuesday, June 29, but barely cleared the harbour before it “went aground in St. Margarets Bay near the north side of Troop Island,” confirms Lieutenant-Commander Bruno Tremblay of the Canadian Coast Guard via email. The Joint Rescue Coordination Centre and the Marine Communications and Traffic Services “monitored the situation,” said Tremblay, but offered no assistance. The captain of the Sea Owl waited for high tide to refloat the boat, and then it left for points south. 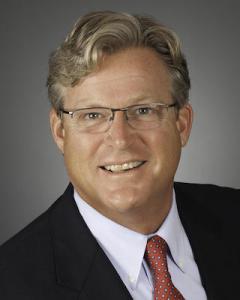 The Examiner reader who tipped me off about the incident also told me that the commander of the Sea Owl when it went aground was none other than Edward Kennedy, the son of Teddy Kennedy and nephew of former president John F. Kennedy. The reader was right about every other aspect of the grounding, so I don’t doubt he’s right about this as well, but Tremblay did not respond to my followup email. I’ve sent Kennedy’s office a query as well, with no response as yet.

“I understand that a Coast Guard cutter and an airplane from Greenwood were sent out in response to distress calls related to this,” says my informant. “No charge to Mr. Kennedy. Never mind the danger to the Coast Guard crew. It was a dark and stormy night.”

Troop Island, incidentally, is owned by the Nature Trust:

As those who have visited the island well know, Troop is a truly incredible and ecologically unique place. Wandering inland from the charming sand beach, you enter a new and unexpected world. Lush mossy ground gives way to a cathedral of towering centuries old beech, maple and spruce trees. The island is one of only a few remaining in the entire province providing refuge for Acadian hardwood forest. It also harbours an ecologically rich saltmarsh and pond, rocky intertidal habitats rich in marine life, and coastal forests. Unlike so many of our coastal islands, nature has been left unimpeded on Troop Island, offering a unique outdoor classroom and opportunity to understand and to study coastal dynamics and climate change. It is a place well-known and treasured by the local community, and by boaters, visitors and local ecotourism businesses.

As my informant notes, “the Nature Trust would not take lightly to a yacht full of fuel and oil etc. running aground on the island’s environmentally sensitive shoreline.” 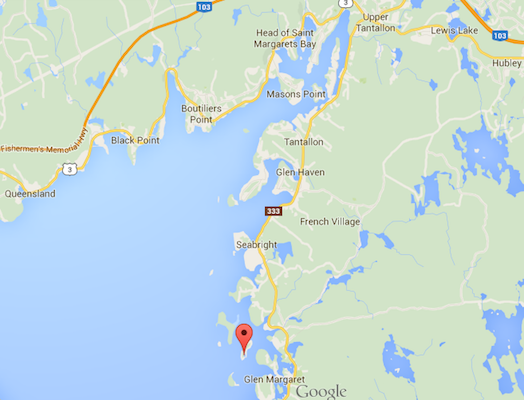 Troop Island is indicated on this Google map. 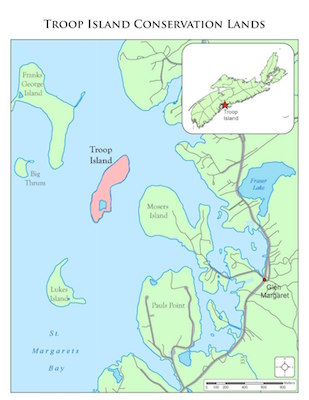 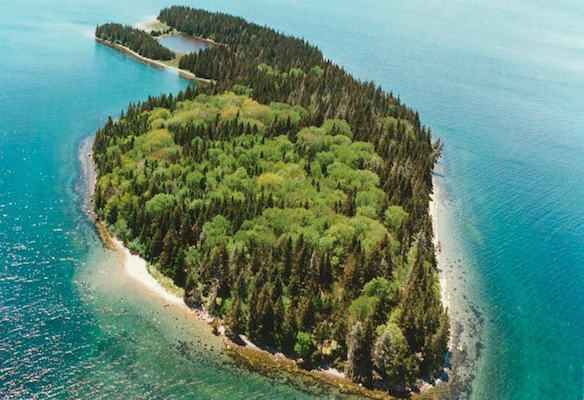 2. Not on the map: Nova Scotia Business Inc.

Aly Thomson, with the Canadian Press, obtained a report commissioned by Nova Scotia Business Inc that looked at awareness of the Nova Scotia business climate outside of the province. The results:

It says many business people found that their interactions with global business partners almost always necessitated an explanation of where Nova Scotia is and why they were doing business in the province.

Quoting an interviewee, the report says: “I think the overwhelming phrase is ‘Where is it?’ and ‘What are they doing up there other than fishing?’”

Huh. I thought ringing the bell for the opening of the trading day at the New York Stock Exchange put Nova Scotia business on the map?

3. On the map: Digby Neck earthquake 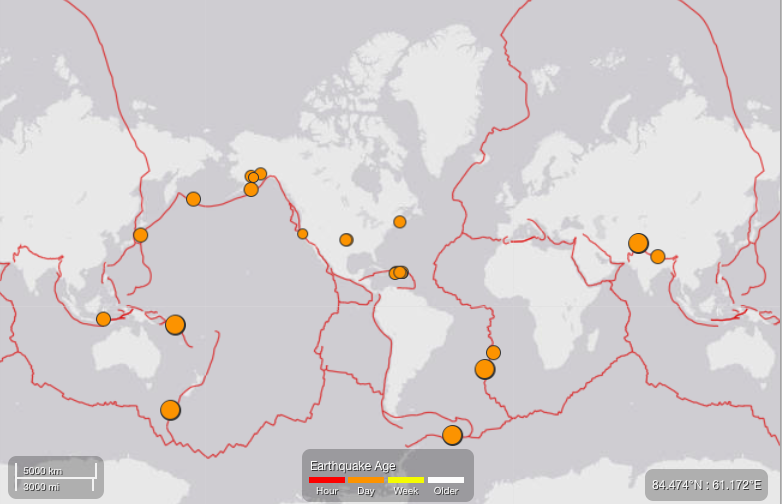 A tiny 3.4 earthquake off Digby Neck did something the province’s economic development professionals have been unable to do: put Nova Scotia on the map. Specifically, on this USGS earthquake map.

A magnitude 3.6 temblor hit near Digby Neck early yesterday morning. Earthquakes are rare in Nova Scotia, and so people are talking about it, with many people living nearby thinking it was a passing jet or thunder.

Sure, why not? But let this California boy explain earthquake measuring. Quakes are now measured on the Moment Magnitude Scale, which mostly replaced the old Richter scale in the 1970s. Either scale has a problem measuring very weak earthquakes, which are those under about 3.5 in magnitude. (The United States Geological Service is calling yesterday’s quake a 3.4. under the Richter scale.)

I rate earthquakes something like this: a 4.0 is like a truck driving down the street in front of your house. A 5. 0 is blasting happening at the lot across the street (remember sitting in the Shoe Shop when they were blasting for the convention centre? That was a short-duration 5.0.) A 6.0 quake will make you pay attention in a major way. A 7.0 quake will cause you to panic. An 8.0 quake will likely kill you.

Almost all quakes under 4.0 are harmless in terms of immediate danger to humans. (There’s a legitimate question about small fracking-induced quakes affecting aquifers and polluting home wells.) Quakes in the 5.0–6.0 range usually don’t cause any immediate damage, but under special circumstances — no building codes, bad construction, very shallow quakes under loose soil — there have been instances of large loss of life, usually in far-away places like Iran. A 7.0 quake is dangerous stuff, even in cities in North America with strict building codes. People generally die, but in recent history anyway, the damage has been contained. Anything above 7.5 is usually a major disaster. The 2011 earthquake that struck off Japan and caused the killer tsunami was a 9.0 quake, which is unimaginably powerful. That quake was over 100,000 times more powerful than the slight disturbance that hit Digby yesterday.

4. Not on the map: Hollis Street bike lane

“We’ll need to go back and look at the project’s scope.”

5. Back on the map: Stanfest

I’m continually impressed by the eternal optimism of the folks who schedule outdoor events in Nova Scotia.

The betrothed planning beach weddings with no alternate rain location take top honours, but second on the list are the organizers of Stanfest, the annual music festival in tribute to Stan Rogers held in Canso, a wind-swept rocky outcrop jutting into the hurricane and nor’wester alley of the North Atlantic. Last year, Stanfest had to be cancelled due to Hurricane Arthur, which must have been an enormous disappointment, but also a financial disaster to the organizers.

Thankfully for them, ACOA has stepped in with a grant of $159,170 to help with marketing the festival. I endorse this expenditure, if for no other reason than to acknowledge the Give’r spirit. Also, surprisingly, it looks to be a sunny and warm weekend, even in Canso.

6. Not on the map: Fireworks

Each year, the city schedules 10 different fireworks displays, as follows:

Given our weather, that means that maybe three of them will actually go off as scheduled when it’s not raining or snowing. Sure enough, due to the rain, yesterday’s scheduled Bedford and Halifax fireworks were postponed to tomorrow night. We can celebrate the US Virgin Islands’ Emancipation Day, or the beginning of the Dog Days of Summer.

All the local commentariat took the day off yesterday.

Environment and Sustainability Standing Committee (1pm, City Hall)—staff appear to be going slow, quite slow, on the committee’s direction to review water quality issues in HRM. 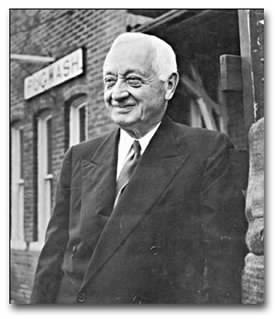 On this date in 1960, Pugwash native Cyrus Eaton was awarded the Lenin Peace Prize. Eaton was the founder of the Pugwash conferences, which wants to create “a world free of nuclear weapons and other weapons of mass destruction.” 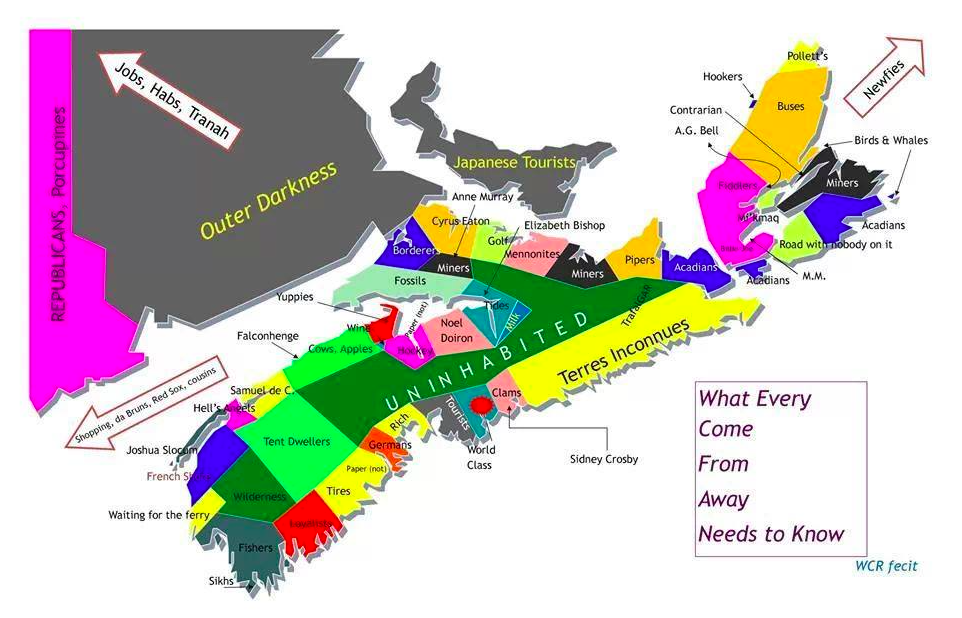 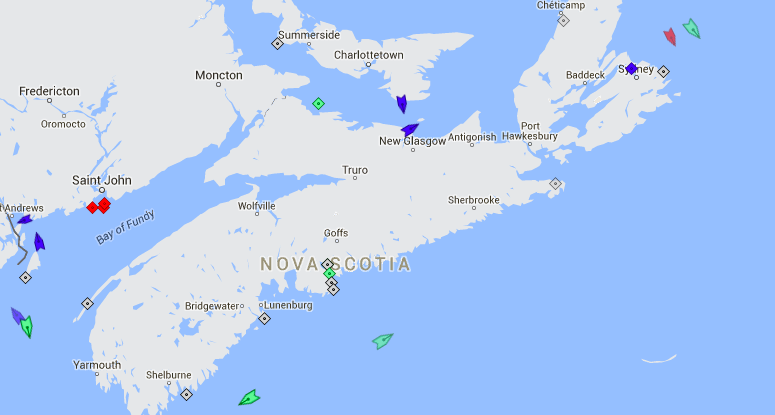 CSL Tacoma, National Gypsum to Burlington, Vermont (don’t ask me how that happens)

True story: I got up at 5am and wrote this Morning File in a rain-soaked campground.