You are here: Home / Featured / The elderly women who paved the way

“We don’t have to worry, it only affects the elderly.”

November, 2010, outside the Westin hotel. We are protesting the Halifax International Security Forum. Betty Peterson, then 93 years old, delivers a blistering speech against Edward Cornwallis, against white supremacy, against militarism. She makes me long for my 90s, where I imagine denouncing the enemies to our peace with a similar fervour. 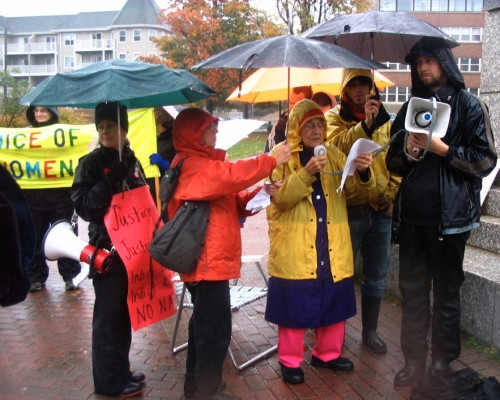 2018. The launch of the Viola Desmond $10 bill. Wanda Robson, then 91 years old, comes dancing up the aisle with her walker, waving her arms in jubilation. How I hope to one day embody her joy.

Every day, Lynn Jones. My favourite elder. When the NDP called her to offer an apology for snubbing her historic candidacy almost 30 years ago, her immediate and only thought was for community, and how to turn the occasion to communal benefit. To have done so much, and to turn all recognition towards others. We could all live to be so selfless.

In today’s search for younger and newer activists, it is easy to lose hold of the legacies of our elder women, the women who only became more radical and outspoken as they aged.

The state has no interest in teaching us the history of our movements or in teaching us to organize against power; amnesia benefits the status quo. Erasing the work of older, radical women and teaching us that they have nothing new to contribute forces us in every generation to go over ground we have already sown.

Our elders are not disposable, nor are they redundant. It is the grassroots grandmothers, the frontlines, the church worker, the banner sewer, the coffee maker, the overlooked organizer, they are our greatest strength.

My mother possesses a generous ability to make fast friends with women from random encounters that bewilders me. I am friendly, of course, but I reserve true intimacy for the tried and tested. My mother, immigrant to this country with three young children, jumped into building a social network with other women with a courage that, looking back now, I admire. Unable to work, tasked with the main responsibility for finding housing and schools and shepherding us through a new country and culture, she took the opportunity of the smallest meeting to draw women around her.

We successfully nagged our mother into getting us a puppy. The woman who advertised the dogs in the paper was a retired pathologist, one of the first women to hold that position. Mental health, not understood and not properly treated, ended her career. My mother had this story within minutes of meeting her, and they remained lifelong friends.

The godmother of the daughter of one of my father’s colleagues, met in our first days in Canada. My strongest memory of her, one that recurs every Christmas, is of her singing O Holy Night in full-throated operatic style. Being the obnoxious children we were, my siblings and I were slain with laughter. We collapsed into the cushions, howling, while my mother slapped our legs trying to get us to shut up. To this day, that carol makes me snort with laughter.

My piano teacher was another relationship of my mother’s that began as some kind of transaction and ended up in fast friendship. As a dedicated non-practicer of scales, I disliked piano lessons, and the only thing at the time I particularly liked about my teacher was that she made the thickest, fluffiest cake icing. I have never since tasted any icing like it, nor ever seen its texture. She also would french braid my hair into beautiful styles for gymnastics competitions, as my mother both insisted on waist length hair, yet did not know how to style it. The other thing I liked about her was, when exams approached, and I inevitably had to attend extra lessons to cram in all the studies and scales I hadn’t practiced, she would make me peanut butter and brown sugar sandwiches. Clearly, I am swayed by sweets.

Writing this now, I can see the obvious, that this woman baked cakes for me and fixed my hair and went out of her way beyond lessons, and yet, with the entitlement of childhood, I had little appreciation of her kindness or care.

She also possessed the quixotic creativity of the stifled genius. Were she born a couple of decades later, she would likely have run a theatre, or at least a costume department. Those kinds of opportunities not being available to her after (unhappy) marriage and (beloved) children, she poured her inventiveness into grandiosely conceived recitals.

She was, for example, far ahead of the mermaid craze. For the June recital one year, she conceived the idea of a mermaid choir. With her knack for bullying the reluctant into unwilling participation, my father was drafted in participation. My mother, unable to sing other than with enthusiastic volume for hymns, was spared. Having scored herself a choir, she sewed a dozen shimmery mermaid tails, with the idea that the women would sit on the stage as on rocks and sing to the men on the shore. The task of making the costumes took longer than anticipated, and so the tails were only finished the night of the concert.

It was at the point of the women having put them on that it dawned on everyone that there was no way to walk onto the stage with everyone’s lower extremities encased in elaborate, but inflexible, tails. The solution was for the women to hold onto the arms of the men, and hop through the doors, up the stairs, and onto the stage. My mother and I cried with laughter in the audience, leaning on each other weakly. My father was both mortified and irritated.

Another year, I was among the targets of her creative schemes. This time, it was a Mozart themed concert, complete with full Baroque-era costuming and wigs, all constructed by her. I was forced to be Mozart, while my sister accompanied me as Nannerl. Very important to this production was that we were forced to elaborately bow and curtesy in authentic 18th Century style.

You might think that because I perform poetry in public now that I would be into this kind of production. I very much was not. I mean, there was a wig. I don’t even wear Halloween costumes. In fact, it occurs to me that maybe the reason I don’t wear Halloween costumes is some kind of residual mental scarring from these childhood events.

At Christmas, to accompany the friendly beast carol, she sewed several animal costumes. This time my mother was enlisted to be the cow. She attempted to make my brother be a sheep or donkey, but he, practiced in aggressive refusal, ripped the costume off and stormed away.

As an adult woman, I am belatedly filled with admiration for her vision, her imagination, her unrelenting ability to bring her ideas into fruition. She surely knew how many of the participants rolled their eyes, yet year after year she persisted. The mundane was never for her. Why have students simply play the piano, when they could do it in full costume, and why not also accompanied by period-accurate dancers culled from the church congregation? She was not a wealthy woman, making her living giving ungrateful children lessons, yet she would rent out halls, buy yards of material and sew costumes to be used once, sometimes for only minutes long pieces.

What could this woman have been had she been born later, into more feminist times, where she wasn’t expected to marry and to give up her career? Working with the resources she had, she built her own theatrical world, her own troupe, paying tribute to the composers and music she loved with her whole heart.

Where would we be without these elders, these women who, often unrecognized, have made the ground for us?

Let us never forget them, and let us always fight to protect them, and their legacies against a world which tells us they do not matter as much as others.