Thirty-one people signed up to speak to the Law Amendments committee about Bill 148, which will legislate an effective wage reduction for public employees. Testimony was given last night and resumed this morning at 8am. 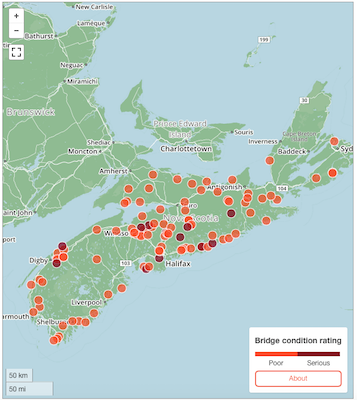 Michael Tutton of the Canadian Press is to be congratulated for his series on Nova Scotia bridges. His reporting is old school nuts-and-bolts data-driven journalism, which reveals a serious lack of maintenance for existing public works projects:

Senior bridge engineer Will Crocker said during an interview about half of the bridges in the province are past their expected 50-year lifespan, forcing continuing repairs to keep them safe.

Chief highway engineer Bruce Fitzner estimates the province’s roads and bridges need an average of about $400 million a year over the next decade to arrest the “infrastructure deficit,” — but that much money isn’t available.

“Our current budget for this year is $220 million for everything (roads and bridges). Theoretically every year you don’t spend that $400 million your (infrastructure) deficit increases. That’s the challenge,” he said.

You could spend hours diving into CP’s interactive map (that’s a screenshot of it above). The map gives engineers’ reports of specific worrisome bridges. For example, here’s the report on the bridge at the intersection of Highways 102 and 103 in Armdale: 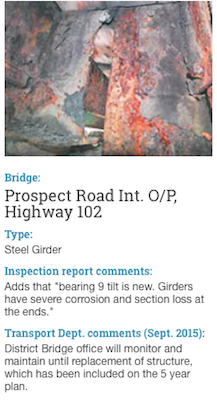 At approximately 1:19 p.m., officers responded to a pedestrian/vehicle collision at the intersection of Spring Garden Road and Queen Street. The 49-year-old male pedestrian was transported to hospital with non-life-threatening injuries. 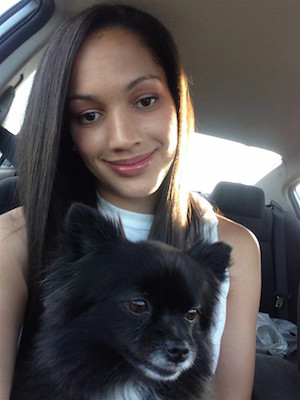 CBC and the Canadian Press have followed up on the dog attack that was mentioned in yesterday’s police reports. CBC:

The dog that was killed was a four-year-old black and white Pomeranian named Diamond.

Diamond’s owner, Rachelle Coward, said door to her ground-level apartment was open to let her two dogs out as she got ready for work. Coward`s partner was on the porch watching when a dog chased Diamond back into the apartment.

“The next thing you know I’m on top of a pit bull trying to wrestle just to get the jaws off Diamond’s neck,” Coward said.

The Canadian press continues the narrative:

Coward said she, her partner and mother wrestled with the large, grey and white dog, believed by officials to be an American Staffordshire terrier.

It appears Diamond died during the struggle and the other dog ran off with her body still locked in its teeth, Coward said.

The 25-year-old university student said the terrier dropped Diamond’s body in a nearby driveway when her mother swung at it with a ladle.

“It was trying to attack me,” Coward said, recalling the moment she picked up her dog’s remains.

Coward, incidentally, is a basketball star. As the Chronicle Herald reported in 2013:

The 23-year-old Coward, who represented Canada at the World University Games in Russia earlier this month, was a standout guard at Charleston Southern University in North Charleston, S.C., starting all 34 games she played for the Lady Bucs.

She ranks No. 1 in career scoring average for Charleston Southern at 18.2 points per game and 10th in career three-pointers, despite playing just more than one full season there.

Coward moved to the U.S. after playing her Grade 10 season at Auburn Drive High in Cole Harbour.

She made her NCAA debut with the University of North Carolina at Charlotte, winning the conference title and playing in the NCAA women’s tournament in her first year. But she transferred after her sophomore year and had to sit out the 2010-11 season under NCAA transfer rules.

She broke her left wrist in a fall during the Lady Bucs’ second game of the 2012-13 campaign and missed the remainder of the year.

She graduated from Charleston Southern this year with a degree in criminal justice and will study in the masters of criminology program at Saint Mary’s.

During yesterday’s weather event, a man was killed and two people badly injured in a head-on collision on Highway 101 in Coldbrook. This is one of the many undivided two-lane sections of the 100 series highways.

Twinning the highways will prevent the worst of these collisions, but costs a lot of money. There’s a lot that can be done short of twinning however, including:

We seem to have an all-or-nothing attitude in Nova Scotia: we either twin the highways or do nothing at all. There are halfway steps that can save a lot of lives.

If NSBI’s claims can be believed for Minacs, their “50 new big data jobs” generating “$6.48 million in salaries” would indicate their employees would be earning an average of $129,600 each over a five year agreement or approximately $25,920 annually per employee.

As for Track Group, they’re aiming for 60 new jobs at $13.65 million in salaries over five years which would see its employees earning an average of $45,500 annually over five years.

As for Track Group Analytics being a “tech and data analytics company” it appears a big part of their business is in security, servicing and monitoring ankle bracelets for prisoners in real time monitoring.

For a full account check out the company on ratemyemployer.com. It’s nothing less than shocking.

I, for one, take these types of websites with a grain of salt but I was hard pressed to find anything positive from a multitude of comments there – in fact, most people emphatically warn fellow workers to avoid Minacs at all costs. For example:

– “All call centers should have a union. I never believed in them before but when the only answer you get from management is ‘If you don’t like it, there’s the door’, you know something is wrong.”

– “If you’re looking into joining the company, please don’t. I’ve never had a job that has made me so miserable.”

– “I extremely regret leaving my previous company. So guys, please do not go for this company unless you want to lose your dignity, happiness and work-life balance. To others who are in the same boat as me, let’s get the hell out of here as soon as possible.”

There’s more, much more, but you get the picture.

Transportation Minister Geoff MacLellan must not walk often if he thinks it is safer to text while driving or to drive through a red light (those fines are three and four times lower, respectively, than walking across a street on a flashing light). Why else would he jack up fines on jaywalkers to $700?

He and the whole Liberal party need to give their heads a shake.

Audit & Finance (10am, City Hall) — the committee will approve the purchase of 8.27 acres on Innovation Drive in West Bedford where a transit terminal and park & ride facility will be built. 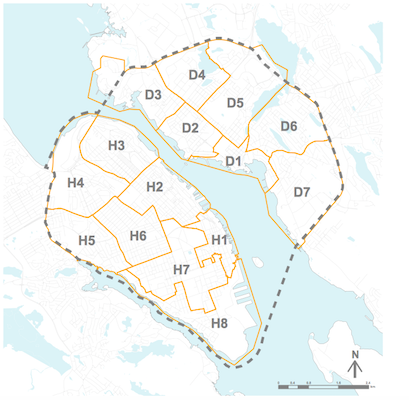 Community Design Advisory Committee (11:30am, City Hall) — the committee will look at proposed “sub-regional geographic districts” within the Capital District (the Halifax peninsula and everything within the Circumferential Highway in Dartmouth), as shown above. See the full report in this very large PDF.

Halifax Explosion 100th Anniversary Special Advisory Committee (3pm… the city’s event calendar says the meeting is at NSCC’s Leeds campus, but the agenda says the meeting is at the HEMDCC Meeting Space in Alderney Gate, so I dunno, roll the dice? Call someone?) — to give you an idea of what the committee discusses, the following correspondence is on the agenda:

Open House, Green Lantern rebuild (6pm, 1587 Barrington Street, The Chameleon) — I’m not aware of any opposition to this project; see the proposal here.

Open House, Brenton Street proposal (6:30pm, Central Library) — this is the proposed 16-storey building at the corner of Brenton Street and Brenton Place. There’s all sorts of opposition to it. See the proposal here.

Residents in Schmidtville sent out a press release relating their concerns about the loss of historic structures on Brenton Street, as follows:

The proposed boundaries of the Schmidtville Heritage Conservation District (see http://shapeyourcityhalifax.ca/schmidtville/photos/1684) include a block on the west side of Brenton Street north of Brenton Place. Presently there are six historic Schmidtville homes on that strip of land.

However, developers are proposing to raze most of these homes (and two historic properties on South Park St.) to build two apartment-condominium complexes.  The WM Fares Group wants to build a 16-storey tower at the corner of Brenton Place and Brenton Street. Geoff Keddy Architect and Associates has submitted a proposal for a different project running from South Park St. right through to Brenton St, which abuts the Fares proposal.

William Breckenridge of Friends of Schmidtville says “we want to educate on the history of Schmidtville and build a better future.” Adds Breckenridge, “We hope to bring all the community together to develop a strong neighbourhood, but first we must understand and respect the past.” Residents of the Trillium, Charter House and Greystone buildings have already expressed their dismay at these developments.

The block has a long history. The first owner of the land that now makes up Brenton Street and Brenton Place was Nova Scotia’s first Chief Justice the Honourable Jonathan Belcher in the 1770s.

The names of Brenton Street and Brenton Place derive from a former owner of the land Judge Sir Brenton Halliburton. Judge Halliburton owned the land for thirty-five years and was one of the most prominent officials of his day. Both roads became part of greater Schmidtville in 1847 when Alderman William G Anderson, Esquire acquired and subdivided the land from Sir Halliburton.

Today the seven properties on the northwest side of Brenton Place represent the last contiguous buildings left of the North part of Schmidtville. Insurance maps from 1866 and 1878 show that these buildings were built between these years. Proceeding up west side of Brenton St. are the addresses 1456, 1460, 1468 and 1474. These buildings represent the high form of Victorian architecture of Late Victorian, Queen Anne Revival, and Second Empire. All four were built between 1880 and 1895 and stand on the former Mitchell Estate, which ended at 1456 Brenton Street. The Mitchell family were successful merchants and owned many properties. According to The Hopkins Atlas of 1878 Mrs. Mitchell also owned a large stone house located now in the center of Park Victoria Apartments. Another prominent name who owned 1468 and 1474 Brenton St. was Barrister of law, Lewis Des Barres who came from a notable Halifax law family.

What these properties illustrate for Schmidtville is what remains of the Victorian structure of Upper class homes facing the peripheral main streets of Schmidtville. The north Brenton Street area thus provides a key historic link to the past and to leaders not only of Halifax but of Nova Scotia.

The Oval — due to the rain, the opening has been set back a bit. Updates here.

On December 16, 1991, Bernard Bradley performed Canada’s first transplant of fetal tissue to battle effects of Parkinson’s disease at the Victoria General Hospital. This really got the fetus-obsessed people worked up. 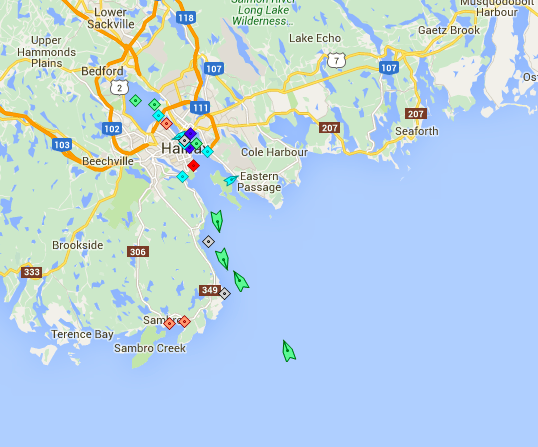 The Pilotage Authority stopped operations at 2am morning due to bad weather, but things appear to have cleared up, leading to the busy ship traffic at the harbour entrance this morning.