You are here: Home / Featured / The Dog Days of Summer 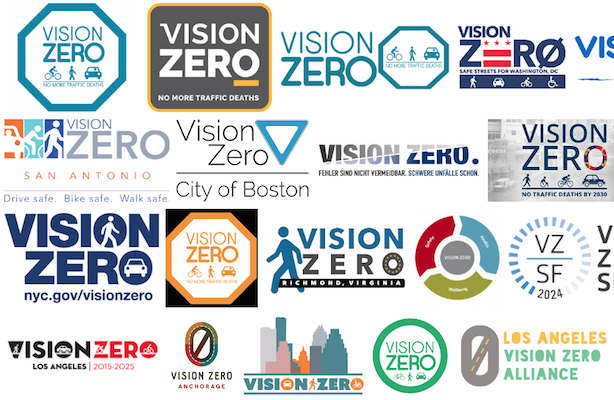 Just a partial collection of Vision Zero’s representation on Google Images. Vision Zero is being adopted by a growing number of North American cities and towns, but not Halifax.

“There are on average 1,400 personal injuries and 14 fatalities per year due to vehicle collisions in HRM, according to the new Strategic Road Safety Plan (SRSP), recently approved by city council’s transportation committee and now on its way to full council for debate and approval,” reports Erica Butler:

If all goes according to the new SRSP, by 2023 only 11 people will get killed and 1,120 injured. At least that’s the five-year goal of the plan approved by council’s transportation committee last week, a 20 per cent reduction. (The original goal as presented by senior transportation staff was 15 per cent, allowing for one more death and 70 more injuries on average per year, by 2023.)

Click here to read “Vision Nothing Much: Halifax’s new road safety plan ignores the experts and embraces more of the same.”

Last week, the Nova Scotia Human Rights Commission announced that it will hold an inquiry tomorrow, July 5, into a complaint that alleges “discrimination on the part of the Department of Environment for not enforcing what they view is a law requiring restaurant owners to have accessible washroom facilities if they have an outdoor patio for the summer.” 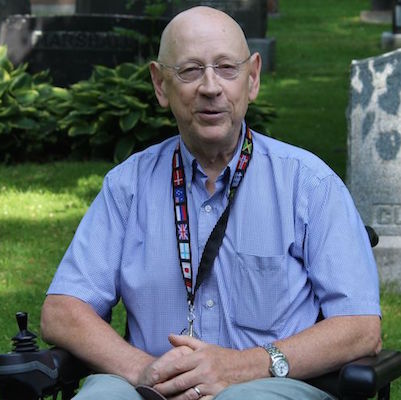 Some establishments, he said, have their washrooms up or down a set of stairs in a building that doesn’t have an elevator, while others may have doors that are difficult to open or stalls that aren’t wide enough.

Reed says Nova Scotia’s accessibility standards are ambiguous as to where exactly they apply: outdoor patios in Halifax, for instance, need to comply with the Canadian Standards Association’s accessible design standard.

“But what’s the point of having an accessible patio if you don’t have accessible washrooms?” he said.

The hearing starts Thursday, 9:30am, at the Best Western Chocolate Lake.

I don’t know if this has been reported before (if it has, I can’t find it on either the CRA or Nova Scotian government websites), but the province last week published the details of responses to questions about immigration that it commissioned in the Atlantic Quarterly omnibus public opinion survey conducted last November and December.

The survey showed general support in Nova Scotia for increased immigration, with 65 per cent of respondents agreeing with the statement that “Immigrants serve to increase the number of jobs in the province and thus tend to strengthen the economy overall” and 71 per cent completely or mostly agreeing with the statement that “The province should do more to attract immigrants to Nova Scotia.” And 83 per cent completely or mostly agreed that “Having immigrants come to the province makes it a more interesting place.”

However, there are interesting demographic differences in the responses. For instance, while 72.5 per cent of respondents in Halifax agreed that “Immigrants serve to increase the number of jobs in the province and thus tend to strengthen the economy overall,” that number drops to 58 per cent in Cape Breton. Also, 71 per cent of men across the province agreed with the statement, but just 60 per cent of women did. And by far the largest support for the statement  — 85.7 per cent — came from respondents making more than $100,000 annually; 63.8 per cent of those making between $50,000 and $100,000 agreed with it; while 58 per cent of those making less than $50,000 did.

You can drill into the numbers here.

Atlantic Lottery responded to my bit yesterday about Argyle Street:

We read your coverage this morning in the Halifax Examiner regarding Atlantic Lottery’s new retail and office space at the Nova Centre. We want to take this opportunity to clarify a few items for your readers.

Atlantic Lottery has always had a presence in Nova Scotia, and we are excited to be moving to the core of downtown. The new space will better meet the needs of not only our employees, but also our winners and our players with the establishment of a retail storefront. The space is not just an office — it will also have a retail/winners component.

An office and retail space in the downtown Halifax core will generate a significant amount of brand awareness for Atlantic Lottery in Atlantic Canada’s largest city. One-hundred per cent of Atlantic Lottery profits go back to Atlantic Canadian communities – in 2016-17, $137 million was returned to our Nova Scotia shareholder.

The office space is being planned to accommodate 10 to 15 employees, along with some ‘hotelling’ space for our other regional employees.

We are looking forward to meeting winners and hosting win celebrations in the heart of downtown Halifax. When we hold our first win celebration at the new space, if you’re interested, we would love to welcome you to attend with the media and take a look. 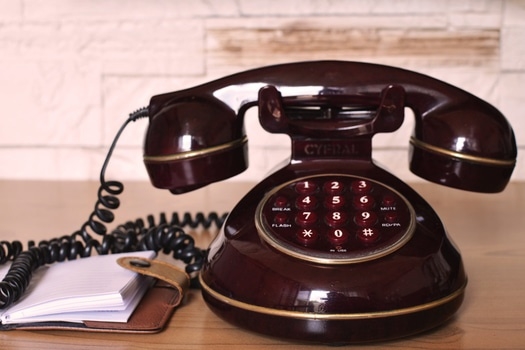 When I lived abroad, I was deeply grateful for almost everything about the BBC World Service except for World Have Your Say, an international Sunday night phone-in show that, no matter what the ostensible topic, always seemed to end with some gentleman from Uganda calling in to condemn homosexuality. I used to play a game to see how few notes of the opening theme I had to hear before I could get to the radio and turn it off.

Likewise, as much as I enjoy my CBC Radio One, I don’t like Cross Country Check-Up and I don’t like the Maritime version either (in fact, I like it so little I can’t remember what it’s called.)

The idea that the shows are like “the kitchen” or “the coffee shop,” where everyone in the country can get together and swap ideas about important subjects is precisely my problem with them — if I wanted to hear lots of uninformed discussion of important subjects, I could go to an actual kitchen or coffee shop. I listen to the radio for informed discussion. (I have the same problem with the endless panels on CBC television — one journalist and three partisan hacks discussing everything under the sun and because nobody commands in-depth knowledge of everything under the sun, the panelists instead discuss everything in terms of how it will affect the opinion polls.)

Summer is a tough time for subscriber-supporter news media (see below), so if you’re able, maybe throw a little scratch to Campbell by subscribing to the Spectator, or better yet, get a joint subscription to the Examiner and Spectator. 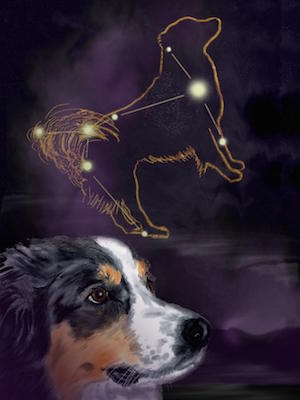 The Old Farmers Almanac says we entered the Dog Days of Summer yesterday, and they extend until August 11. The “dog” part of “dog days” refers to Sirius, which is called the “dog star” because it’s in the constellation Canis Major, or “major dog.” (Of course the constellation has no meaning besides the perception of its various component stars from Earth — the stars themselves are very far away from each other.)

According to Wikipedia (why would Wikipedia lie?):

In Greek Mythology, Canis Major represented the dog Laelaps, a gift from Zeus to Europa; or sometimes the hound of Procris, Diana’s nymph; or the one given by Aurora to Cephalus, so famed for its speed that Zeus elevated it to the sky. It was also considered to represent one of Orion’s hunting dogs, pursuing Lepus the Hare or helping Orion fight Taurus the Bull; and is referred to in this way by Aratos, Homer and Hesiod. The ancient Greeks refer only to one dog, but by Roman times, Canis Minor appears as Orion’s second dog.

Sirius is the brightest star in the sky, although this summer Mars is outshining all the other planets and stars, including Sirius. Sirius mostly stays in the southern sky, but becomes visible in Mediterranean latitudes in early summer, and the ancient Egyptians and then the Greeks and Romans after them blamed the heat of summer on the appearance of Sirius. And a lot of other stuff, too; during the Dog Days of Summer, “women are at their foulest but men are weak since they are parched in head and knees,” noted the Greek poet Alcaeus.

Foul women and weak men aside, this time of year in Halifax means everyone goes on vacation, government offices slow down or close completely, and no one pays attention to the news. Page views of the Examiner (and I assume every other local media) drop precipitously about now, only to return to normal numbers in late August.

Mary Campbell, my colleague in Cape Breton, slows publication of the Cape Breton Spectator down to every other week through the summer. I won’t go that far, but the general slow-newsness of the season will, I hope, allow me to use this space for musings and wanderings that may not be so Halifax- or Nova Scotia-specific, or that bring a longer view to things that are. I’ll probably write about myself too much.

Special Events Advisory Committee (Wednesday, 9am, City Hall) — Halifax is bidding on hosting the 2020 IIHF Women’s Worlds Championship, and so the committee is considering recommending that council give $250,000 to Hockey Nova Scotia, conditioned on the bid being successful and on the province matching the grant.

FCM 2018 Conference Advisory Committee (Wednesday, 1pm, City Hall) — the last meeting ever for the committee (assuming they get quorum); the committee will suggest that Quebec City, the host of next year’s conference, tear down a two-block section of its historic downtown and put a giant and ugly 16-storey glass building in its stead.

In December, the company had applied to rezone the property from Heavy Industrial (IHI) to C&D Materials Transfer (CD-1) in order to accommodate the new use. “At that time,” reads the staff report, “NWPAC recommended refusing the request based on concerns about protection of the watercourses, lot size and the lack of impermeable liner. The applicant is now requesting a less intense use with the CD-1 Zone in response to these concerns.”

Public Information Meeting (Wednesday, 7pm, Multi-purpose Room, Chocolate Lake Recreation Center) — Cornerstone Developments Limited wants a zoning change on seven properties between 651 and 701 St. Margarets Bay Road. The existing buildings are two (and in one case three) storeys, and contain four apartments each. Cornerstone wants to subdivide them further, such that each building will contain six apartments. That necessitates a zoning change from R-2 to R-3.

I wrote about this yesterday.

Formulating Success Math-Stats Networking and Pitch Event (Thursday, 5pm, Room 1011 and Atrium, Rowe Management Building) — tech start-ups will make us all rich. I’m spending all my tech start-up riches at the beer garden tonight, how about you?


5am: MOL Paradise, container ship, arrives at Fairview Cove from Norfolk
5:30am: Heritage Leader, car carrier, arrives at Autoport from Bremerhaven, Germany
8am: Adventure of the Seas, cruise ship with up to 4,058 passengers, arrives at Pier 21 from Saint John
11:30am: Hercules Highway, car carrier, sails from Autoport for sea
5:30pm: Adventure of the Seas, cruise ship, sails from Pier 21 for New York
9:30pm: MOL Paradise, container ship, sails from Fairview Cove for Dubai

Unlike some of my media colleagues, I wasn’t invited to the Fourth of July party at the American consulate. I guess actually holding American citizenship precludes me. I’ll listen to Fourth of July songs instead.