I’m doing something I’ve never done before: having a subscription drive.

Besides my own work, over the past two years, I’ve been able to publish Hilary Beaumont, Linda Pannozzo, El Jones, Erica Butler, Evelyn White, Jennifer Henderson, and others. I also had the great fortune to publish Michael Gorman before the CBC snatched him up, and now I’m working with Chris Lambie on a few things. That list isn’t exhaustive; there have been a couple of dozen other contributors through the years, and more are coming. Later this week, I’ll announce another important regular voice joining the Examiner crew.

Through these two years, I’ve been a soft sell on the subscription front. There’s a link at the end of every Morning File, but otherwise I rarely even ask for subscriptions. Now, however, I’d like to step it up a bit and expand the kind of offerings you’ve come to expect from the Examiner.

So please subscribe. You can do so by clicking here. You can buy a regular subscription for just $10 a month, but for the month of November, if you buy a $100 annual subscription, we’ll throw in a free Halifax Examiner T-shirt.

Now, back to your regularly scheduled Morning File.

Yesterday, Halifax Water submitted an application to the Utility and Review Board seeking to adjust its stormwater charges.

I haven’t had time to read the 332-page document, but the application’s Executive Summary claims that “Residential Customers are currently charged $33.39 annually. Under this proposal, the majority of residential customers (78,077 out of 87,968 or 88.8%) will see a decrease in their Site.”  Here’s a chart explaining the effect of the proposed changes: 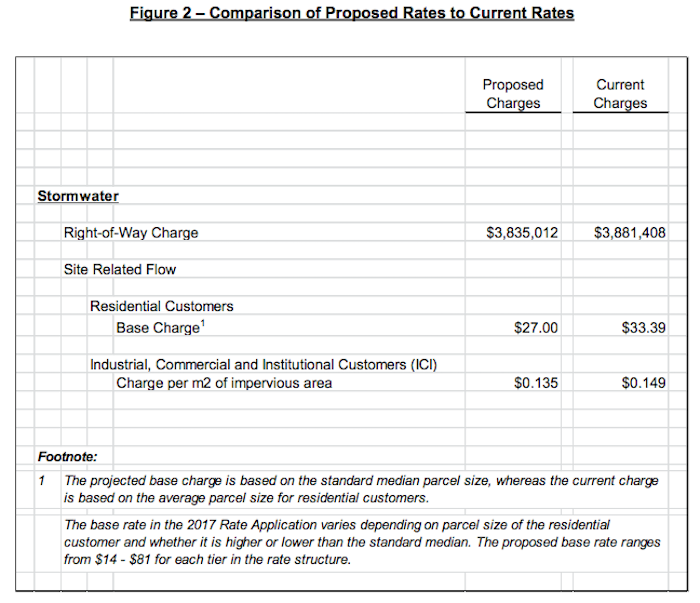 I doubt this will much reduce the ire of the people opposed to the “ditch tax.”

Readers can find the application by going here and typing M07731 into the top search box. 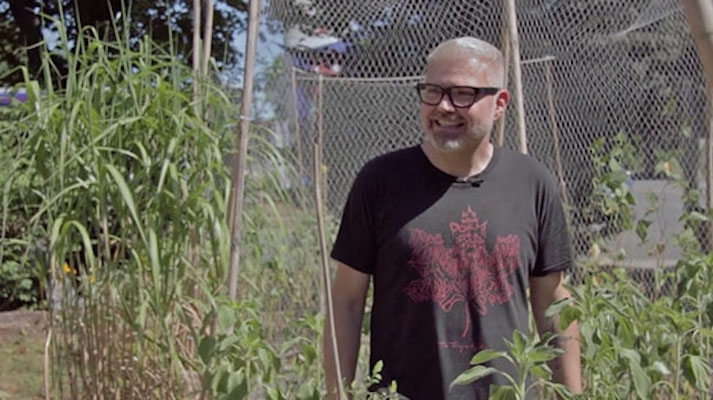 “After hours of counting on Monday, Shawn Cleary is officially the councillor-elect for District 9,” reports Zane Woodford for Metro:

The results of the Oct. 15 election were put to the test in a judicial recount in Nova Scotia Supreme Court. After about four hours of counting by Judge Josh Arnold, the new results showed an extra vote for Cleary, widening the gap of his win from 106 to 107 votes over the incumbent, now-former councillor Linda Mosher.

Mosher was unable to attend the recount, sending lawyer Barry Mason and campaign manager Mike Kydd to court on Monday on her behalf. But she provided a statement to reporters congratulating Cleary for his win, and then going on to question the legitimacy of the electoral process in Halifax.

She called on the new regional council to direct the auditor general to conduct a forensic audit of the elections office during the campaign, “with particular, but not exclusive, emphasis on the security provisions for online voting, training of elections staff and the employing of former Councillors as elections staff and whether that constitutes a real or perceived conflict of interest.”

When Sloane was on council, she and Mosher were often at loggerheads.

And yes, it’s very weird that Mike Kydd was Mosher’s campaign manager, but that’s neither here nor there.

Some will read simple petulance into Mosher’s comments, but I concur that the process needs a review. It’s unlikely that anything untoward happened in the e-voting, but the potential for wrongdoing or error is huge.

I ‘ve never met Cleary in person and don’t know much about him besides that he is a former Liberal Party staffer (correction: Cleary worked on Liberal MLA Joachim Stroink’s campaign, but was previously a researcher for the PCs). But it’s hard not to think he’ll be an improvement over Mosher at the council table.

I never really understood Mosher. She had a knack for speaking in such a way that she seemed to be on both sides of every issue, and I think that translated into electoral success. But she was disliked by other councillors, and her campaign contributions and voting record show she was a darling of the development industry.

I think that pro-development record came up against a strong community backlash over the proposal to extend water and sewer services down Purcells Cove Road, potentially opening up the backlands to development. In typical both-sides-of-her-mouth fashion, Mosher attempted to equivocate and confuse, but residents finally saw what she was about — or at least enough residents to defeat her at the polls.

At 8:30pm, HRP officers responded to a weapons/suspicious circumstance call in the Danforth Road area.  A 12 year old boy was going through his trick or treat bag after Halloween and he cut his thumb reaching for a candy bar. A razor blade was found inserted inside the wrapper of a candy bar. The boy had been trick or treating in the Danworth Road / Keyworth Lane area of Spryfield and had visited approximately 150 houses. The boy suffered only a minor cut and the matter is still under investigation.

The father, who has the Twitter handle @HfxPat, posted these photos: 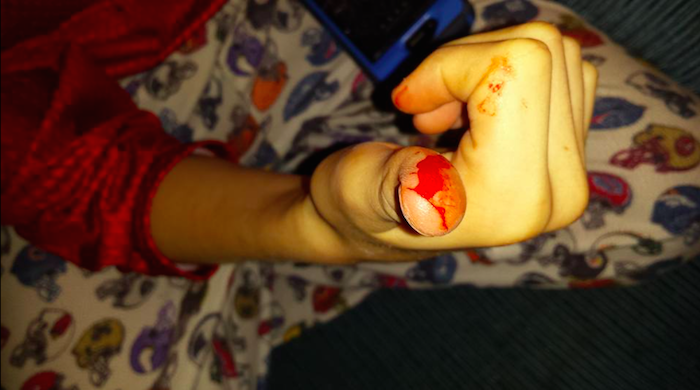 It’s worth noting that @hfxpat has only six followers (it was five last night) and follows just 17 accounts, so he likely has not seen yesterday’s CBC article debunking Halloween candy tampering or my repeated diatribes against what is clearly an urban legend abetted by hoaxers.

In any event, no other child in the neighbourhood has yet to report getting death candy last night.

But CTV carried the report on the 11pm news, so now we’ll get copycat reports of Halloween candy tampering from across the network’s viewing area.

My prediction: the cops will make a big deal out of this: Be sure to check the candy! Only accept candy from Megacorp, Inc. and never anything homemade from that possibly psychotic old lady down the street! Go only to approved Halloween events, preferably guarded by cops collecting overtime! BE AFRAID! And then we’ll be told about forensic investigations and high-tech surveillance and why we must support forever increasing police budgets and intrusions into our civil liberties.

I remind readers of this November 4, 1996 Chronicle Herald story by reporter Randy Jones (and is that a great reporter name or what?): 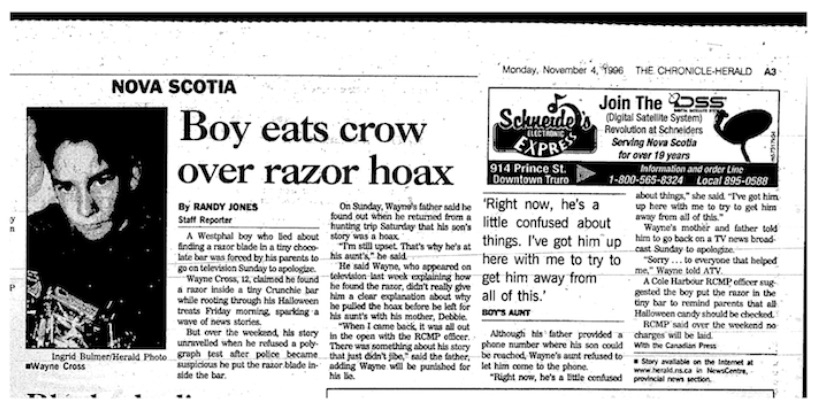 Ah, the good old days, when cops would tie kids up to lie-dectector machines and parents would force a boy to go on TV to apologize for his misdeeds. There are a few Wayne Crosses in the Halifax area; it’d be great to talk to the one in the article — I bet these 20 years later he’s now a stand-up guy, in part because his dad wouldn’t stand for that sort of nonsense from his son.

We’ve had something like a dozen “Halloween candy tampering” reports over the past few years, and no one has been charged — either for tampering with candy or for calling in a hoax.

When I call the cops about this, they put me off. The candy is being sent to a lab somewhere for testing. The results aren’t in. The investigation is ongoing. We’ll get back to you if we learn anything. It strikes me as a particularly nonchalant attitude about someone supposedly trying to kill random children; my guess is the cops know there are a bunch of lying kids out there, but don’t want to make a big deal out of it because the fear the reports generate in the community serves the cops’ larger agenda.

If I’m wrong and someone is charged with something that isn’t a hoax, I’ll personally apologize to @hfxpat, his son, the cops, and readers. I’ll wash @HfxPat’s car. I’ll attend 10 police commission meetings, even the boring ones.

But I’m not wrong.

“Testimony is expected to begin today in the jury trial of a man charged in the deaths of two young New Brunswick boys who were suffocated by a python,” reports the Canadian Press. This has got to be one of the most horrifying stories to ever come out of the Maritimes.

Leave First-Past-the-Post as it is – even though it’s evident that the current system needs no extra misguided misfits. In the name of sanity we ought to try to open our brains.

Innovation!!!1111eleventy111!!! (6pm, Room 2600, Killiam Library) — The Dalhousie Entrepreneurship Society is hosting an “entrepreneurship workshop” on “Prototyping your Innovative Creations.” Bring your own booze; the drinking word is “world-class.”