You are here: Home / Commentary / The Crown attorneys are singing a new tune now that the Neoliberal state is attacking them

“They will take away and smash and trample on our rights. And the question is whose rights are going to be trampled next.” 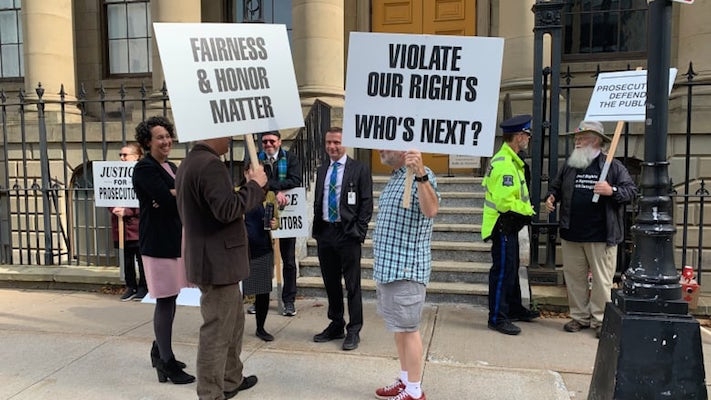 The Crown attorneys join a long history of protestors in this province fighting Neoliberalism and austerity politics. The Guardian describes Neoliberalism in this way:

Neoliberalism sees competition as the defining characteristic of human relations. It redefines citizens as consumers, whose democratic choices are best exercised by buying and selling, a process that rewards merit and punishes inefficiency. It maintains that “the market” delivers benefits that could never be achieved by planning.

Attempts to limit competition are treated as inimical to liberty. Tax and regulation should be minimised, public services should be privatised. The organisation of labour and collective bargaining by trade unions are portrayed as market distortions that impede the formation of a natural hierarchy of winners and losers. Inequality is recast as virtuous: a reward for utility and a generator of wealth, which trickles down to enrich everyone. Efforts to create a more equal society are both counterproductive and morally corrosive. The market ensures that everyone gets what they deserve.

Since the WTO protests in Seattle in 1999, anti-capitalist protestors have repeatedly fought against these policies. In turn, these protests have been met with increased state and police repression.

In 2007 in Halifax, for example, anti-free trade demonstrators were arrested protesting the Atlantica conference. Twenty one people were arrested in the protests. Four protesters were ultimately sentenced. The prosecuting attorney sought jail time for the four, arguing that the judge should set an example and discourage further protesting against the upcoming G8 meeting.

The prosecutor was Rick Woodburn.

In an account written at the time for the Halifax Media Co-op, Asaf Rashid, one of the protestors and now a human rights and prison lawyer, described Woodburn’s arguments:

The Crown, Eric Woodburn conducted his arguments for sentencing first. He began with me. He started by characterizing the protest as an example of anarchy and how society could not allow anarchy to erode democratic values. Peaceful protest was well and good according to Woodburn, but the anarchy and violence at the Atlantica protest was a threat to our very social fabric.

He also made reference to the fact that there was an upcoming G8 conference in Halifax, and an example needed to be set to ensure that everyone knew that anarchy and violence would not be allowed there. In my view, his arguments came across as a rant.

Additionally, since the beginning of this trial, Woodburn has harped on the fact that I gave a presentation about resistance to Atlantica and global resistance to neoliberalism a few days before the protest, and that this, in addition to the fact that I have been at many other protests, showed that I was clearly a leader figure at the protest. However, no evidence was ever entered about me having anything more than a participatory role.

Throughout Woodburn’s entire commentary, he cited no case law, and made no reference to any specific witness testimonies to back up his position. This limited preparation reflected his total overconfidence that the result he desired was a formality. For me, he wanted one month of jail time.

While Rashid escaped jail time, one of the protestors did end up receiving fifteen days imprisonment.

In declaring the Crowns “essential workers” and denying them the right to strike, the government has also, as Woodburn did, cited the issue of “public safety.” In maintaining an “illegal” strike, the Crowns join those who have been accused of endangering democratic values and threatening the social fabric by protesting.

In 2011, the Occupy movement began in Zuccotti Park in New York City, and rapidly spread to other cities including Halifax. Occupy protesters under the slogan “We are the 99%” drew attention to wealth and income inequality. Among other demands, protestors drew attention to the erosion of stable jobs under Neoliberal capitalism.

On November 11, 2011, after Halifax protestors agreed to move from Grand Parade to Victoria Park to accommodate the Remembrance Day ceremonies, the police raided the Occupy tents during a torrential downpour and arrested 14 people. Protestors complained about the brutality of the arrests, arguing that the police use of force went well beyond what would be normally used in handling a bylaw violation.

The prosecutor of the Occupy protestors was Rick Woodburn. After reviewing the evidence and seeing “no realistic prospect of conviction,” the charges were dismissed after “being dragged through the legal system for six months” in the words of one protestor.

Woodburn, however, defended the police actions:

Woodburn said after reviewing the evidence, he determined that the police conducted a “thorough and professional investigation, and had the reasonable and probable grounds to lay the charges in the first place.”

In December 2018, protestors were arrested outside the Canada Post building. The protest was in support of striking unionized postal workers who were legislated back to work. In that case the prosecutor was Adam McCulley. Charges were eventually dropped against three of the protestors in return for accepting a six-month peace bond. Labour leader Tony Tracy had this to say:

“We were there in support of the postal workers, CUPW members, who were ordered back to work unfairly — and we would argue unconstitutionally — who had their right to strike stripped (from) them and were not allowed to have a picket line themselves.”

The three continue to assert they are not guilty of the charges, he said.

“At this point, we’ve agreed to undertake a peace bond that the Crown has asked us to undertake, which requires for the next six months that we not attend to the postal sorting facility on Almon Street except for the purpose of sending or receiving mail. However, we assert that we are fully not guilty of these charges and we were certainly prepared to proceed on that basis had a reasonable offer of a peace bond not been offered to us.”

In any of these cases of protestors fighting policies against workers, crown prosecutors could have declined to pursue charges before the cases entered the court system. Prosecuting is a choice. Even when charges are eventually dropped, protestors face the stress and expense of going to court. Arresting and prosecuting protestors acts as a deterrent to anyone else challenging the state, making it clear that they can be expect to be met with force and threatened with imprisonment.

In the words of Aaron Doncaster, arrested in “Robin Hood” action by Halifax Coalition Against Poverty against a Conservative party  fundraiser:

With regards to pleas and the business of the courts (they make a lot of money to justify paper pushing jobs) you do not realize how many innocent people actually have their lives ruined because they take pleas even though they are not guilty. If you are not scared from the police treatment during and after arrest, the court system usually sucks what little life you have left and often pleas are had cus people just want it all to end.

Crown attorneys will argue that they are simply “doing their job” when they prosecute protestors. Critics of Neoliberalism, however, note the alarming creep of collusion between corporations, police, government, and the courts in pursuing injunctions against protestors, prosecuting charges in the name of public safety, and upholding the interests of the powerful.

At the end of his account of the prosecution of the Atlantica protests, Rashid had this to say:

The solidarity [shown to the protestors throughout the case] created examples of people helping each other out through social struggles. They are valuable stories, to be repeated in whatever forms each particular battle requires. I personally hope that the examples of solidarity shown through the particular battle that me and my friends have gone through can be expanded the next time someone has to face similar challenges, and the next time…

This call for solidarity in the face of government authoritarianism against workers has been met this week by labour activists, who have expressed public support and joined the provincial crowns on their picket line. Woodburn is correct in arguing that the erosion of rights of any group is a danger to the rights of all, and it is this principle that has brought protesters out time after time to fight anti-worker policies and ideologies.

If the McNeil government is willing to attack nurses, teachers and lawyers — people with social power and influence — there is little hope for people with much less power, resources, or ability to organize. Eroding the bargaining rights of Crown attorneys sends a message to all workers in this province, and we should all be concerned.

It is perhaps an irony, though, that after they are legislated back to work, Crowns will continue to prosecute anti-capitalist protestors, labour organizers, and land defenders.

Woodburn is wrong, however, in formulating his call for solidarity as though the trampling of rights begins with the Crowns. The question is not only “Whose rights will be trampled next?” but also “Whose rights were trampled before?”

It was the protestors a decade ago and more who were fighting these very policies and sounding the alarm about the erosion of the public sector, the attacks on workers’ rights, and austerity policies that cut funds from public services. Woodburn angrily demanded jail time for protestors to send a message and set an example for other protestors. And now he himself is an illegal protestor.

In this, he and other Crowns would perhaps do well to remember Martin Niemoller’s warning. I have made some adaptions:

First they came for the anarchists, and I prosecuted them.

Then they came for the Occupy protesters, and I prosecuted them.

Then they came for the union organizers, and I prosecuted them.

They they came for the land defenders, and I prosecuted them.

Then they came for me, and there was no one left to say anything.