You are here: Home / Featured / The cops who shot up the Onslow Fire Hall committed no crime, rules SIRT 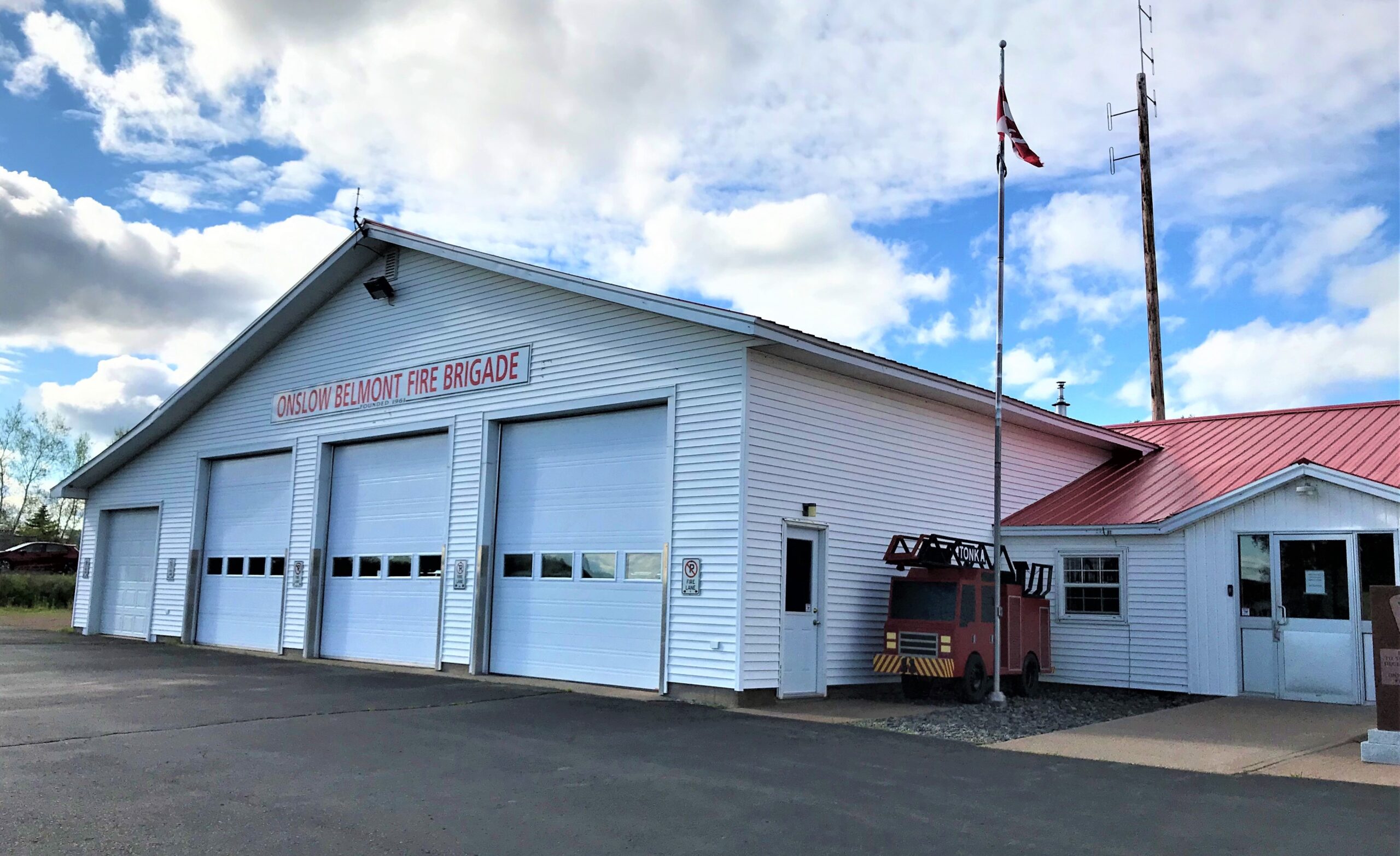 The two RCMP officers who shot up the Onslow Fire Hall on the Sunday morning of April 19, 2020 committed no crime, determined the Serious Incident Response Team (SIRT) in a ruling issued yesterday.

The shooting came in the midst of a substantial police response to the man on a 13-hour killing spree that left 22 people dead. The killing started Saturday night, April 18, in Portapique, where the killer, who the Halifax Examiner refers to as GW, murdered 13 people.

By early Sunday morning police knew that GW was driving a replica RCMP cruiser, was wearing an orange vest, and was heavily armed. The two RCMP officers who would later discharge their weapons at the fire hall were off-duty called into work at 3am. They are referred to in the SIRT report as Subject Officer One and Subject Officer Two (SO1 and SO2).

The officers drove together in an unmarked Nissan Altima police vehicle, SO2 driving, and went to a command post set up at the Great Village Fire Hall. The car had a mobile police radio, and SO2 had an additional portable radio with them.

The SIRT report confirms a sad fact that has been widely rumoured but not confirmed publicly by police: “They [SO1 and SO2] learned that several children had witnessed their parents being shot dead” in Portapique.

On Sunday morning, the killing resumed. In fast sequence that morning, SO1 and SO2 learned through police radio traffic that Lilian Hyslop had been killed on the side of the road in Wentworth, either shot or hit by a police cruiser. They also learned of a structure fire on Hunter Road, and that a police cruiser had driven away from the scene.

“Shortly thereafter” — the SIRT report frustratingly provides no exact times — a report came that the killer was at a home on Highway 4 in Glenholme. SO1 and SO2 drove to the home, but GW had already left.

The SIRT report is confusing about geography and times. It reads:

A short time after leaving that location [the home on Highway 4 in Glenholme] SO1 and SO2 heard further dispatches advising that two more persons had been shot dead in their vehicles on Plains Road in Debert. They knew at this point that the serial killer had murdered three more persons in the space of less than 30 minutes. SO1 and SO2 travelled from Wentworth to Debert. SO1 was familiar with the area where these killings occurred. They did not attend the scene of the latest shootings but rather began searching the area for the killer. Their search eventually led them to be travelling in the direction of Onslow.

By that narrative, it appears that SO1 and SO2 drove 25 kilometres north from Glenholme to Wentworth, then learned of the killings on Plains Road just a few kilometres from the Highway 4 house, and drove back south to the Debert/Glenholme area. There’s no explanation for why SO1 and SO2 would leave the immediate area and go to Wentworth, when the latest killing was very close to them in Glenholme.

Another possible explanation, which seems to cascade through RCMP narratives in the days after the killings, is that police continually confuse Glenholme and Wentworth, using them interchangeably, even though they are 25 kilometres and more apart. But if that’s the case, shouldn’t a careful SIRT review of the facts have clarified the geography?

As they were approaching the Onslow Fire Hall, they saw a marked RCMP vehicle parked in front of the fire hall facing the road and AP2, wearing a yellow and orange reflective vest, standing by the driver’s side door of a marked RCMP vehicle. AP2 was dressed in a fashion similar to other accounts of how the killer was dressed. They could not tell if the driver’s side door was open or if anyone was in the car because they were over 88 meters away and facing the passenger side of that vehicle.

SO1 yelled to AP2 “police” and “show your hands”. AP2 did not show his hands but rather ducked behind the marked police car then popped up and ran toward the fire hall entrance. The SOs fired their weapons. SO1 fired four shots and SO2 fired one shot. Neither AP2 who had run into the fire hall nor AP1 who, unbeknownst to the SOs, was sitting in the police vehicle were struck by the shots.

So, according to the SIRT report, a total of just five shots were fired by SO1 and SO2. This contradicts accounts given by people who spoke with the Examiner, who reported “dozens” of shots fired. A photo taken by Examiner reporter Jennifer Henderson shows what appear to be far more than five bullet holes in the side of the fire hall: 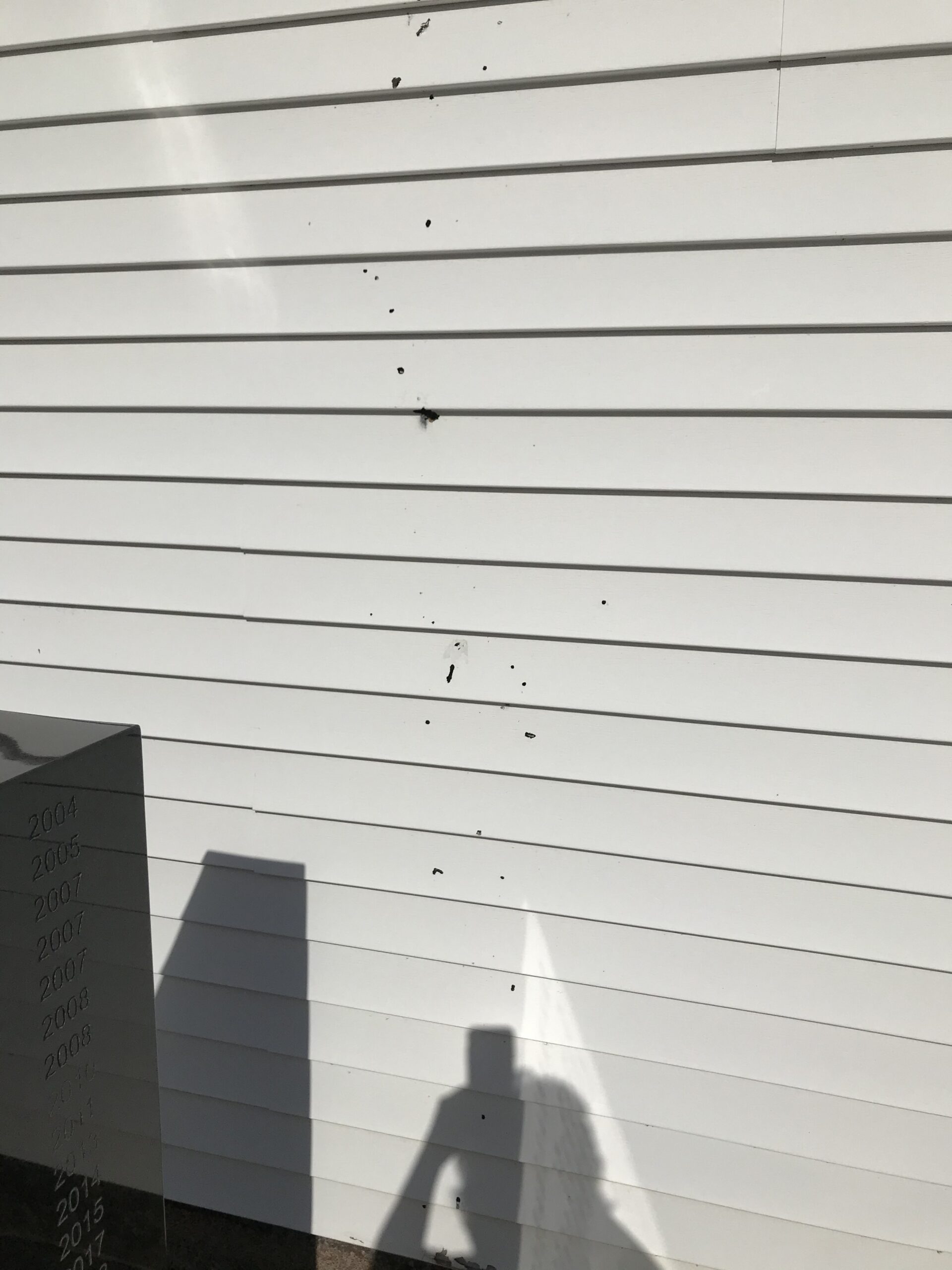 Apparent bullet holes in the side of the Onslow fire hall. Photo: Jennifer Henderson

The SIRT report does not say how it was determined that just five shots were fired. The report provides an exhaustive review of 7,731 police radio transmissions, but it doesn’t provide a simple inventory of ammunition pre- and post-shooting or the number of shell casings collected at the scene, either of which could be used to document the number of shots fired.

The SIRT report also doesn’t give any indication of how many people were at the fire hall, but Henderson reported there were five people present — three Belmont firefighters inside the hall, and an EMO official and a Pictou County RCMP officer outside; the latter two are apparently AP1 and AP2.

2 men jumped out, ran towards the firehall. One went in the ditch the other hid behind the garbage bin and opened fire. The EMO {civilian} ran inside the firehall and the police officer hid behind his car waving his hands hollering at them not to shoot. Turns out it was 2 police officers in the Hyundai. One of them went around the firehall. The other went inside for a split second then they both walked towards their car and left. I live directly across from the firehall and watched the whole thing. I thought the shooter was in my front yard! I have since heard from someone who was in the firehall that the officer didn’t even ask if they were OK.

SIRT doesn’t have the mandate to rule on police behaviour, and so the report offers no opinion about whether leaving the scene without checking to see if the firefighters “were OK” was proper.

As conveyed in the report, SO1 and SO2 were in the midst of the fog of war, and reasonably concluded that AP2, wearing a reflective vest, was in fact GW:

Based on everything SO1 and SO2 had seen and heard since coming on duty and what they had just observed, they had reasonable grounds to believe that AP2 was the killer and someone who would continue his killing rampage. They discharged their weapons in order to prevent further deaths or serious injuries.

The totality of the evidence establishes that the SOs had reasonable grounds to believe the person they saw, who was disobeying their orders, was the mass murderer who had, in the preceding hour, killed three more persons. Viewed objectively, in light of the protections afforded to peace officers by Section 25 of the Criminal Code, the totality of the circumstances, in what was a rapidly unfolding series of events, establishes that SO1 and SO2 had a lawful excuse when they discharged their firearms.

Accordingly, no criminal offence was committed, and no charges are warranted against either officer.

It would have been nice to hear the perspective of AP2, who appears to have been an EMO officer. Did he think that the man dressed as a cop telling him to put his hands up was GW, and so that’s why he ran away? That’s a reasonable assumption, but the SIRT report doesn’t say.

We do, however, have the reaction of the Onslow Belmont Fire Brigade, which posted the following on its Facebook page last night:

The Nova Scotia Serious Incident Response Team has published their findings into the April 19, 2020 RCMP shooting at the Onslow Belmont Fire Brigade fire hall. The report has left us frustrated and disappointed that there will be no accountability for the RCMP. Their actions that day endangered lives, damaged property and caused mental health issues for many of the people involved. Onslow Belmont Fire Brigade will move past the horrific events of that day and we will continue to act in an accountable, safe and professional manner with all our first responder partners and our community.