You are here: Home / Featured / The convention centre property tax bill for this year alone is $3.6 million more than expected

1. After the Gold Rush: the toxic legacy 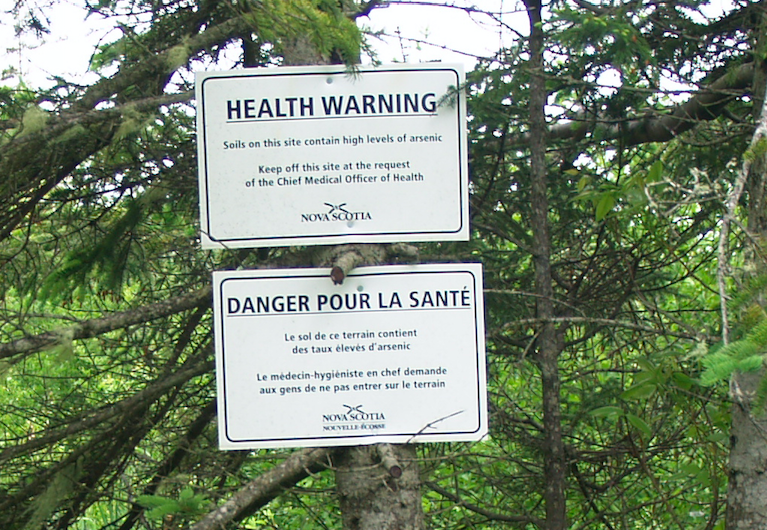 Historic mining sites at Montague in Dartmouth have been closed to the public because of high arsenic in the tailings from more than 150 years ago. Photo: Joan Baxter

“If learning from past mistakes were a government tradition in Nova Scotia, the current government would not be exhibiting all the symptoms of gold fever,” writes Joan Baxter.” But it is, and it looks like a raging bout of the affliction.”

Baxter goes on review the toxic legacy of past gold rushes in Nova Scotia, and says there is little reason to believe that current mining practices will preclude a similar legacy for the current gold rush; she concludes:

One might think that the toxic and expensive legacy of earlier gold rushes would serve as a lesson to those that govern us, convince them to be sceptical of boom and bust extractive industries that bring little except a few short-lived jobs and leave the environmental mess behind for future generations to deal with.

One might think that the government would choose to tackle the historical problem left behind by earlier gold rushes before blindly pursuing yet another one, and adding to the problem.

One might think that, if learning from the past had ever been the Nova Scotia government way.

Click here to read “After the Gold Rush: Nova Scotia is ignoring the toxic legacy of past mining manias while rushing headlong into the next.”

2. The convention centre property tax bill for this year alone is $3.6 million more than expected 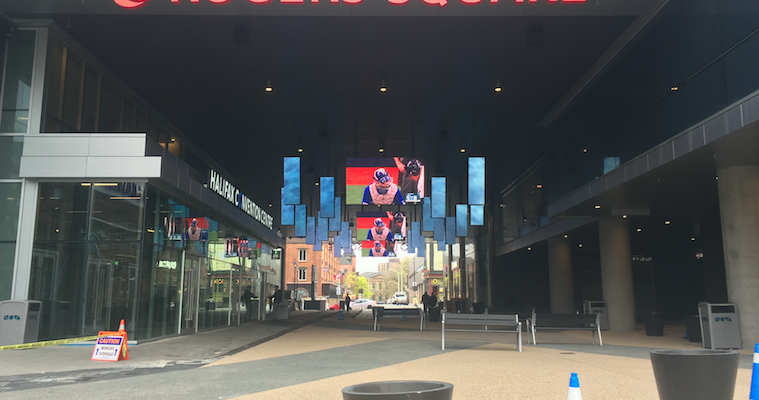 Tomorrow, Halifax council’s Audit Committee is meeting to consider the reallocation of this past year’s $26.1 million budget surplus. The surplus mostly reflects some very large property sales, which in turn led to an unexpected windfall via the deed transfer tax.

Some of the transfers are not controversial — $700,000 is going towards the election reserve fund, and $238,200 is going to speed up the installation of side guards on trucks, for instance. A $2 million transfer to the Parkland Development Reserve is indicative of the Birch Cove Lakes-Blue Mountain purchase and the upcoming land purchase at the Dingle.

The bulk of the surplus — $17.6 million — is going into unnamed capital projects via the Capital Reserve Fund and the General Contingency Reserve. I worry this is the first drip of funding for a stadium project, but the word “stadium” does not appear in the staff report.

Along the way, the report makes a rather back-handed reference to the convention centre:

No further explanation is provided.

So here’s what’s happening: expected tax receipts from the Nova Centre are far lower than expected, while tax bills for the convention centre part of the complex are far higher than expected.

Meanwhile, the convention centre is nearly completely empty this summer. There is one — one! — event scheduled through the entire months of July and August, and that one event is organized by the Halifax Police Department, so it’s actually a cost to the city, not a source of revenue — the rental fee charged to the police department means shuffling money from one city budget line to another, losing half the transfer to the province along the way.

We’ll never get a true accounting of the convention centre, but reality is showing that the sales job for the thing was utter bullshit. 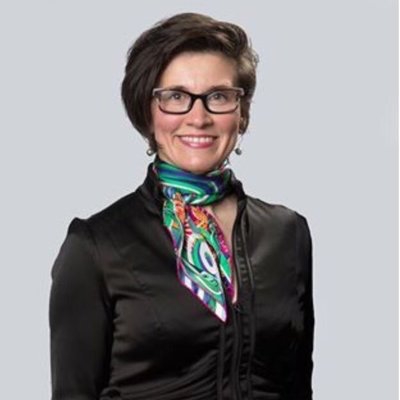 Houston made the announcement Monday citing “unfounded and mean-spirited comments” by Paon aimed at the Speaker’s office and members of the all-party House of Assembly Management Commission.

Paon has been embroiled in a spat over the parking lot at her constituency office in St. Peter’s, N.S. She had been ordered by the commission to have part of the gravel lot paved in order to comply with accessibility rules.

On Friday, she suggested in an interview with CBC News she would fight the move and that she felt bullied and harassed.

On Monday, Houston said her public comments to CBC News were the “last straw.”

“The comments … alluding to harassment from the committee members or people in the Speaker’s office being unreasonable, those are the ones that I took particular offence to,” said Houston during a brief conference call with reporters from his constituency of Pictou East.

I was surprised to find wide support for Paon on her Facebook page yesterday.

4. Vision Nothing Close to Zero

“Councillors are concerned that the municipality’s road-safety strategy won’t hit its goal after a disappointing progress report,” reports Zane Woodford for Star Halifax:

The plan follows the Vision Zero principle — an international road safety strategy to reduce injuries and death from traffic collisions to zero — although Halifax has only committed to move “towards zero.”

Almost a year into the plan, Halifax Councillor Waye Mason is worried the city won’t even hit the more manageable goal.

“I just don’t see how we’re going to get to 20 per cent in five years,” Mason said at last week’s meeting of the transportation standing committee. “We’re now at the end of our first year and we haven’t had a lot of concrete actions. We’re still in study mode.”

By all appearances, the 20 per cent goal is just an arbitrary number, picked out of the sky, and the discussion around the committee table last week reinforced that impression. With the number starting at only 15 per cent, Councillor Shawn Cleary proposed upping it to 20 per cent, pointing out that the Swedes managed a 42 per cent reduction in fatalities in 10 years, so maybe we could do 20 per cent in five.

The problem with a goal like this is it runs squarely into a moral conundrum, ever so neatly laid out in this video by the folks at the Transport Accident Commission of the Australian state of Victoria, who interviewed people on the streets of Melbourne about road fatalities. The interviewers asked people for a reasonable goal to set for the number of fatalities in their state, and answers ranged from 50 to 150 deaths per year. The same people were then asked to set the fatality goal for their family. You can guess the result, or watch it for yourself here:

Even considering the inherent problems of any numerical goal short of 100 per cent, that’s not actually my biggest concern about Halifax’s nearly-approved SRSP. Twenty per cent is just a short term goal, after all. And while it features too prominently in this plan, we probably shouldn’t get obsessed with what is essentially an arbitrary number based on some sense of achievability.

What deserves more scrutiny is the vision of the plan, and the basic principles behind what it promises to actual deliver on our streets.

The vision for Halifax’s SRSP is: “Moving Towards Zero Fatalities and Injuries for People Using Any Mode of Transportation.” It sounds appropriately aspirational, but what you need to notice is that the writers have specifically chosen “Towards Zero” instead of naming it “Vision Zero,” the Swedish safety program that revolutionized road safety in that country, and made the Swedes experts in safe street building.

This in itself is not a problem, a-rose-by-any-other-name and all that. But a reading of the plan reveals that HRM’s Towards Zero is not Vision Zero by another name, but rather a more cautious, less transformational approach altogether. It’s a vision where we can commit to moving towards zero deaths and injuries (eventually), and then agree to just do more of what we are currently doing. Even though the stated principle of the plan is “Do different, do more,” it’s clear that the thrust is simply, “do more.” (And even then, with no budget asks or estimates, even the “do more” is questionable.)

The collapse of Newbridge Academy is of course bad news for students and parents. I am, however, curious about the educational model. Best I can understand it, the idea seems to be that the school would be an entry point into professional sports, or at least to a sports scholarship for university.

I think some sort of physical activity should be a part of young people’s lives, but the singular focus on “making it” in a sport, as opposed to simply participating and having fun, is corrupting sports generally and will, I fear, end up undermining broad participation in sport. If all that matters is to be a star, why play if you’re not going to be the next Sydney Crosby?

I fear we’ve taken the fun out of sport.

Special City Council (Tuesday, 12:45pm, City Hall) — council is having a special summer meeting to finally approve the Centre Plan, which will be shelved and otherwise ignored by council at the very first opportunity.

Human Resources (Tuesday, 10am, One Government Place) —
Margo Riebe-Butt, the executive director of Nourish Nova Scotia, will talk about the School Breakfast Program.

Headline writing is an art, and one that I have not mastered. Sometimes I try to make pop culture references in the headlines I write; I don’t know if that works or not, but I have fun with it.

Last night, I couldn’t come up with a catchy headline for Joan Baxter’s piece, so I set it aside and slept on it. Not much better this morning, so I simply googled “gold rush songs” and came up with Neil Young’s “After the Gold Rush”; Baxter was writing about the toxic legacy of gold rushes past… so, badda bing, as the mobsters say.

I’ve heard the song probably a thousand times through the years, but never really listened until this morning. Lyrically, it’s fantastic. I think Mr. Young may have a future in the biz:

The Wiki entry on the album of the same name relates that:

Songs on the album were inspired by the Dean Stockwell–Herb Bermann screenplay for the unmade film After the Gold Rush. Young had read the screenplay and asked Stockwell if he could produce the soundtrack. Tracks that Young recalls as being written specifically for the film are “After the Gold Rush” and “Cripple Creek Ferry.” The script has since been lost, though has been described as “sort of an end-of-the-world movie.” Stockwell said of it, “I was gonna write a movie that was personal, a Jungian self-discovery of the gnosis… it involved the Kabala (sic), it involved a lot of arcane stuff.”

I have no idea what that last sentence means, but this is fun stuff.