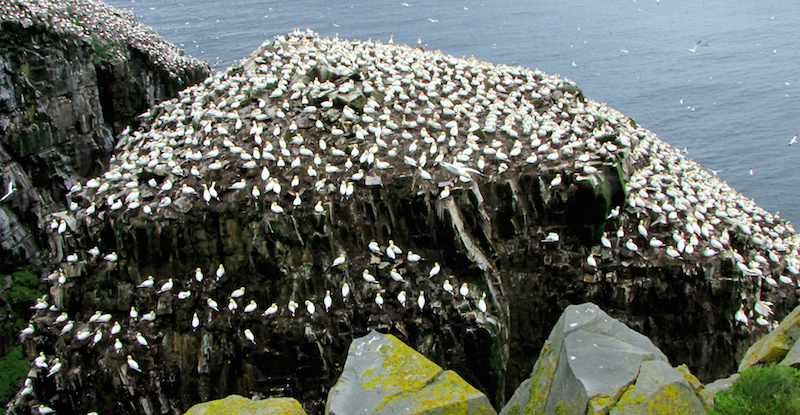 1. What the wild things say

The famed gannets at Cape St. Mary’s in Newfoundland are abandoning their chicks, repeating an unprecedented abandonment in 2012. Gannets have been observed for centuries, and the one consistent observation is that “gannets never abandon their chicks,” biologist Bill Montevecchi tells the St. John’s Telegram:

One parent stays with the chick while the other goes out to sea to feed and collect food for their young. There are simply too many predators around for a chick to be left alone.

Nevertheless, this year when a call came in about peculiar behaviour being noticed at the colony, it was again abandonment of the chicks by the parents, albeit on a smaller scale than the all-out desertion seen in 2012.

“What is happening this year is not as extreme, but it is extreme,” Montevecchi says.

Montevecchi says one third of the chicks at the colony this year look as though they have been deserted.

The cause? Probably climate change:

“The water temperature was outside the box extremely warm in 2012. It’s warmer this year in 2014,” says Montevecchi.

He describes it as a sudden pulse in water temperature that drives the gannets to desperately cast off — one day there and the next gone — but it’s a sudden spike caused by a long-term trend in climate change. The gannets seem to be going further and further to find colder waters and the types of fish that frequent them.

“What does that parental absence mean? It means those adults are out there hunting for food and they’re going a very long ways away,” Montevecchi says.

Those are survival trips, he adds. The adults are going a long way to feed themselves, but that means there will be nothing to feed the young when and if they come back. In the parents’ absence, the chicks become prey. They grow weak with hunger and fall off the cliffs. They starve.

The CBC adds that:

[Montevecchi] wonders if the gannets are starving because their usual prey of mackerel and other fish have retreated to deeper water, or farther out to sea where the water is colder.

“There’s something going on with warm water and the unavailability of the fish the gannets would normally be getting at this time of year.”

Records show most of the waters off the east coast are three degrees warmer than usual.

“That extra warmth, that persistence of southerly flow, American air, coming northward, the lack of Arctic air around Newfoundland is probably helping those water temperatures be as surprisingly warm as they have been.”

Why does this matter? Well, here’s another alarming data point of the effects of the warming Atlantic on wildlife. Even if you don’t care at all about wildlife, you should probably be concerned about the potential dire consequences these changes could have on Nova Scotia’s economy.

Two more data points: There’s been a 10-20 percent increase in great white sharks in the waters off Nova Scotia and puffins are failing to raise their young in the Gulf of Maine. Like the gannets abandoning their chicks, the appearance of more sharks and the failure of puffin parents are both attributed to warming Atlantic waters.

Here’s how Rowan Jacobsen explained the situation in Mother Jones this spring: 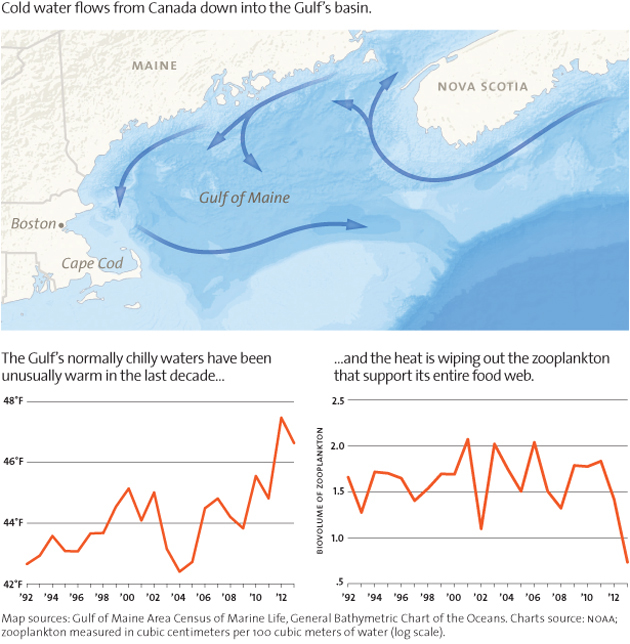 ON A MAP, the Gulf of Maine looks like an unremarkable bulge of the North Atlantic, but it is unique. A submerged ridge between Cape Cod and the tip of Nova Scotia turns it into a nearly self-contained bowl. Warm water surging up the East Coast glances off those banks and heads for Europe, bypassing the Gulf of Maine and leaving it shockingly cold. (I’m looking at you, Old Orchard Beach!) Meanwhile, frigid, nutrient-rich water from off the coasts of Labrador and Nova Scotia feeds into the Gulf through a deep channel and gets sucked into the powerful counterclockwise currents. Whipped by that vortex, and churned by the largest tides in the world (52 feet in one bay), the Gulf of Maine acts like a giant blender, constantly whisking nutrients up off the bottom, where they generally settle. At the surface, microscopic plants called phytoplankton combine those nutrients with the sunlight of the lengthening spring days to reproduce like mad. That’s how the thick, green soup that feeds the Gulf’s food web gets made. The soup is so cold that its diversity is low, but the cold-water specialists that are adapted to it do incredibly well.

At least, they used to.

Like much of the country, the Northeast [United States] experienced the warmest March on record in 2012, and the year just stayed hot after that. Records weren’t merely shattered; they were ground into dust. Temperatures in the Gulf of Maine, which has been warming faster than almost any other marine environment on Earth, shot far higher than anyone had ever recorded, and the place’s personality changed. The spring bloom of phytoplankton occurred exceptionally early, before most animals were ready to take advantage of it. Lobsters shifted toward shore a month ahead of schedule, leading to record landings and the lowest prices in 18 years.

Let’s repeat that last part: “Lobsters shifted toward shore a month ahead of schedule, leading to record landings and the lowest prices in 18 years.”

Fishermen have been hit hard in recent years by low prices for lobster, as low as $3/pound in some cases, and nowhere near the $5 or so that was considered “low” not even a decade ago. It’s difficult to fully explain lobster prices because there are so many factors at play—weakened demand from a struggling American economy, fluctuating labour prices for the workers in processing plants, and a cartel-like hold on the industry from a small number of distributors, to name a few—but all those factors are playing out in the context of warming Atlantic waters. As the CBC explained in 2012:

A glut of lobsters has driven down the price of the prized crustacean in the Maritimes, leaving fishermen scrambling for ways to prop up their earnings.

There’s a number of factors influencing the bountiful supply. Warmer water temperatures are causing lobsters to move around more, making them more likely to enter traps, said [Bedford Institute of Oceanography scientist John] Tremblay. He said there are also fewer predators due to a decline in groundfish like cod.

While the people who actually catch the lobsters are struggling, so far the changed lobster behaviour hasn’t obviously adversely affected Clearwater and the other big distributors, and the export of lobster remains a half-billion dollar industry in Nova Scotia.

But what if ocean temperatures continue to rise, to the point where lobsters off our southern coast can’t survive at all? The cod are gone, and we’re fishing from the bottom of the food chain, the crustacean bottom feeders. There’s nothing left to fish, unless Americans start eating plankton as a delicacy. Can Nova Scotia handle a half-billion dollar hit to its annual economy?

Wildlife is trying to tell us something. Maybe we should pay attention and start caring about climate change.

End of an era.

A taxi cab driver has been charged with sexual assault for allegedly grabbing the ass of a customer. And now Yellow Cab announces plans to install 200 cameras in its cabs by Christmas.

Taylor has a gig as a handyman on the Queen Mary 2, which was in town briefly yesterday. A guy’s gotta do what a guy’s gotta do, and more power to him; interestingly, CTV reports that between looking at Peggys Cove and buying trinkets on the boardwalk, Taylor is recording a new album.

At 4:30pm yesterday, “two groups of people” were in a fight in the 200 block of Wyse Road in Dartmouth—the part of the road that stretches from the new Sobeys to Albro Lake Road. One of the men was stabbed. He’s in hospital, but will live. Police have arrested four people.

Six hours later, police were called to Farrel Hall on Windmill Road, just a few blocks away from the above incident. Three men were involved in a fight in the parking lot, and at 10:34, when police arrived, they found one of the men stabbed and unconscious. He was taken to hospital, where he was pronounced dead. Police say “two white men wearing dark clothing” were seen running north on Windmill, but are still at large.

Yesterday, police announced that Same Obed has been released from prison and will be living in Halifax. “Obed has over 30 past convictions for a number of other crimes including attempt murder, sexual assaults and assault with a weapon,” reads the release. “[He] has been professionally assessed as a very high risk to re-offend in a sexual and violent manner.” The CBC has all the gory details of Obed’s past crimes.

1. Fracking report is good for Liberals

Don Mills cites the Ivany Report to push whatever agenda it is he’s pushing. Shots of Jager all around.

All the other stuff aside, Jim Meek basically wants to usher in the end of civilization by urging the Maritimes to mine fossil fuels. You go, Jim.

Roger Taylor, too, doubles down on his support of fracking, because who cares about the next generation? Burn that fossil fuel, baby. Tough luck, kids, we* are hoping to make a bit of money.

* “We” is not, well, we, but rather the rich people certain columnists brownnose.

5. Does anyone care what Tim Hortons does?

I’m running late this morning, so I’ll just point you to this article from Maclean’s in the spring, which gives a good and simple explanation to the problems with economic impact projections. A freelancer will soon tackle that subject in a way that hits home for Halifax. Stay tuned.

Morning File doesn’t publish on Sundays or holidays, so we’ll see you Tuesday. Have a great weekend.