You are here: Home / Featured / The city sells naming rights to dog-awful corporations so you can save… two dollars

Yesterday, the Halifax Regional Centre for Education (what used to be called the school board) notified the public that it had experienced a “privacy breach” on its EXCEL registration system:

At 8 am today, registration opened for the 2018-19 school year for returning participants enrolled in the EXCEL program. This program provides before and after school care for elementary-aged children in 62 schools throughout the Halifax Regional Centre for Education (HRCE).

At 8:37 am, the system was shut down following concerns raised by users that they could see personal information of people who had completed their registration.

Approximately 3,200 parents/guardians would have received an access code to register this morning. Of those with access, 1091 completed their registration form, and 82 had started but did not finish.

Have just spoken to a parent who tried to register his children in HRM Excel when system crashed. When he refreshed screen – other family's personal info came up. Children's names, DOB, emergency contact info. So far complete silence from @nsgov which is now responsible. #nspoli

The McNeil government took over the school boards, so now the government owns all the headaches related to the boards. Before, the government could point fingers at (supposedly) incompetent boards; now all the screw-ups, school closings, and other school problems sit directly on the government’s lap. Be careful what you ask for.

Of course, the government has always been responsible for oversight (in both senses of the word) of the school websites; it just can’t now feign ignorance.

Relatedly, yesterday the province announced that Auditor General Michael Pickup will provide “audit assistance” into the non-breach of the Freedom of Information website. I guess that’s welcome, but maybe they should have paid more attention to Pickup’s November 2016 report that specifically warned there were security issues related to provincial websites.

Oh, also yesterday, I called out Robert Samuel, the province’s Chief Information Security Officer, for among other things conducting official provincial business via his LinkedIn account. Late in the day yesterday, Samuel took down his LinkedIn post, but of course I got a screenshot of it. Here it is: 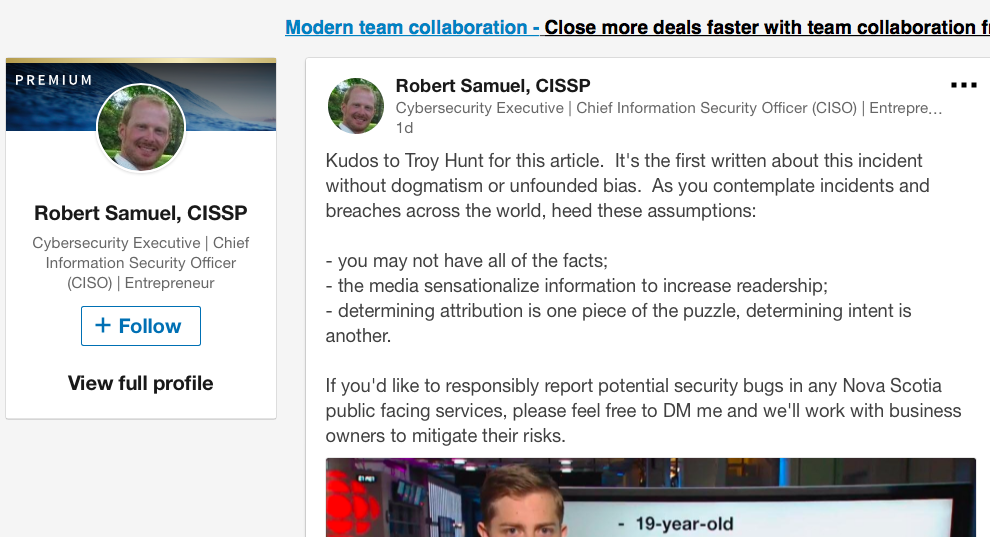 “A Jamaican cultural group says comments made by a Progressive Conservative Party leadership candidate last week during a debate in the Nova Scotia Legislature on the legalization of marijuana have deeply wounded that community,” reports Sherri Borden Colley for the CBC:

“I would say … many people are very angry. I got so many phone calls asking me, ‘What are you going to do about this?'” said Olive Phillips, the president of the Jamaican Cultural Association of Nova Scotia. “Jamaicans are a very proud people.”

“Her statements were really disrespectful and not well thought out because her assumptions are generalizations which have no basis in fact,” said Phillips, who was born in Jamaica and came to Canada in 1968.

Phillips said when she read Smith-McCrossin’s comments she, too, felt immediate anger.

“But I also thought, ‘This is total ignorance.’ I grew up in Jamaica. I never saw the marijuana plant until I came to Alberta. That’s my first introduction to drugs, believe it or not, because the general populace did not use it.”

The Chronicle Herald continues to publish advertising from Northern Pulp Mill — today in the form of “sponsored content” that has the same look and feel as adjoining news articles.

In this case, the “article” mis-contextualizes the mill’s impact on shipping through the Port of Halifax:

Northern Pulp and its parent company, Paper Excellence, is among the largest exporters out of the Port of Halifax, exporting more than 1,700 ocean freight containers every month through the port.

That at least is a fair number, but from there the piece brings in the completely irrelevant figures for the job impact of the total operations — including all the stuff that has nothing at all to do with Northern Pulp — of the Port of Halifax:

Each driver operates equipment with a capital purchase cost of $250,000 per unit, according to [NP PR rep Kathy] Cloutier. The port handles over 1,500 vessels every year and generates more than 12,400 jobs and $1.7-billion in economic impact, she says.

This is purposefully misleading the reader with a mishmash of numbers that have nothing to do with each other and which conflate Northern Pulp’s exports with the total port operations.

If it wasn’t an intentional bid at confusing the reader, I’d call it sloppy. Were I editing the piece, these are the notes I’d send back to the writer:

What does “employ 30 full-time truck drivers every month” mean? Are you implying that Northern Pulp hires 30 additional truck drivers with every passing month? Or are there just 30 drivers who have regular full-time jobs? Or is there very high driver turnover because the drivers are paid shit and treated like dirt so none of them stick around for more than a few weeks? I’m confused. Please re-word.

“Each driver operates equipment with a capital purchase cost of $250,000 per unit..” Does that mean that a truck costs $250,000? How is that relevant? Why are you bringing this into the analysis of the mill’s economic impact in Nova Scotia? Do they buy the trucks from Steele Auto? Are they manufactured in Burnside? I don’t get why the price of the trucks matter.

“exporting more than 1,700 ocean freight containers every month through the port…. The port handles over 1,500 vessels every year and generates more than 12,400 jobs and $1.7-billion in economic impact” Wait. What? So NP moves 1,700 containers through the port a month, but what does that have to do with 1,500 vessels a year calling in Halifax? Are you implying that each ship that comes into the port is picking up only NP containers? This is a mess. The two don’t have anything to do with each other. How can you possibly imply that NP is responsible for $1.7 million in economic impact? That’s just a flat-out lie.

Are you taking bribes from Northern Pulp? Because that would totally violate the Halifax Examiner’s freelancer policies.

But of course, I’m not editing the piece, and no one at the Herald is editing it either. 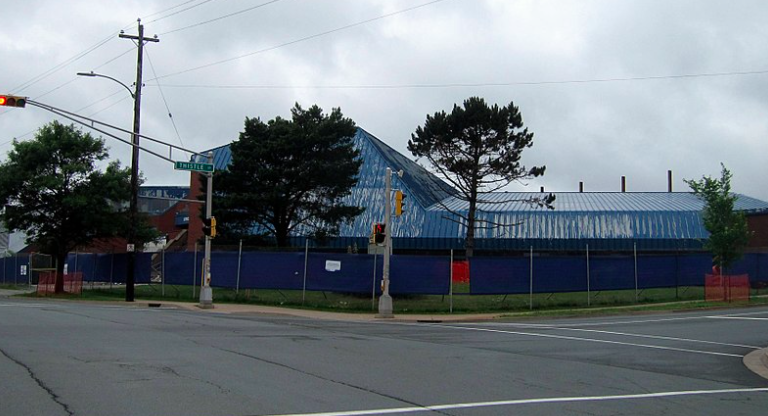 I wrote about this yesterday, but it was buried in the government listings, so I’ll repeat myself here today:

Today, Halifax councillors will approve (there’s no doubt about this, because they can’t even understand the counter-argument) allowing the Dartmouth Sportsplex to sell naming rights to some usurious bank or price-fixing supermarket chain or conniving phone company or toxic waste spewer or some other dog-awful corporation. The staff report LIES! with the following justification:

The sale of external naming rights of publicly owned facilities is a practice which has been widely adopted to finance construction and/or maintenance of facilities, and is the subject of Administrative Order 56. HRM has pursued opportunities related to a few of its assets with the sale of naming rights for the BMO Centre in Bedford, Emera Oval and Molson Plaza; and, more recently, Scotiabank Centre and the Dartmouth 4- Pad. Regional Council also directed staff to explore opportunities for the Dartmouth Sportsplex (DSP) as part of the revitalization project. [emphasis added]

The Sportsplex renovation is costing the city — which is to say the public, which is to say you and me — $22 million; so unless Dog-Awful Corporation is ponying up $22 million, then anything it pays for naming rights is simply advertising on a public building, which you and I are subsidizing.

“Oh, but anything we can do to reduce government’s costs!” say unreflective people everywhere, not realizing that we could simply increase the commercial tax rate a few pennies and pay for all the rec centres needed without plastering Dog-Awful Corporation’s name onto our buildings and into our minds and common discourse.

Councillors and much of the public have been so indoctrinated into corporate framing that they can’t even conceive of a different understanding of naming rights. It’ll be the end of us.

To that, reader Patrick Casey adds:

Halifax: We’ll whore anything out for a buck or two. Literally.

Here’s how much the average HRM resident benefits from the naming game.

Tax rates are a little more complicated than that — the bulk of municipal tax revenue is collected from businesses, not directly from residents — but Casey’s point is valid: we’re selling our municipal soul for peanuts. Less than peanuts, actually. Like for the salt that’s left over on the bottom of the peanut can.

Incidentally, I won’t be at today’s council meeting because I’m on an all-day reporting assignment. Besides the naming rights thing, council will also approve the Wanderers Ground stadium agreement with Sports Entertainment Atlantic and debate hurting Mark Lever’s fee-fees.

The city continues to contract out services in order to avoid paying people doing needed city work a decent wage.

Today, the city has issued a tender for janitorial services of outside washrooms; click here to see the full list and expected cleaning schedules.

Contracting this work out necessarily condemns the workers to poverty wages. It is long past time for Halifax city council to adopt a living wage ordinance requiring that all companies doing work for the city pay their employees a living wage. 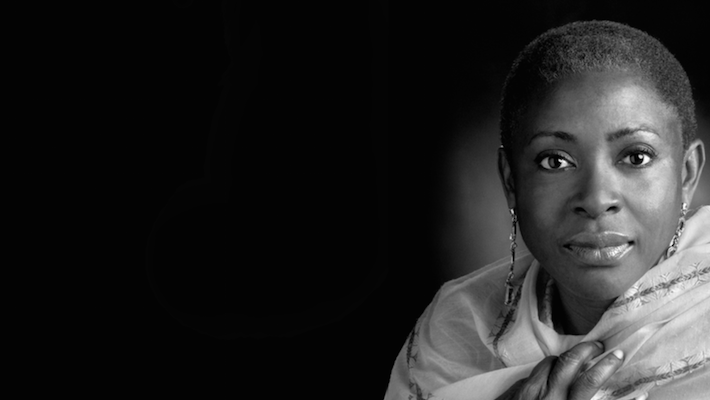 Afua Cooper has been named the city’s next Poet Laureate.

Community Design Advisory Committee (Wednesday, 11:30am, City Hall) — discussion of issues that appear to be related to the proposed Centre Plan, although the agenda doesn’t come right out and say that. 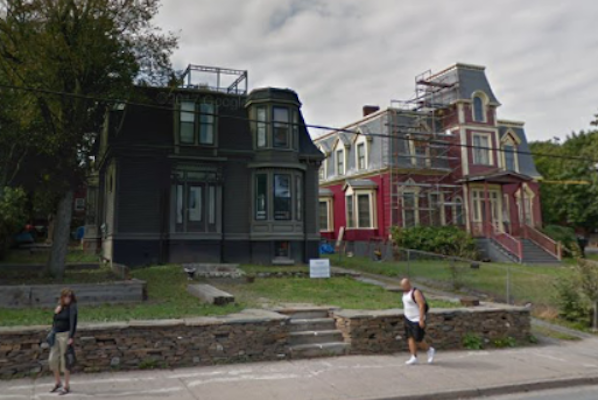 Heritage Advisory Committee (Wednesday, 3pm, City Hall) — Myles Baldwin, Shane Beehan, and Jillian Demmons want to open a restaurant and pub — they’re calling it the Narrows Public House — at 2720 Gottingen Street, which is a registered heritage property directly across the street from Stadacona. If approved, the pub will be on the first floor, with three apartments on the second. The owners have been renovating the property for some time (I’ve noticed their stone work out front).

The house itself is a registered historic property, but the staff report doesn’t give any details about its history. Staff says the proposal is “reasonably consistent” with heritage policies, and the recommendation is to have some limited constraints on the operation of the pub — closing at 11:30, and the like.

The house, however, is in a residential neighbourhood and directly next door to Elizabeth Pacey’s house, a “quite a bit older” heritage property. Pacey says the operation of a pub next door will make her house unrentable. Sandra Patterson, who owns the house on the other side of the property, is also opposed.

There was a public hearing last summer on the proposal, and it’s interesting to read the wide range of comments made (scroll to the end, here). Some neighbours are fully supportive, citing the already high transient population brought in by the Airbnb-ing of the neighbourhood; while others worry about additional delivery traffic, noise, and in Patterson’s words “bringing alcohol into the neighbourhood with a women’s shelter a few doors down.”

Human Resources (Tuesday, 10am, One Government Place) — a review of child care services and the Pre-Primary Program.

I don’t have a copyediter (see what I did there?) this morning; please be kind.