You are here: Home / Commentary / The Chronicle Herald unfairly maligns kids in its attack on refugees

Reports of students choking, pushing, slapping and verbally abusing their fellow classmates are causing parents to worry about the school’s disciplinary action.

Refugees in the news

Much of the reaction to the Chronicle Herald article on social media was related to the allegation that refugee children are a problem.

Leading up to last fall’s election, Justin Trudeau campaigned with a pledge to accept 25,000 Syrian refugees to Canada. His Liberal Party of course won a majority in Parliament, and as prime minister Trudeau has lived up to his pledge. While the process has taken a little longer than promised, as of last week, 26,213 Syrian refugees have arrived in Canada.

The Canadian public has mostly supported the refugee policy, and communities across the country have mobilized to sponsor refugee families and provide the needed services.

But the reaction south of the border has been less enthusiastic. In March, an Ipsos poll found that about 50 per cent of Americans thought the refugees coming to Canada posed a security threat to the United States. And Republican presidential candidate Donald Trump has stoked anti-refugee sentiment, saying that if elected he would deport Syrian refugees.

While it’s not the prevailing attitude in Canada, some of the American anti-refugee sentiment is shared north of the border. In March, Toronto legal scholar Azeezah Kanji catalogued some of the uglier reactions:

An online Care2 petition asking the government to “stop resettling 25,000 Syrian refugees in Canada” has garnered almost 50,000 signatures, accompanied by comments such as “terrists [sic]” and “If the Liberal Government wishes to increase the number of refugee’s [sic] to Canada, BRING IN THE CHRISTIANS. I don’t think Mr. Trudeau will as he seems to be dedicated to the Muslim Brotherhood.” Calgary schools have been defaced by anti-Muslim graffiti, most recently two weeks ago. In January, a group of Syrian refugees attending a welcome event in Vancouver were attacked with pepper spray. Anti-immigrant groups have organized demonstrations in Canada; Pegida Quebec’s march in Montreal on Feb. 6 was shut down by activists.

As Chris Parsons points out, there was an immediate xenophobic reaction to the Chronicle Herald on Facebook. But not just Facebook. A quick google search this morning found the following: 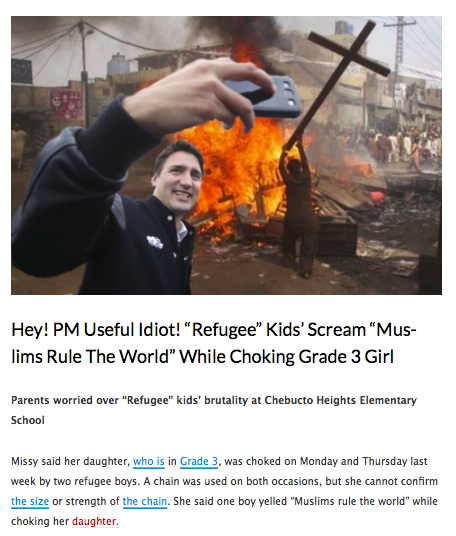 I am not arguing that any problems associated with refugees should not be reported because xenophobic and crazed right wingers will use the articles to advance their own warped causes. But this article fails as reporting.

In the article, several disturbing details were offered by an pseudonymously named parent, “Missy”:

Missy said her daughter, who is in Grade 3, was choked on Monday and Thursday last week by two refugee boys. A chain was used on both occasions, but she cannot confirm the size or strength of the chain. She said one boy yelled “Muslims rule the world” while choking her daughter. School staff intervened, but to her knowledge, the students were not disciplined further.

But this morning, the headline on the online version of the article has been changed to “Chebucto Heights bullying worries parents” and the allegations that a chain was used in an attack and that the boys yelled “Muslims ruled the world” have been removed. The paragraph now reads:

Missy said her daughter, who is in Grade 3, was choked on Monday and Thursday last week by two refugee boys. School staff intervened, but to her knowledge, the students were not disciplined further.

There is no editorial note explaining the changes. I’ve archived the original article here, and the revised article here. I’ll update this page if there are further revisions. Update: the article has now been removed completely. There is still  no explanation.

Surely an attack with a chain would be reported to the police, no? Last night, I asked the police department if they had any record of such an attack, and spokesperson Lauren Leal responded this morning as follows:

I looked at the calls from Jan 2016 to present and did not find an incident that correlates with what is described in the article. We did receive one complaint from a parent who reported an assault that occurred on February 19 involving a six-year-old assaulting another six-year-old. We have limited information, as the parent reported for information purposes only and requested no further police action.

At best, then, we have a parent who was so concerned about an alleged attack with a chain that she called the local newspaper, but not so concerned that she would call the police.

Without an editor’s note explaining the changes, we’re left with guesswork. Possibly, the facts were simply incorrect— there was no chain involved and no one yelled “Muslims ruled the world,” and so those details were removed.

Or maybe the original article wasn’t clear enough. Was the “chain” actually a necklace?

Another possibility is that in light of the negative social media reaction, the paper changed the story to tone it down and take out the most disturbing details.

But whatever the reason for the changes, without an explanation for them, the paper will rightly be perceived as dishonest and untrustworthy.

When I first read the article I thought the reporting could be incorrect because the chain of evidence was too long: an unnamed child told an unnamed parent something that was relayed to an unnamed reporter, who wrote an article that was vetted (or not) by an unnamed editor.

It’s impossible to ignore that this article was written during the strike by the Chronicle Herald newsroom employee union, which represents reporters, photographers, and some editors. During the strike, Chronicle Herald management has hired temporary “replacement workers” to fill in on reporting, and the paper is not publishing bylines on the articles produced by the scabs.

One could argue that the no-bylines policy is meant to protect the reporters from retaliation by striking reporters. But another byproduct of the policy is that there is a lack of accountability. We don’t know who to blame for the reporting. We don’t know if the reporter has an axe to grind, or has been responsible for other unfair or inaccurate articles.

The lack of accountability extends to the editors. Two of the pre-strike editors — Brian Ward and Paul O’Connell — are not members of the union and so remain at the editing desk. But three other editors who are unionized are walking the picket line and their seats at the editing desk are being filled by advertising staff and other non-journalists. Ward and O’Connell have good reputations as editors, and would likely have flagged the article in question. It appears to me that the article in question went through the other, non-journalist, editors.

The point of publishing the article seems to have been to get content out, possibly content that generates wide discussion, and never mind the ethical considerations.

Moreover, at the heart of the story are allegations made by a pseudonymous parent — essentially, an anonymous source. There’s a disturbing lack of context given to the decision to grant the parent anonymity.

However, as Chris Parsons points out, the article uses the parent’s nickname — Missy — and a Facebook user by the name of “Missy Karma Lewis” has weighed in on the discussion:

But the biggest problem I have with the Chronicle Herald story is that it violates basic ethical guidelines about reporting on children.

Generally, we don’t report on alleged violence at elementary schools at all, unless it rises to the level of a lockdown and a police response that warrants notifying the broader community. I can’t think of any previous Chronicle Herald story about an alleged schoolyard fight at an elementary school.

Our legal system recognizes that children under 12 years of age can’t be held criminally responsible, and for good reason: Children are not fully formed. They are still learning how to function in the world, are not thoroughly socialized, and have only the beginnings of an understanding of morality and right-and-wrong. They’re kids! Every kid screws up, acts inappropriately, has trouble. That’s why we have parents and adult professionals charged with helping them in the journey.

Beyond that, these particular children came from a war zone. The horrors they have seen by age eight likely exceed anything most of the readers of the Chronicle Herald article could even imagine. They then were removed from their friends and extended families and took a long journey that brought them to a strange land with different languages and customs.

Is it believable that these kids might have some problems adjusting? Sure. But what kind of person uses traumatized children as pieces in a public relations game? We can expect as much from the Ezra Levants of the world, but reporters are held to a higher standard.

Reporters should recognize the long-term implications of what they write with regards to children. It’s one thing to praise a kid for being an environmental advocate, or being a good basketball player, or what have you. A positive news story about a young person will likely leave that kid feeling good and build self-esteem.

It’s entirely a different thing to label a child as a “brutal” thug. The Chronicle Herald article will be referenced by the refugee kids’ peers, no doubt as soon as tomorrow. It will be used to stigmatize and alienate the boys. It will slow their integration into society and may serve to marginalize them for years to come. It may screw up the rest of their lives.

Again, we’re talking about kids. We don’t know their exact ages, but they’re probably younger than 10.