It rained a lot yesterday. Thankfully, CBC was here to document it. 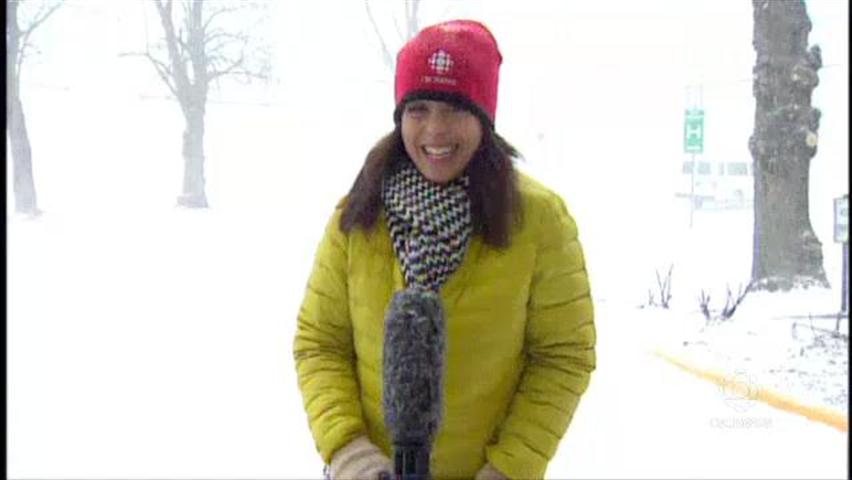 At 6:30am, the Bedford Highway was closed between Flamingo Drive and Bayview Drive due to flooding, so it looks like the morning commute will be a mess. Anjuli Patil is on it.

Environment Canada has issued another one of its “Rain ending this morning. This afternoon: Rain.” forecasts. So run outside at 11:47am and catch the glorious moment.

Police are investigating the region’s latest pedestrian accident after a man was hit in a crosswalk on Highway 107 in the Forest Hills area on Wednesday morning.

The RCMP say the man was crossing the busy stretch of road in a crosswalk from a grocery store to a gas bar when a vehicle leaving the gas station turned left onto Highway 7 and struck the victim.

The accident happened at about 6:30 a.m.

The 33-year-old was taken to hospital by paramedics with non-life threatening injuries.

Police are now investigating the cause and say they haven’t decided on any charges.

Yesterday evening, via a police release to reporters:

At 5:30 pm, at the intersection of Henry St and Watt St in Halifax a pedestrian was struck by a vehicle. The 48 year old pedestrian was walking across Henry St when she was struck by a vehicle, she fell to the ground. She was taken to the QE 2 for assessment. The 41 year old male driver was issued a Summary Offence Ticket for failing to yield to a pedestrian.  At the time of the accident it was raining heavily and dark.

Last night, via a police release to reporters:

At 9:50 pm, a 22 year old pedestrian was crossing Mumford Rd, she was in a marked cross walk , near the shopping mall entrance. She was struck by the front passenger side of a large white vehicle, possibly a SUV, with a hatch back. This vehicle did not stop at the accident or provide any information to the pedestrian. No further description of the suspect vehicle or driver.

The women was assessed by EHS at the scene, it was suggested she attend the hospital for further treatment of her possible injuries.

This morning, via a police release to reporters:

At 7:45 AM – HRP Officers are at the scene of a motor vehicle collision involving a pedestrian. The incident occurred at the intersection of Agricola St and Russell St. in Halifax. The pedestrian, a 26 year old woman, was crossing Agricola St at Russell St when she was struck by a 62 year old man who was making a left hand turn from Russell St. onto Agricola St. The pedestrian has suffered what appears to be minor injuries but has been taken to hospital for assessment.

This matter remains under investigation at this time.

Half the stuff that’s dumped in Nova Scotia’s dumps could be recycled or composted, says the Ecology Action Centre. 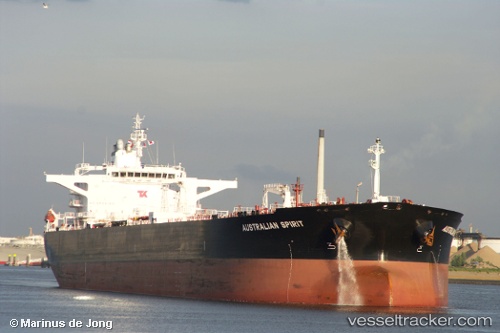 The Australian Spirit, an oil tanker, is adrift off the coast. See “On the harbour” below for more. 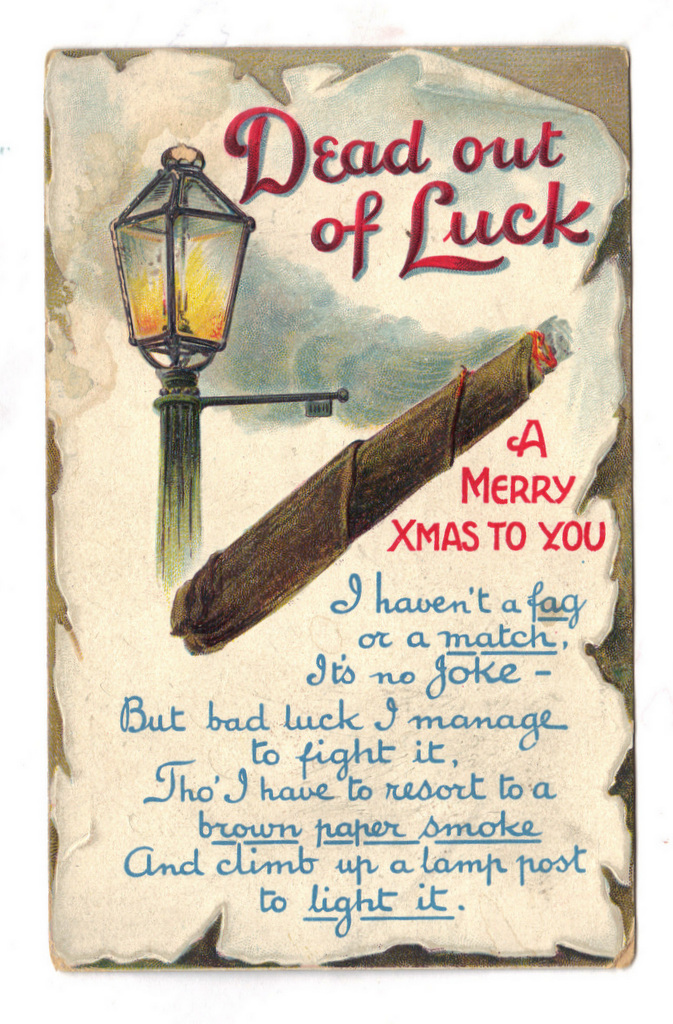 Stephen Archibald breaks out his collection of 19th century Christmas cards. “I assume they were hilarious in their time but today it takes some unpacking to get the point,” he notes. “There is just enough depth to the collection to suggest several themes (we are always looking for patterns). Most of the cards feel masculine, maybe someone in my family particularly saved manly cards. ” 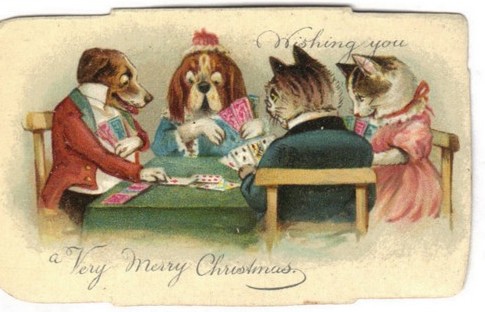 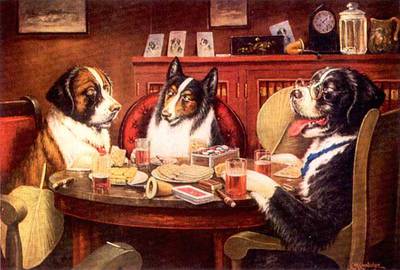 Included is an image of dogs and cats playing whist; in 1903, the Brown & Bigelow Company commissioned artist C.M. Coolidge to produce a series of ads with the theme of Dogs Playing Poker, which look a whole lot like the earlier Christmas card in Archibald’s collection.

This should be fun. If the latest piece of legislation introduced in Parliament, the Price Transparency Act, gets passed, it will require companies to explain why their Canadian prices are so much higher than the U.S. price. 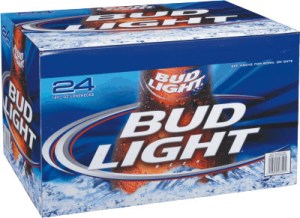 So that will mean we can now ask the Nova Scotia Liquor Corp. to explain how and why a case of Bud Light costs approximately $50 here and only $18 in the U.S.

Is it because of the fancy stores, the glossy brochures and magazines, the unionized labour force, the highly compensated executive team? Things they supposedly need to beat the competition? What competition? Come on, ’fess up! What’s the real reason? Good old price gouging?

Appeals Standing Committee (10am, City Hall)—a couple of Dartmouthians are appealing their citations.

Veterans Affairs (9am, Room 233A, Johnston Building)—Bruce Belliveau, the CEO of the Commissionaires, will be the witness.

…generally last one to two hours and involve looking at various astronomical objects through the telescope and discussing the nature of these objects.

We also use a fenced-in Observation Deck on the roof of the building to show you the constellations or objects in one of our smaller portable telescopes.

These events are suitable for about ages 8 and up.

I spend much of my walking around and on-the-bus time listening to podcasts. One of the most enlightening is the series produced by the London School of Economics. I’m way behind, so only listened to Danny Dorling’s October talk on “Inequality and the 1%: what goes wrong when the rich become too rich” yesterday. It’s worth a listen.

Dorling’s talk is specific to Britain, but he brings in enough international information and analysis to be of interest to North Americans. He also has a series in the Guardian about inequality. 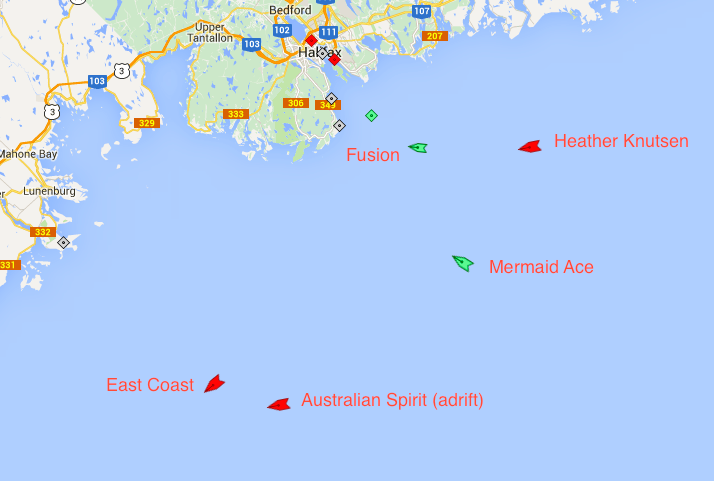 The ocean near Halifax Harbour, 6am Thursday. Note the Australian Spirit, adrift. The tanker East Coast is passing by, en route to Saint John from Charlottetown. Map: marinetraffic.com with annotation from Halifax Examiner

A tanker carrying 90,000 tonnes of crude oil is adrift off the coast of Nova Scotia after losing steering Tuesday evening.

The Canadian Coast Guard says there’s no danger to the crew of nearly two dozen on board the Australian Spirit. It says it is monitoring environmental risks, but so far there are no issues.

The 250-metre ship is roughly 40 nautical miles from Chebucto Head, near Halifax. The ship was travelling from Placentia, N.L., to New York.

The tug Atlantic Larch is reportedly on scene, and the Venture Sea and CCGS Earl Grey appear to be on their way.There is a Good argument for the CCGS to be equipped for emergency towage. As the current multipurpose buoy tenders and light icebreakers reach the end of their useful lives, they should be replaced with an off-the-shelf ice-classed Anchor handling Supply tug design. Such vessels are equipped for towing operations and feature large working decks for cargo transport. A suitable crane could be provisioned for buoy work. this would add to the Coast Guard’s capability, and preserve the existing service levels. 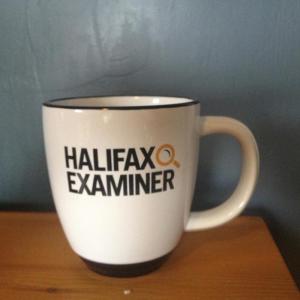