You are here: Home / Featured / Thanks to Taff Cheeseman, South Shore Regional Hospital will likely soon get a cuddle bed 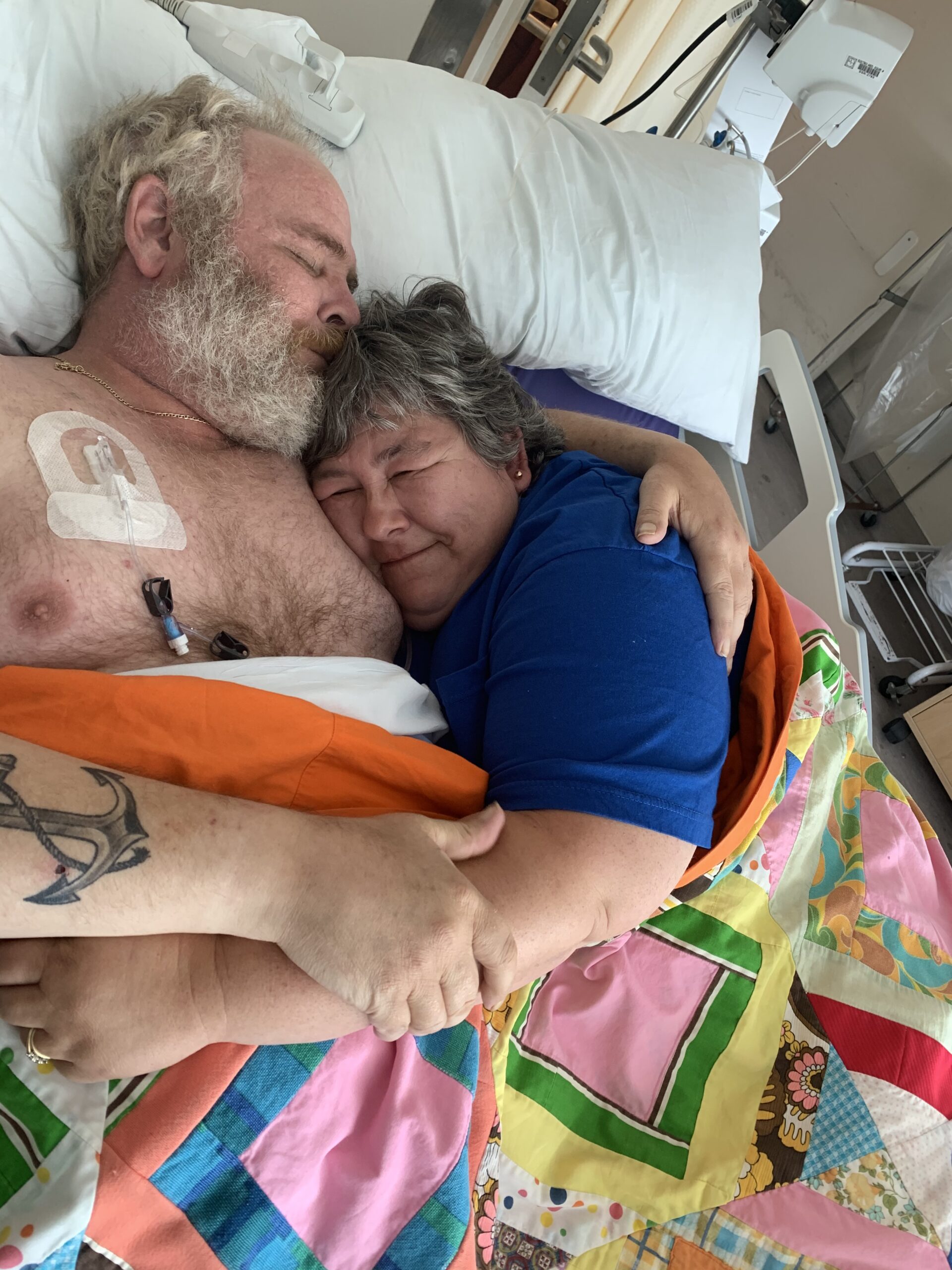 A South Shore woman’s fundraising campaign to honour her late husband has reached its $22,050 goal just one week after an emotional photo of the pair went viral.

Now, Taff Cheeseman hopes to expand the campaign to other hospitals.

Last Wednesday, Cheeseman shared the story of her determination to raise funds for a palliative care bed — also dubbed a cuddle bed — for Bridgewater’s South Shore Regional Hospital. These very large hospital beds are specially designed to allow a patient’s family to comfortably crawl into bed and even to sleep alongside them.

There are currently no such beds in any provincial palliative care units.

When her husband Rick was dying from cancer in August, Cheeseman desperately wanted to cuddle with him. He was in too much pain for that to happen in his regular hospital bed. About 10 days into what would be Rick’s final hospital stay, staff found a bariatric bed (used for larger patients).

It wasn’t as comfortable as a dedicated and much larger palliative care bed would’ve been, but it allowed the couple to be physically close for two weeks before he died. The moment she climbed into the bariatric bed with Rick for the first time was captured in an emotional photo taken by a hospital staff member.

That photo was shared on Facebook by the Health Services Foundation of the South Shore last Wednesday and quickly went viral.

“To be able to actually lay there with him was all I wanted. And he died in my arms,” Cheeseman said in an interview with the Halifax Examiner last week. “We were in the bariatric bed and I was able to hold him while he died. If people want that, they should be allowed to be given that opportunity.”

The desire to ensure other families had that same opportunity led her to create a fundraising campaign she called Cuddles From Rick. Last week, a former Bridgewater resident and anonymous donor moved by her story offered to price match donations up to $10,000.

On Wednesday, the Health Services Foundation of the South Shore announced the campaign had received $22,250 in donations for the cuddle bed.

“The support was extremely overwhelming. I’m still in shock, and it’s still not registering that it’s done because I don’t feel done,” Cheeseman said in an interview Wednesday night.

“I feel like I accomplished what I set out to accomplish, but I don’t feel like I’ve done enough. Now I’m thinking I need to do more.”

Cheeseman wants to continue to raise funds for other as-yet-undetermined projects at the South Shore Regional Hospital, and is still welcoming donations.

“This should be in every hospital, and it’s definitely something I am interested in doing but I haven’t ironed out the details,” Cheeseman said. “I thought I had lots of time to research that part, and it turns out I didn’t because this happened so fast.”

Cheeseman said she wanted to express her gratitude to everyone who has donated and supported the initiative so far.

“I couldn’t have done this without everyone’s help and I am very grateful,” she said.

Alison Clements, development officer with the Health Services Foundation of the South Shore, said it was “stunning” to watch how quickly the funding came together for the cuddle bed initiative. She has been working with Cheeseman, the foundation’s board, and the South Shore Regional Hospital’s palliative care department behind the scenes since September.

She described raising the full amount for the cuddle bed in under two weeks as “phenomenal.”

“The response to the Cuddles From Rick campaign was a beautiful whirlwind of kindness and compassion for Taff and her family. That heartbreakingly beautiful photo she shared of her first cuddle with her husband Rick struck a chord with literally thousands of people,” Clements said in an email.

The Health Services Foundation received donations from throughout the South Shore, across Canada, and even the United Kingdom.

“We all know that one day we are going to be faced with losing a loved one,” Clements said.

“I think the idea of being able to support a concept as simple as purchasing a large, specialized bed to allow families those final intimate moments warmed a lot of people’s hearts, which usually leads people to give.”

Clements said the palliative care department at South Shore Regional Hospital will submit a request to purchase the cuddle bed to Nova Scotia Health, adding the Health Services Foundation will sign as well to acknowledge they have the funds to cover the cost.

“Nova Scotia Health handles the procurement of the cuddle bed with vendors. Once the order is placed, I have heard of cuddle beds arriving as soon as eight weeks after,” Clements said.

“We do have to be realistic that we are in a global pandemic and the ebbs and flows of COVID-19 could delay this but all the pieces are in place to have the cuddle bed in place at South Shore Regional in early 2021.”