You are here: Home / Featured / Terrible things are happening, but there’s a cat in the sky 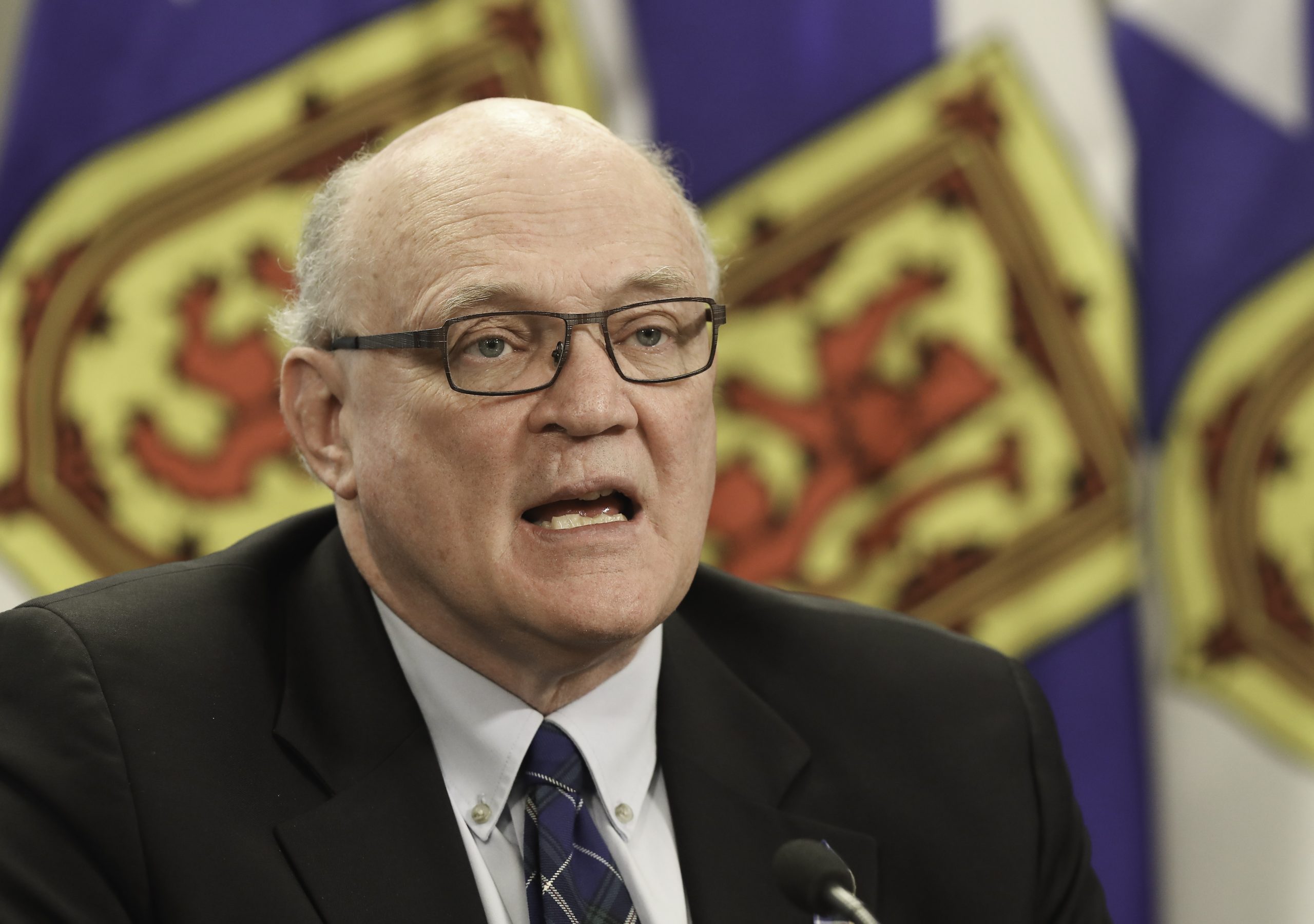 “Nova Scotia hopes to start loosening up restrictions in place around COVID-19 at the end of May, including allowing ‘non-essential businesses’ and ‘daycare and education settings’ to open and ‘non-urgent health care services to resume,’ according to a private presentation given by the province’s chief medical officer of health this week,” reports Zane Woodford:

The Halifax Examiner has obtained the slides from the presentation Dr. Robert Strang gave to the Halifax Chamber of Commerce and the Nova Scotia Business & Labour Economic Coalition, set up to help plan the recovery of the province’s economy. News website allNovaScotia.ca first reported on the presentation Wednesday night.

The 17-page slide deck outlines the province’s five-phase plan to reopen, based on an ongoing risk assessment. 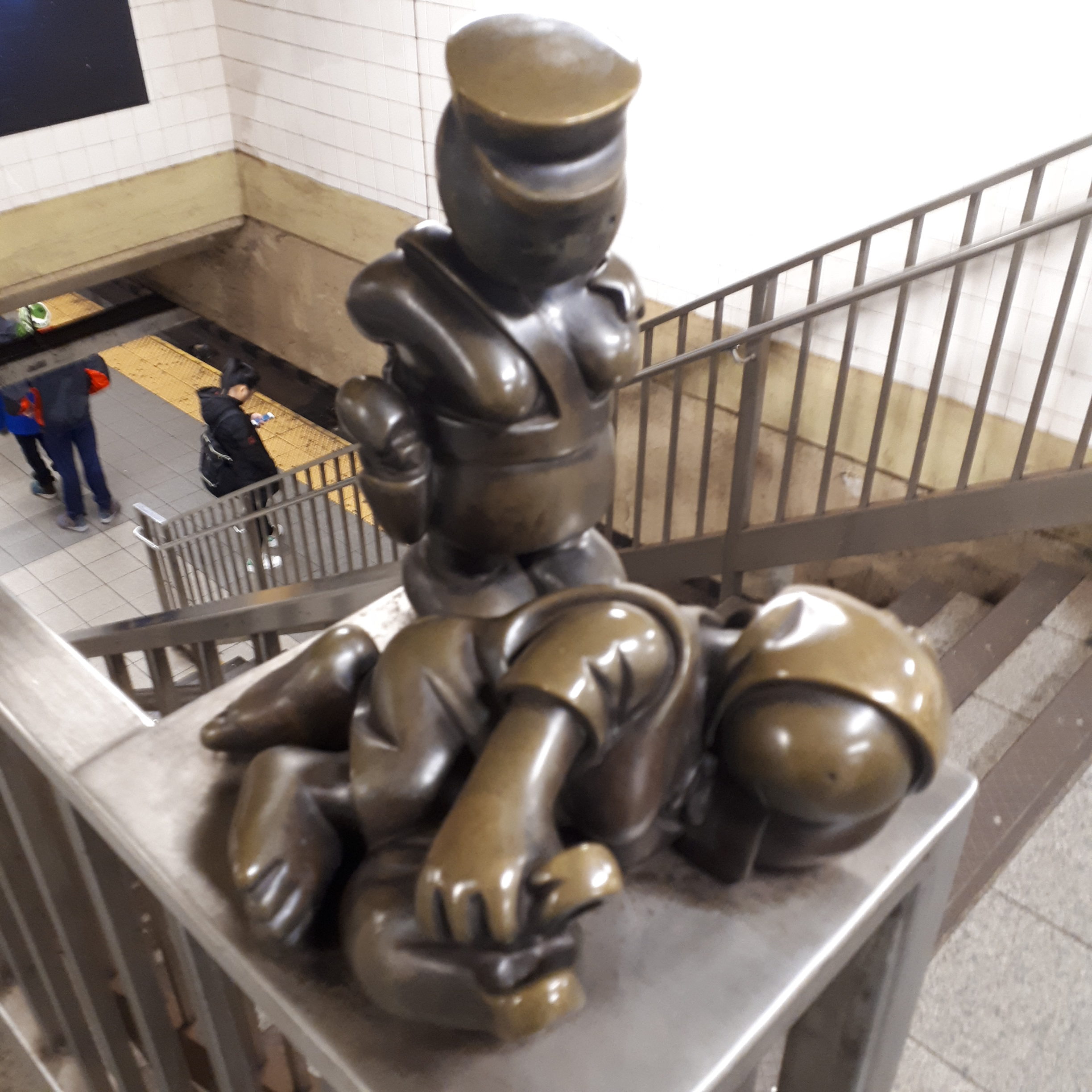 “We all know — because we’ve been told over and over again — that the purpose of the [COVID] lockdown was to ‘flatten the curve,’ so our health care system wouldn’t buckle under the surge of serious cases and lead to a horrific spectacle of triage deaths,” writes Linda Pannozzo:

We had to pull together and “stay the blazes home” to avoid overwhelming the health care system. But by all accounts, it had already been overwhelmed for years, a result of the incremental shift towards fiscal restraint on the part of governments…

It’s no coincidence that the “heroes on Northwood’s pandemic-relief team” don’t earn a living wage, or that because health care funding has barely budged for years, the public must shoulder the responsibility of keeping us safe, or that a growing swath of Canadian society is vulnerable to succumbing to the disease.

What the need for extreme measures has exposed is that decades of austerity have left us not only ill-equipped, but much more vulnerable.

Click here to read “Double Exposure: The pandemic has pushed back the curtain on how decades of austerity have left Canadians and the health care system more vulnerable.” 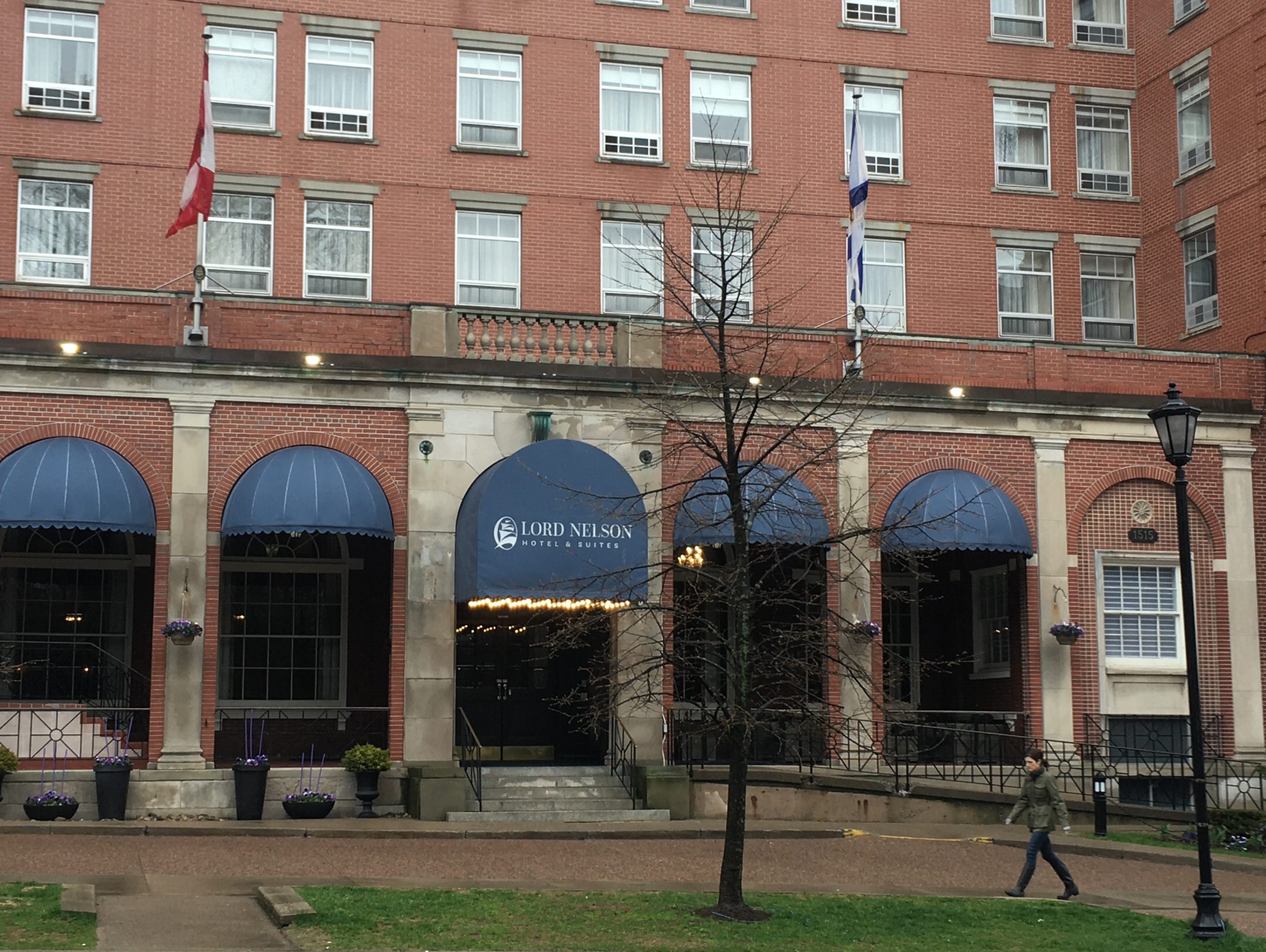 The Lord Nelson is one of three Halifax hotels being used to house the formerly homeless. Photo: Halifax Examiner

“The provincial government has stopped paying for hotel rooms for dozens of people who were moved out of a temporary homeless shelter last month following a confirmed case of COVID-19,” reports Zane Woodford. “And while federal funding is now covering the bill, the local association tasked with doling it out says the money will only last till the end of June.” 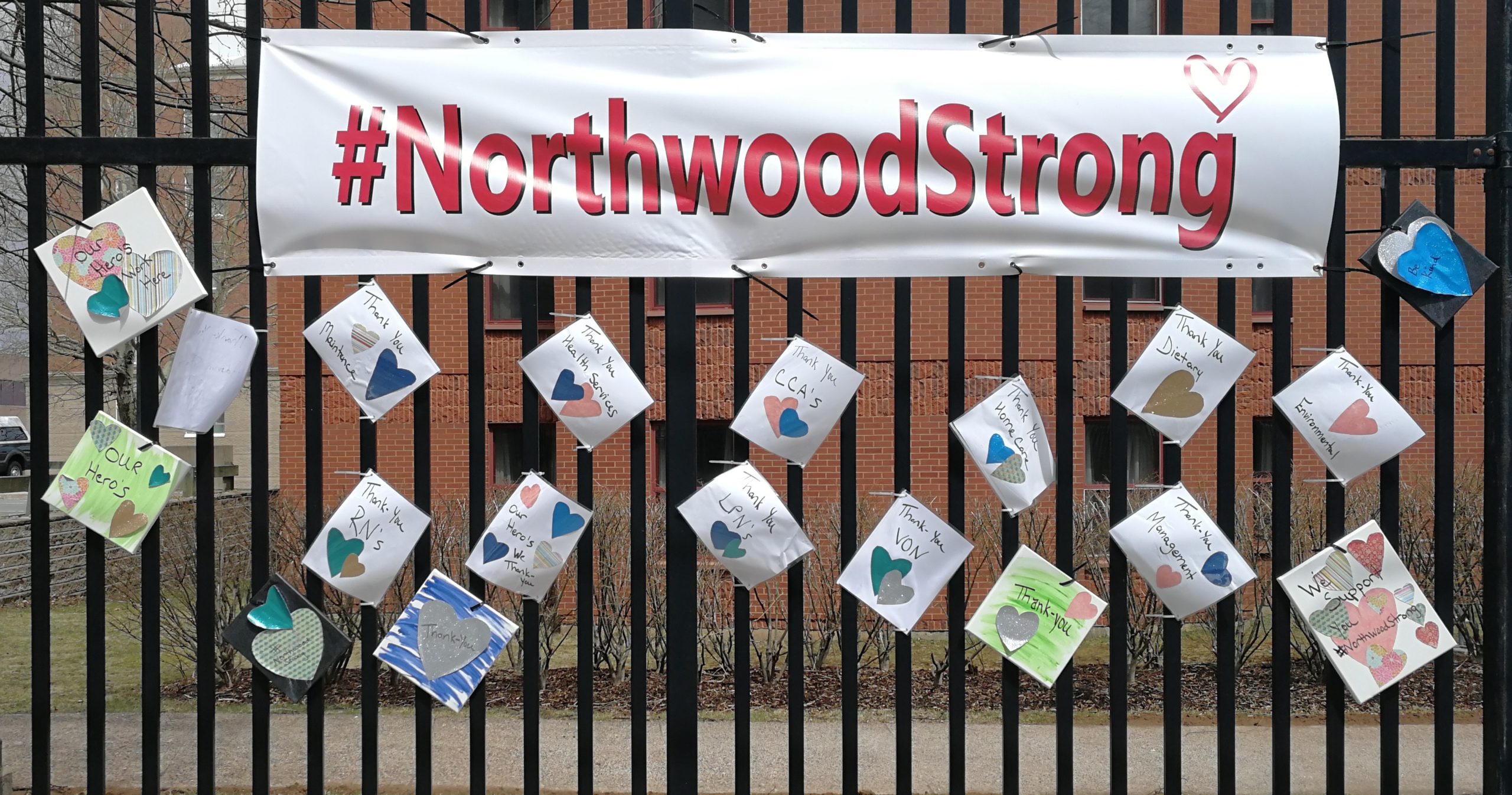 Signs of appreciation for frontline workers are attached to the fence outside the Northwood seniors’ complex in Halifax on April 22, 2020. Photo: Erica Butler..

“Nova Scotians who work in nursing homes, publicly-funded home-care, hospitals, and ambulances will receive a one-time lump sum of $2,000 this July in recognition of their efforts during the pandemic,” reports Jennifer Henderson:

The news was announced by Prime Minister Justin Trudeau yesterday. A news release from the province of Nova Scotia says 43,000 people will be eligible to receive it.

The Canadian Union of Public Employees (CUPE) represents about 4800 workers — including cleaners, dietary workers, continuing care assistants, recreation therapists, and licensed practical nurses — at 49 nursing homes in Nova Scotia. Louise Riley heads up CUPE’s Long-Term Care Committee. Riley is pleased with the recognition for essential workers who generally earn $17-$19 an hour. But she said it would mean more if this temporary raise was permanent. Riley said an extra $2 an hour would reduce turnover at nursing homes and allow people to stop working two jobs.

“We would like to see this — not just for this incident — but a living wage every day,” said Riley. “If you can do it in a pandemic, you should be able to do it all the time. Make it a meaningful change.” 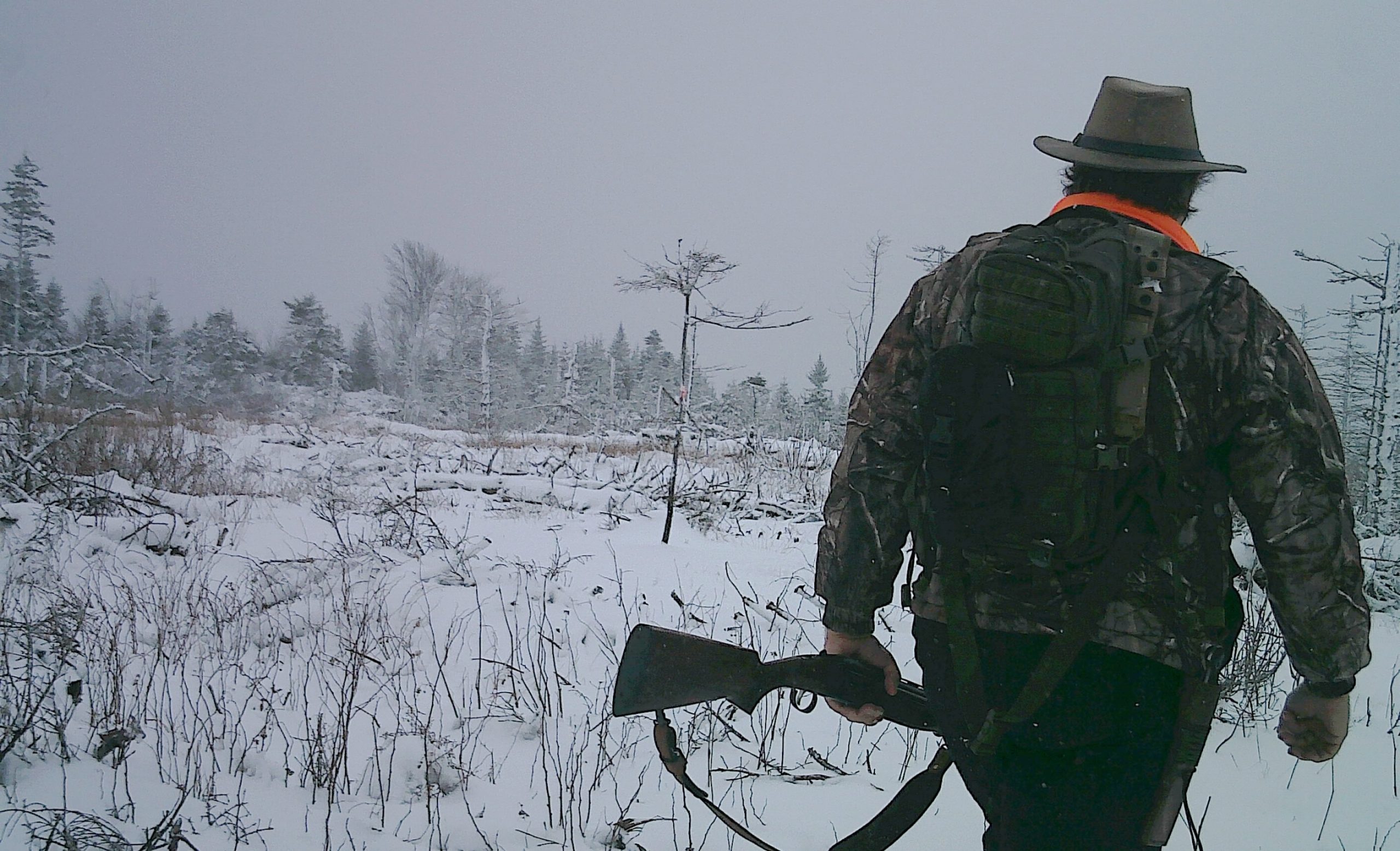 “The ban on assault style weapons comes in the wake of the Nova Scotia shootings, but it is just one cautious step in a decades-long debate over gun control,” writes Joan Baxter. 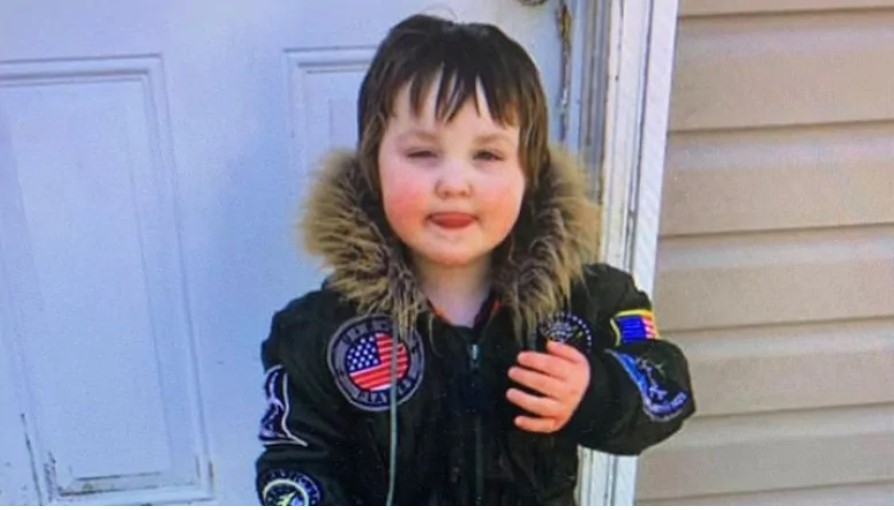 “The search for a missing three-year-old Nova Scotia boy who was last seen near his grandmother’s house in the town of Truro on Wednesday is now a recovery operation,” reports the CBC:

In a news release on Thursday, the Truro Police Service said “extensive efforts” to find Dylan Ehler “have not yielded any new clues or information.”

The Atlantic Journalism Awards 2019 winners were announced just as we were going to publication. Three Examiner writers are named:

El Jones wins the gold in the Commentary category for “In praise of First Girls.” In the same category, Stephen Kimber wins a silver award for “Coming to terms with the complicated legacy of Gerald Regan.”

In the Excellence in Digital Journalism: Enterprise/Longform category, Linda Pannozzo wins a silver award for “The Archaeology of Loss.”

Congratulations to El, Stephen, and Linda, and to all the other winners!

Stephen Archibald is still interrogating spring, which for Stephen means warding off critters. He writes:

[O]ur relationship with the animal kingdom has become irritating and heartbreaking.

On the low end of the scale are attempts by starlings to nest in cavities in our house. We realized they had discovered some weakness in a fascia board and were arriving with nesting material. I leaned out a third story window and hung one of our scare cats on a nearby drain pipe and waved a rag tied to a broom handle whenever they were sighted. To everyone’s surprise this may actually have worked! Later saw the starlings investigating the dryer vent. 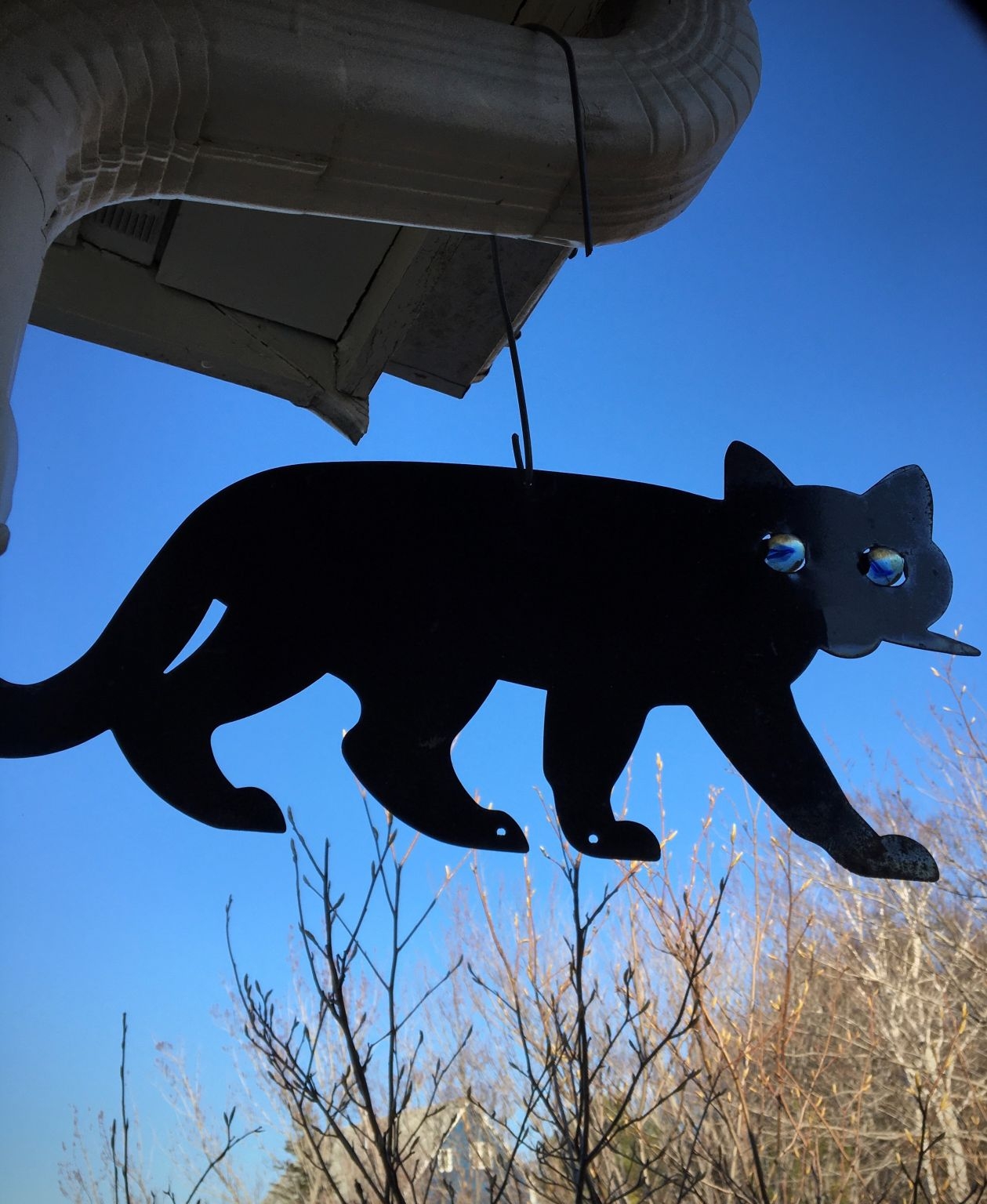 The real life-changing attacks come from deer. When we moved here, 25 years ago, there were no deer. As they began to appear we made various accommodations: no tulips, expect the hostas to be cleaned up at the end of summer. This year there has been a real explosion and they are eating plants, like large-leafed rhododendrons, that had not been on their menu before. There is now daily vandalism by a herd that is larger than I can count at once, 10 or so. Almost worse than their eating are the trampled flowerbeds. Looks like a dozen devils had a dance around the blue poppies.

The other day I made a cardboard guard dog with a glass eye. I’m not sure why I was compelled to do this, perhaps the need to create some sort of a talisman. As I work in the garden I’m aware of it swiveling in the wind. Of course the deer don’t understand or care. 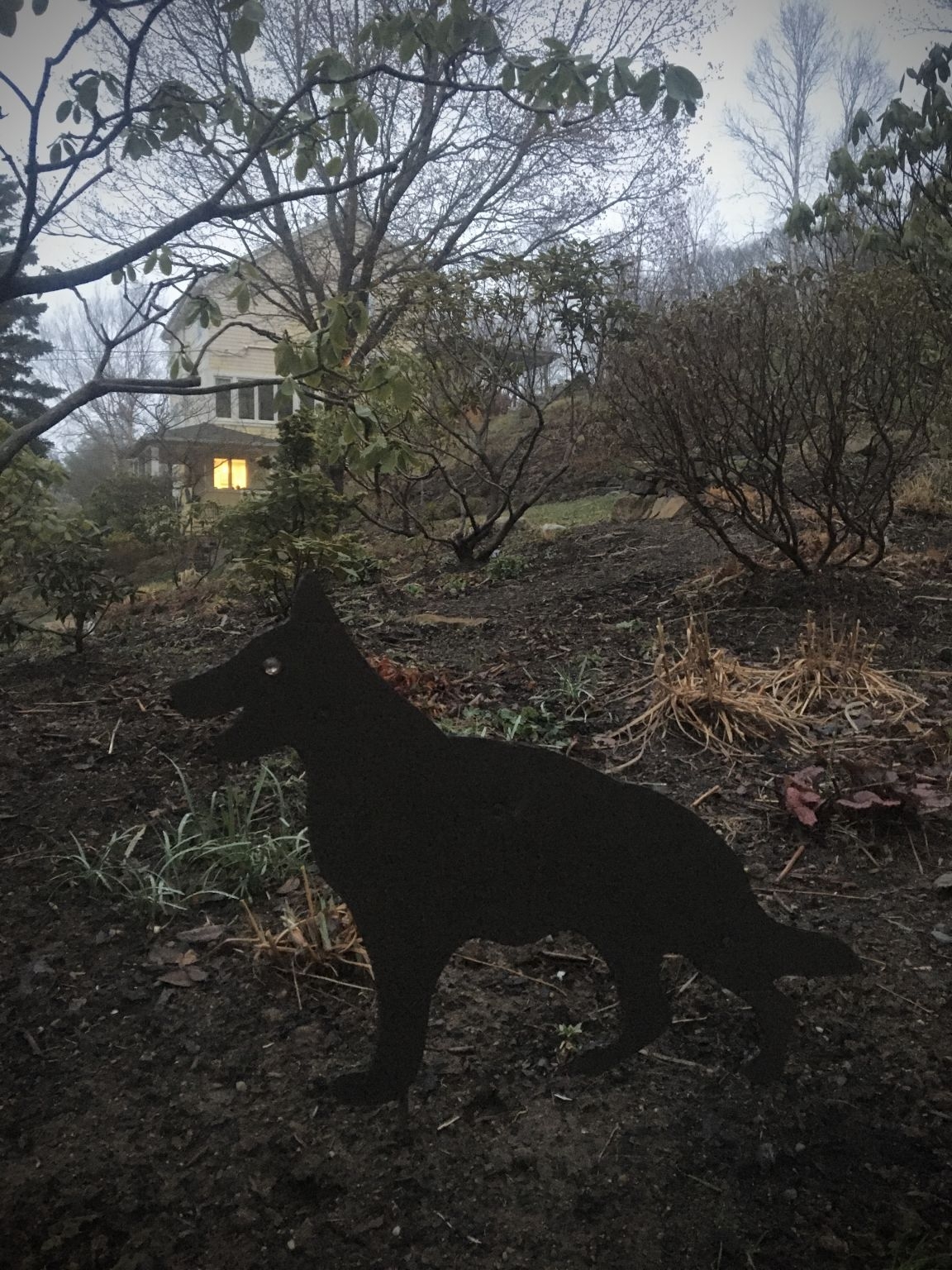 The number of souls in this province being usually reckoned just short of a million, of these I calculate there may be about one hundred thirty thousand individuals, or about 13.7% of the population, who are senior citizens; from which number I subtract thirty thousand individuals or couples, who are able to maintain themselves on RSPs or OAS (although I apprehend there cannot be so many under the present distresses of the kingdom) but this being granted, there will remain a hundred thousand seniors. I again subtract fifty thousand, for those who are expected to expire from non-covid causes or accidents within the year. There only remain fifty thousand seniors left to account for. The question therefore is, How this number shall be provided for? For we can neither employ them in commerce or agriculture; they can’t build convention centres nor stadia, nor cultivate land: they can very seldom pick up a livelihood by stealing as they are over sixty years old; except where they are of cunning parts, who capitalize on their age to avoid detection. I have been informed by a principal gentleman in the HRM, who protested to me, that he knows of several such persons over the age of sixty.

I do therefore humbly offer it to publick consideration, that of fifty thousand seniors, already computed, thirty may be reserved for sentimental reasons, should their family connections merit some type of exemplary status. The proposal is this, that the remaining twenty thousand may, at 55-60 years old, and once infected, be offered in sale (or rent) to the pharmaceutical scientists throughout the kingdom, always advising the homecare facility to let them eat plentifully of jello in the month prior, so as to render them as healthy as possible for a good test case.

I have reckoned upon a medium, that a senior could serve to test various vaccines and experimental ventilator models for possibly 1-2 months, depending on their health at the time of surrender. I grant this donation will be somewhat dear, and therefore very proper for the province, that has already supported these folks to minimum standards, should have first dibs at a vaccine or other form of patent that may arise.

I have already computed the charge of a senior during this period of testing, to be about $75 per day, housecoats and slippers included; the usual cost per day of the current care system is $109 per day, but subjects used for experimentation are less likely to require social stimulus or programming. With an overall population of about 1 million in the Province, less the contributions of children and the non-productive, I believe no citizen would repine to give a few dollars per day for the support of test subjects while significantly saving money when compared to what is paid now for long-term care.

Click here to read “A Modest Proposal for preventing the elderly of Nova Scotia from being a burden on their children or province, and for swiftly making them beneficial to the publick.”

I didn’t feel like opining today. Mostly that’s because I have a ton of other stuff on my mind and I’m behind on everything, so need to get a-working on non-Morning File stuff pronto.

But I can check out for a single morning because I’m incredibly fortunate to find myself (virtually) amidst the wonderful group that comprise the Examiner. Each of them brings something unique and worthy to the project, and I value them more than words (or, frankly, money) can express. Thanks to Iris, Joan, Linda, El, Stephen, Phil, Suzanne, Erica, Zane, Yvette, Evelyn, and others still, more freelancers and the people who work behind the scenes in ways too numerous to mention. You make it possible.

I have a white board in my home office where I keep track of all the unpublished articles in the works. Right now there are 17.