You are here: Home / Featured / Teaching the truth about institutionalization 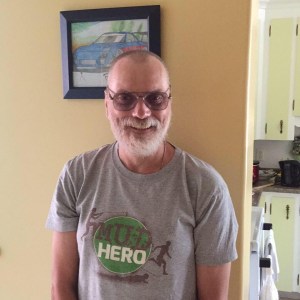 Simon Snyder attended the Nova Scotia Youth Training Centre in the 1970s from the time he was 10 until he was 17. He recalls some of the abuse that happened at the school in a new project. Photo: Contributed.

That’s how Simon Snyder describes the time he spent at the Nova Scotia Youth Training Centre in Bible Hill. Snyder first went to the centre when he was 10 and spent seven years there, only heading home to his family in Guysborough County for holidays and the summer months.

Snyder says the teaching at the centre was “a little bit of everything and a whole lot of nothing.”

But he does remember the abuse. He says there were a lot of rules at the centre. And breaking those rules meant you got the strap. He still remembers getting the strap and every detail of the strap itself. It was made from leather and was about an inch thick, three inches wide, and about a foot and a half long. He remembers one evening when his young roommate took off his shirt before heading to bed. Snyder could see from the young boy’s shoulders down to his bottom was covered in red welts from that strap.

“He was laying there crying, so he had to turn on his belly,” Snyder says. “I remember seeing that and I never want to see anything like that again.”

Snyder’s parents back in Guysborough didn’t have a phone, but he made weekly calls to his sister, Margaret Catherine, who lived in Antigonish. Snyder now has her name tattooed within a red heart on his forearm.

One day during a summer break back home at Guysborough, Sndyer told his father he wasn’t going back to the centre.

For decades, Snyder never said a word about the centre and what happened there. After leaving when he was 17, he spent time at home helping his father, a fisherman, on his boat, or with odd jobs, and painting the family home.

But now Snyder is opening up about his time at the centre, including to an 18-year-old student named Lauren Petrie from Sydney, Cape Breton. The pair met through a project called Truths of Institutionalization: Past and Present.

After decades of silence, Snyder wants others to know what really happened in places like the Nova Scotia Youth Training Centre.

“I told her so young people can really learn what happened at those schools,” he says. “It was hard to talk about but it needs to be done.” 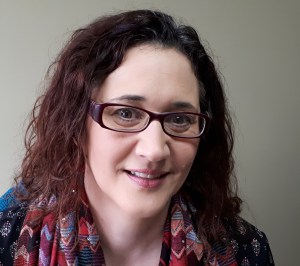 Patricia Neves is the executive director with Inclusion Nova Scotia, one of the partners with the project, which works to support people with intellectual disabilities and their families, and help them live full and inclusive lives in the community.

“They called them children’s training centres, but the level of education they were being provided, people wouldn’t be able to contribute to society, they wouldn’t be able to live independently,” Neves says. “They’re all amazing people and assumptions were made about them and they weren’t given the opportunity.”

The Truth of Institutionalization project includes a curriculum with six modules designed for students in Grade 10, but are also appropriate for anyone researching the topic. The modules cover topics, including the history of institutionalization, the de-institutional movement, and present-day institutions in Ontario,  Manitoba, and Nova Scotia.

The curriculum also includes 30 video segments in which students will hear stories from survivors of these institutions. The segment in which young students across Canada, some of whom Neves says have disabilities themselves, interviewed survivors is the final component of the project, which will officially launch this summer.

There were 15 survivors who took part in the interviewing portion of the project, including five from Nova Scotia. The other stories came from survivors in Ontario and Manitoba. Neves says the idea of the interviews with survivors and writing campaign came about after teaching headed online.

“It’s the most recent piece and I find it the most fascinating piece,” Neves says.

Neves each interview included a support person for the survivor who was telling their story, but she says at one point during their interview, she had to step in because Petrie was in tears.

“This is Simon’s life, ” Neves says. “Simon has known his story forever; Lauren was hearing it for the  first time,” Neves says. 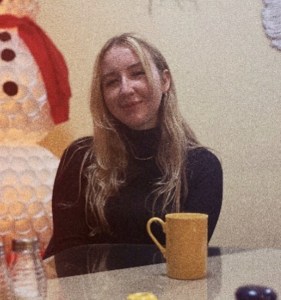 Petrie, who just graduated from Riverview Rural High School in Coxheath this past June, heard about the project through Facebook postings from Inclusion Nova Scotia. She contacted Neves, who connected her with Snyder. Petrie says there “was a lot to take in” about Snyder’s story.

“It’s not something I am really familiar with,” Petrie says. “It was intense. As an 18-year-old, you never get the chance to hear first-hand the stuff that’s going on. There was a lot of dark stuff. He’s talking about his childhood and you could really think about what it would be like growing up in his shoes in that situation. He was really warm to talk with, actually. That’s something good I take with me.”

Petrie says she took a few days to reflect on their conversation and then got to writing. Her personal reflection including thoughts on what she learned, as well as what more needed to be done, including educating others on institutionalization.

“That’s what Simon wanted most of all,” Petrie says. “The whole point of doing this was so young people are educated on it. That’s his number one priority.”

Here’s an excerpt from the essay Petrie wrote:

A memorable moment in the interview was when Simon said he never told his parents about his experiences. He never wanted to let them know he was being mistreated and never disclosed to them what life was like inside the institution. These are decisions that no one should have to make, to withhold such a traumatic chapter of their lives from their loved ones, for their sake. I cannot imagine being a young person, entering the stage of your life that is meant to be spent growing and developing, inside a place like that. No matter your circumstances in life, childhood is not meant to be spent under such harsh control and mistreatment. It is a time to be nurtured, and it is a crime and shame upon our society that we allowed abuse to reach so far and wide across our country. There is a lot owed to the survivors of institutionalization, and the least we can do is educate ourselves on their experiences.

This project was a learning opportunity for Neves, too.

Snyder says the night after he told his story to Petrie he stayed up late watching sports, but he also was lying in bed thinking about that interview. He says a lot of people didn’t talk about what happened and his family didn’t even know about his experiences or the abuse that happened at the centre. It was just this last year he started telling his story. (In 2018, Tim Bousquet wrote about three men who said they were sexually abused when they were teenagers living at the training centre).

“Mom and dad went to their grave not knowing what happened at that school,” Snyder says. “I wouldn’t talk about it.”

The students who will be learning these stories through the new curriculum will only be a few years younger than Petrie is now.

“I am hoping they can reflect on it and pay more attention to the topic in general and learn more about it,” Petrie says. “It’s disrespectful that it’s not talked about … It’s humbling to hear about. You think about how lucky you are.”

“I am really thankful to Patricia, the board of directors, the volunteers, and all the survivors for taking the time to speak with us. It’s something I’ll never forget. I’m really thankful I got to be a part of it.”

These days, Snyder, 61, now lives independently in his own apartment in Enfield. He serves on the board of directors of Inclusion Nova Scotia and is a member of People First Nova Scotia, an advocacy group for people with intellectual disabilities. He’s is also involved in a project called My Home My Rights, which is a group of researchers, including those with disabilities, who are studying human rights and want to develop tools to educate others on human rights. He’s also working on starting his own business. And he additionally wants to start a Facebook group where survivors of the Nova Scotia Youth Training Centre can connect and share stories. Neves says there are volunteers who are helping Snyder with that project.

On his downtime, he walks through his neighbourhood, visiting his niece who works at the hardware store near his apartment to “give her a hard time.”

As for next steps, Snyder has some ideas.

“An apology [from the province] would be good for starters,” Snyder says. “I think it’s very important for survivors like myself to get the stories out there instead of people working there telling a bunch of BS about what happened there.”