The government tabled its Education Reform Act (Bill 72) yesterday. You can read the text of the bill here, and the government’s press release about it here.

The Nova Scotia Teachers Union then issued the following release:

Following numerous compromises by the McNeil government, the NSTU will not pursue job action in response to legislation being introduced today.

“A college of teachers and a central department of evaluations would have created more unnecessary bureaucracy and would have drained resources from our schools. It is positive those ideas have been rejected,” says NSTU President Liette Doucet. “Similarly, a province-wide seniority list would place rural communities as (sic) risk, so we are pleased that concept is now being reconsidered.”

Doucet says the NSTU is still opposed to the legislation, which could do more harm than good to public education.

“The collegial model is badly damaged with the removal of administrators from our bargaining unit, and I fear this could bring more conflict to our schools. Similarly, I am genuinely fearful of the chaos that the elimination of English school boards will bring to the entire system. This approach has not served our health care system well,” she says.

Doucet wants to thank parents, students and community members for their overwhelming support in recent weeks. She says the powerful statement teachers made with their strike mandate helped raise awareness of the risks associated with the Glaze report.

“Teachers have been united in opposing changes outlined in the Glaze report, and their collective voice has begun to open the eyes and ears of government to the challenges our students are facing. We are well aware of the short-term impact a strike would have on families, and while the government has done enough to avert job action, they still have much more to do to improve our public education system. We will hold them accountable.”

At about the same time, Elwin LeRoux, the Superintendent of the Halifax Regional School Board, sent this message to parents:

Earlier today, the provincial government introduced legislation that will result in a number of changes to the administration and governance of the education system. I am reaching out to you to provide information on these changes.

In a nutshell, the changes are intended to streamline and focus the education system on student success, and ensure provincial education policies and programs are delivered equitably and consistently for all students, regardless of where they live or go to school.

These changes will shift resources from administration and governance into classrooms, and create a solid foundation for other improvements; most significantly, increased support for all students through a new model for inclusive education. The independent report of the Commission on Inclusive Education will be presented to government before the end of March.

The legislation, known the Education Reform Act, will result in the following changes:

• Your local school board offices and staff will remain, and be renamed Regional Education Centres. These centres will continue to make the same regional and local decisions (such as busing and snow days) that they do now.

• More resources will move from current board offices into classrooms.

• My title will change to Regional Executive Director of Education. My primary responsibility is to focus on student learning and achievement.

•You will also have access to an ombudsperson at the Ombudsman’s Office to resolve concerns or complaints about education.

•School Advisory Councils (SACs) will be supported to advance local priorities for their communities. We will be consulting SACs this spring on what supports are needed, funding, and how to ensure diversity in membership.

• The quality of teaching is the most significant contributor to student achievement. Government will work with teachers and the Nova Scotia Teachers Union on teaching and leadership standards.

• Government will work with parents, teachers and the Nova Scotia Teachers Union on ways to more effectively support extracurricular activities in schools and other strategies including French language education, rural education, educational needs of new immigrants, students living in poverty, and children in care.

More information on the work to improve the education system is available at www.novascotia.ca/educationsystem .

Thank you for your support. I will continue to share information with you as it becomes known. Information will also be shared on our website (www.hrsb.ca), Twitter (@HRSB_Official), and through the Alert message system much like this message.

The government claims that closing the school boards will “save” $2.3 million annually, money which will then go back into the school system. I have my doubts about that.

The “concession” from the government is explained by Marieke Walsh:

School administrators will be moved from the main Nova Scotia Teachers Union (NSTU) bargaining unit to a newly-created Public School Administrators Association. This means principals and vice-principals will no longer be direct members of the teachers union but will maintain an affiliation at least until 2019.

I don’t really understand that, but I guess the broad outlines of the “deal,” such as it is, is that the union agreed to abolishing the school boards in return for the government agreeing to a one-year continuation of the union collecting dues from principals and vice-principals, withdrawing the college of teachers proposal, and not establishing a province-wide seniority list. With that, strike talk was over.

But were the compromise not enough to avoid a strike, the bill also imposes stiffer penalties for illegal strikes, from the existing $10,000 to $100,000. The government says this isn’t punitive but rather sets the fines at the same level as applies to other public employee unions. But come on: who’s kidding whom here?

It’s hard to see this as anything other than a big victory for the McNeil government. 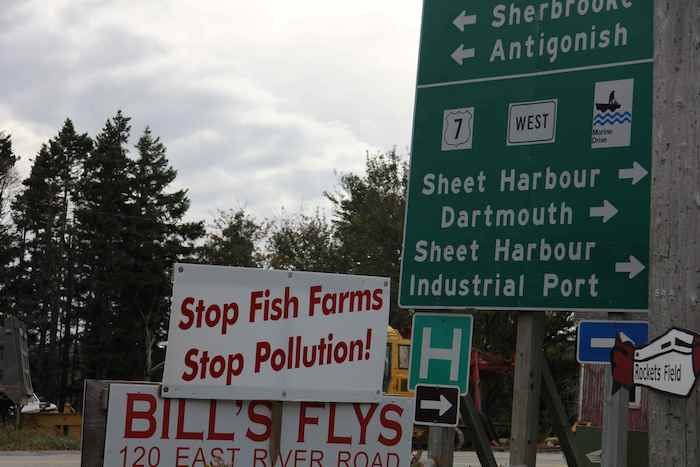 “About 600,000 salmon smolts had to be killed following an outbreak in February of infectious salmon anemia at two land-based fish farms in Nova Scotia,” reports Richard Woodbury for the CBC:

Aquaculture Minister Keith Colwell said Thursday the two facilities are located close to each other, but wouldn’t name them.

“The virus is just in one location and they move fish from one facility to the other,” he said.

Colwell said the loss amounted to almost all of one company’s fish stock, but wasn’t as significant for the second.

He said there aren’t any health concerns for humans as the virus only affects salmon.

Colwell said it’s unusual to have this kind of outbreak on land-based facilities.

I don’t know why the secrecy. Maybe readers can chime in, but isn’t the advantage of land-based fish farms: if something goes wrong, the damage can be contained? 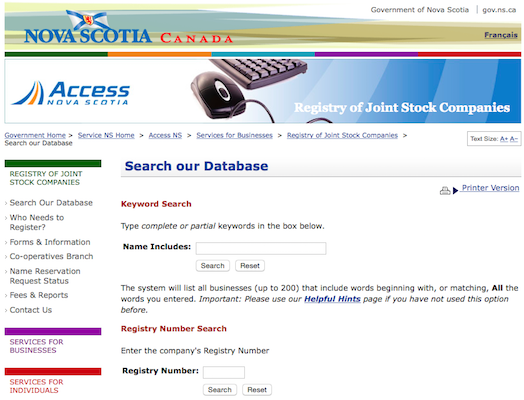 Yesterday, the province announced a $7.1 million contract with Enterprise Registry Solutions Ltd. (ERS) of Dublin, Ireland to revamp the Registry of Joint Stock Companies. ERS runs the registry in Saskatchewan, where the province charges up to $15 for a search.

I wrote about my worries concerning fees to search the registry back in 2015. But, reports Jacob Boon:

Provincial spokesperson Marla MacInnis says, for now, there are no plans to implement a similar fee structure with Nova Scotia’s registry.

“At this time, no fee changes for searching and obtaining copies of documents are anticipated,” writes MacInnis in an email to The Coast.

All businesses in Nova Scotia are required to register with joint stocks. It’s where journalists, researchers, lawyers, business folk and any curious member of the public can find out the names of those running every local, extra-provincial and numbered company at work in the province. 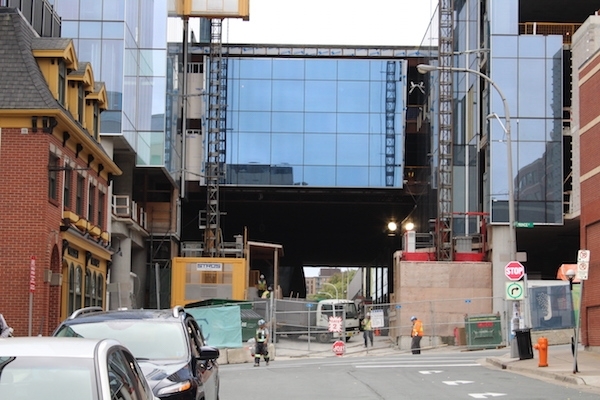 Roger Taylor has his usual cheerleading for all things Nova Centre, with a kind of nothing burger about BMO moving its offices to the new complex:

BMO’s Halifax headquarters has more than 200 employees occupying two floors or 36,000 square feet. There is also a 4,200-square-foot retail branch located on the ground floor of the complex.

The sheer number of windows at the new office allows the maximum amount of natural light available to come in and, to [Jamie Loughery, senior vice-president at BMO], it seems to energize the BMO workforce.

Yeah, I bet BMO employees are just falling over themselves with glee.

Anyway, I wanted to know more about — which is to say, anything about — lease prices. What’s BMO paying for that energetic workspace? I suspect nothing:

The deal between the province and Ramia’s Argyle Consolidated Inc. was signed in late April 2016, the same week that Argyle signed a loan agreement with Bank of Montreal — for $330 million. The loan was secured firstly by the lease for the convention centre, and then by future leases for the office and hotel towers. (The documents don’t say, but I wonder if BMO also got a discounted rental rate for moving its offices into the Nova Centre.)

And oh yes, the hotel operator that double-pinky promise is about to be announced but isn’t because the investor has to get a mani-pedi before coming to Halifax to make a big deal about it.

The peninsula of Halifax and surrounding mainland were once criss-crossed by stone walls. In this 1801 illustration [above] you can see that wall-lined fields separate the ladies and cattle on Fort Needham  from Brunswick Street (St. George’s Round Church) and the Citadel in the distance.

In old Halifax, many suburban roads were edged by long walls, like you see in this view down South Street from Queen [below], painted in 1841. A few years after this painting, houses were build on the land to the right. Stone from the walls could have been used in their foundations. 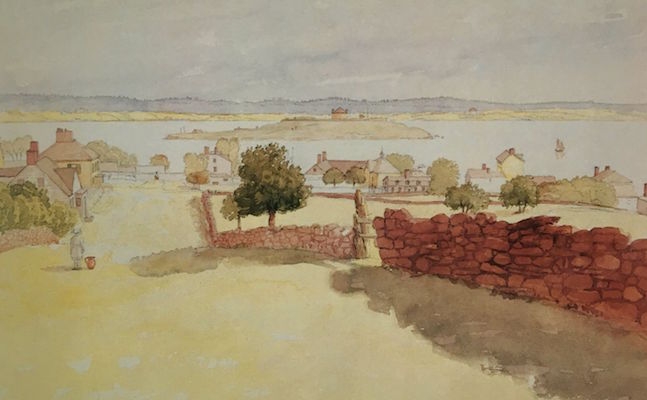 We recorded the Examineradio podcast yesterday, and it should be published today. Check back.