You are here: Home / Featured / Tastes From Home: free cookbook showcases recipes and stories from refugees who’ve resettled in Canada 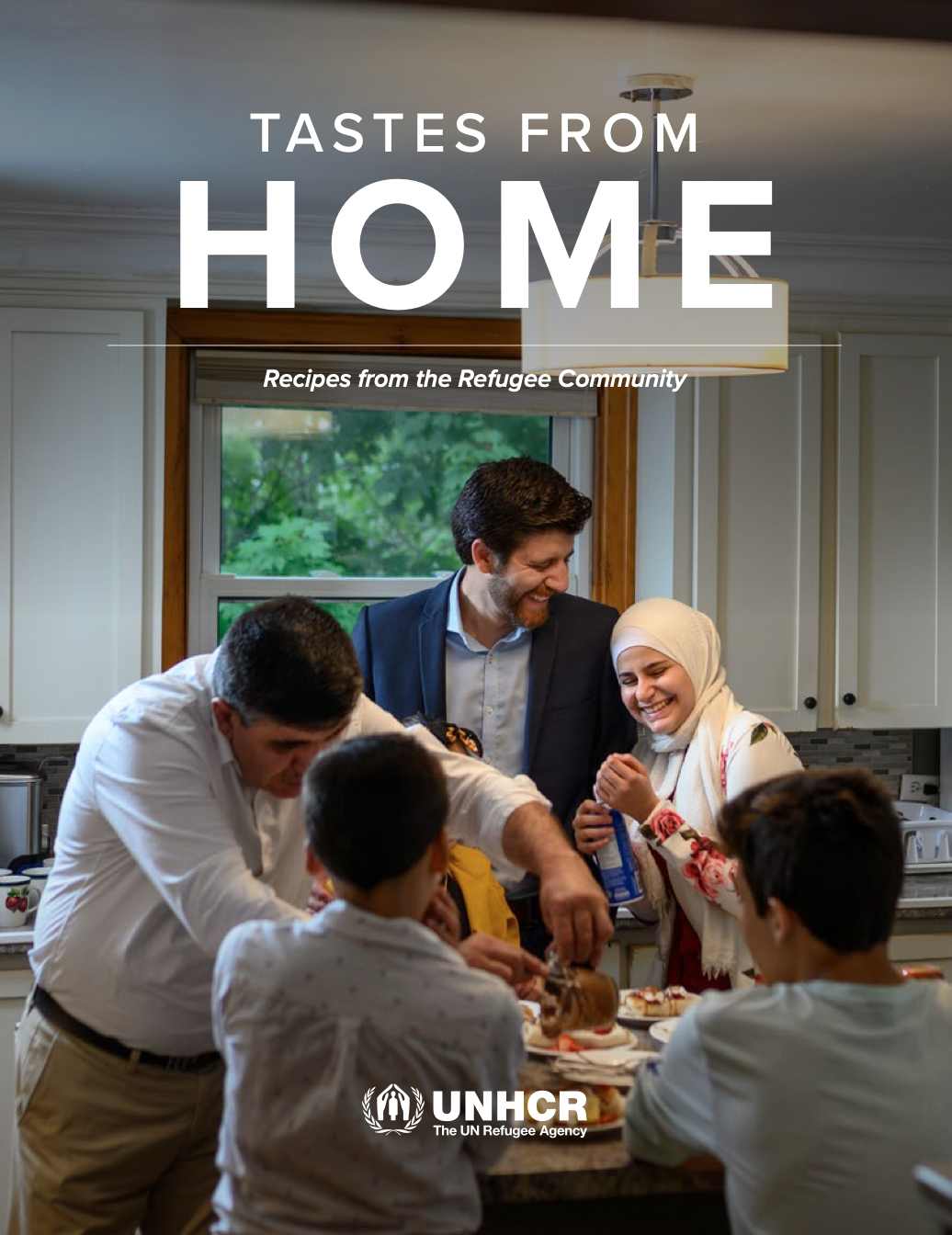 ‘Tastes from Home: Recipes from the Refugee Community’ is the first free cookbook ever offered by the United Nations High Commissioner for Refugees (UNHCR) Canada. It was created to commemorate UNHCR’s 70th anniversary.

For every download of the free cookbook, an anonymous supporter is donating money to UNHCR to help end food insecurity for refugee communities around the world.

Hadhad, a former Syrian refugee and founder and owner of Peace by Chocolate in Antigonish, N.S., said his family thought carefully about their recipe contributions when asked to participate. They wanted to ensure it would represent them, their culture, and reflect what made their hearts “dance in happiness.” 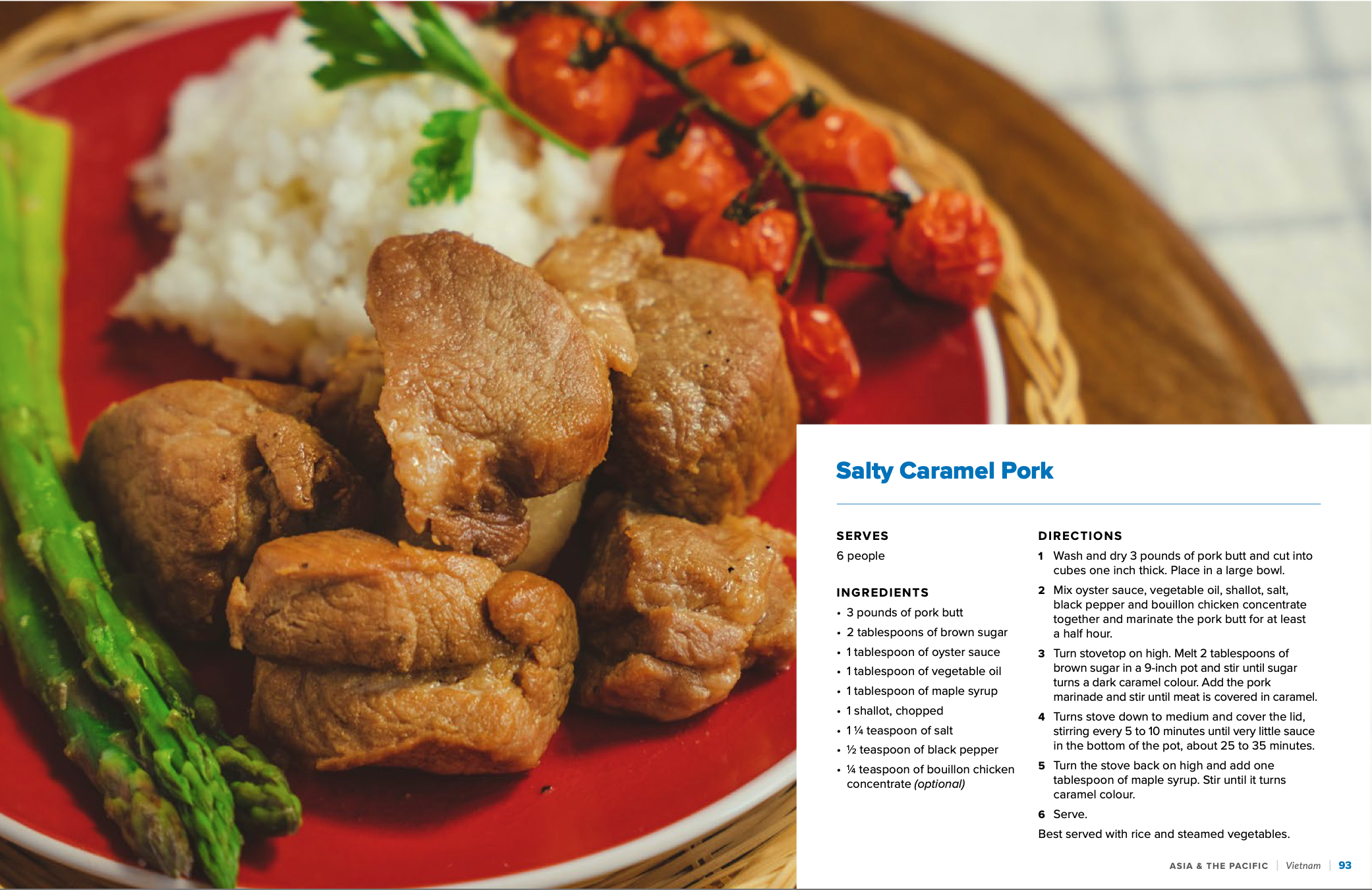 One of many recipes featured in the free cookbook. For every download of the free cookbook, an anonymous supporter is donating money to UNHCR to help end food insecurity for refugee communities around the world. Photo: ‘Tastes From Home: Recipes from the Refugee Community’

From Vietnamese salty caramel pork to Congolese spinach stew, Romanian stuffed peppers to a ground beef and potato dish from El Salvador, the 120-page cookbook features a wide variety of recipes Canadians are encouraged to try and share via social media using the hashtag #CookWithRefugees.

Hadhad shared two recipes, both of them desserts. Perhaps unsurprisingly, one of them — a chocolate wrap with strawberries, hazelnuts and caramel — uses his much-loved Peace By Chocolate.

The second is a pistachio dessert called Nightingale’s Nest, or ‘Ish El Bulbul.’ He said he has happy memories of living in Damascus sharing that particular dish with family to celebrate many joyous and momentous occasions.

“We used to make this with my grandmother on the first floor of our building, and I remember when we were little my cousins and myself and everyone from the neighbourhood, they would come,” he recalled.

“It has a lot of meaning in gathering and celebrating togetherness as a family…And we also wanted to introduce a fun way to make this lovely family activity in the house now during the holiday times, because, again, it’s all about sharing identity, sharing culture, and sharing happiness.”

The cookbook’s cover includes a happy kitchen scene in which only half of Hadhad’s face is facing the camera. That’s because the other half had just been covered in whipped cream by his sister, seen smiling broadly and holding the can.

“I turned my face and it was really, really an amazing moment full of joy. It does remind me of our time in Damascus, we used to gather around in the home kitchen just playing with all the fun ingredients and recipes,” he said, chuckling. “And the smell is just amazing. You cannot smell it from the picture, but you can see it.”

The bulk (11) of the 14 people whose recipes are featured in the cookbook live in Ontario, including former Governor General Adrienne Clarkson. In addition to Hadhad, stories and recipes were also shared by participants based in Montreal and Prince Rupert, B.C.

“I just assumed that with all the challenges that 2020 has introduced to the world, that people started forgetting that there are millions and millions of refugees living in refugee camps, suffering every day to get even one meal a day,” Hadhad said.

“I really hope Canadians will remember how, even during a pandemic, how blessed we are to live in a country where we don’t have to worry about these basics for our everyday lives.”

Hadhad said thousands of Canadians had already downloaded the cookbook. He’s encouraging others to get their free copy and try some of the recipes. His hope is that families will gather in kitchens across the country to explore new recipes from other cultures and make the holiday season “that much better.”

“Refugees come here with ideas, with skills, with talents, but mainly with culture. And this book is just reflecting one side of that culture, which is food,” Hadhad said.

“I hope Canadians will reflect on that, understand how blessed we are to be in a country that is so diverse and you see that through each page and each recipe and story and each tagline in this book.”