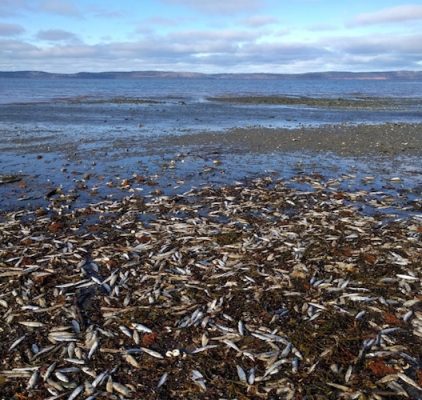 “‘Some sort of environmental event’ is the likely cause of the recent swath of herring mortalities that washed up along the shore of St. Mary’s Bay, provincial government representatives heard Jan. 19,” reports Chris Muise for the Yarmouth Vanguard:

“We certainly know what it isn’t,” says Alain Vézina, regional director of science with the DFO. “It’s not human-caused.”

Vézina told the committee, as well as a scrum of journalists after the meeting, that extensive tests done on the herring remains and the environment excludes any sort of man-made cause or any viral or bacterial pandemic of any sort.

“We have ruled out anything that would be caused by pollution, pesticides, or natural contaminants in the environment. We have ruled all that out,” says Vézina. “What’s left, really, is some sort of environmental event.”

We know that as a result of climate change, the entire Gulf of Maine is warming at a rate greater than any other body of water on the planet, causing dramatic and alarming changes in the fisheries. This is where we’re supposed to put in the disclaimer that “of course no single event like a fish kill can be directly attributed to global warming” (even though at least one oceanographer is telling us it is). But Vézina is implying that even if we could connect the St. Mary’s Bay fish kills to climate change, that’s not a human-caused phenomenon, but rather just some inexplicable “environmental event.” What are you going to do, eh?

Meanwhile, the haddock population in Nova Scotian waters is mysteriously exploding, also just some inexplainable event totally disconnected to all the other climate change-related changes to the other fisheries in the same waters. Reports Paul Withers for the CBC:

She estimates 264 million haddock were hatched there in 2013 and survived their first year, making it an “extraordinary” year-class.

“This 2013 year-class is five times higher than the next highest on record since 1985,” said Finley, who works at a Department of Fisheries and Oceans research facility in St. Andrews, N.B.

In December, a standoff between police and an knife-weilding man holed up in a Fairview tattoo shop was live-streamed by both the barricaded man and surrounding spectators on Facebook Live. Reporter Chris Lambie explores the ethical, policing, and legal issues raised by the new technology. 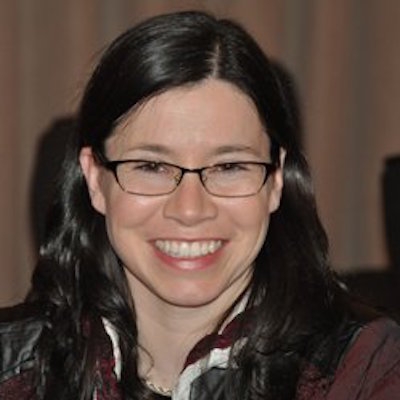 “You may have heard that the Spectator locked horns this week with Christina Lamey, whose LinkedIn profile describes her as a ‘Communications Advisor at Cape Breton Regional Municipality – Mayor’s Office,'” writes Mary Campbell in the Cape Breton Spectator (behind the Spectator’s paywall):

Robert Devet contacted Lamey to ask about her refusal to talk to Campbell:

In an email to the Nova Scotia Advocate Lamey writes, “I began by expressing that her approach is in bad faith. Mary’s writing usually contains commentary that is disdainful toward others in our community. I expressed to her that fairness and balance would be welcome. By her reaction, I don’t think we see eye-to-eye on that.”

Lamey also writes that the mayor is available after council meetings, events, etc. for questions. “Providing additional commentary or quotes for her blog is at our discretion.”

Criticizing a reporter’s work as a “blog” and “blogging” is an insult that was popular circa 2005 — it was stupid then, and even stupider now. Says Campbell:

OMG guys, I was just sitting here having a latte thinking about what to make for lunch and whether the color of my scarf makes me look bilious and then SQUEE!!!!!!!!!!!!! my cat did the most precious thing ever and it reminded me of my favorite Alannis Morrisette song…

Oh, sorry, started blogging there for a moment. Any minute now I will no doubt be disdainful of people in our community, people the mayor’s partisan political spokesperson has apparently sworn to protect.

This just isn’t a fight between a reporter and a PR hack. As Devet points out:

Much of this is related to Lamey’s position, which is unusual in the municipal context here in Nova Scotia.

The folks responsible for communication with the press in HRM and elsewhere tend to be municipal employees who are non-partisan about the issues at hand. But Lamey, a former communications director of the provincial  Progressive Conservative caucus, is a political appointee, handpicked by mayor Clarke after he was first elected in 2012.

And who, on Tuesday, after Robert Devet’s story about my communications problems appeared in the Nova Scotia Advocate, answered a question I’d asked the CBRM Public Works and Engineering Department? Christina Lamey. The question was about whether the plan for the second berth had taken rising sea levels due to climate change into account — it was not a question for the mayor, it was not a question to a councilor. And yet, it was answered by Lamey.

I’m happy to report that Halifax mayor Mike Savage’s PR person, Shaune MacKinlay, understands what her job is and has always conducted herself professionally. 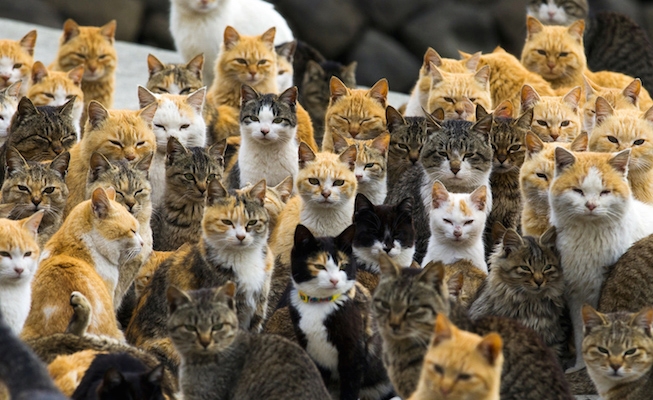 “Two Kings County women have pleaded not guilty to charges laid against them after 18 cats were removed from an abandoned home and property,” reports Ian Fairclough for Local Xpress:

[Jo-Anne Landsburg, the chief inspector for the Nova Scotia SPCA,] said it took three and half months to locate, trap and remove the 18 cats from the property. She said one window in the home on Old Farm Lane in New Minas was open and the cats would come and go, so it took longer to trap them because they were likely getting food elsewhere.

Landsburg said it took longer to search the home for the animals because of debris throughout the house, which she described as a hoarding situation that made it “incredibly difficult” to move around.

“They had to wear hazmat suits and respirators. They were literally climbing on top of piles of garbage and debris trying to find their way around,” she said.

“There was garbage, there was the smell of ammonia in there. When you go into these types of situations, you just never know what type of even human waste that you could come across as well.”

As I’ve said before, cat hoarding is a far more common problem than most people realize:

I know that many, maybe all, Halifax city councillors have had to deal with a resident hoarding cats. That was what was behind the proposed city cat bylaw: then-Dartmouth councillor Jim Smith had not one, but two such houses in his district. Neighbours complained, and who can blame them? Can you imagine living next to someone with 80 cats or whatever? The stink alone must have been unbearable. I quite enjoy it when a lone neighbourhood cat comes to visit. Two or three would be OK. But 50 of them?

I’ve always thought the ridicule heaped on city council for even debating the cat bylaw was unfair: it was a real issue brought forward by citizens who had had enough. This is what councillors are supposed to do — deal with issues affecting the lives of residents in their districts. And it proceeded sensibly. Staff brought forward what seemed like a workable proposal to limit the number of cats any resident could have and imposed a modest registration fee to pay for enforcement. The problem arose when staff costed out the price of establishing a cat shelter; when councillors saw the total bill, upwards of a million dollars, they changed their minds and rejected the bylaw and registration scheme. But again, this is what councillors are supposed to do: try to find solutions that benefit citizens, collect information, and make reasoned decisions, even if that means changing their minds because of new information.

Cat hoarding is considered a mental illness, and I worry that seemingly sensible, stable people are just a cat hair’s breadth away from falling into the abyss. Why, I once visited the apartment of a woman doing some work for me…. we were working on the computer in her den, and a cat came by. I forget the name of the creature, but she introduced it as her “cat,” singular. Some time later, another cat came by. That was her boyfriend’s “cat,” again singular. Then, a while later a third cat came by… I found an excuse to get out of there, fearful that by the end of my visit I’d be swimming in cats. She maintains that she and her boyfriend have “only” three cats (that’s like having “only” three psychotic episodes), but I dunno… I’ve seen the future, and it’s cats all the way down.

“Defence lawyers in Halifax say they’re constantly fighting to get items returned to clients long after they were seized by police, often because officers can no longer find them,” reports CTV:

Lawyer Kevin Burke says sometimes, getting the items back is more difficult than defending a client.

Burke says getting seized items back from police has been an issue for years. But he’s noticed things have been getting worse.

“It just takes forever,” he said. “In a lot of cases they can’t find the exhibits.”

Burke says he’s often hunting down things like small amounts of cash, cellphones and computers that may never have been used in a case.

This comes on the heels of an audit showing problems with the police evidence room, including lost and improperly tracked exhibits.

I’ve been expecting defence lawyers to start challenging every bit of evidence presented against their clients, demanding to see the chain of custody fully documented. But that doesn’t yet seem to have happened.

1. Walking with our sisters 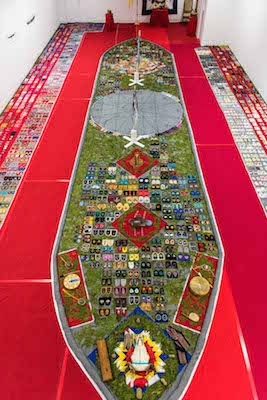 Alison DeLory discusses an exhibit at the MSVU Art Gallery.

Architecture Lecture (9am, Auditorium, Medjuck Architecture Building) — Roberta Feldman, from the Illinois Institute of Technology in Chicago, will speak.

Patient Advocacy (12:10pm, Room 104, Weldon Law Building) — Sharon Batt, from Georgetown University, will speak on “Patient Advocacy in the Drug Regulatory Process in Canada and the US.” 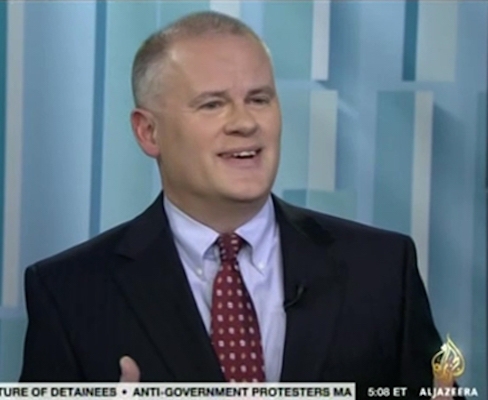 Stout wrote about “The Pond” here:

Sadly, most of the Pond’s 13-year history is lost. This obscurity was intentional. When the Pond was created in early 1942, the United States had very little experience with intelligence, and the notion of a spy agency which would be not only officially unacknowledged, but actually unknown, appealed to some people in Washington. These people were repelled by the larger-than-life publicity hound William Donovan and his “Oh So Social” intelligence agency. For a precedent they looked instead to foreign intelligence services such as the British MI-6, which they thought was more discreet and whose chief was never named in the press.

In accordance with this philosophy, the Pond spent most of its existence not as a government agency, but as a private sector organization, operating within real companies with names such as the Universal Service Corporation. This practice contributed substantially to obscurity and security. However, three successive government agencies found that having such an independent intelligence operation — and, worse yet, one run by a pugnacious, conspiratorial ideologue — was more trouble than it was worth, and the notion of having a truly secret intelligence organization never did catch on in the United States.

Art Battle (7:30pm, Great Hall, University Club) —  an art competition and auction. Students and Early Birds $10,; everyone else is 15 bucks at the door.

I’ve got a bunch of new material in the works. I’m really behind on everything, but hope to get some of it out today. And if I can get all the editing done over the weekend, we’ve got two investigative pieces coming out Monday.