I’m out of town (again) so this is going to be a short one.

1. Are Canadians Open to Voting for a White Skin Wearing White Man?

Most Canadians are open to voting for someone who wears white skin, a new poll finds. 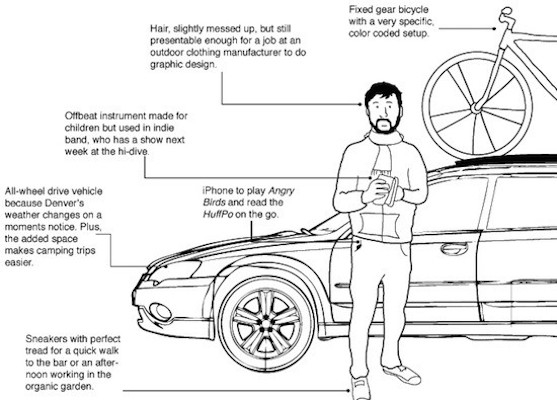 Some brown people wear turbans though, so that’s alarming. 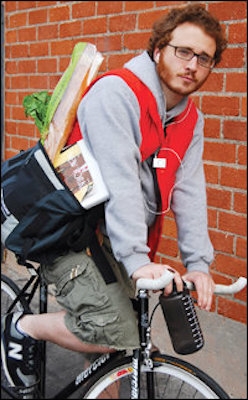 Respondents indicated that “some” or “most” of their family members were less likely to vote for a white man if he “seemed Jewish — they’re not really white, right?” or if he “has a coloured wife.”

Respondents will still invite these apparently racist family members over for Thanksgiving dinner and let them babysit the grandchildren.

The survey was taken after one brown man won a thing. The Prime Minister of Canada is still a practicing white man who followed his father’s footsteps into politics.

Respondents also noted that “hip hop is gang music,” that “Indians need to get off the welfare,” that “those foreigners smell funny,” that “if my daughter brought one of them home, I’d shoot him and lock her up,” that “we’re letting too many of them in these days, this is a white country and they don’t share our values,” that “I leave anonymous racist comments on websites,” that “they get to use that word, it’s racist that I can’t,” and that “I obsessively watch interracial porn, though,” revealing the shocking and surprising fact that a bunch of Canadians are super racist.

Respondents also claimed they “had a Sikh friend once,” “went to a multicultural festival,” “had a lovely African lady do diversity training at work,” “my child goes to nursery with a mulatto child,” “attended a Pow Wow by accident,” and that they “don’t care if someone is green, purple, or polka dotted as long as they don’t make white people feel uncomfortable.” 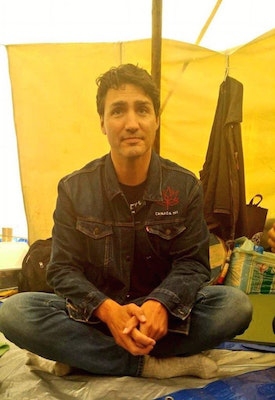 The head of the organization that conducted the poll told reporters, “Basically a lot of white people are really racist but if you call them racist they act like that’s worse than actually being racist, so it’s important to coddle them and take them seriously when they say things like ‘I’m not racist, I’m just concerned with the presence of religious symbols in public’ or ‘I would totally vote for a brown person, it’s just I think that other people might not.'”

Asked if they ever took a poll after white men got elected for stuff, and if the fact that never happened wasn’t racist in itself, he responded, “I just work here, man.”

The fact that Christian prayers are held before every session of the Nova Scotia legislature does not, of course, count as “religious symbols” being introduced into politics.

The poll also had some positive findings. A majority of respondents said that a candidate’s race and culture shouldn’t matter, only their policies should. “Oh?” said the survey. “So what you mean is, as long as a candidate maintains neoliberal policies that disadvantage everyone except rich white people, it doesn’t really matter who’s in charge?”

Asked if white people have race or culture or if that’s only a thing brown people have, while white people are considered “normal” and “universal,” respondents said…just kidding, of course the survey didn’t ask that.

However, many respondents indicated an affinity for mayonnaise, carrying around bags of dog poo into coffee shops, and statues celebrating genocide. 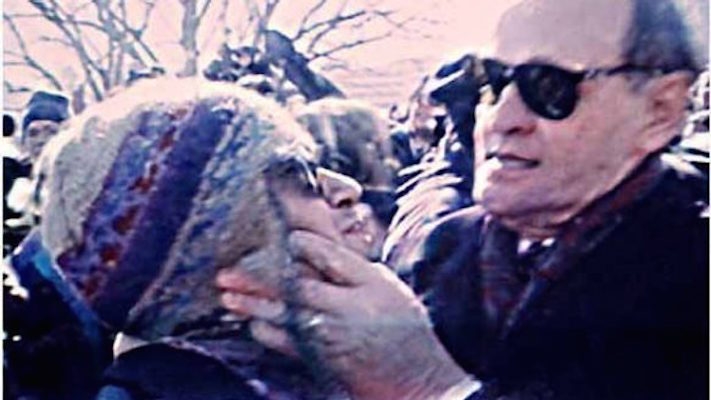 Respondents also said that “brown people are okay as long as they love racists who scream in their faces about Sharia law” and as long as they are “humble,” “articulate,” “grateful,” “hard working,” “not angry,” “clean,” “aren’t too dark of a shade,” and “don’t have an accent.”

One hundred per cent of respondents agreed with the statement, “if you’re white, you’re all right. If you’re yellow stay mellow. If you’re brown, stick around. If you’re black, get back.”

Wow, that picture seems really complicated. There’s all kinds of, like, words on there. I think I can make it easier to understand: 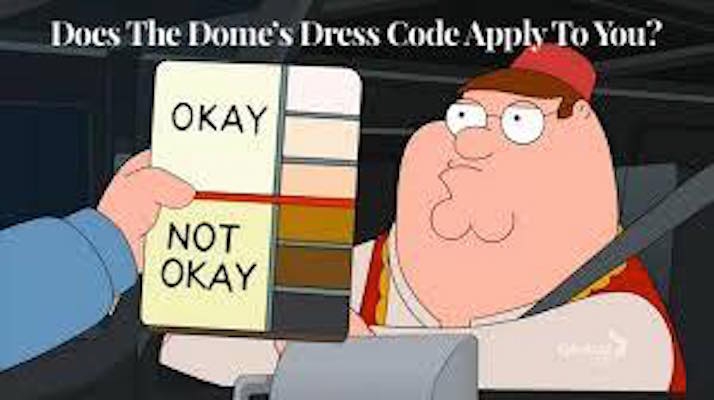 In comments on Facebook, The Dome claims that they “offered a recent survey to our current and past guests, and these were the key issues that need improvement to better their experience at our nightclub. We are acting on feedback we have received.”

I like to imagine that some person got the “would you vote for a Sikh in a turban” survey and then right after got a call from The Dome asking them how anti-Black they think the dress code should be.

It’s weird, though. From what I remember of going to The Dome, I would think clean bathrooms that don’t have pee and vomit all over the floor, not making people line up in the freezing cold to give the impression the club is really hot and exclusive when it’s literally the most basic bar in Halifax, not being a place where women are deliberately plied with alcohol to facilitate rape, and not handing out cheap drinks and then claiming you just didn’t see that huge brawl coming would be higher priorities than worrying about if someone’s shirt has sleeves or not, but of course, I don’t run a business so the fact that Black people’s money is actually worth less than white people’s money (that must be true, right?) doesn’t affect my bottom line. 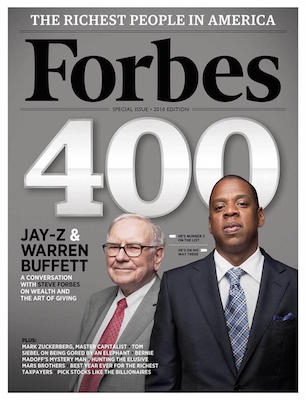 Oddly, nobody in the comments seems to have actually received this survey. But what would that feedback look like anyway? “I like going to the club to dance to Black music, but I don’t want any Black people there! Can you update your dress code to ensure that it’s subtly racist, and targets Black-coded clothing with just enough plausible deniability to allow white people to gaslight Black people when they talk about how racist the dress code is? Maybe you should add some Birkenstocks in there to facilitate that goal, please?”

And, seriously, past guests? You’re telling me people in their 50s or whatever who moved to Alberta made sure to comment on what colour sneakers some random wears to go drinking?

Also, apparently women aren’t allowed to wear underwear now. I guess that’s supposed to mean underwear as outer clothing, because remember, this is a classy night club now, not a mere bar.

So, The Dome has banned Dartmouth. pic.twitter.com/S5Gd3xy6ei 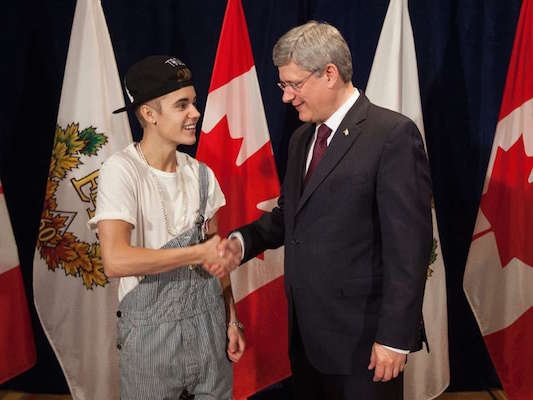 The Dome management also released this graphic to clarify what kind of money they accept. 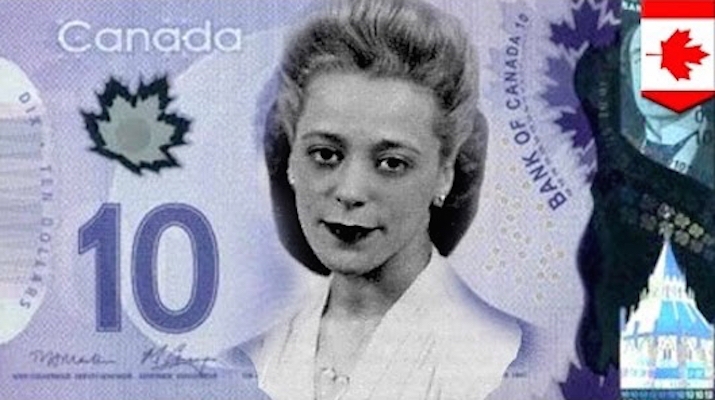 The police have yet again released the photos of women involved in petty shoplifting.

And the media again collaborate with the police in publicly humiliating women — particularly Black or Indigenous women — who commit small thefts. The media will regularly run these pictures, asking the public to identify some woman who stole something.

Meanwhile, an article about a police officer who commits a violent assault while making an arrest naturally is not accompanied by his picture. Apparently we don’t need to be able to identify violent police officers who might brutalize us, but women shoplifting are a threat to the community and their images must be splashed everywhere.

Oh, are you a construction company that kills workers? Don’t worry, no pictures of the bosses will accompany articles written about your negligence.

Are you a corporate polluter responsible for catastrophic oil spills into our oceans? Again, we wouldn’t dream of showing your photo.

No photos of landlords who criminally neglect properties and exploit low income residents, CEOs of corporations who hide money in offshore accounts, or bankers who illegally speculate with their investors’ money.

But if you steal goods worth a couple of hundred dollars, it’s vital that your image be splashed across our communities. We must, of course, know who the criminals are among us.

Thanks for reading! To help us continue to provide El Jones with this platform, please consider subscribing to the Examiner. Just $5 or $10 a month goes a long way. Or, consider making a one-time contribution via PayPal. Thanks much!