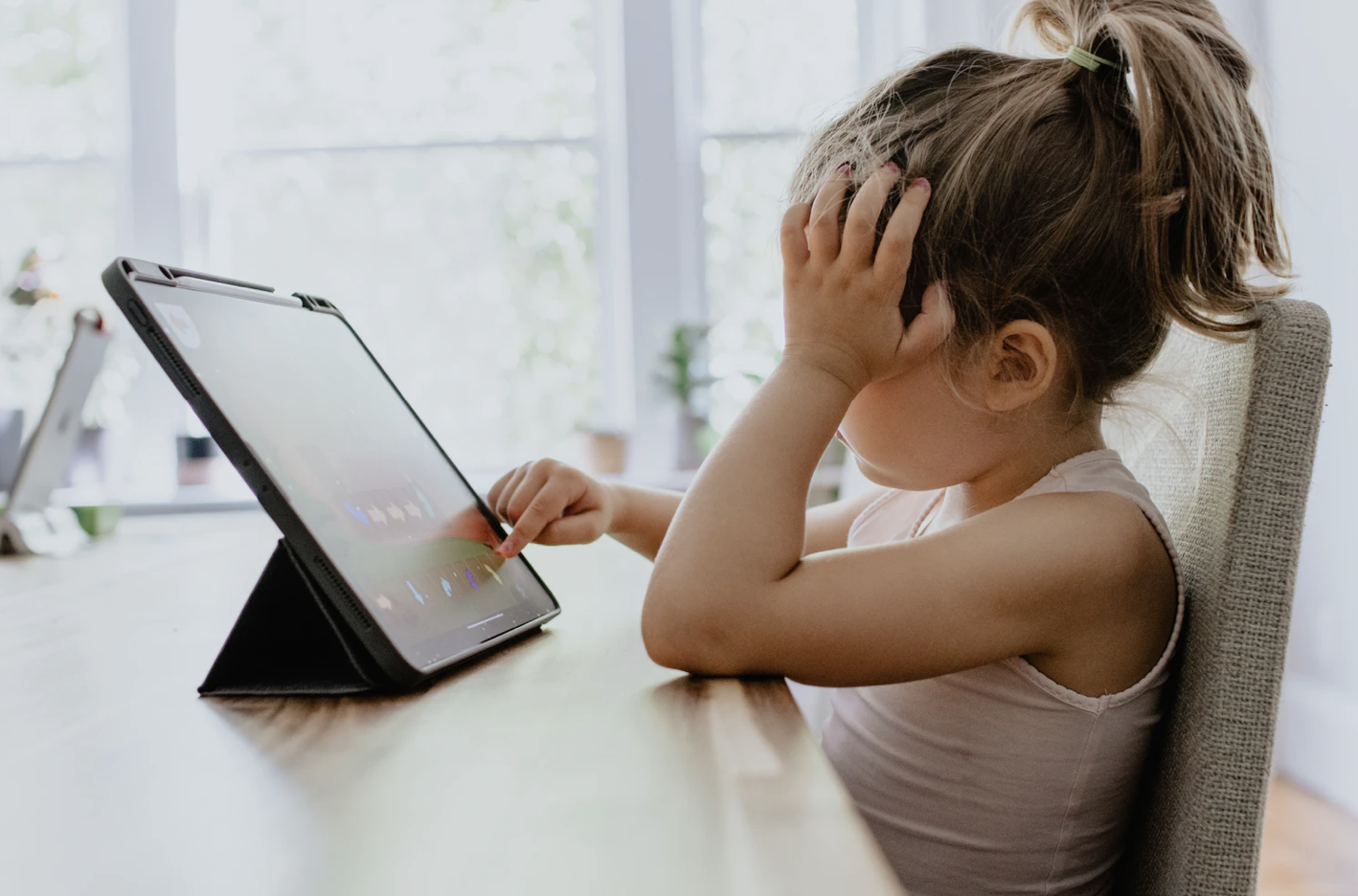 Almost half of Atlantic Canadian parents who responded to a recent family survey believe their child’s emotional and social development has been negatively impacted by the pandemic. Photo: Kelly Sikkema

Melissa Falle’s five-year-old daughter Evelyn is finishing Grade Primary next month. She’s a pleasant child, diligent about homework and online learning, and her parents are grateful to be spending extra time with her during lockdown.

But the Bedford mother has noticed that during this latest lockdown, her daughter is uncharacteristically quick to pout and cry if she hears the word ‘no,’ or if there’s any delay in getting what she wants — something simple like a snack, for example.

Falle’s experiences reflect those of about half of Atlantic Canadian parents and guardians who responded to a survey about the pandemic’s impact on families between March 9 and April 5. The survey was open to families with children between the ages of zero and eight.

The good news is more than two-thirds of the 935 respondents believed their children’s language, communication, and physical development was not impacted by the pandemic.

The survey did, however, find that almost half felt their children’s social and emotional development had been negatively impacted. 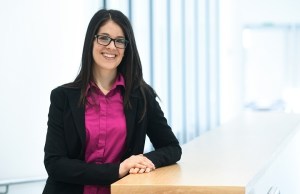 “With respect to child development it’s something for us to keep an eye on,” McIsaac said in an interview. “A lot of this is from the perspective of parents. It’s also in the now.”

“We don’t know if some of the impacts on children that we are seeing now will translate into the future, but I think we have to keep an eye on it.”

The survey responses reflect global research examining the emotional and social development of young children as a result of COVID-19 and related restrictions.

“Children are not the face of this pandemic. But they risk being among its biggest victims, as children’s lives are nonetheless being changed in profound ways,” notes UNICEF’s data hub on COVID-19 and children.

“All children, of all ages, and in all countries, are being affected, in particular by the socio-economic impacts … This is a universal crisis and, for some children, the impact will be lifelong.”

An article published in The Lancet Child & Adolescent Health journal last July called the number of children globally affected by school closures “staggering,” estimating the figure to be more than 1.4 billion children in 190 countries — about 86% of the world’s school-age children.

More recently, an Irish study published in the Early Childhood Education Journal on April 27 found that as a result of the pandemic, children were missing friends and playing with other children, in addition to the routine and structure of early childhood care and school settings.

One parent cited in the study shared how their seven-year-old was “missing friends and schools so tantrums are regular and bedtime is disrupted.” Another parent described their son, also seven, as missing the routine provided by school, noting he was suffering from “isolation and anxiety.”

A parent of a six-year-old said their child’s behavioural issues were magnified, while another parent noted their seven-year-old daughter’s lack of energy and “all the down time” had decreased her interest and her mood.

The authors stated that parents involved in their study were concerned about the social and emotional development of their young children not only now, but into the future.

“Parents described the negative impact of the closure of these settings on their children’s social and emotional well-being, which they suggested, resulted in tantrums, anxiety, clinginess, boredom, and under-stimulation,” the article’s researchers noted.

“The findings from the current study, and from others internationally, suggest that some young children may need additional support in overcoming some of the negative impacts of the COVID-19 crisis on their socio-emotional development.”

McIssac described their research findings as well-aligned with the results from the Irish study. 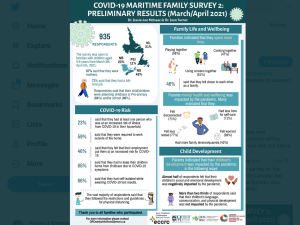 A graphic featuring some of the preliminary results of a recent survey examining how Atlantic Canadian families with young children were faring during the pandemic. Graphic: Mount Saint Vincent University’s Early Childhood Collaborative Research Centre

“Certainly as we get back into school and child care in the fall, I think we really have to pay attention and try to see if there are different ways that we might need to support children in social and emotional skills,” she said.

In addition to the survey, McIsaac and her team also conducted interviews with several Atlantic Canadian families who participated. She said they frequently heard about how children were missing interaction with their peers both in school and child care centres and outside of them.

“Social emotional development is not something that is developed overnight. It’s really something we have to continually work on with kids to support their self-regulation, behaviour management, those types of things,” McIsaac said.

“We need to be paying attention to the fact that we know that this disruption has impacted their development and really try to support them once we get back into those social spaces, to build those skills so that they can carry that forward into the later years.”

One of the other key findings from the survey was that the mental health and well-being of Atlantic Canadian parents with children between the ages of zero and eight has been substantially impacted by the pandemic.

Those numbers were up from the researchers’ first survey last year (reported here) when 63% of Maritime parents who participated indicated they were feeling less rested during the early days of the pandemic.

“Almost three-quarters of families were feeling less rested, disconnected, had less time for self care, worried,” McIsaac said. “The impact on parents, on caregivers, was one thing that we heard again. A year later and it’s still certainly having an impact.”

As much as she enjoys having her daughter home, Falle is no exception there either. Like many parents juggling parenting, online learning and full-time jobs from home, she finds the experience exhausting.

Compared to pre-pandemic life, she said there is no time for self care and the only time she has to herself is when Evelyn is in bed asleep. 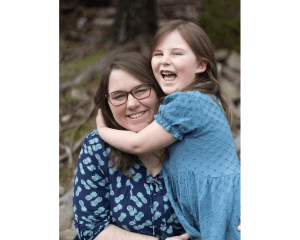 “She needs a lot of attention. My partner and I work from home right now so it’s been really hard to balance her needs versus what we need to do to do our work,” Falle said in an interview.

Falle also worries that her daughter is getting less physical activity these days.

“That’s kind of a stress for us at the moment because it’s hard to get her to want to go outside if it’s just with me or her dad,” she said, adding that online spending has increased at her house as she searches for fun and educational items and activities to help keep her daughter entertained.

Most recently, she purchased a trampoline to encourage her to spend more time outside.

Falle said despite the challenges, she’s grateful to be able to spend time at home with her daughter at this stage of their lives.

“There will be no other time in her childhood or my working life that I’ll be able to do that with her,” she said. “So, whenever I get a little bit upset or a day or a moment is hard, I always think, ‘You know what? You’re very lucky that you’re able to be with her at this time.’”

Atlantic Canadian survey respondents reported spending more time playing together (58%), using screens together (61%), and cooking together (47%). In addition, 46% said they felt “closer to each other as a family.”

Participants were also asked about COVID-19 risk. Overall, 66% said they had self-isolated while awaiting COVID-19 test results, 65% said they had to keep their children home from child care due to symptoms of the virus, and 59% stated they were required to work outside of the home.

McIsaac said more robust details from the survey will be available through the summer and fall, and they have peer-reviewed publications currently underway.

She believes these results are important because they help identify areas of concern where people may need support.

“We need to pay attention to things now and also monitor things in the future. Similar to the impact on children. I think the aspect around social and emotional development will be something that we’ll need to continue to monitor.”