You are here: Home / Commentary / Sunday is Emancipation Day; I’ll be celebrating with Corey Wright’s watermelon mango ale and pointing to freedom

Juneteenth. Emancipation Day. Standouts among the works that chronicle efforts to commemorate the official end of slavery in the United States and throughout the British empire include On Juneteenth by Annette Gordon-Reed and Emancipation Day: Celebrating Freedom in Canada by Natasha Henry.

“Very few Canadians are aware that at one time their nation’s economy was firmly linked to African slavery through the building and sale of slave ships, the sale and purchase of slaves … and the exchange of timber, cod, and other food items from the Maritimes for West-Indian slave-produced goods such as rum, tobacco, cotton, coffee, molasses, and sugar,” writes Henry, president of the Ontario Black History Society.

On Sunday, August 1, Emancipation Day will be celebrated, for the first time, as a national holiday. The date marks the day in 1834 that the British Slavery Abolition Act came into effect, freeing about 800,000 Blacks from bondage, including multitudes held captive in Canada.

Indeed, the Nova Scotia Archives is chockablock with evidence of the prevalence of slavery in the province. Consider the advertisement for the sale of a “well made Negro boy, about sixteen years old” that appeared in the March 28, 1755 edition of the Nova Scotia Gazette and Weekly Chronicle.

Then, there’s the 1759 letter in which prominent Halifax merchant Malachy Salter beseeched his wife (then visiting Boston) to return home with another slave because “his young slave boy named Jack caused him a great deal of trouble,” writes Harvey Amani Whitfield in “Slavery in English Nova Scotia, 1750-1810.” Displeased with Jack’s behaviour, Salter further noted, in the letter, that he’d been “obliged” to flog the youngster “almost every day.”

As an MLA, Malachy Salter (namesake of Salter Street in Halifax) sat in the Nova Scotia House of Assembly for more than a decade. Portraits of him and his wife, Susanna, today hold pride of place in the Legislative Library at Province House. As for me, I’ll celebrate Emancipation Day with food and drink from local establishments that embrace equity and inclusion, such as Good Robot Brewing in Halifax. At noon on August 1, the brewery will toast the occasion by offering all customers a free, 12 ounce pint of a watermelon mango ale that the brewery developed with African Nova Scotian activist Corey Wright. Festivities will also include a “liberation” music playlist and take-home, commemorative Emancipation Day cards.

About the brew, Wright says: “Watermelon does not represent just a flavour for me. [It] signifies the entrepreneurship of my ancestors. The stereotype that Black people love watermelon actually stems from when slavery was abolished and watermelon farms were one of the main sources of income for indigenous Blacks.”

Historian William R. Black expands on the topic in his superb article “How Watermelons Became a Racist Trope.”

Emancipation Day will also find me reflecting on the Reverend Martin Luther King, Jr., and my recent sighting of a cardinal as it flitted about in my backyard. Long abundant in the US southeast, cardinals have been extending their range northward for decades, according to The Audubon Field Guide. For sure, I’ve seen the birds with increasing frequency and, in homage to the stage name of the bodacious rap artist born Belcalis Almanzar, I’ve even christened one, “Cardi B.” 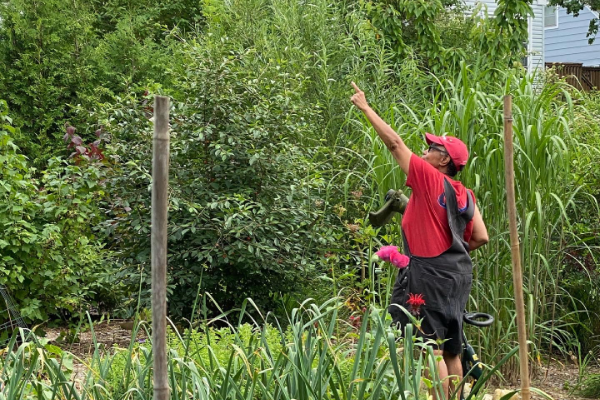 Spurred by her memory of a photograph that captured the murder of Martin Luther King, the author instinctively pointed “freeze frame” skyward. Photo contributed

So when I recently heard the distinctive whistle of a cardinal, I arose from my garden chair to catch a glimpse of the bird. There it sat, atop a neighbour’s tree. My finger pointed toward the cardinal, I implored my partner to take a picture. “You’re still pointing,” Joanne said, as my arm remained aloft, long after she’d snapped the photo.

For my “freeze frame” gesture had been prompted, instinctively, by an image that I’d carried within me for more than fifty years. I’m talking about the photograph of the self-described “drum major for justice” as he lay, felled, by an assassin’s bullet on April 4, 1968, in Memphis, Tennessee. Aides who’d been standing next to Reverend King on the balcony at the Lorraine Motel were photographed pointing toward the direction from which the fatal shot had been fired. The horrific image was later transmitted around the world.

Spurred by my reflexive response to the cardinal, I researched the person who’d taken the iconic photograph. His name? Joseph Louw. Louw was a “coloured” South African journalist who, fed up with apartheid, had fled his homeland in the early 1960s. He’d travelled to Memphis to film King for a documentary and was staying a few doors down from the civil rights leader at the motel when he heard a loud noise. He rushed out of his room to find King mortally wounded.

In a riveting broadcast three days after King’s murder, Louw detailed the tragic sequence of events. Louw later returned to Africa where he ultimately abandoned his journalism career and became a farmer. He reportedly died in Johannesburg at age 64, in 2004.

In pointing toward the cardinal — in all its ruby splendour — I’d aimed to counter, by proxy, the anguish that Joseph Louw surely felt as he trained his camera on King.

As we approach Canada’s first nationwide Emancipation Day celebration, I’m mindful that King ended his famous “I Have a Dream” speech with words that will ring with special poignancy on Sunday: “Free at last! Free at last! Thank God, Almighty, we are free at last!”