You are here: Home / Commentary / Stop the presses 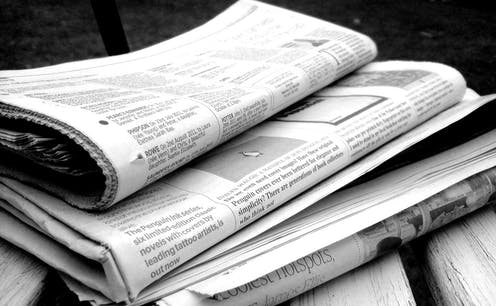 When I first saw Tim Bousquet’s 9:33 pm Facebook post on Wednesday, March 18, 2020 — deep in the bottomless trough of that still surreal week when everything changed about everything for all of us in a COVID-19 minute — I was stunned.

“Tomorrow is the last print publication of The Coast…”

I have been following the course of The Coast for close to 30 years, since even before there was a print publication, when it was still just the fanciful summer-job dream of a few King’s Journalism School grads and their assorted talented friends and hangers-on.

Contrary to its creation myth, I never thought it was a smart idea. I’d tried — and failed — as a publisher myself, so I knew just how heartbreaking such unrequited love can be.

They went ahead anyway — as people with dreams do — pretending my flashing red lights were green GO signals.

There were many times, especially in those early years, when they almost didn’t make it, when the printer got nervous about outstanding bills, when juggling part-time low-paying jobs with more-than-full-time unpaid hours churning out the next edition of the paper, then hand-distributing it all over town, then rinse-repeat starting all over again seemed much too much.

But they persevered. And they succeeded. The Coast became an essential part of the fabric of Halifax city life. Its arts coverage and encyclopedic listings made it a must-read. Its journalism won national and regional awards. It gave many young journalists an invaluable chance to make their best first impression. More than a few owe their careers to the clippings they collected while writing for The Coast.

It’s never been easy. It never is. Co-founders Kyle Shaw and Christine Oreskovich had to adapt, evolve. They created an always updating online edition, switched printers, ported their Best-of guides into standalone publications, began hosting oyster festivals and burger weeks and all manner of moneymaking special events, all to increase revenues in order to keep its flagship print publication publishing every week.

It worked. Until it didn’t.

The immediate cause, of course, was the pandemic that shuttered the city’s restaurants and bars and silenced its theatre stages and concert venues while draining The Coast’s advertising lifeblood and keeping the rest of us self-isolated and social-distanced from local entertainments for who knows how long.

The deeper causes are, well, deeper. And well known. And not really all about The Coast. Causes for which there is no vaccine: the internet, “free news,” the collapse of print advertising, the rise of Facebook and Google and Twitter and Instagram and all the rest of the unregulated, untaxed global ad-dollar-sucking, news-stealing behemoths.

Within days of the news The Coast was suspending print publication, there was the “this-is-not-what-we-want-to-do-it’s-what-we-must-do” letter to readers from CEO Mark Lever, the CEO of Saltwire, the publisher of the Chronicle Herald. Lever announced the company was suspending publication of all its weeklies, combining its two Prince Edward Island dailies into one and laying off 40% of its entire workforce because of COVID-19.

Although I’ve never been a fan of Lever’s management style and have always thought his go-for-broke, borrow-to-the-gunnels strategy in creating Saltwire from the self-immolated ashes of the 19-month Herald strike in 2017 was a recipe tailor-made for just such a disaster… even I found it hard not to sympathize with the sad, hard truth in his explanation: “Based on our current reality, we are certain the plan we have outlined is our best and only option to navigate economic and market conditions.”

Those current economic and market conditions are global.

According to Friends of Canadian Broadcasting, “the number of [Canadian] journalists laid off due to COVID-19 has passed the 2,000 mark.” The New York Times reported Friday 28,000 US journalists have now been “laid off, furloughed, or had their pay reduced” because of the pandemic.

The media story about the media is the same everywhere.

The irony, of course, is that finding an audience in this time of global crisis eager to pay attention to journalism — if not pay for it — is not the problem.

“The traffic numbers are still way up,” David Chavern, head of the News Media Alliance, a trade association representing newspapers in the U.S. and Canada, told the Times. “The digital subscriptions are hanging in there.” But… “the ad contraction is brutal and continuing.”

Our more-than-a-century-old newspaper publishing model — print-on-paper journalism paid for primarily by advertisers seeking eyeballs for their messages— simply doesn’t work anymore. It hasn’t for more than an internet hour. The current pandemic has simply, as my Leninist friends like to say, “heightened the contradictions.”

The question is what can — what should — we do about it?

For starters, of course, we as individual citizens need to recognize news isn’t free to produce, so we need to subscribe and/or donate to the media of our choosing. (I could suggest at least one deserving medium, but I digress.)

Beyond that, what is — is there? — a role for government in supporting journalism in this new world order.

Even before COVID, Ottawa recognized there was a crisis. In November 2018, it announced a controversial $595-million five-year package to intubate an industry even then gasping its final breath.

There were some positive measures, including making “non-profit journalism organizations that produce a wide variety of news and information of interest to Canadians” eligible for charitable status and the official tax receipts that help encourage potential donors to open their wallets.

But most of what the government promised then was designed more to extend the life of a doomed print publishing industry than to come up with new and sustainable models for journalism. That’s largely because Ottawa was only listening to the lobbyists from the legacy news media who continued to assume theirs was the only journalism model.

Not much of anything in the government’s grandly announced plan had been done to transform its promise into reality by the time the coronavirus blew up everyone’s reality.

So, the government did what it does. “Right now, it is more important than ever that Canadians have access to the latest news and information,” Prime Minister Justin Trudeau earnestly declared from the splendid isolation of his front steps. “To ensure that journalists can continue to do this vital work, our government is announcing new measures to support them.”

The new measures were mostly the old measures, tarted up and re-announced with a dollop of urgency and the naming of an expert panel to finally figure out how to dispense its life-support largesse.

The only real new spending — $30 million to buy federal government wash-your-hands advertising to raise awareness of COVID-19 — was probably necessary to keep doors open and stave off the end but even it will not be enough to save many publishers from their final pandemic death rattle.

Which means we are back to the drawing board, still needing to figure out inventive ways to make it easier for journalism, if not conventional publishing, to flower again. 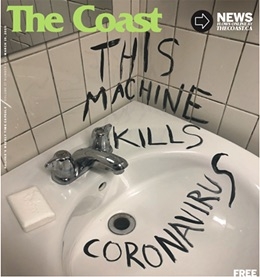 In the meantime, The Coast has gone online-only during what it calls its “pause” in print publishing. It is asking readers for voluntary donations “to sustain our editors and writers to keep the news flowing,” while encouraging readers to patronize those local businesses still able to run ads on their site.

Thanks to The Coast’s encyclopedic listings and the print edition’s traditional when-you-need-it omnipresence in our city, it may be one of those rare ad-supported print-on-paper vehicles that can survive the internet and even this pandemic and resume its print publishing schedule. Here’s hoping.

“We’re not giving up on the city we love,” declares The Coast’s new online banner.  And the city shouldn’t give up on The Coast.

Speaking of which, The Examiner is making its extensive COVID-19 coverage free as a public service. But it isn’t free to produce. The Examiner depends entirely on subscribers to fund its journalism. If you haven’t already — and you can — you should consider subscribing.

We now also allow for one-time donations from readers, via the PayPal button below. We also accept e-transfers, cheques, and donations with your credit card; please contact iris “at” halifaxexaminer “dot” ca for details.