You are here: Home / Featured / Stephen McNeil held a scripted PR event and the compliant media played along 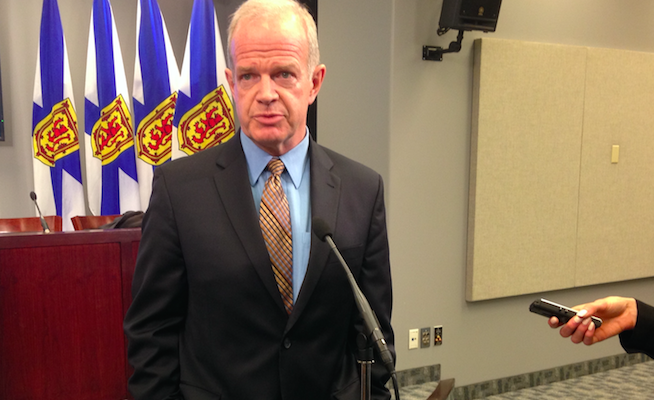 “If you aren’t keen on police roughing you up and cuffing you at a pubic meeting, or corporations dialing up the Mounties to act as bouncers, then go file a complaint with one of two watchdogs that investigate actions by RCMP officers,” reports Jennifer Henderson. “That’s the identical response which Premier Stephen McNeil, Justice Minister Mark Furey, and Energy and Mines Minister Derek Mombourquette were offering John Perkins yesterday.”

Click here to read “McNeil government: if John Perkins doesn’t like being wrestled to the floor at a public meeting, he can file a complaint.”

Besides everything else, I was taken with Justice Minister Mark Furey’s claim that he hasn’t seen the video of John Perkins being arrested. I mean, I would hope that he’d take a coffee break and read Morning File each day, but how is it possible that Furey’s staff hasn’t alerted him to a high-profile arrest involving the police force he oversees? As of this morning, the video has been watched 14,710 times; the international mining business press has reported on it, and we’ve gotten comments about it from as far afield as Australia. We pay those government communication experts a lot of money — the head communications contact at Justice was paid $89,633 last year — so would it be too much to expect one of them to knock on Furey’s door and say, “boss, you ought to have a look at this”?

Maybe they were too busy scripting PR events.

2. Stephen McNeil held a scripted PR event and the compliant media played along 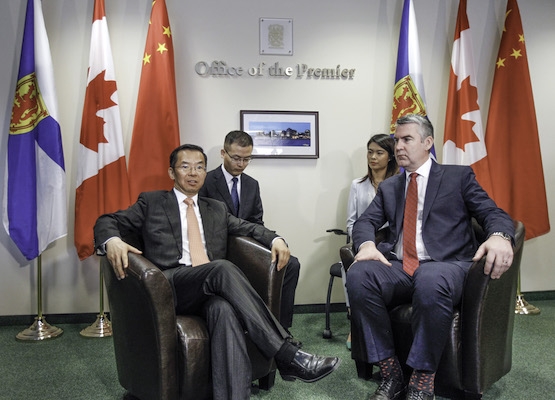 Premier Stephen McNeil is meeting with China’s Ambassador to Canada, Lu Shaye, on Wednesday, May 29. Media are invited to take photos of the premier with the ambassador between 8:30 a.m. and 8:40 a.m.

The photo opportunity will be held at One Government Place, 1700 Granville St., Halifax. Media will be escorted to the 7th floor.

Media planning to attend should submit the names of the reporters, photographers and camera operators attending by 4:30 p.m. today, Tuesday, May 28. Names should be emailed to Khalehla Perrault at [email protected]. Only media who have submitted their names will be allowed in.

No reason was given for the pre-screening of reporters, but it was clear from the email that this was a photo-op, and not a press conference.

Reporting on government requires actually asking questions, but reporters were told that no questions would be allowed.

The role of the free and independent media is to be a watchdog of government, to ask challenging questions, to give readers context — not to act as stenographers for government. The proper response when told that no questions would be allowed from reporters is for editors to direct the government to the advertising department: If you don’t want to be challenged, buy a fucking ad.

And yet, local media fell in line, presubmitted their reporters’ names for government approval, and then dutifully went to the event and took photos without asking questions. There’s no surprise that the resulting articles read like government propaganda, because that’s essentially what they were.

“Days after saying the Canada-China relationship was at a ‘freezing point,’ China’s ambassador to Canada called Nova Scotia’s premier a friend and thanked him for continuing to work with Chinese officials,” wrote Taryn Grant for Star Halifax, who undoubtedly gets paid a hell of a lot less than the $89,633 the government PR person pulls in, but is doing the government’s PR bidding all the same.

“I come to Halifax, Nova Scotia to meet again with my great friend Premier McNeil to host together the second working dialogue between the Chinese embassy and the provincial government of Nova Scotia,” [Lu Shaye] said. “I’m sure that the dialogue today will also be fruitful.”

This is sickening sycophantic shit.

FFS, China is operating concentration camps, rounding up a million or so Muslims and forcibly detaining them for “reeducation.” And yet neither reporter mentioned human rights at all, although each mentioned the Huawei dispute and the subsequent arrest of Canadians.

As I tweeted yesterday, we reporters are under no obligation to rerun government press releases or cover their photo ops. And if we do show up, we’re not bound by government’s dictate to not ask questions. The choice was to write either A) “no questions were allowed” or B) “asked why he’s cozying up to a government operating concentration camps holding a million Muslims, the premier refused to answer.” B is better.

“Amidst a funding and staffing crisis at the only sexual assault centre for women in Halifax, a social worker is calling for more help for male sexual assault victims,” reports Sherri Borden Colley for the CBC:

Robert Wright, who works in private practice, runs a confidential support group for men who have been sexually abused. The group meets twice monthly.

In the last fiscal year, ManTalk and New Start — another group that provides counselling to men who have experienced sexual assault — received $26,000 each from the province’s sexual violence strategy.

Wright said the funding for those two groups is a fraction of what the Avalon Sexual Assault Centre receives from the provincial government. Avalon provides a wide range of services to women and is the only sexual assault centre in the Halifax area.

Wright said conservative statistics say that one in three women and about one in six men will be sexually assaulted in their lifetime.

“That means that the incidence of sexual abuse of men and boys … it’s not a small number, it’s about half as many as women,” Wright said.

“And yet despite that high level of incidence, other than the services I’ve mentioned, there really has not been any focused service delivery for male-identified victims.”

Wright stressed he’s not advocating that Avalon get less money.

The Transportation Safety Board yesterday updated its accounts of two incidents involving helicopters flying out of Halifax; both helicopters were operated by Canadian Helicopter Limited.

The first incident occurred on July 30 of last year:

UPDATE: A VFR Canadian Helicopter Limited Sirorsky S-92A (CDN2) on a flight departing Halifax, NS (CYHZ) and landing at Halifax, NS (CYHZ) responded to a MAYDAY call on marine FM Channel 16 in the Lawrencetown, NS area at 2248Z. MAYDAY resolved at 2254Z and CDN2 proceeding back to CYHZ VFR.

The second incident occurred on January 3 of this year:

UPDATE: A Canadian Helicopters Limited Sikorsky S-92A (C-GNZH/CDN1) from Halifax/Stanfield, NS (CYHZ) reported a couple of anomalies while en route to an Oil Rig and returned to CYHZ. No emergency was declared and there was no impact to operations. The aircraft landed safely at 1255Z.

No one was injured in either incident, but “a couple of anomalies” sound ominous.

Stephen Archibald went to Athens, and among many other observations had this one:

A new name I learned was herm. It is “a sculpture with a head, and perhaps a torso, above a plain, usually squared lower section, on which male genitals may also be carved at the appropriate height” (Wikipedia). This is an enduring sculptural style for representing dead white men but I’d never seen them with the manly bits. That’s a tradition we could re-introduce. 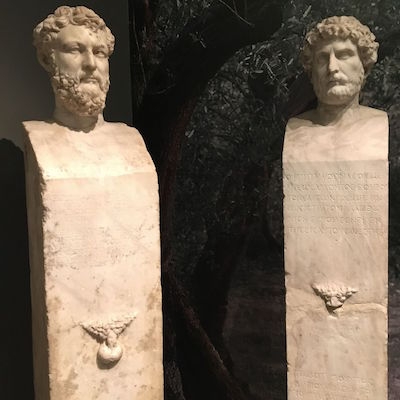 Imagine the herms in the atrium of Founders Square on Hollis Street with some extra parts added. That would make you stop and consider the legacy of Joe Howe. 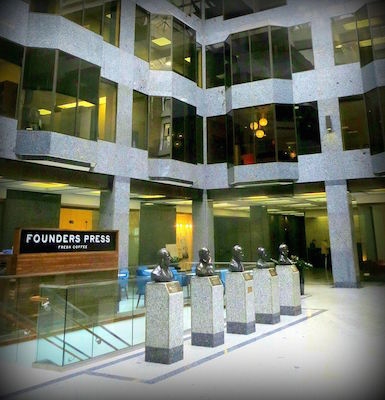 Spring Convocation, morning ceremony (Friday, 9am, Rebecca Cohn Auditorium) — for graduates in the Faculties of Science and Graduate Studies.

Local Research, Global Impact (Friday, 12pm, Theatre B, Tupper Building) — four mini-lectures exploring how Dal researchers “are developing cancer-killing viruses and tumour-shrinking glass; how we are just one step closer to unlocking the key to curing Alzheimer’s disease; and how a newfangled program is empowering children and youth as change agents for the health and wellbeing of themselves, their families and communities.”

Entrepreneurship and the Ecosystem (Friday, 11:30am, Volta, Unit 100, 1505 Barrington Street) — we’re all going to be rich, just so long as none of those tech bros are unionized.

Sunday
08:00: Saga Sapphire, cruise ship with up to 748 passengers, arrives at Pier 22 from Corner Brook, on a 16-day cruise from Montreal to Dover, England. Next stop is Ponta Delgada, Sao Miguel Island, Azores.