You are here: Home / Featured / Steeped in the Culture of Defeat: Morning File, Monday, November 10, 2014

Police have concluded that the missing 71-year-old man “went overboard while on the ferry from North Sydney, Nova Scotia to Port aux Basques, Newfoundland overnight on October 26-27. Foul play is not suspected.”

“For reasons we will likely never receive the answers to, Jim ended his own life while making the Ferry crossing,” wrote his son-in-law, Tom Martin, in a Facebook post. “Something broke in Jim that day and we have no idea of what or why. What we do know is we were blessed to have him in our lives.”

The man mistakenly released from the Burnside jail has been found and returned to the jail. He was in Spryfield.

The CBC explains that:

During the war, CFB Greenwood was a training base for commonwealth pilots. Across Nova Scotia, there were hundreds of crashes, which resulted in the deaths of dozens of pilots. The crash sites were cleared of debris and then abandoned.

Russ Keddy and Chris Larsen are now going around the province and trying to identify the sites and erect memorials near them.

Sean Howard and Lee-Anne Broadhead, two profs at Cape Breton University and members of Peace Quest Cape Breton, tell us why Remembrance Day “shouldn’t make us proud to be Canadians, but rather determined to end war.” 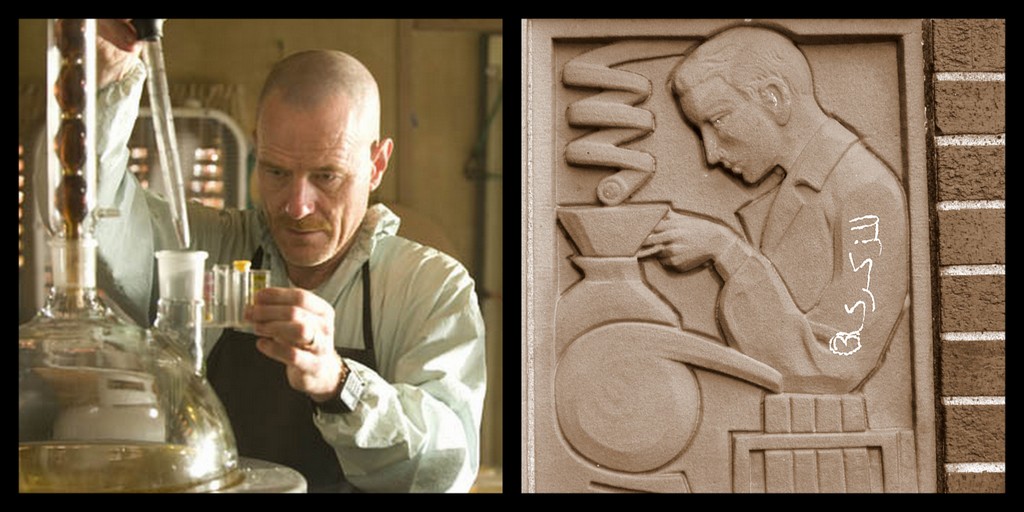 Recently, Stephen Archibald showed up photos of local statues and bas-reliefs depicting women at work. Today, he extends the collection to men, among them the panels at Queen Elizabeth High School, including the above. “There was also a chemist,” he writes. “You will get a sense of my deep thinking when I tell you that high school chemistry brings Walter White to mind.”

Hello,
I am not someone who ever comments on CBC shows although I am an avid listener. Today I feel I must send an email. I am writing to say I am disappointed on the treatment that you gave the ladies request for a song with bagpipes. It was to honor her father who had passed away. You played only a few seconds then interrupted and then went to news. If you did not intend to honor her wishes completely why bother at all. It is just puzzling the way it was done and perhaps a bit disrespectful. I realize that not everyone is a bagpipe fan, but that could be said for any music. Your listeners tend to be open to all kinds of music and that it why you show is so great.
Sincerely,
Bonnie Sturgeon

This reminds me of my buddy Iain, an experienced piper. A few months ago, Iain had a gig piping at a funeral. While he was driving to the cemetery with his pipes in the back seat, he decided to quickly stop at the bank downtown. He found a parking space a block from the bank, but in his hurry he forgot to lock the back door to the car. He ran into the bank and right back out, couldn’t have been more than five minutes, but he got back to the car and—you guessed it—found four more sets of pipes in his back seat.

Board of Police Commissioners (12:30pm, City Hall)—Nothing much on the agenda. 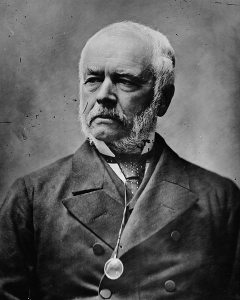 Robert Barry Dickey, founder of the Culture of Defeat.

Robert Barry Dickey was born on this date in 1811, in Amherst. He went on to become a lawyer and was appointed to the Legislative Council of Nova Scotia.

The Canadian Encyclopedia explains that Dickey was just another Maritimer looking for handouts from Upper Canada:

As a delegate to the Charlottetown Conference and the Quebec Conference in 1864, he was strongly opposed to Nova Scotia joining Confederation. He believed that the financial terms offered by Canada to Nova Scotia were unjust. He continued to fight for better terms and only converted to support of the union when Canada offered more lucrative subsidies in 1866. He was appointed to the Canadian Senate in 1867. 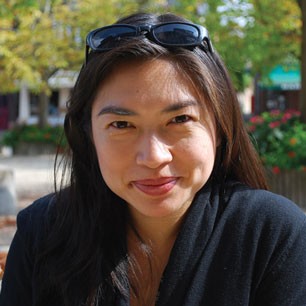 Mellissa Fung (noon, Classroom 3 (Arts and Administration Building)—The former CBC journalist, who reported from the Afghani war zones and was who was abducted while on assignment at a refugee camp on the outskirts of Kabul, will speak on “Inside Afghanistan: Reporting from One of the World’s Most Fragile States.”

The event is open and free to all, but unfortunately King’s wants you to register through their complex and antiquated registration system. Make sure to include the honourific (with options Mr., Mrs., Miss, Ms., Dr. and Hon., because I guess they want to keep a proper gender balance and screen out intersexual guests) and the preferred language (only English or French, no Chinese allowed) or, I’ve discovered, it’ll reject your request outright. I bet, however, you could just show up without registering and it’d be OK. 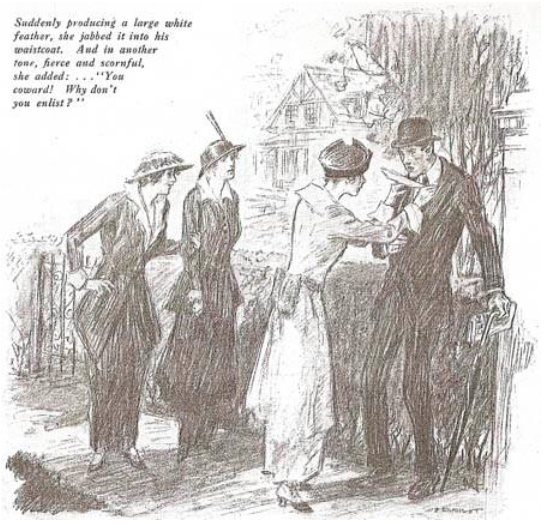 Image from ‘The White Feather: A Sketch of English Recruiting’ by Arnold Bennett, Collier’s Weekly 1914.

Tomorrow, Remembrance Day, is of course the commemoration of soldiers who died in World War 1, the most inane and perverse slaughter ever conceived by humanity. The bloodletting had nothing at all to do with “keeping us free” or any of the other empty sloganeering we now employ with false solemnity. In Britain, many of the boys and young men expected to carry out the task could see right through the bullshit and so refused to join the all-volunteer army. They therefore had to be shamed into “serving” the cause.

This bit of ugliness has its origins in The Four Feathers, a 1902 “adventure novel” written by A.E.W. Mason. The book celebrated the Boer War, itself a murderous spree of empire building. Good Reads summarizes the plot like this:

Just before sailing off to war in the Sudan, British guardsman Harry Feversham quits his regiment. He immediately receives four white feathers-symbols of cowardice-one each from his three best friends and his fiancée. To disprove this grave dishonor, Harry dons an Arabian disguise and leaves for the Sudan, where he anonymously comes to the aid of his three friends, saving each of their lives. Having proved his bravery, Harry returns to England, hoping to regain the love and respect of his fiancée. This suspenseful tale movingly depicts a distinctive code of honor that was deeply valued and strongly promoted by the British during the height of their imperial power.

A dozen years later, British military planners were annoyed to find that potential soldiers were reluctant to jump at the almost certain chance for their own demise, and so Admiral Charles Fitzgerald founded the Order of the White Feather. Women on the home front were encouraged to find young men who had not enlisted and humiliate them in public by pinning a white feather on them, a badge of cowardice.

Women and girls scoured the streets indiscriminately handing out white feathers not just to principled pacifists and men looking to care for their families, but also to injured soldiers returning from the front, civil servants, boys too young to fight and anyone else in their targets. 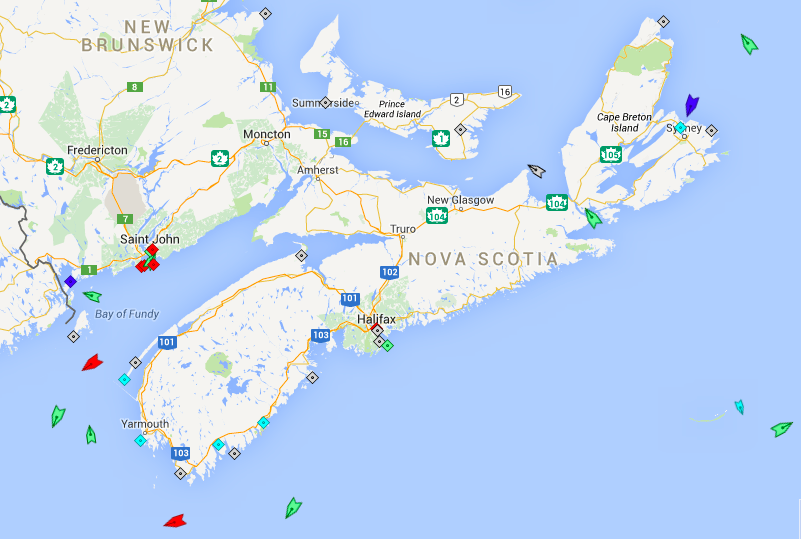 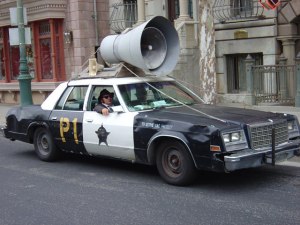 Should you get one? It’s got a cop motor, a 440 cubic inch plant, it’s got cop tires, cop suspensions, cop shocks. It’s a model made before catalytic converters so it’ll run good on regular gas.

On the other hand, the cigarette lighter is broken.