You are here: Home / Commentary / Steal Away Home: Eddie Carvery’s protest and the value of Black life

This Saturday, I took a guest speaker to Africville. Black people across the world have heard of the destruction of the community, and they always want to make a pilgrimage to bear witness on the land. After visiting the sundial with the names of families who lived in Africville, we drove to the museum, where I expected to see Eddie Carvery’s trailer with its handprinted sign of protest. 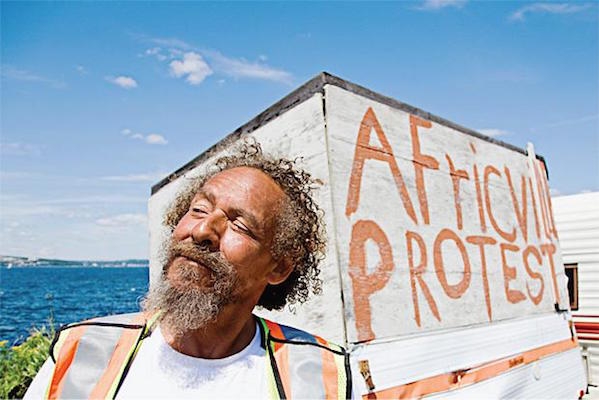 “What happened to Eddie?” I asked my companions. Now we find out, of course, that Carvery’s protest has been dismantled, and the trailers have been destroyed.

Before anything else, this is a man’s home and possessions. That they can be wiped out shows the destruction of Africville repeating itself. That this took place despite the city’s 2010 apology for the destruction of Africville shows how little public apologies for historical injustice actually affect the lives of Black people living with the aftereffects of displacement and oppression. We would do well to remember this moment as police chief Dan Kinsella prepares to make another “historic” apology for the racial profiling, criminalization, and violation of Black people and communities.

Beyond the trailers being Carvery’s home, the protest sign is part of Canadian history. It is bad enough that our humanity is not respected enough to treat our possessions with dignity, but our very history and artifacts are discarded like they are garbage.

It is not surprising that city council, which has agonized over what to do with the statue of Cornwallis, has no similar respect for preserving the monuments of Black life in this city. Carvery’s sign should, at the very least, be in a museum. That it has been treated as meaningless is yet another stark reminder of how the community of Africville and its residents have been continually disrespected, erased, and wiped away.

It is no less of an indignity to Black people that Carvery’s sign was not accorded the respect it deserves as the longest symbol of protest in this country than it was when the people themselves had their possessions placed on city garbage trucks. The meaning is clear.

Update: Eddie’s brother Irvine, of the Africville Geneological Society, tells us that Eddie’s Carvery’s sign has been located and “will be restored.”

Before the weekend, mummy called to tell me my cousin Susan had passed in Trinidad. Besides my sadness for my beautiful, vibrant cousin, and the usual feelings of mortality that come with the deaths of family members, I was struck with another sorrow.

Susie was living in the family home. Ever since my Auntie Marion, known in the family as Cutie, died in 2016, the family has worried about what to do with the house. My Auntie Marion represented the kind of Caribbean women’s histories that remain untold and unacknowledged. It was largely on her back that our family was pulled from poverty. A brilliant scholar and writer, she was the first Black girl to be granted entrance into the Convent school, a feat accomplished through her unprecedented performance on the placement exams.

Growing up, my mother told us stories mixed with triumph and oppression. The success of Auntie Marion was balanced by the moments my mother also shared of the nuns forbidding her to sing in the choir because they didn’t want to see different coloured legs.

Marion would go onto become the first Black woman admitted into the Agricultural college. Surviving an abusive relationship, she migrated to London, where she earned her PhD at the London School of Economics, and eventually lived in Paris and worked at UNESCO on the early commissions on race and racism. It was the money she sent back home that allowed her younger sisters to pay for their education, including my mother, the youngest, who left the island at 15 to live with her in London. She was a pioneering Black female author in the Caribbean, writing two novels under the name Marion Patrick Jones. 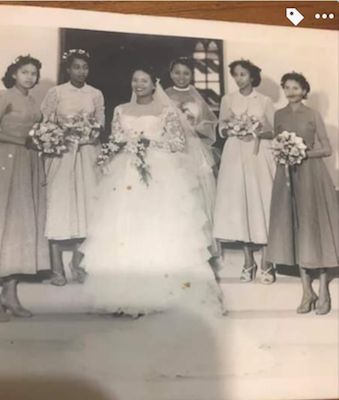 My Auntie Shirley and her sisters at her wedding.

When she retired, she returned to Trinidad and restored the family home, where she lived, first with my Grandmother and Uncle Roland, and then after their passing and the passing of her husband, by herself. This home, in Woodbrook, Port of Spain, represented the up from slavery trajectory of our family. Some great uncle, the story goes, was a builder, and was thus able after constructing houses for the more socially advantaged to build a home on the edges of what was at the time a respectable white and light brown skinned community.

In this home, my grandfather, calypsonian, fireworks maker, and revolutionary, met in the times of independence with great thinkers like Eric Williams, as they argued about the shape decolonization would take. In this home were the stories of how the government, who believed my grandfather to be a potential terrorist, raided the home looking for gunpowder while the fireworks were hidden in the oven. My religious, respectable grandmother calmly stood over the stove with my mother on her hip, brazening it out until the police left.

My mother raised us on family pride. Speaking about race and racism wasn’t her style, but she told the political history of colonization and independence through her tales of how and how often our family overcame. My identity as a Black woman is tied to the image I have of that house, and its connection to generations of my family.

And so, with Susie’s passing, my mother told me that we would have to sell the house, which will most likely be razed and made over into condos as the area gentrifies. Like most Caribbean families, we are scattered far away from where our family originated. Of my mother’s sisters, there are now only two left. The rest of us live in Canada, or the U.S., or other islands, and those who still live in Trinidad can’t take care of such a big house, designed for multi-generational families. Soon there will be fewer of us. Too soon my mother. Some time, me. And what will be my leavings? 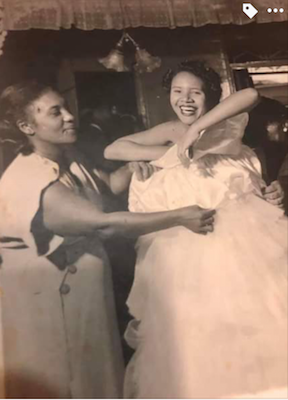 Auntie Shirley gets dressed in the family home.

I have never lived in Trinidad, and it is unlikely I ever will, and yet, the news of the impending loss of the family home cut deep. I am the “you people” Don Cherry speaks of, those of us who carry with us other worlds. Until it was about to be gone, I had not thought how much of an anchor this home was to my sense of belonging to a continuum, to an ancestry, to an identity. In the back of my mind was always the sense that I had somewhere to return to, a place in this world that belonged to me and mine, a thread that connected me to who I am and where I come from.

With the loss of a home I have never inhabited, I feel cut adrift in unexpected ways. I remind myself of the ways family reproduces itself, how we grow in new directions, but I sharply feel the absence, not just of this particular building, but of the entire history of our family, of the struggle for decolonization, of the ways the women in my family clawed their way upwards so I could live and write and be. I mourn for our worlds falling out of existence, for the Black histories we already have so much hardship to preserve, of all the lives of my ancestors who passed without notice, and who we embodied in those walls. Where will I stay if I return? This experience of displacement, exile, and breakage haunts all of us in the diapora. “Sometimes I feel like a motherless child a long way from home,” we sing.

And so I also mourn and rage at the loss of Eddie Carvery’s home, the loss not just of his place, but the constant taking from us of anywhere that we can claim and plant ourselves. It is not enough that we have lost names. It is not enough that our family trees are broken. What we have must be taken and retaken from us, so that we have nowhere to call our own. Not for us the names on buildings and the street signs and the statues. Not even for us the simple bequeathing of possessions to our descendants. Not for us the handing down of tradition. We are left with absence, which we fill with story, cradling our children and telling them, remember when we were here. Remember how we lived. There once was a place we came from.

Who will speak for Eddie? Who will return him to the land, and the land to the people, and the people to community, and the community to time and history? Without our homes, where shall our bones rest, and how shall our souls make their way back?

And if Eddie’s protest and sign and life can be dismantled and erased, what about the rest of us? And if this can be done while he is still living, what hope is there for us after our deaths? What about Black Life in this city and province and country? What worth have we been shown we have when the only history we get is of violence repeating itself upon us?

It is an outrage and a shame.