You are here: Home / Featured / Stanfield’s is switching from making underwear to making protective personal equipment 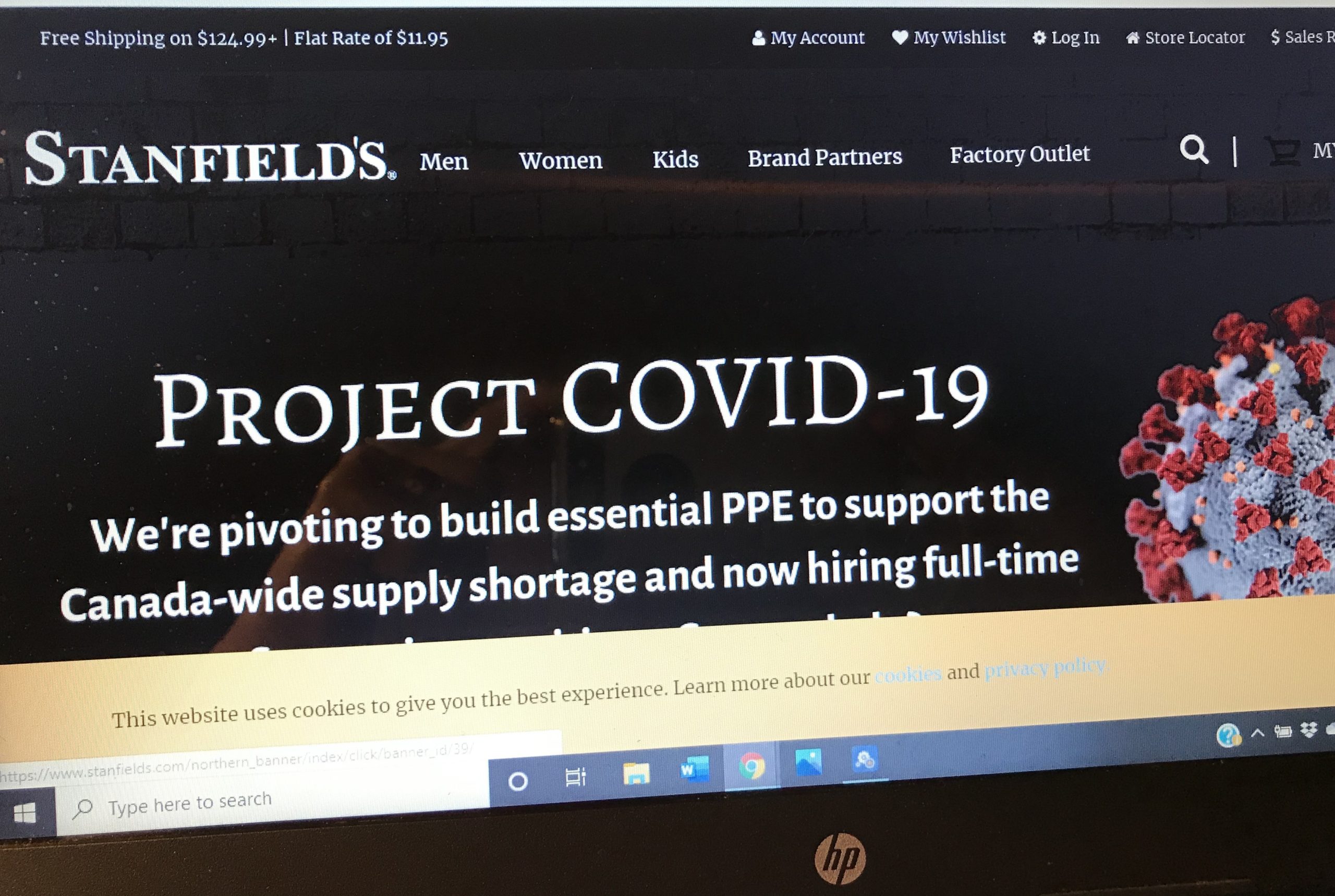 While hundreds of thousands of Canadians have been laid off work, Stanfield’s Limited is in hiring mode.

It’s preparing to re-open its landmark brick 1880s factory in Truro and hire between 72 and 108 new workers to make disposable hospital gowns for front-line health care workers in Nova Scotia and across Canada.

The pandemic had forced the company to close its doors and lay off 200 employees on March 16 after sales of underwear and T-shirts crashed. But now, just a few weeks later, the pandemic has created a new opportunity for Stanfield’s to manufacture protective personal equipment (PPE), which is in short supply for health care workers in contact with suspected or confirmed COVID-19 patients.

The federal government has placed an order for 100,000 isolation gowns each week, from the beginning of May until the end of October. Those 2.6 million gowns will be worth $24 million to Stanfields. The Nova Scotia Health Authority has ordered 30,000 gowns a week for a period of four months, with the first to be delivered by the end of next week. The value of that work is $4.32 million, with an option for more if required.

“It’s not only a Made-in-Nova Scotia solution but this is truly a Made-in-Truro solution,” said Jon Stanfield, the company president and fifth-generation leader of the family-owned textile company.

During an online video news conference, Jon Stanfield explained how Stanfield’s collaboration with another Truro firm, Intertape Polymer, led to the production of the polypropylene fabric used to make the disposable isolation gowns. The pattern for the garment was copied from a gown worn by an ER doctor who just happens to be a neighbour of Jon Stanfield’s.

The company CEO praised “the amazing cooperation of government” in helping get the product approved in only 10 days’ time, and underlined the importance of maintaining local supply chains, in good times and bad.

“We have to make sure in the future, as a result of what’s happened, that we have a level of domestic supply and readiness across the country,” he continued. “Because when borders start to close and supply chains go to zero, its difficult for a country our size when behemoths like the one south of us and European nations gobble up supplies.”

Stanfield says within its own Truro factory, equipment has been re-positioned and new sewing machines ordered to comply with physical distancing requirements required by Public Health. Employees will receive face masks and have their temperature checked twice a day, upon arriving for and leaving work. Bathrooms will be cleaned hourly. All machinery and surfaces will be scrubbed and disinfected between shifts, which will employ 72 workers each.

The company president acknowledged that many of its hourly paid workforce who’d been laid off are “older” and may not have wanted to expose themselves to the risk of infection by coming back to work at this moment.

Stanfield’s needs to run two shifts a day and one on the weekend in order to produce the number of gowns ordered. The company was able to recall 70 of its experienced sewers, only enough for one shift. Over the weekend, it posted a hiring notice on its website for 50 additional people, whom the company says it will train. Jon Stanfield now says the company is looking to hire between 72 and 108 new employees as the mill ramps up production into May. So far, the company has been “overwhelmed” with more than 500 applications.

“This is not just making branded products for Stanfield’s,” said Jon Stanfield. “This is supporting the health crisis we have in Canada and people stepping up and saying they want to be part of that. So, it won’t be a challenge finding the people. But we do have to get them trained as quickly as we can so they can hit the output level.”

The job pays $17 an hour, according to the boss, which is slightly above the average wage paid in non-pandemic times. Workers will each receive their own Yeti personal coffee cup but will have to bring coffee from home to avoid contact and prevent spread of COVID-19. Teams of nine sewers, or “Pods”, who meet their production quota will receive a daily bonus. Stanfield likened the situation in World War 1 when the venerable company’s employees cranked out woolen blankets to keep soldiers warm overseas.

“This time it’s a different kind of front-line battle,” he said.

Even with the Truro mill running seven days a week, the Nova Scotia company will not be able to supply the tens of thousands of weekly gowns without help from its “partner” companies who make branded products (including men’s and ladies’ briefs) sold by Stanfield’s. The Truro company is reaching out to their co-manufacturers — one in New Brunswick, one in Quebec, and four or five in Ontario — to boost production and employ a total of 180 people outside the province to make enough protective gowns.

“The future looked very scary for this company on March 15,” said Stanfield. “We were able to pivot, and these two contracts will provide us with a nice bridge to get through the crisis and see where the economy lies at the end of it.”