You are here: Home / Featured / Somebody bring that billionaire a drink: Morning File, Tuesday, October 28, 2014

Mike Savage is no Cabell Testerman.

Parkland Construction was charged with 17 workplace safety violations in the two and a half years before the death of Alan Fraser last year, the CBC reports. Fraser fell to his death while working on the roof of a six-storey building under construction in Clayton Park.

Four of the charges against Parkland related to the lack of guardrails or other fall-prevention measures. The company was fined a total of $4,400.

Halifax Mayor Mike Savage is defending the proposed change in the tax code to allow for a tax break targeted to benefit exactly one property owner: the Irving Shipyard. The CBC explains that:

The mayor says Irving argues their large new structure isn’t much good for anything but building ships — so the usual method of basing taxes on assessment will not work.

Savage went on to say that he’s frightened of the all-powerful Irvings, that if we don’t give them a tax break the billionaires will use their special all-powerful lawyers to file an all-powerful lawsuit to get an all-powerful judge to slap the city around a bit, and it’ll end up costing the city more than the tens of millions in tax revenue the shipyard will pay—to defend, ya know, a fair and consistently applied tax structure. I’m not buying it.

Remember all the hype about the benefits the shipbuilding program is supposed to bring? So far we’ve committed $20 billion in federal tax dollars in order to fluff Stephen Harper’s war-mongering ego. We handed the Irvings $300 million in provincial tax dollars so Darrell Dexter would have fodder for a sole-sourced PR campaign pumping his own failed legacy. And now we’ve got Savage foregoing a reasonable and consistent application of the tax code, like he’s a slack-jawed Appalachian county commissioner bowing down before the coal mine owner.

Actually, that’s unfair. Perhaps the best film about Appalachian coal mines is John Sayles’ Matewan, about the United Mineworkers of America struggle to organize the Stone Mountain Coal mine just outside Matewan, West Virginia. The movie is about so much more, but Sayles also tells the story of how Matewan Mayor Cabell Testerman had his existential moment of crisis: was he going to be a stooge for the company, or was he going to be his own man? In the end, Testerman stood up to the company’s hired goons and, well, now we have weekends, minimum wage laws, workplace safety rules, and all the other good stuff the unions have brought us.

Mike Savage is no Cabell Testerman.

Banal beer hooks up with banal clothing brand. Everyone will make millions.

Metro reporter Haley Ryan is being recognized with the Raymond Taavel Media award, for “her sensitive approach to issues of sexual orientation and gender identity, including stories of LGBTQ parenting and the murder of Raymond Taavel.” 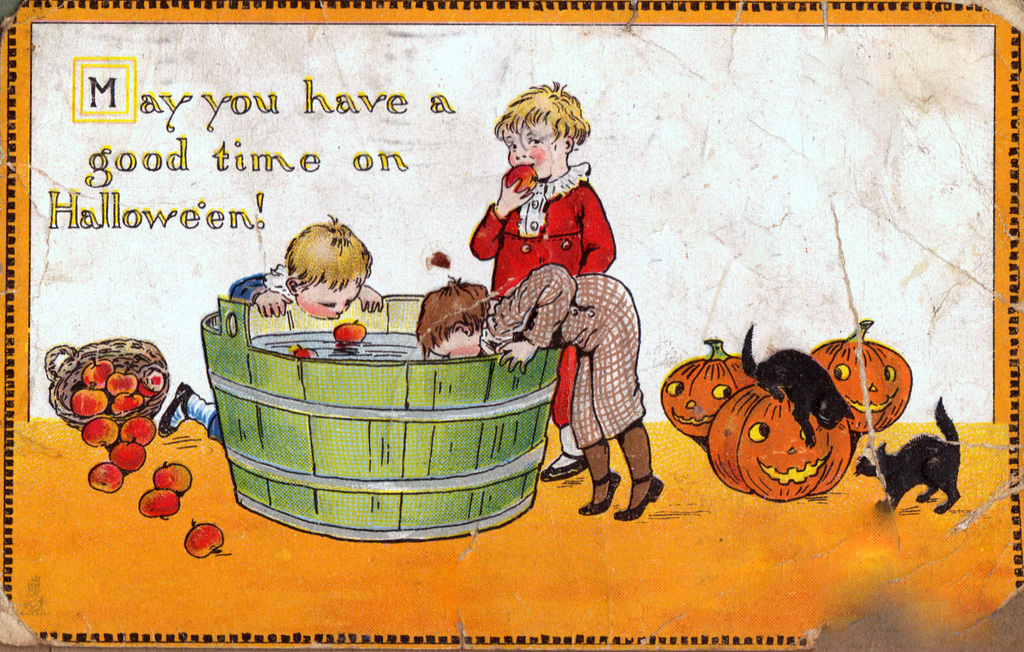 Stephen Archibald shows us a collection of Halloween post cards from the early 20th century.

The Internet: Do We Really Have No Privacy and Should We Just Get Over It? (Tuesday, 7:30pm, Scotiabank Theatre, Sobey Building)—Michael Geist, from the University of Ottawa, will talk about privacy on the internet.

Oil prices are falling. A lot. The falling prices fly in the face of all expectations. No one, left, right, centre, predicted this, and it’s hard to understand what’s going on and what the implications are for the global economy and for climate change. Journalist Andrew Nikiforuk, who may be the smartest and most informed person studying the energy industry,  has written a good primer on the issue. It’s well worth the read. 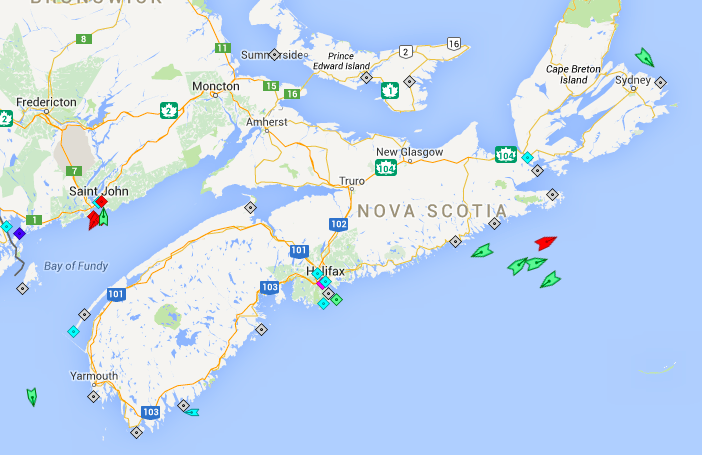 The seas off Nova Scotia, 6am Tuesday. Map: marinetraffic.com

The federal government is replacing the Princess of Acadia, the boat used for the Digby–Saint John ferry crossing, with the Blue Star Ithaki, a 12-year-old Greek ferry.

In the template I use for Morning File, I have some dummy text for this space that jokingly reads “navel gazing here,” so please forgive me for a bit of, well, navel gazing.

I’ve been working fairly intensely on something for the last week. I never know how these things will go, whether the time and effort put into it will result in anything at all, or if the end product will be of any interest to readers. We’ll see, I guess. Maybe it’ll be published later today, maybe tomorrow, maybe never if the lawyers throw a fit. But because I’ve devoted so much time to it, other things have fallen by the wayside, including answering a lot of email and writing a council preview. I’m terribly sorry about both, and I’ll try to catch up soon.

Moving forward, I have some plans to address these time and workload issues, but of course implementing those plans also takes time. It’s the curse of a small business owner.