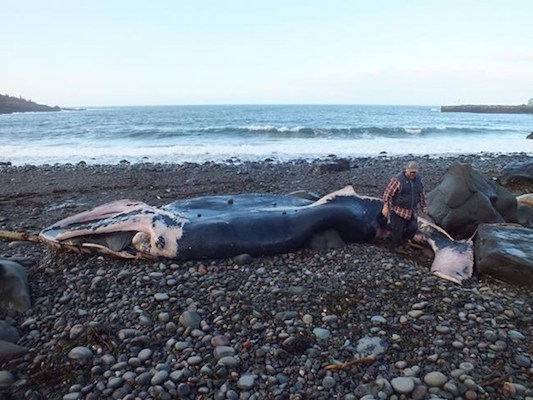 “A dead whale has washed up in the same area of western Nova Scotia that has seen scores of dead herring, starfish, clams and lobster litter the shoreline — but fisheries officials say it’s too early to say whether the deaths are related,” report Aly Thomson and Alison Auld for the Canadian Press:

Jennifer Thibodeau and her husband were driving past the beach on Whale Cove on Tuesday when they spotted what appeared to be a young whale, perhaps nine metres long, near the high water mark.

She said the humpback whale did not appear to have any external injuries that could easily explain its death.

Whale Cove is on the Bay of Fundy side of Digby Neck, while the recent fish kills were in St. Mary’s Bay, on the other side of the Neck: 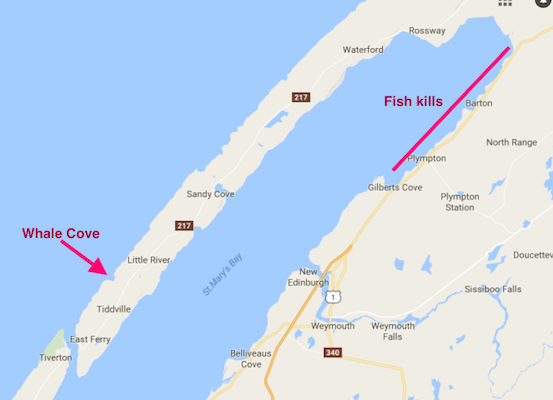 Meanwhile, “[f]ederal scientists are testing water samples and scanning images of the bottom of St. Marys Bay, hoping to determine what caused thousands of herring and sea creatures to wash ashore near Digby, N.S.,” reports Elizabeth McMillan for the CBC:

“It could be an intrusion of very cold water very rapidly, it could be related to a rapid change in salinity with the storms that have gone through … due to the sudden influx of fresh water, rain or runoff from the land,” [Kent Smedbol, manager of population ecology for the Department of Fisheries and Oceans (DFO) in the Maritimes] said.

So far, they have found no evidence of disease, parasites or toxins.

Work by the Canadian Food Inspection Agency, and Environment and Climate Change Canada to look for contaminants and by the fish health lab in Moncton has come back negative, Smedbol said.

When I wrote about the fish kills Wednesday, some readers took it to mean that I was linking these particular incidents to climate change. Looking back, I can see why they read it that way, but that wasn’t my intent — I learned long ago that when intelligent readers misunderstand me, the problem is mine, not theirs (but in my defence, you try writing coherently every day at 6am). Rather, I was trying to convey that our fisheries are important, and that we should be paying far more attention to them, especially in the wake of a fairly comprehensive, Pulitzer Prize-nominated piece of journalism that outlined the varied changes that climate change has already wreaked upon the Gulf of Maine. Like any given hurricane, we can’t attribute this or that fish kill directly to climate change, but we ought start getting worried.

But now that we’re into the weeds of the St. Mary’s Bay fish kills, readers have suggested at least two causes. The first — that they’re somehow related to the tidal turbine that has been dropped in the Minas Basin — is extremely unlikely, as the sites are 150 kilometres apart and if the turbine was killing fish in large numbers, we’d expect the dead fish to wash up somewhere closer than way down the Bay of Fundy and around the corner into St. Mary’s Bay. 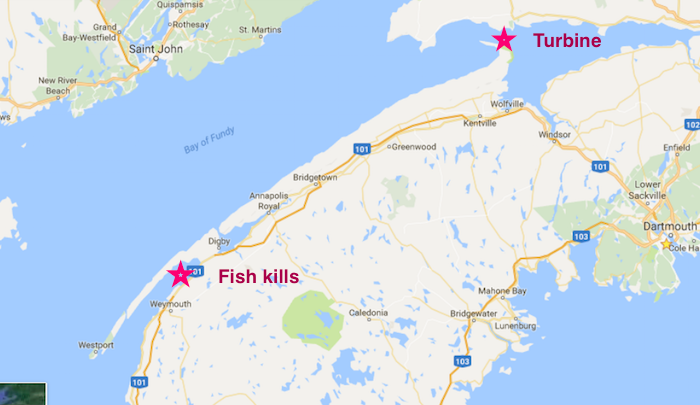 The second suggested cause of the fish kills — some sort of poisoning related to fish farms in the St. Mary’s Bay area — seems more plausible to me. Continues McMillan:

[Provincial veterinarians] haven’t found any signs the herrings deaths have affected the farmed fish, said Heather Fairbairn, a spokeswoman for the department.

The province also has not received any “recent reports from aquaculture operators in the St. Marys Bay area regarding fish escapes, accidental discharges of chemicals, or aquatic animal health issues,” Fairbairn said in a statement.

Hmmm. That doesn’t sound like much of an investigation.

Still, let’s let the scientists do their work, and we’ll see what comes of it. But no matter what the proximate cause of the fish kills, I think one take-away should be that our environment, including our fisheries, is extremely fragile and can be disrupted easily. That’s something we should pay close attention to, and we should do everything we can to prevent shocks to the system, including trying to avoid climate change. 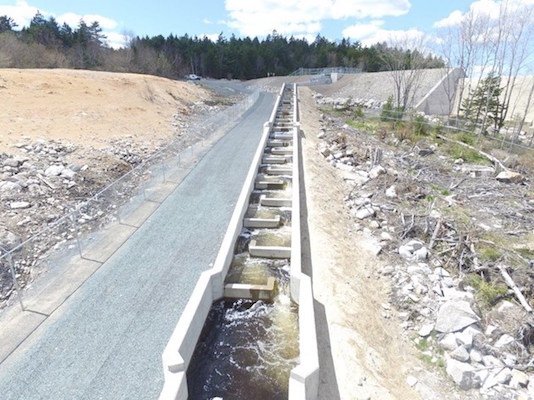 Speaking of fish, Nova Scotia Power reports that construction of the fish ladder it has installed around the St. Margaret’s Bay Hydro System on the Little Indian River, which connects Sandy Lake and Big Indian Lake to St. Margarets Bay, has come in a whopping $1.3 million under budget — from a budgeted $3,926,079 to an actual project cost of $2,610,980.

As Chris Lambie reported for Local Xpress earlier this year, the ladder is a huge success:

More than a century after the last gaspereau was spotted swimming in Indian River at the head of St. Margarets Bay, the little fish appear to be making a comeback.

“You never know how quickly fish will return. But, lo and behold, fish have returned and are starting to use the ladder,” Terry Toner, Nova Scotia Power’s director of environmental services, said Thursday in an interview.

NSP officials had been checking the fish ladder — the largest in the province — for two weeks. They’d seen speckled trout and smallmouth bass, but no gaspereau.

But on May 17, 135 years after a federal inspector noted the absence of fish in the area due to dams used to mill logs, a biologist with the utility spotted three gaspereau in the resting pools. Since then, they’ve spotted lots more gaspereau throughout the ladder, as well as speckled trout, smallmouth bass and a white sucker.

NSP hopes gaspereau will make it through the fish ladder to Sandy Lake. “Gaspereau would spawn both in rivers and lakes, but they seem to be fairly successful in lakes, whereas salmon tend to be more in streams.”

The reduced cost of the project are detailed in a report filed with the UARB earlier this month (see the report here). The bulk of the savings came in material costs:

The decrease of $838k in materials and contracts is largely driven by a reduction in concrete/formwork/rebar costs ($545k) as unit costs used in the third party estimate were significantly higher than received through the procurement process and a reduction in structural steel ($338k) which was a high level estimate of the amount of structural steel required in the third party estimate. The approved budget had a higher ratio applied to materials, however as charges were allocated, the majority of the work was contract labour.

Labour costs increased slightly (about $70,000) from the budget:

due to additional efforts in working with Environmental Services and Department of Fisheries and Oceans in order to properly plan this project. Additional engineering, site construction and post construction monitoring were also required in order to prove the success of the project as fish were not present in Sandy Lake in over 50 years.

The other big cost saving ($459,307) was simply the contingency fund, which didn’t have to be used because the project was under budget.

3. Drunk Gurl, the Koch brothers, and Boats to Build

On Thursdays I publish new company and society registrations. This week’s list consists of 27 entries, including this one: 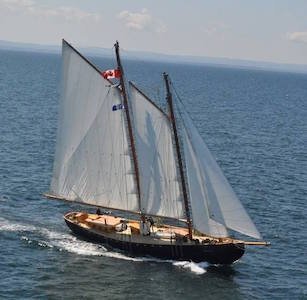 Evan and Nicholas Densmore, both in their 20s, were determined to launch the first ocean-going ship into the Stewiacke River since a shipbuilding ancestor did it in the late 1800s.

“[We] worked on it every day, sometimes on weekends,” Evan told Global News. “I’d estimate, between Nicolas and myself, we’ve got about 40,000 hours into it at this point.”

The self-described “hillbillies” worked on the vessel in a backyard shed behind an auto-body shop, scouring every available resource, including online auctions, for the vast array of components.

Their grandfather passed away recently, but not before helping them with the design plans, And the schooner was christened the “Katie Belle” in honour of their great-grandmother.

The Densmores have spent the past two years learning how to sail the schooner, and in sea trials up and down the east coast. They intend to turn the boat into a tourist attraction.

One crewmember, with the delightful Nova Scotian name of Chester Gourley, told CBC that the Katie Belle fullfills the dream of, yep, the Ivany Report:

“There’s Stewiacke boys on a Stewiacke-built boat. If that isn’t what the Ivany report is supposed to do, I don’t know what is.”

Gourley says he hopes the Katie Belle continues to be an example of what’s possible in Nova Scotia.

“You wouldn’t believe the amount of people that thought those two men were crazy,” he said.

“I hope government officials, businesses, just the common workers see that this can happen. Just put your head down and do it.”

My oldest brother has built several smaller boats [Moths], which he then sailed in competitions. Such handcrafts are beyond my two-left-thumbed capability, but I gather there’s an unparalleled self-satisfaction from the exercise:

Effective Friday, Dec. 30, 2016, Halifax Transit’s Lost and Found service, currently located at the Burnside Transit Centre, will be closed. It will reopen in a central kiosk at the Bridge Terminal in Dartmouth on Jan. 3, 2017. This relocation is intended to improve customer service by positioning the operation in a more accessible location.

The Lost and Found service operates Monday to Friday from 8 a.m. to 4 p.m. and is closed on holidays. There is no emergency service outside of these hours.

This makes so much sense.

I’ve never understood the appeal of this, but whatever… Shaina Luck reports for the CBC:

[Halifax Water] is in the middle of a pilot project that shuts off ultra-violet lights at the city’s sewage treatment plants over the winter in order to save money on energy bills. The lights are the final stage of disinfection. The treatment plants are still using all the other treatment processes for the period between Nov. 1, 2016 and April 30, 2017.

However, because of the annual tradition of jumping into the harbour for the “polar bear” dips, Halifax Water turned the UV lights back on for the last two weeks of the year.

1. Crapping on the sesquicentennial

Michael Lightstone rains on the parade:

Our country will turn 150 years old next July 1. Yes, Canada and this milestone are worth celebrating. No question. But spending $210 million countrywide on excessive revelry — beginning with a New Year’s Eve broadcast from Ottawa on CBC — is gross, especially when there are so many programs and services that could use the cash.

Hey man, don’t you remember the big bump in civics education we got from D-250? Well, OK, maybe not, but they had cool T-shirts (made in Haiti).

Everyone is still absent. 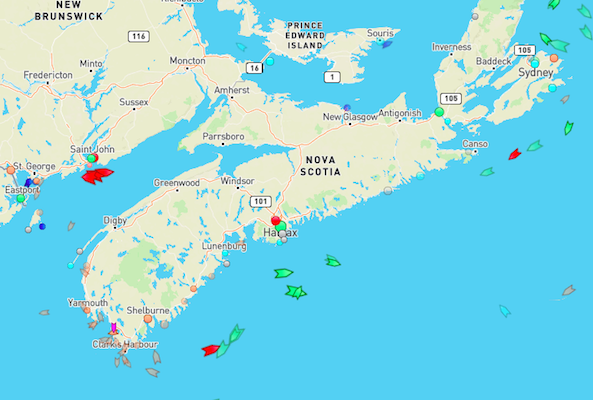