I was sitting at home when I got the community call-out for a solidarity action at the Canada Post on Almon Street on Sunday night. Since I live in the area, I decided to go down and see what was happening and join in to support the postal workers.

Across Canada, people have been protesting the back to work legislation and rallying outside postal facilities to block the mail in the place of the Canada Post workers who have been forced back to work.

At 6pm, the group met and split up, with one group going to the front of the facility on Almon Street, and the rest heading to the gates at the back.

“Thank you for centralization!” one protestor joked on the picket line convened at the back of the Almon Street facility, observing that now that the mail is consolidated into big facilities for the whole region, it’s more convenient to picket.

Within half an hour, it was pouring rain and freezing. Chants of “Nothing in, Nothing out! That’s what a picket line’s about!” and “We are ready for a fight! Workers have the right to strike!” rang out.

Half a dozen mail vans came up to the line and turned around. Handmade posters reading “‘Tis the Season for Solidarity” and “In Memory of Harry Leslie Smith” began disintegrating in the rain. Protestors put the signs on the gates, huddling together under umbrellas.

A phone was found with a charge that worked in the cold and Public Enemy, Rage Against the Machine, and old protest songs played through a speaker. All was peaceful and well.

As the rain came down harder, people moved their cars into the road, attempting to rig up a tarp between the cars to create some shelter. 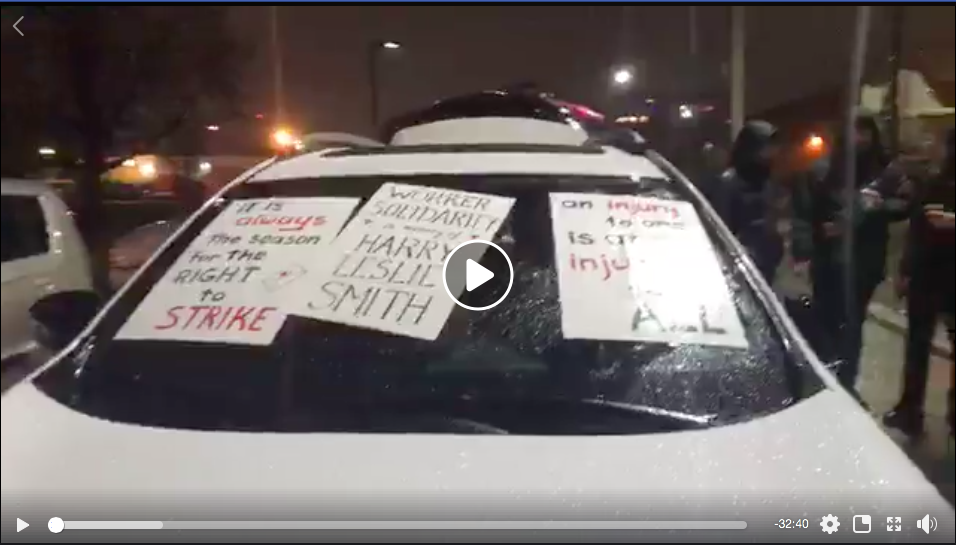 Supporters sent coffee and pizza to the line. Tony Tracy from the Canadian Labour Congress live streamed from the gates.

People on the line wished for a barrel to light a fire in. There was a discussion of how illegal a barrel fire would be. No barrels were forthcoming.

The real object of the line was the inter-provincial mail trucks scheduled to arrive at 8pm. Mail from across the region is sorted at the Almon Street facility.

As the trucks began arriving, so did the police. At first, it was one cruiser. Then another. Then the police vans began to show up.

The officers began discussing the situation with Tony Tracy. Threats of arrest began to be made if he didn’t co-operate.

The officer in charge got on the loudspeaker. “We want to negotiate” she announced. The police were joined by a man wearing a red coat, apparently the security head for the facility, and, I’m told, an ex-police officer himself.

She began by suggesting that people move their cars, under threat of seizing the vehicles for being abandoned. “That would be a good start, we can go from there,” she said. She pointed out that the cars were blocking entrance to the curling club.

A police van pulled up, and an officer opened the doors to the back in a clear threat. Do what we say, or we’ll arrest you.

The officer returned. She was accompanied by the man in the red coat.

We were informed it was a criminal code violation to block the mail. Some protestors asked the police to please cite the section of the criminal code. She became irritated. “Now you’re being a problem,” she informed us.

The man in red whipped out his phone, pointing to the apparent legislation that applied.

People at the back of the line began chanting again. “Nothing in! Nothing out! That’s what a picket line’s about!”

At some point the officer got back on the loudspeaker. “Just so you know, you’re wasting resources,” she informed us. “You’re taking police away from more important things.” Protestors invited the police to return to those duties. At the back of the line, someone responded, “That’s right, we don’t have enough officers now to go racially profile Black men in the North End.”

There were at least half a dozen police vehicles at this point.

The officer suggested that protestors show their solidarity by standing on the sidewalk and waving at the trucks as they carried the mail into the facility. The line rejected this suggestion.

The officers retired back to their vehicles for the moment.

People began walking back and forth on the street. “Nothing in! Nothing out! That’s what a picket line’s about!” At this point CTV had shown up and began filming.

The picket line formed on the street in front of the gates, with people walking back and forth chanting.

The officers advanced into the road, requesting that people move onto the sidewalk.

It was at this point that the arrests began. Tony Tracy was hauled off into the van. “Solidarity, Tony!” yelled the line. People kept walking.

“I don’t want to do this,” the police officer in charge told us. “I’d rather you show your solidarity another way.”

People declined to show their solidarity in another way.

At this point, my borrowed umbrella blew inside out. The officer sympathized. “Having some technical problems?” she asked.

More arrests were made. The picket line was gradually broken up as protestors were pulled from the line.

Those not arrested began singing the verses of “Solidarity Forever.”

Six people were arrested, and are being held overnight.

I was not arrested. I wondered if I were arrested it would count as a journalist being arrested, or if you stop being a journalist once you chant. But then do you start being one again if you write up what happened in an article?

“The trucks are backed up onto Young Street,” explained the officer. “It’s a safety issue.” Other safety issues also included the possibility of the ground freezing, and we were advised to drive safely on the way home.

“I didn’t want to do it like this,” the officer repeated. “I don’t like doing this. I wanted you to be able to show solidarity, just not like this.”

The safe way to show solidarity: stand on the sidewalk and wave at the mail as it goes into the facility.

The police vans departed, presumably to deal with the more important issues of policing put on hold while people in a road were being attended to by six to eight vehicles and a dozen officers.

The man in red ducked back into the facility, followed by boos and shouts of “Shame on you!”

And that is how the police were called by Canada Post security to arrest people and enforce back to work legislation.

Suzanne MacNeil, President of the Halifax-Dartmouth & District Labour Council comments to The Examiner:

We were having a peaceful picket in solidarity with postal workers. Since the Trudeau government passed strikebreaking legislation, it is imperative that every worker needs to see this as their fight, too.

Postal workers have always been at the forefront of the fight for better working conditions, pay equity, parental leave, and other important rights. We can’t let them stand alone.

And that, Examiner readers, is how I spent Sunday night, in the rain, with police officers arresting people for standing in the street. Which is, according to the officers, a criminal code violation.

It was all-too-Canadian. The cold, the Tim’s coffee, the parkas, the police being polite while they arrested people for exercising their rights, the public that supports stripping workers’ rights because there might be letters for Santa in those vans. And the general indifference while the police are authorized to use force to break the strike and keep breaking it, all while we celebrate being a kinder, gentler country than what we see happening under Trump. 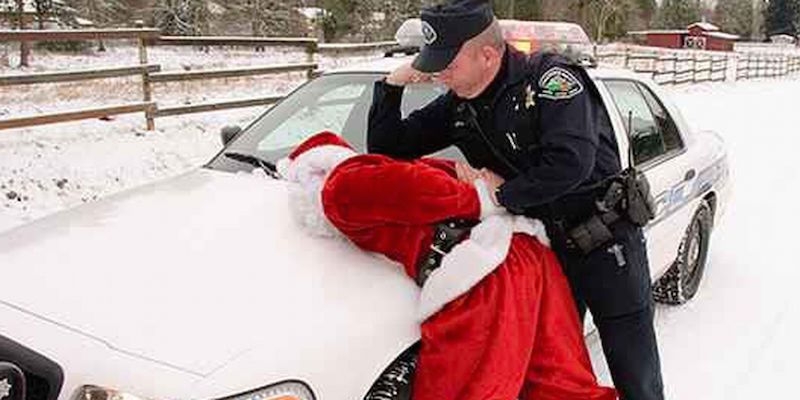