You are here: Home / Featured / Should the Clarmar Residential Care facility be closed permanently? 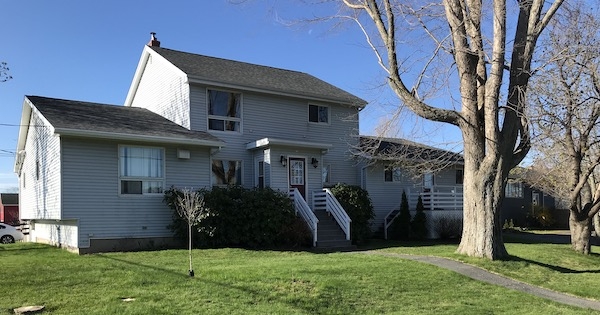 Clarmar Residential Care facility is closed temporarily. But should it close permanently?

Last Tuesday, the Halifax Examiner reported the home, which cares for physically and intellectually disabled adults, was the only one in the province where two residents as well as two staff had tested positive for COVID-19, despite vaccines having been offered by the province.

Annual inspection reports for the past three years, including 2020, show the licensed 24-bed facility repeatedly failed to address issues around documenting and distributing medication to residents and had “no active program” for the prevention and control of infectious diseases.

By Friday of last week, Chief Medical Officer of Health Dr. Robert Strang told journalists during the regular COVID briefing that the Clarmar Residential Care facility had closed after a total of three staff and three residents had tested positive. Residents had been safely moved, Strang said.

Dave MacQueen was listening to that briefing from his home in Cape Breton. His brother Ian “Hoss” MacQueen has been a resident of Clarmar for almost 10 years as a result of chronic ill-health associated with alcoholism. Where, wondered Dave, was Hoss living now?

Dave has power of attorney for his brother. He picked up the phone and began calling the one telephone number that is listed for the Clarmar Residential Care Facility at 200 Main Street in Dartmouth.

Nobody answered. There was no recorded voice mail message to provide any further instruction. The Clarmar website contains no other phone numbers or even an email address. MacQueen spent the weekend dialing that one number and hoping Clarmar staff or someone from the Department of Health would call to tell him where Hoss had been moved. That didn’t happen.

The Clarmar Residential Care facility is owned by Margaret Dorey. The Examiner left a message on the voicemail for the only listing for Margaret Dorey in HRM. (Until Clark Dorey died in 2019, Clarmar had been owned by the husband and wife team of Clark and Margaret Dorey.)

By Saturday night, Irene MacQueen, who lives in Ottawa and is a sister to both Ian (“Hoss”) and Dave, said she was “concerned and worried” about being unable to contact her brother. She emailed the Examiner to say she was in the habit of telephoning and speaking with Hoss several evenings a week but she had not made contact with him for two weeks, since the current restrictions have again made virtual prisoners of thousands of long-term care residents in the province.

“I called around April 26 and was told he couldn’t come to the phone because he was in lockdown in his room due to new restrictions placed by the Province of Nova Scotia,” said Irene. “Hoss shares a small bedroom with another resident. I didn’t realize at the time there was a breakout in the facility. I was told the only time he could leave his room was for smoke breaks and bathroom breaks. They were not allowed to use the phone because they only have a shared landline for the residents. I asked if there were TVs in the rooms and they said his roommate had one. I know that Hoss has a radio. I was in his bedroom six years ago and I couldn’t imagine being locked up in that space for two weeks.”

Irene said she called Clarmar several times between April 26 and May 4 and spoke with staff. Eventually, they confirmed there were positive COVID cases. Irene said she was told her brother had tested negative and would be tested again. She was unable to speak with Hoss and has been in telephone contact with her brother Dave in Cape Breton as they tried to locate him.

On Monday, May 10, the Examiner called the Department of Health and asked, (a) what should the family do to locate their brother? and, (b) whether Clarmar would lose its licence for failing to contact the family of one of the residents?

I received this response on behalf of the Department of Health (which is understandably busy during this time) from senior communications advisor Heather Fairbairn:

Due to staff shortages and to reduce the spread of COVID-19, residents of the Clarmar residential care home in Dartmouth have been moved to alternative sites where they will continue to receive the required care. Comprehensive protocols are in place and all appropriate measures are being undertaken to protect residents and staff while reducing the spread of COVID-19. Family members with questions should contact their Continuing Care Coordinator.

By Monday, Dave MacQueen had found and called the number listed on the Department of Health website for the Central Zone Continuing Care coordinator. He left a voicemail message explaining his request and asking for someone to call him back. Unfortunately, he was briefly separated from his phone that afternoon when his call was returned. He called back and received another call today from someone who identified themselves as “Patient Relations for Nova Scotia Health.” The caller said Nova Scotia Health (the entity that operates the home care program for Continuing Care but is not responsible for long-term care residences such as nursing homes and residential care facilities) could not assist and to contact the home itself for more information.

Dave was by now both frustrated and confused. Back to square one. He was unaware the Department of Health & Wellness — which licenses and regulates long-term care homes, both those privately owned and non-profit — is separate and different from Nova Scotia Health, which provides home care and nursing support for people in their own homes but not for those living in adult residences. Dave called Shannex and Admiral long-term care facilities in Dartmouth to see if they have admitted his brother. No luck.

Then a break came through a scan of the Directory of Long-Term Care Homes in Nova Scotia — licensed by the Department of Health & Wellness — dated April 2021. Unlike Clarmar’s website, this online government directory does contain an email address for the facility. It is [email protected]. Both Dave MacQueen and I immediately emailed to ask “where is Ian MacQueen?”

Dave MacQueen called the Examiner within 10 minutes of emailing the home. He finally had a call from the administrator, Crystal Johnson. Johnson apologized for being unable to reach him, saying the home had the wrong area code on file for him. (That’s despite the fact Dave had called the home’s number several times over the past several days and Clarmar staff were also familiar with calls from Hoss’s sister Irene). Dave wasn’t sure whether he bought the “wrong number” explanation. But he was both relieved and grateful to get the name of the home where Ian and other residents who tested negative are currently staying.

Dave said the Clarmar administrator indicated the move is temporary and the home at 200 Main Street in Dartmouth expects to re-open in a couple of weeks.

Dave said Crystal Johnson insisted that “for reasons of confidentiality” he must not tell the media where is brother is living today, that the media have even tried to contact the home’s owner. MacQueen agreed to that request, even though there is no apparent reason why he can’t choose to go public with what is a fact. And information he searched for days to obtain and as power-of-attorney for a vulnerable person is entitled.

Dave told the Examiner he is grateful for our help but he is afraid Clarmar won’t continue to look after his brother in the future if he breaks his word about his brother’s current re-location.

For the MacQueens, this saga finally appears to have a happy ending.

“I can’t imagine how lonesome and confused Hoss must be feeling,” said Irene MacQueen on the phone from Ottawa Monday night. “I just want to be able to talk to him again. I’m ready to call Missing Persons if we don’t hear something soon.”

Indeed, the whole handling of this affair raises troubling questions about whether the closure of Clarmar should be temporary or permanent. That decision will be up to the Department of Health and Wellness, Continuing Care division, for which restrictions during this third wave have created new challenges explaining to vaccinated residents why they aren’t allowed to see their families.