The Irving-owned Acadian left Amsterdam fully eight days before it arrived in Dartmouth.

“A gas shortage that caused headaches for drivers across the province this weekend was thanks to a late marine shipment, according to Imperial Oil,” reports Metro:

MacIsaac said two vessels bound for the Dartmouth terminal came in at the end of last week and over the weekend, which was later than expected.

He would not comment on when the boats were originally supposed to land.

I’m calling bullshit on this.

This is not the 19th century, when no one knew what ship would show up in the harbour on any given day. Back then, even people in the shipping industry couldn’t tell you when any particular ship might return to port with any closer precision than a week. A ship could be delayed by a storm, or lack of wind, or labour strife or a customs battle at some far-away port… who knew?

Since then, however, the industry has advanced. First with radio, then with detailed weather reporting, and then with GPS tracking, we now know where every ship on the planet is at any given moment, where it’s heading, and at what speed. Unless a ship is attacked by pirates or a freak wave destroys it, there are no surprises. Ships do not show up “later than expected.”

In the case of Imperial Oil, the two ships in question were Acadian and Beryl.

Acadian is Irving Oil’s flagship tanker, operated by Irving’s shipping company, Kent Line LTD. On August 11, Acadian left Gibraltar. It arrived in port at Ijmuiden, Netherlands on August 18. On August 20 it sailed up the North Sea Canal to Amsterdam, then back to Ijmuiden, and then began its journey across the Atlantic. So Imperial had eight days notice as to when it was leaving for Dartmouth. And its entire journey was observable. Seven days out, Imperial could know exactly where the ship was. Five days out, it could know exactly where the ship was. One day out…

Beryl is operated by Montreal Marine Services. On August 26, Wednesday, the ship left Saint Jean, Quebec for Dartmouth. It’s possible that this was later than expected, but again, Imperial should have known at least three days before the gas shortages that it was delayed.

I simply can’t believe that Imperial didn’t know until Friday that it would face a gas crunch over the weekend. It’s not a credible argument. If, as Imperial spokesperson Merle MacIsaac claims, the shortage is due in part to Acadian showing up late, then the company had at least eight days’ warning of the delay. That’s eight days when it could have found a different source of gas, or eight days to increase output from the Irving tanks in Saint John.

I don’t know what the true explanation for the gas shortage is, but it’s not because the ships were late. I’m not inclined to join the conspiracists who think that Imperial engineered a shortage because of dramatically falling gas prices — prices will likely fall still more in coming days, so it’d make more sense to try to sell off as much gas as possible sooner, and not to run out.

A better explanation for the gas shortage is simple ineptitude.

But the shortage shows how vulnerable this province is to economic disruption because we overly rely on imports. A minor ship mishap at the oil dock in Dartmouth could cut us off from gas for weeks at a time. A Category 2 hurricane making its way up the Bay of Fundy at high tide could destroy the rail and highway links through which most goods come to Nova Scotia.

The “just in time” delivery philosophy — in which companies plan to store as few goods on site as possible, relying instead of precise delivery timetables — works until it doesn’t, and then we’re facing a crisis.

There are no reports of anyone dying because their ambulance didn’t have fuel, but had the shortage gone on a few days, that’s the kind of scenario we would’ve been facing all over the province.

Police continue to search for the body of Taylor Samson, the Dalhousie student they say was murdered last week. Over the weekend, police announced that they had “located items last evening that investigators now believe may be connected to the homicide of Taylor Samson,” and yesterday police expanded their search to property behind the Truro Mall. 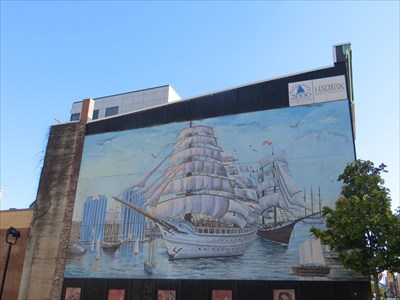 Jeremy Smith, who owns Freak Lunchbox, wants to take the “tall ships” mural off his building and replace it with something “more modern.” The mural was painted by Zeqirja Rexhepi in 2000.

Smith’s desire to have a new mural on the building created a big uproar on social media over the weekend, and a last-minute “Save the Halifax Tall Ship Mural” gofundme campaign, but it was too late, reports the CBC:

“Unfortunately the family of the artist contacted the media on Friday, well after my plans were in place. I have had lifts and painting crews booked for tonight (Sunday) and tomorrow for weeks now. I personally offered to remove the mural for them three weeks ago (August 11) and had no response whatsoever,” Smith told CBC News in an email.

According to a series of emails Smith sent CBC between himself and the Rexhepi family, Smith sent an email to Rexhepi on Aug. 11.

“Before we proceed, we are offering it to you. I have a quote from our contractor, Castone Construction, to remove it; though it seems quite high at $3,500. I am sure you can find someone to take it down for less money,” read the Aug. 11 email.

“At this point we are hoping to start painting in September. If you are interested in keeping the piece I would appreciate your notice within the next few weeks. If there is no interest in saving it we will paint over it as a cost-saving measure.

The family of the artist didn’t get back to Smith until Friday. By that time he had already lined up a new artist to paint over the mural on Sunday. Presumably, the old mural is gone today, but I haven’t seen it so can’t say for sure.

From this morning’s end-of-shift email from police to reporters:

At approximately 11:35 p.m. Halifax Regional Police responded to a residence in the 3000 block of Windsor Street. Officers located a 24 year old female suffering from multiple stab wounds. Containment of the area and a K9 track were initiated. Shortly thereafter, a 19 year old male and a 20 year old female were located in the area of the 300 block of Robie Street, questioned and taken into custody. The Halifax Regional Police Forensic Identification Section and members of the Integrated General Investigation Section were called out to further the investigation. The victims condition remains serious, but stable at this time.

The city will soon peddle every corner of the soon-to-be former Canada Games Centre (“Your washroom stall sponsored by Pete’s Plumbing!”), each pad of the new Dartmouth four-pad arena and even the air that will carry the wireless for the proposed downtown public Internet.

But… how did governments get so cash poor, and corporations so cash rich?

Over the years, we’ve cut corporate taxes, squeezed public services and enabled the rich to decide whether to fund, for example, a named business school, or a no-name social work school.

As I’ve stated before:

I know that many readers find nothing wrong with selling naming rights — hey, why turn down corporate money! — but this is part of an insidious reshaping of our society, which sees every aspect of life “branded” by corporations. The damn telephone company claims to own addressing mental illness. A bank throws its name on the Metro Centre in return for new seats. The monopoly that controls the electric company names the oval, and on and on and on.

These are public facilities, built with tax dollars. By naming them after corporations we are giving up the very idea of the public realm, where facilities are built and operated in the public interest, with public money, for the public, by the public. The very word “public” loses its meaning. The collective citizenry becomes atomized customers; we no longer have shared purpose or common interests and responsibilities. Our only relationship with our government is as a customer purchasing services, and like all good customers in the modern economy, our only interest is the immediate price — forget quality, long-term costs, or dog forbid such social concerns as environmental stewardship or a living wage for the people providing the services. And because we are concerned only with the immediate cost, we want a reduction of tax payments by any means necessary, and if that means selling off our literal collective soul, so be it.

Every time we brand a public facility with a corporate name, we lose. We can’t place a dollar value on the loss of the public realm, because it is priceless. A few million dollars gained here or there in return is nothing in comparison.

To the Port Hawkesbury Reporter (in response to this story published last week):

How deeply ingrained animal killing is in our culture.

A legacy of colonialism? We’re bigger and stronger (and smarter?) so we dominate and control all that are less than us. This false idea of superiority allows us to do things like this. Questioning the dominant culture is almost treasonous. We’re in the midst of the anthropocene era now, that’s for sure. The planet and all of nature quivers at the vibrations from our giant footsteps.

One thing I know, there is no way to humanely kill someone who didn’t want to die.

Non-human animals are someones. They are not some-things, to be used however people in this selfish, short-sighted homocentric culture deem to be okay.

This shark killing is normalized, and this unnecessary killing is justified by saying it’s ‘research’ and ‘charity,’ but less invasive, non-killing research can be done. The Petit de Grat campus of Université Sainte-Anne is raising money in this manner but there have to be better ways.

I can think of so many other ways to enjoy the ocean and a day with family than going out and competing with others to kill some animals. 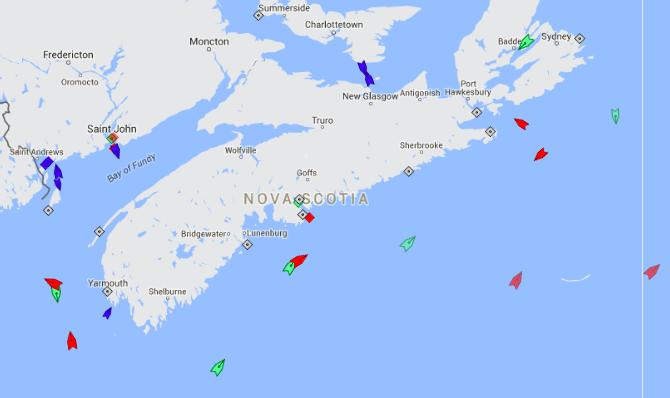 The seas around Nova Scotia, 8:35am Monday. Map: marinetraffic.com

Too many young people dying.