You are here: Home / Featured / Sheree Fitch’s new podcast offers some “narrative medicine” in a time of COVID-19 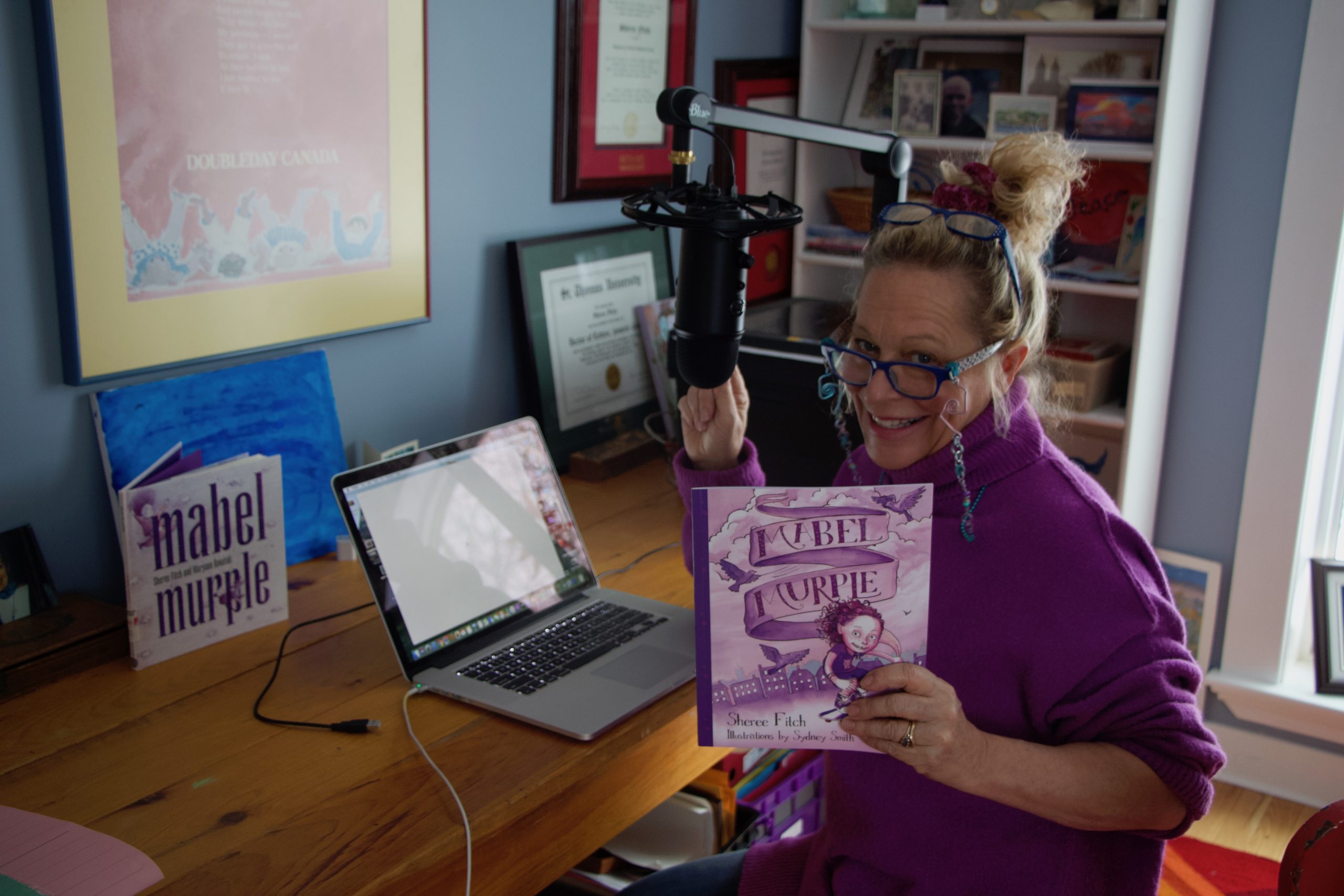 Sheree Fitch is a multiple-award-winning poet, author and literacy advocate known and loved around the world for her tongue-twister-filled children’s books such as Mabel Murple and Sleeping Dragons All Around. She once dreamed of a very different life. When she was in high school, her goal was to become a paediatric nurse or doctor, so she could be of use during a health crisis like the one gripping the planet today.

But, as she told the Halifax Examiner in a phone interview from her home in River John, her life went in a very different direction. She became a teenage mother of two boys, and then a single mother after divorcing when she was 24. After that, she headed back to school to study English literature, and then received an MA at Acadia University. Her thesis title, “The Sweet Chorus of Ha, Ha, He!” Polyphony in utterature: A collection of writings on children’s poetry, hinted at things to come in Fitch’s own literary future as a devotee and writer of nonsense poetry. Her first book, “Toes In My Nose” published in 1987, was followed by a long string of best-selling children’s books.

“In a world that makes no sense to me, making nonsense makes sense,” Fitch said.

Fitch has also authored award-winning poetry and prose works for adults. She told the Examiner that in recent years, she has had her “fair share of challenges.” In 2017, her husband Gilles Plante was diagnosed with Alzheimer’s. The next year her son Dustin died at the age of 37, and Fitch wrote about her struggles in the wake of his death in her 2019 book, You Won’t Always Be This Sad – A Book of Moments.

Now, spurred into action by the COVID-19 crisis, Fitch has begun a podcast that is available on voicEDd Radio, which she hopes will be useful for parents and children cooped up in their homes. She sees it as “narrative medicine.” The interview has been edited for length and continuity.

Halifax Examiner (HE): I understand you never planned to do a podcast. How did your new podcast, Mabel Murple’s Popping Purple Wordspinning World, come about?

Sheree Fitch (SF): I think it was serendipity. I had an email come in my email box the day after I had very awkwardly — not knowing what I was doing — tried to audiotape myself doing a poem, figure out a way to upload it and then download it, and then maybe post it. I didn’t know what the hell I was doing, and when I did kind of figure it, it just sounded shabby. And one thing I wanted was that it be useful. People are reading stories and doing YouTube things [because of COVID-19]. I didn’t want to be seen. For me, poetry is an oral tradition. Anyway, I don’t want to traumatize kids [laughs]. I’m 63 now; I’d scare the hell out of them if they saw me in a YouTube video.

So I wanted it to be audio, like when I was growing up, and we would gather around the radio every Saturday morning and listen to a woman on CKCW in Moncton who would read The Selfish Giant or The Three Billy Goats Gruff. I always loved the marriage of radio and poetry, radio and story. If I was going do anything, I’d do audio. So I frigged around with it, but it was shabby, and I wasn’t going to do anything that wasn’t good. The next day I get an email from this man [Stephen Hurley, founder of voicED Radio] saying, “I’m going to interview some Canadian children’s authors and talk to them about their work and where they work. And we’re going try to get some stuff out there into the ether while kids are at home and can’t be in school. So, would you be interested?”

I wrote him back and said, “Oh yes, of course I would, and funny that you emailed, because just yesterday I was trying to figure out how I could do a little audio recording of some of my books.” He wrote back, and said, “I’m your man! Let’s do it.” So that was the partnership that was born. It was a serendipitous thing. 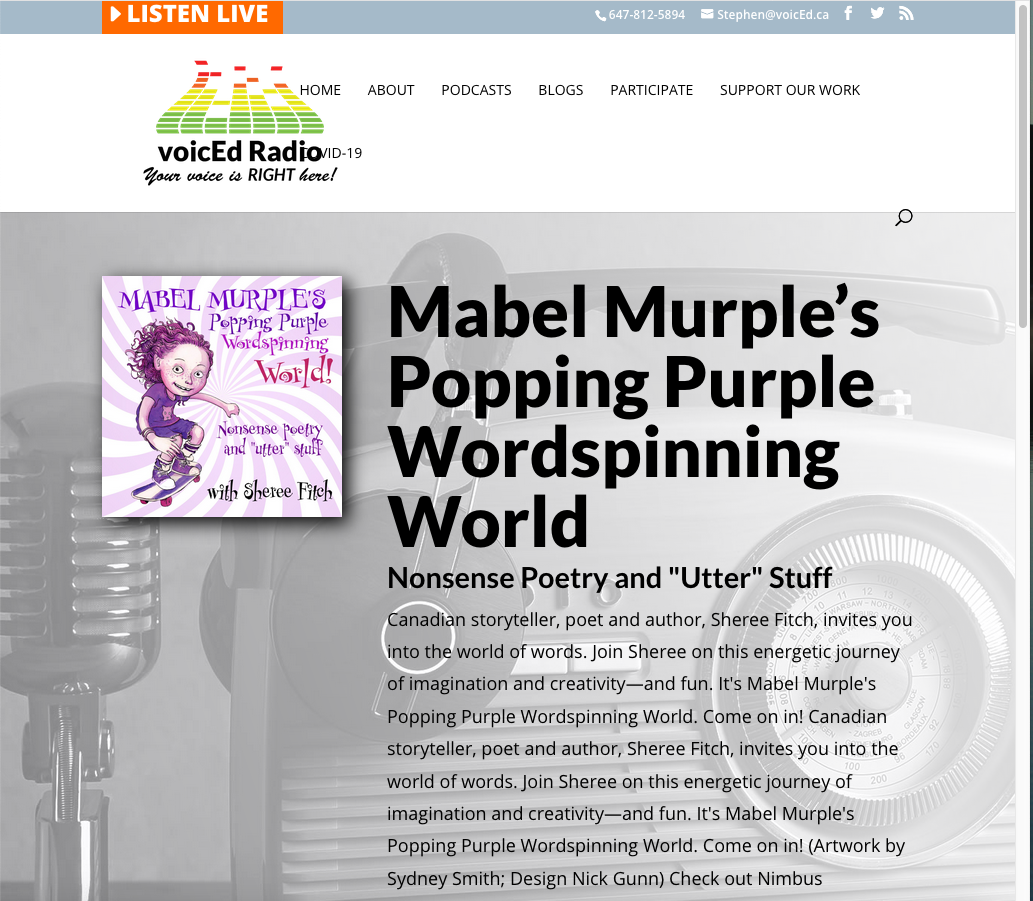 HE: So far, you’ve produced two episodes, one called “Come Play in the World of Language” and the other “Sleeping Dragons All Around.” Can you tell me what the podcast is all about, what you want it to be?

SF: Well Stephen said he thought just telling stories would be great. So this morning I recorded four more, so he’ll put one out every two or three days until I run out of material. I’d also like to take things that are in the public domain, read some old nonsense poetry.

We want to keep it about ten minutes, and it should be kind of like when I go into schools [to read and speak]. I would like to keep the emphasis on poetry and story, with poetic storytelling. And I tell the story behind the story of why I wrote the story, because that shows people that I am not some other-worldly creature; you can use your imagination and when something happens on an ordinary day, it can be an idea for a poem or a story.

It’s an invitation to your own creativity and imagination – not so much writing prompts, but creativity and imagination prompts. And just to get people maybe splashing and click-clanging with all those syllables. It’s fun. It’s joyful. It makes your heart glad. It’s like I said in the first episode, and I believe this with all my heart: you cannot say “snickerknickerbox snickerknickerbox” without something kinaesthetically happening in your body. It’s something you can almost taste and it’s something that you can celebrate language with. And to me, [it’s about] getting infected with the joy of language and not thinking about any other kind of infection right now.

It still makes my heart glad to write nonsense, and [it gives me] a lot of joy to recite it. Right now, I was supposed to be at the Ottawa Children’s Verse Fest, and being with classes. And tonight I was supposed to give a reading from the adult book, and tomorrow I was going to do a morning thing at the library. And since I can’t do that in person, it feels good to be storytelling this way.

It’s now 33 years since Toes In My Nose was published, and I’ve been poem-telling my whole life. This podcast is an opportunity to do it in a different medium, and the only reason I’m doing it — and I never thought I would — is because of this damn pandemic. 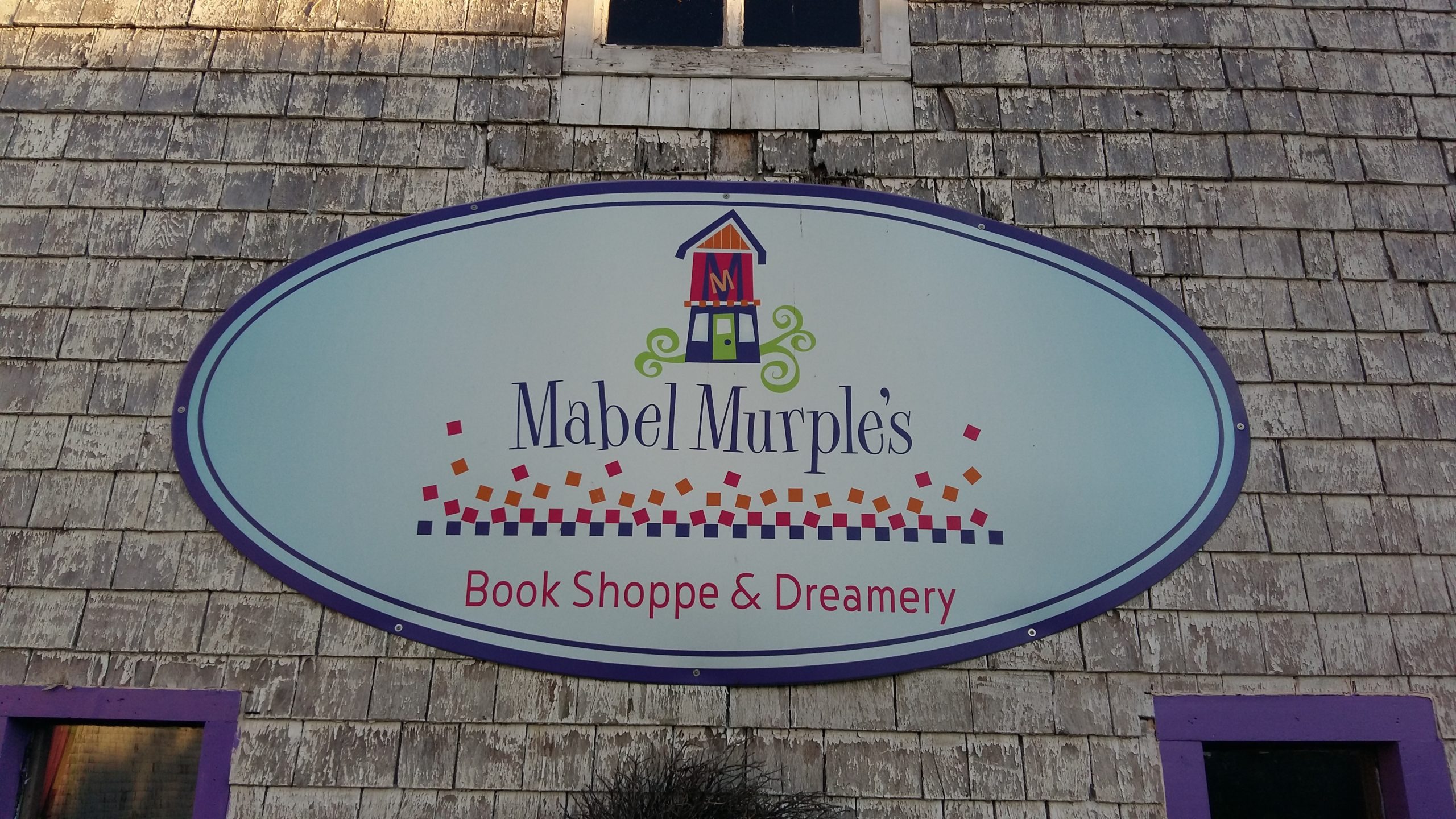 Since 2017 Sheree Fitch and her husband Gilles Plante have been running Mabel Murple’s Book Shoppe and Dreamery from July to September in River John, NS 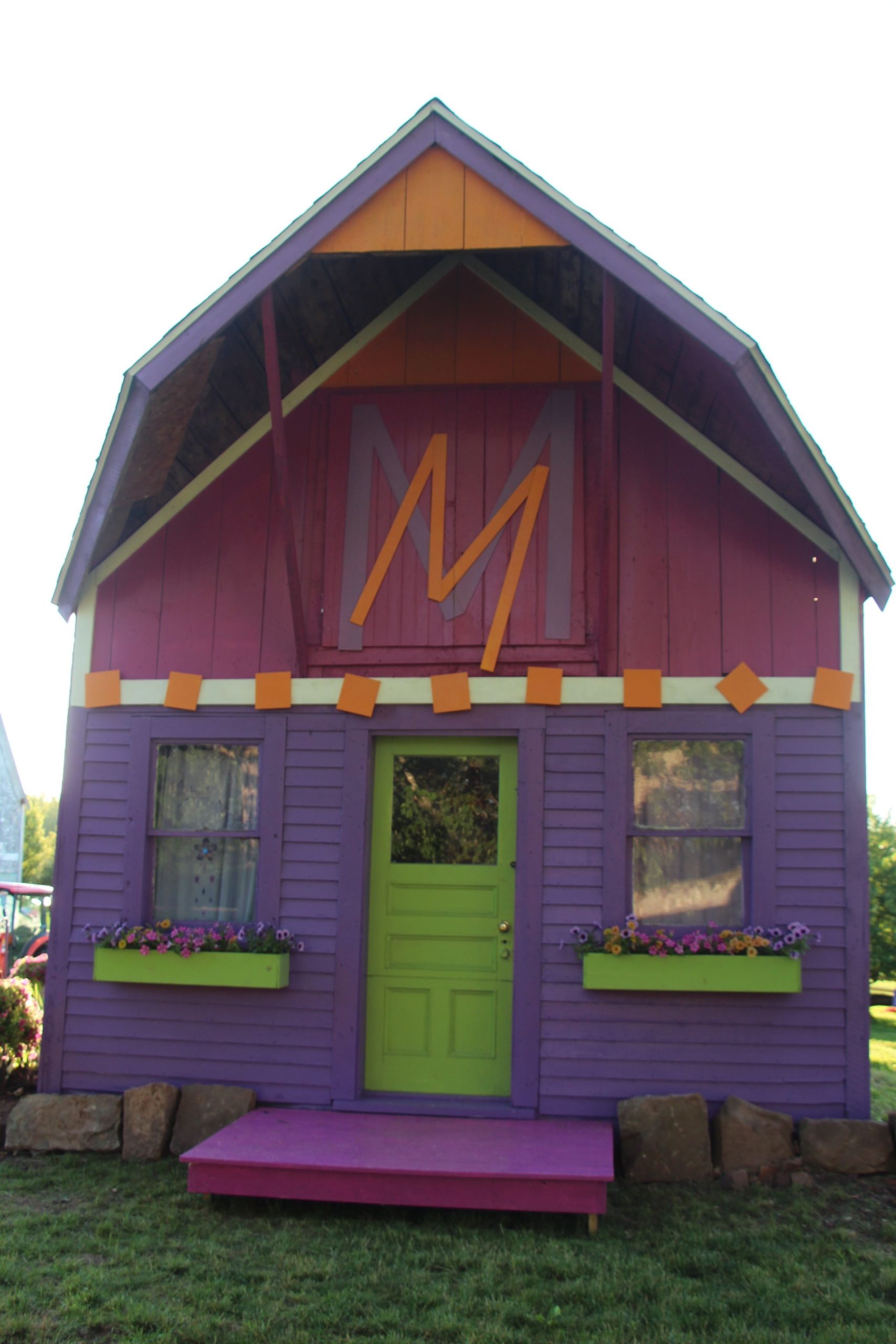 HE: So the podcast is a direct result of the COVID-19 crisis?

SF: It forced me to find another way to do what I do. This started right at the beginning when people were realizing that the schools were closing down, the first week in March maybe, everything has blurred in the last couple of weeks. It was all brought on by the pandemic. This never would have happened. I mean, a couple of people have said we should record the poems, and at one time I had my poems on cassettes. And then this opportunity came along and my publishers all said, “Go fill your boots, take your work and get it out there on a podcast, Sheree. These are extraordinary times.”

I don’t know how long I’m going to do this, but the good thing is that once the podcasts are uploaded, then you hope that if parents are really desperate, they can just click and listen to Sleeping Dragons All Around, and they won’t have to read it.

I’m thinking of my grandchildren at home with their moms, and all the parents who are home with their kids. And days are probably quite long for a lot of those parents. I think screen time has to be limited, so this is kind of an old-fashioned gathering around your radio and you don’t have to look at a screen. Just make the pictures in your mind, and maybe draw your own dragon. I just hope it’s a point of departure for everyone to have a piece of joy and a distraction from the real world.

HE: Who do you picture as your audience as your record the podcasts?

SF:  I don’t have a focus audience. My audience is teachers who might have students they want to send them to, or parents at home with their kids, and it’s the kids. I don’t have a focus audience because it’s inter-generational. I truly believe that nonsense can be for people between the ages of two to 102. It’s not everyone’s cup of tea. But it’s my magnificent obsession, for my whole life. I had a language-rich childhood.

HE: How are you coping with the isolation and uncertainty of this crisis? Is the podcast part of your own coping strategy?

SF: It’s been nice to have a very immediate project to focus on. But there hasn’t been one time in my life, not one tragedy or crisis that would come when I wouldn’t look at [my husband] Gilles [Plante] and say, “oh, if only I were a nurse or a doctor right now, I could be of so much more use.”

I am in awe of nurses and doctors; they are my super-heroes. Teachers are too, I have to say. But those frontline workers, I look at them and long to be of more use in a time of crisis. I guess I’ve learned there are different ways of administering medicine, a different kind of medicine. Maybe mine is narrative medicine. We all need to feel like we can be of use, especially when we feel so powerless and helpless. And like everybody else, I feel powerless. So if I can provide a little bit of distraction and a little bit of joy for even 100 families, I’m happy with that.