Last week, Joe Ramia announced that he had poached BMO as a tenant from the Thiel family, who currently own all of the bank towers downtown. BMO’s offices are now located in the Thiels’ George Street tower, but the bank will move into Ramia’s Nova Centre project when it’s completed late next year.

Who are the Thiels? Here’s how the family described their love affair with Nova Scotia a few years ago:

From the first moment the Thiel family set foot in Nova Scotia, they knew their future would be inextricably intertwined with this place. After a vacation here in 2000, they quickly bought property on a lake in Shelburne County, and built a beautiful log home there. Their frequent visits soon led them to an even greater appreciation of the province, its natural beauty and the people who live here, and the family soon began looking for opportunities to invest in Nova Scotia’s future.

They discovered the boundless potential for development in downtown Halifax, and concentrated their efforts there. Between 2001 and 2003, the Thiels bought several iconic commercial buildings, including the Royal Bank Tower, the BMO Tower and the TD Tower. Their vision is to develop those buildings and the surrounding blocks downtown to their fullest capacity as a long-term investment for the city, the province and all Nova Scotians. The proposed rejuvenation of the TD Centre is an opportunity for the family to work with HRM to build a new piece of Halifax.

Since establishing themselves here, the Thiels have brought their passion for art to the province, and combed auctions around the world to make several generous contributions to the Art Gallery of Nova Scotia (AGNS). They have since been recognized by the AGNS’ Honourary Governor for their exceptional support of the AGNS, the community and the province, and Halifax-based Wolfgang Thiel continues this support on his family’s behalf.

Formerly of Trier Germany, Wolfgang Thiel is a director of TDB Halifax Holdings Limited, the Thiel family company that owns the TD Centre. Wolfgang is overseeing the project and resides in Halifax with his wife, son and “Blackie” the dog.

At the time, Ramia and the Thiels were in something of a construction race, with Ramia looking to complete Nova Centre before the Thiels could complete a reconstruction of the TD Centre and the construction of a new building to be called 22nd Commerce Square. But in the zeal to get a new convention centre built as part of the Nova Centre project, the province passed special legislation allowing Ramia to bypass normal city building regulations in order to fast-track Nova Centre construction, thereby beating the Thiels to completion. This in turn gave Ramia the upper hand in luring BMO up the hill.

The Thiels cried foul and sued the province. The Thiels weren’t looking for money, but rather just a court ruling saying what the province did was improper and such an end-run around regulations left them in no position to compete on a level playing field. How can they be sure their 22nd Commerce Square project can be treated fairly?

The court rejected the Thiels’ argument. The Thiels appealed the dismissal of their suit to the Supreme Court, but it was also rejected there.

Monday, I asked Tim Winchester, the spokesperson for the Thiel family, whether the Thiels have any response to Joe Ramia poaching their tenant, BMO, and Winchester sent along the following statement:

We have been aware for quite some time that BMO intended to relocate no later than April 2017. We continue to wish them all the best and have appreciated their business. Their long anticipated move provided our company with a tremendous opportunity to attract new clients and work with existing clients to expand their relationship with us. For example, Citco is already a larger tenant at 5151 George Street than BMO. We will continue to promote our downtown locations as competitively priced, high quality commercial destinations for businesses to choose.

I guess that’s putting the best face on a bad situation.

I’ve been told that Wolfgang Thiel was so upset about what he saw as improper business dealings in Nova Scotia — not to mention a justice system that would turn a blind eye to that impropriety — that he up and left the province in disgust. Winchester confirms that Wolfgang Thiel has left, but again in  the most dignified manner possible:

Wolfgang moved back to his native Germany in June this year, now that the TD Centre redevelopment is wrapping up. He’ll continue to visit Halifax as work requires.

I read that as the project is on hold.

Yep, in the insistence on getting the convention centre done against all opposition, and damn the rules and regulations, full speed ahead, the province has managed to piss off a multi-gazillionaire who moved his family here to invest their fortune locally.

In a way this is funny. I’m repeatedly told that the goal is to encourage rich people to move here and that will lead to prosperity forever, amen, so I’m never to say a contrary word about rich people or question their motives. But the Thiels of the world don’t give two shits about some marginal journalist; what they want above all else is a place that respects the rules. It wasn’t me who ran the Thiels off; it was Nova Scotia’s business and political classes. 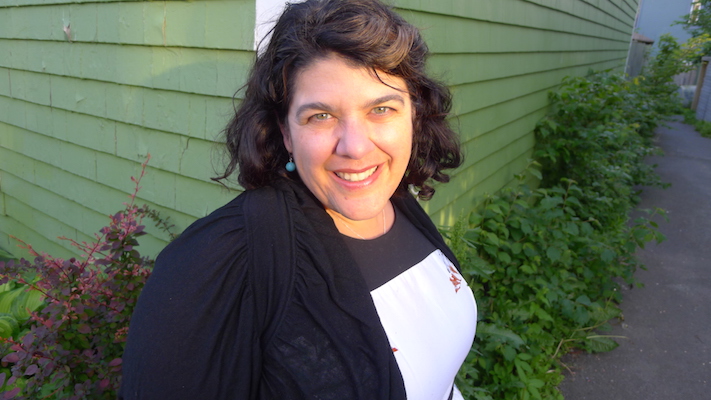 Stephanie Domet has announced she’s leaving CBC’s Mainstreet in order to concentrate on her writing — blame Old Man Luedecke. I don’t get to listen to much radio, but when I’ve been able to tune into Mainstreet I found it entertaining and informative, and Steph is one of the best interviewers I know. Good luck to her.

No one listens to me.

Also in line with Ivany recommendations, making the donair the official food of Halifax has the potential to assist in slowing our demographic decline.

I dunno, I can go either way on this. Cc’ing Norman Nahas was either the most brilliant satirical stroke ever, or an indication that Morgain is in fact serious. 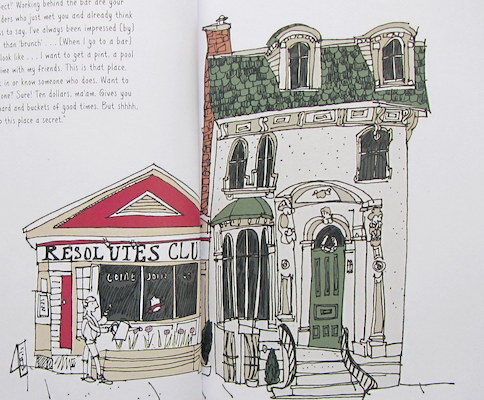 Just yesterday I dissed the Port Hawkesbury Reporter’s letter page as “so bad I don’t even go there anymore,” and yet of course I do and this morning I found this:

Jeannine Deveau recently gifted an $8 million endowment to StFX University, the largest private alumni donation of its kind in the university’s 163 year history. The Jeannine Deveau Educational Equity Endowment has the potential to grow to $13 million as $5 million of the endowment is a matching gift to other donations.

For the residents of Isle Madame and area this story is ironic in a number of ways. It is ironic in that Arichat is the birthplace of the institution receiving the endowment. It is also ironic that the birthplace of Jeanine Deveau was also Arichat. StFX was moved from Arichat to Antigonish and was followed there by an $8 million endowment. To use a sports analogy: Antigonish 2 Arichat 0.

What claim does this area have on the generosity of Ms. Deveau? Perhaps none, but many residents were disappointed that a native daughter, born and raised here, did not see fit to acknowledge and remember us as she did her alma mater.

Her father, Dr. G.R. Deveau, practiced medicine here for 46 years and is still fondly recalled by older residents. It was he who was instrumental in the founding of a hospital for the area, the Red Cross Outpost Hospital in 1946 which evolved into the St. Anne Community and Nursing Care Centre. He also served as Medical Health Officer and Port Physician. He even represented the people of Richmond from 1933 to 1937 in the Nova Scotia Legislature. Dr. Deveau, with his wife Marie Claire, raised five children here, Bernard, Gaston, Madeline, Lucille, and, of course, Jeannine.

Deveau, by acknowledging the medical needs of St. Anne Centre and the thousands who depend on it for care, would have established a lasting legacy for her father and herself and greatly enhanced medical services for the entire region, and I’m sure it is a legacy that Dr. Deveau would be proud of.

Heritage Advisory Committee (2pm, City Hall) — the committee consider the house at 2720 Gottingen Street as a registered historical property. I’ve read a lot of these applications, but never one so extensive as this. An interesting read, if you have the time. 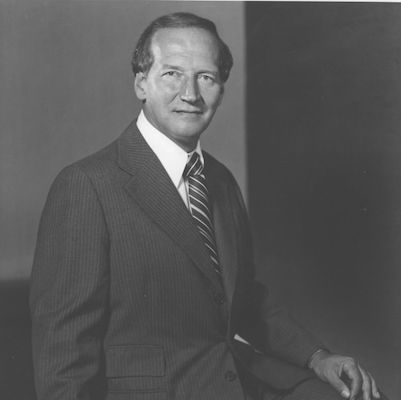 On this date in 1970, Gerald Regan’s Liberals won election and formed a minority government, thus beginning one of the most most corrupt regimes in the history of Nova Scotia, if not Canada. As described  in the Canadian Supreme Court decision, R. v. Barrow:

In October of 1970, the liberal party defeated the then Government of Nova Scotia in a general election and formed the new government which held power until 1978. During the period from 1970 to 1978, the Committee collected contributions amounting in total to $3,836,468.13, of which $2,770,773.52 was deposited in one bank account and $1,065,694.61 in the other. A police investigation commenced in the autumn of 1978 resulted in the seizure of many documents from government departments and agencies and also from several wineries, distilleries and other corporations. The evidence revealed that the contributions made by liquor and wine companies dealing with the government were based on a fixed amount per case of products sold to the Government. Other companies doing business with the government paid a percentage of monies they received from government work which ranged from three to five per cent.

[T]he Nova Scotia Liberal party perfected a lucrative if illegal fundraising scheme known as toll-gating. Companies wanting to do business with the government — from having their particular brand of booze stocked on liquor store shelves, to offering legal advice to crown corporations, to supplying the hamburger for the hash in local hospital cafeterias—knew they had to fork over a portion of the value of whatever they sold to their friendly Liberal fundraiser.

According to evidence presented at the 1981 influence-peddling trial of three prominent Liberal fundraisers, that party raised at least $4 million—and probably much more—from these illicit tolls alone during Gerald Regan’s eight years as premier (1970-78).

I’ll get into the sexual assault allegations some other day.

Decision theory (11am, MA310) — Somebody — I have no idea who, because the event listing doesn’t give the speaker’s name (which makes it really hard to decide whether the go, ya know?) — will be speaking on, yep, decision theory.

Social investments for health equity (6:30pm, Halifax Central Library) — John Fran, the Director of the Scottish Collaboration for Public Health Research and Policy, will speak. Robert Strang, the province’s Public Health Officer, will be on hand as well. 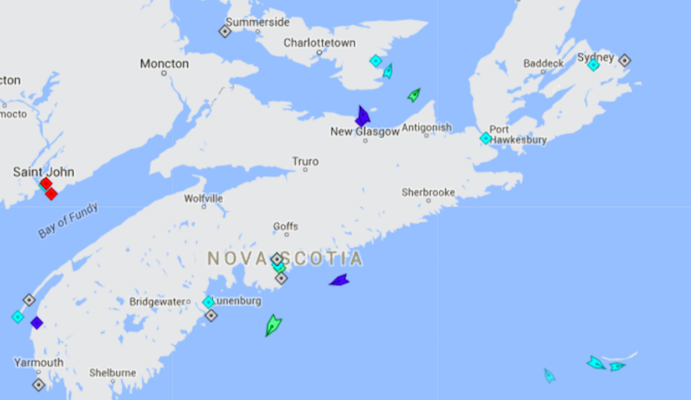 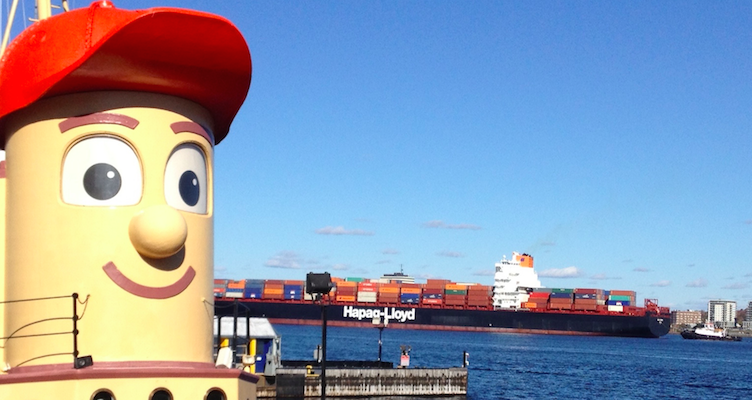 Theordore smiles upon the Halifax Express

The cruise ship Saint Laurent, with up to 200 passengers, is in port today.